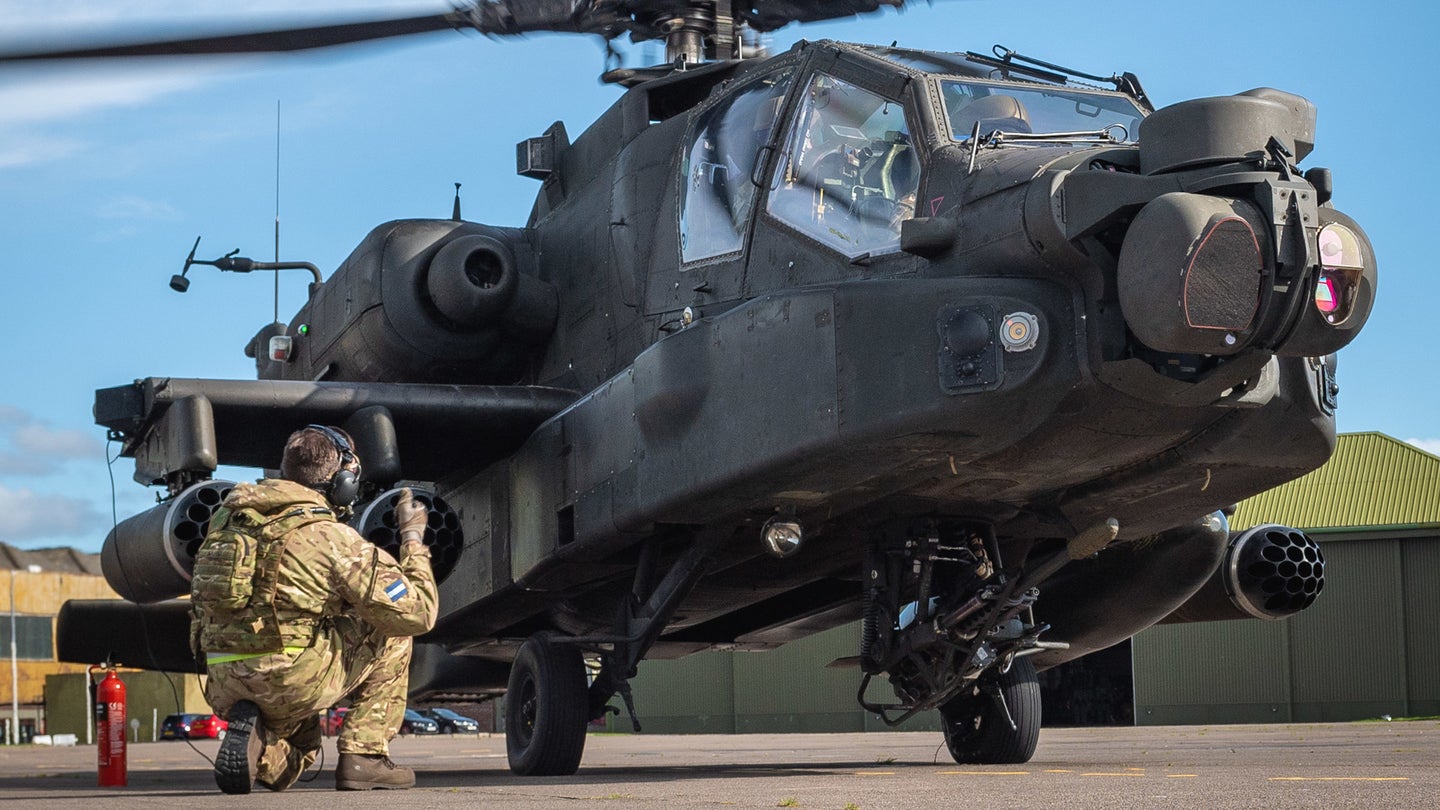 The British Army is investigating the apparent accidental discharge of the 30mm M230 automatic cannon on one of its AH-64D Apache gunship helicopters while it was undergoing repairs earlier today. There are no reports, so far, of any damage or injuries as a result of the incident, but there is a search underway for any remains of the shell, which was thankfully an inert practice type.

The incident reportedly took place at Wattisham Flying Station in Suffolk on Nov. 6, 2020. The AH-64D in question had returned to this base the day before after experiencing a malfunction with the gun during live-fire training. As such, it had been loaded with practice rounds, which have solid projectiles, rather than high-explosive or high-explosive-incendiary shells.

"We are aware of an incident at Wattisham Flying Station which is being investigated," a British Army spokesperson told Sky News.

The exact circumstances of the incident, including how the M230 went off, are still unclear. It's also not known if British Army personnel were actually working on the gun at the time of the discharge. There are unconfirmed reports that ground crew personnel at Wattisham had noted that an ammo counter on the helicopter had indicated there was still one more round in the gun, but had believed this to be in error and had reset it to zero.

The M230 is an electrically-driven chain gun that has one barrel, but uses a rotating mechanism that functions in a broadly similar manner to the rotating cylinder in a revolver. Ammunition is fed into the system at one end and rounds are fired as they align with the barrel, after which the mechanism continues to rotate and the spent cartridge cases are ejected. There is the potential for the weapon to fire accidentally if a live round is moved into the firing position.

There is also the possibility that whatever the nature of the malfunction was with the gun the day before had resulted in a misfired round stuck somewhere in the action, which subsequently went off as work began on the helicopter or due to a shock from it being moved out of a hangar at Wattisham where it had been reportedly sitting overnight. There could be other explanations for the mishap, as well.

In addition, while it's certainly good that the helicopter wasn't carrying high-explosive or high-explosive-incendiary shells, the 30mm practice ammunition for the M230 is designed to have the same ballistic performance as those other rounds for training purposes. This means the steel-cored projectile they do fire still goes flying out the barrel at around just over 1,800 miles per hour and has an effective range of just over 1.8 miles.

The shell could still have done significant damage or caused fatal injuries had it struck something. It makes good sense that the British Army is trying to ascertain exactly where it went to make sure nothing happened.

This is not the first time an accidental discharge of a military aircraft or helicopter's cannon on the ground. In 2018, the 20mm M61 Vulcan cannon on a Belgian F-16AM Viper went off during an apparent inspection. In that incident, the weapon was loaded with high-explosive rounds ahead of an upcoming sortie and the cannon fire destroyed another F-16AM and damaged a third, and left two ground crew personnel injured.

These kinds of accidents are limited to accidental discharges from guns, either. In April, an unguided rocket went flying from a pod under the wing of a Chadian Air Force Su-25 Frogfoot ground attack aircraft sitting on the tarmac at its base in the country's capital N'Djamena. That projectile narrowed missed a nearby French Air Force C-130H Hercules transport aircraft, passed through a thankfully empty fuel truck, but then flew into a house and killed four innocent bystanders.

Mishaps like this don't have to happen on the ground, either. In 2018, the pilot of a Spanish Air Force Eurofighter fighter jet accidentally fired one of his aircraft's AIM-120 Advanced Medium-Range Air-to-Air Missiles (AMRAAM) during a NATO Air Policing patrol over Estonia.

It also recently emerged that the U.S. Air Force had to revise the rules and regulations regarding strafing training for its F-16 Vipers following a fatal accident in 2017. In that incident, a pilot accidentally identified a line of rental cars as a set of mock targets during a nighttime training sortie and engaged them with their Vulcan cannon, killing a contractor. The U.S. government subsequently paid nearly $25 million to the family of the late retired Master Sergeant Charles "Chuck" Holbrook after they won a lawsuit over his wrongful death.

Thankfully, so far, it appears that this accidental discharge of an Apache's M230 cannon in the United Kingdom has not resulted in any damage, let alone injuries or fatalities.