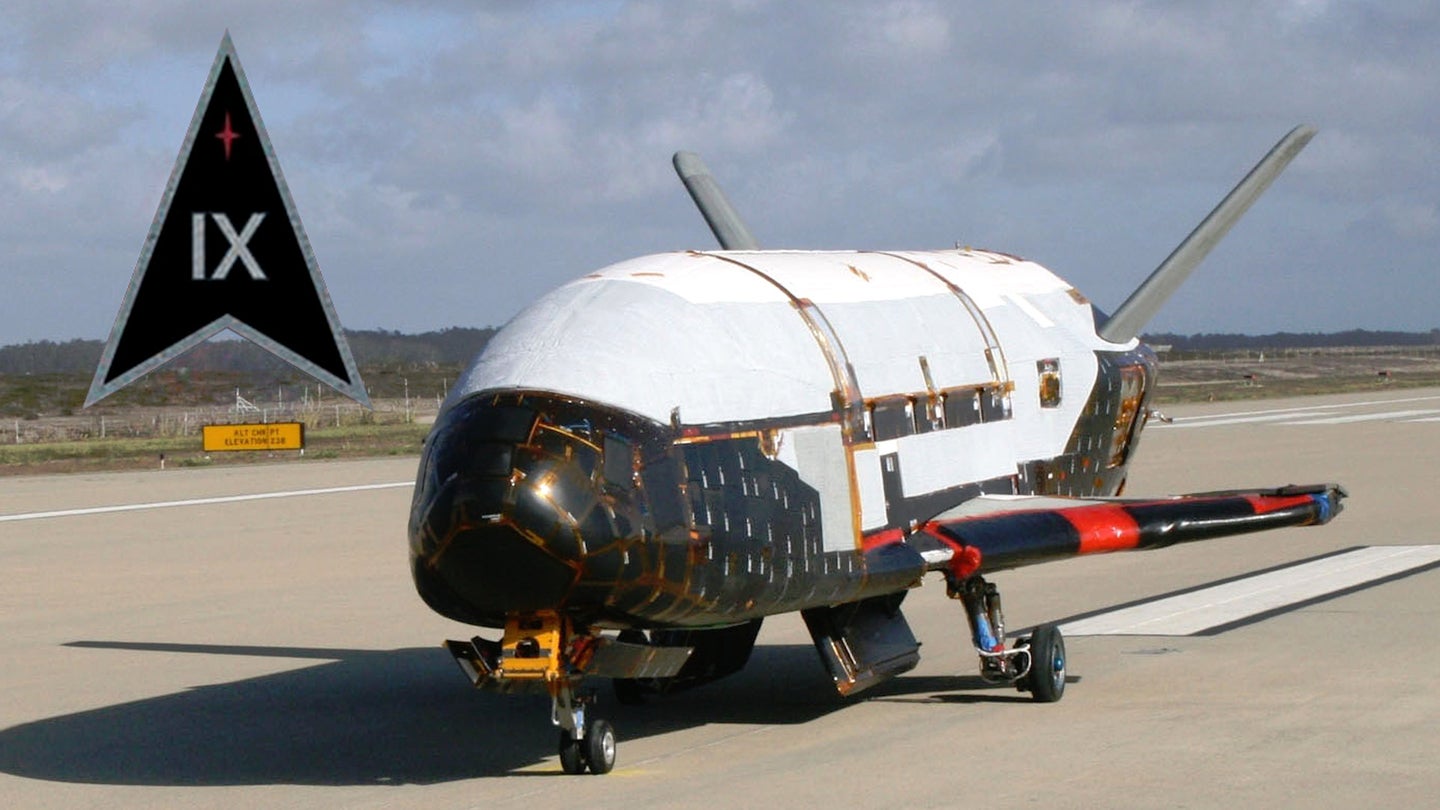 The fledgling U.S. Space Force's Space Delta 9 is tasked with performing a mission set that the service describes as orbital warfare. This includes keeping an eye out for potentially hostile activity in space, as well as deterring those threats and even potentially defeating them, according to the unit's official website. Publicly, it provides this support primarily through various space-based surveillance and communications systems, but, interestingly, it is also responsible for overseeing the operations of the experimental X-37B mini space shuttle, the exact mission and capabilities of which remain obscure.

Space Force highlighted the intriguing orbital warfare mission of Space Delta 9, as part of the larger array of capabilities within its new Space Operations Command (SpOC), in a Tweet earlier this week. The unit had first come into existence in July and had previously been known as the Air Force's 750th Operations Group, which had only been activated and assigned to that service's 50th Space Wing the month before. 50th Space Wing, headquartered at Schriever Air Force Base in Colorado, was also transferred to the newest branch of America's armed forces that month, at which time it was rebranded as the Peterson-Schriever Garrison.

Space Delta 9 "conducts protect and defend operations from space and provides response options to deter and defeat adversary threats in space," according to an infographic that accompanied the Space Force Tweet on Oct. 24. "The mission of Delta 9 is to prepare, present, and project assigned and attached forces for the purpose of conducting protect and defend operations and providing national decision authorities with response options to deter and, when necessary, defeat orbital threats," is how the unit's official website describes it. It also shows the unit's insignia, which is distinct from those of the other deltas, and simply features the roman numeral "IX" for nine in silver along with a single red star at the top, all on a black background.

Publicly, the 1st Space Operations Squadron operates a constellation of space-based surveillance satellites, including the Space Based Space Surveillance System (SBSS), Advanced Technology Risk Reduction (ATRR) system, Operationally Responsive Space-5 (ORS-5), and the Geosynchronous Space Situational Awareness Program (GSSAP). SBSS, launched in 2010, was the U.S. military's first space-based sensor specifically designed for "Space Domain Awareness," or SDA, and is capable of "metric observations and Space Object Identification data on satellites operating in low-earth, semi-synchronous and geosynchronous orbits," according to the squadron's official website. The year before, the Air Force had worked with the Missile Defense Agency (MDA) to launch the ATRR satellite, which is also now used for SDA, but originally "served as a pathfinder for next-generation sensor technology for future MDA space missions."

The GSSAP satellites, the first two of which reached orbit in 2014, "provide a space-based capability operating in the near-geosynchronous orbit regime supporting U.S. Space Command space surveillance operations as a dedicated SSN [Space Surveillance Network] sensor." The SSN includes space and ground-based systems to monitor activity in the upper reaches of the Earth's atmosphere and beyond.

The ORS-5 satellite, also known as SensorSat, which was launched in 2017 and reached full operational capability last year, "operates at an altitude of 372 miles and continuously scans the geosynchronous orbit at a reduced cost compared to larger, more complex satellites." An Air Force news story from last year said that "it detects, tracks and catalogs man-made objects orbiting Earth such as active and inactive satellites, spent rocket parts and fragmentation debris, informing military, civil and commercial space operators if tracked objects may interfere with the satellites on orbit" and can also predict "when and where decaying space objects are located and where they may re-enter the Earth's atmosphere."

The 750th Operational Support Squadron provides training and readiness support across Space Delta 9. It also provides intelligence support, as well as helping to refine existing tactics, techniques, and procedures and develop new ones.

Lastly, and certainly most interestingly, is Space Delta 9's Detachment 1. While the exact ownership of the X-37B has been at the center of some jockeying between the Air Force and Space Force, this is the unit that oversees its operations once it gets into orbit. This secretive spaceplane has been the topic of much discussion and speculation as to its role since it first began making trips into space in 2010. This has including talk of whether it might carry, or at least be used to test, space-based weapons, including directed energy systems, such as laser or high-power microwaves.

The address of the Detachment's official website also indicates that it is in some way related to the Air Force's previous 3rd Space Experimentation Squadron and the unit's official history includes achievements from before Space Force was established. This includes operating the Automated Navigation and Guidance Experiment for Local Space (ANGELS) spacecraft until it was decommissioned in 2017. Detachment 1 was said to be set to take over the Evolved Expendable Launch Vehicle Secondary Payload Adapter Augmented Geosynchronous Laboratory Experiment, or EAGLE, from the Air Force Research Laboratory this year.

ANGELS was an "experimental spacecraft [that] utilized autonomous navigation to advance the tactics, techniques and procedures necessary to safely conduct rendezvous and proximity operations," according to the Detachment's website. EAGLE is a ring-shaped payload adapter that can maneuverable by itself once reaching orbit and is capable of hosting six fixed or deployable payloads. Launched in 2018, one of EAGLE's payloads was the Mycroft spacecraft, which had a mission to "advance Space Domain Awareness technology and enhance space object characterization capabilities while performing rendezvous and proximity operations."

Small satellites that can rendezvous with and maneuver very close to other satellites could be used to perform on-orbit inspections and potentially repairs, among other innocuous tasks. However, they have inherent intelligence-gathering and anti-satellite capabilities, as a result, as well. A small satellite that could get in close proximity to another one could be able to collect imagery or gather electronic signals data on that target, as well as potentially blind, jam, disable or destroy it using non-kinetic or kinetic attacks, including just smashing into it. This concept is sometimes referred to as a "killer satellite" and is a capability the U.S. government has said that Russia, as well as China, are actively developing.

It's important to note that Space Delta 9's mission set also includes conducting "on-orbit experimentation and technology demonstrations for the U.S. Space Force," according to its official website. Still, it's notable that those tasks, broadly, and the X-37B, specifically, as well as EAGLE, are housed within a unit focused on orbital warfare that has a stated, if not defined capability to not only watch for, but actively defeat threats in space.

The Air Force, and now the Space Force, has been very tight-lipped over the years about what it describes as "counterspace" capabilities. At present, only three such systems – the Counter Communications System (CCS), Meadowlands, and Bounty Hunter – have been publicly acknowledged and very few details about them exist. CCS, the latest version of which Space Force reached initial operational capability with earlier this year, is understood to be a ground-based communications jamming system. Meadowlands is a successor to CCS that is now in development. Bounty Hunter, which also appears to be ground-based, has been described as an "electronic warfare system," but its exact function and capabilities are classified.

We also know that Space Force is working together with the National Reconnaissance Office (NRO), the U.S. government's top satellite intelligence arm, to develop a new space-based sensor, called Silent Barker. Details about this satellite, which is scheduled to head into space in 2022, are also limited. It will reportedly combine intelligence-gathering and surveillance capabilities with an eye toward threats and other objects of interest in space as part of the "protect and defend" mission that Space Force says is at the core of its orbital warfare concepts of operation.

It remains unknown whether or not the X-37B has been employed to evaluate any counterspace systems, but its highly adaptable truckbed-like payload bay could be very useful for accommodating experimental concepts in this regard. It is also known to be extremely maneuverable, which would be in line with Detachment 1's other work on EAGLE and its predecessor organization's involvement with ANGELS. We also don't know whether the U.S. military has any other on-orbit anti-satellite capabilities, though there has been active public discussion of developing such systems in recent years.

At the same time, the Air Force, as well as now the Space Force, have alluded to the existence of additional counterspace capabilities on multiple occasions in recent years. In 2015, U.S. Air Force General John Hyten, then-head of Air Force Space Command, said that his service had more ways to fight in space beyond just maneuvering friendly satellites out of harm's way and jamming hostile ones in an interview with CBS News' "60 Minutes," but said he couldn't elaborate. Hyten is now the Vice Chairman of the Joint Chiefs of Staff.

Just last year, then-Secretary of the Air Force Heather Wilson said that “there may come a point where we demonstrate some of our capabilities so that our adversaries understand they cannot deny us the use of space without consequence." Opponents "need to know there are certain things we can do, at least at some broad level, and the final element of deterrence is uncertainty," she continued.

There have also been a number of calls to declassify more about U.S. military's space-based systems and what they can do, regardless of whether they are weapons or not.

Whatever the counterspace capabilities available to Space Delta 9 might be, and how the X-37B might fit into that ecosystem, the threats to American space-based assets are very real now and are only continuing to grow, as The War Zone has highlighted on numerous occasions. In addition to the aforementioned killer satellites, Russia and China are developing a host of other anti-satellite technologies including ground-based and air-launched interceptors and directed energy weapons. In July, Time published an interview with Chief of Space Operations General John "Jay" Raymond, Space Force's top uniformed officer, in which he publicly asserted for the first time that Russia had tested an on-orbit anti-satellite interceptor, as well.

Other countries have also demonstrated anti-satellite or other counterspace capabilities or say they are in the process of developing them for both offensive and defensive purposes. In addition, where the thresholds might be for a war in space, or fight in space as part of a primarily tertiary conflict, to erupt, and how to prosecute such a conflict, remain largely undefined, but Space Force is actively trying to figure out those concepts of operation now.

No matter what, Space Delta 9, and the X-37B, look set to be central components for this rapidly evolving notion of orbital warfare.