SOCOM's tricked-out Polaris ATVs are getting their fight on against ISIS. 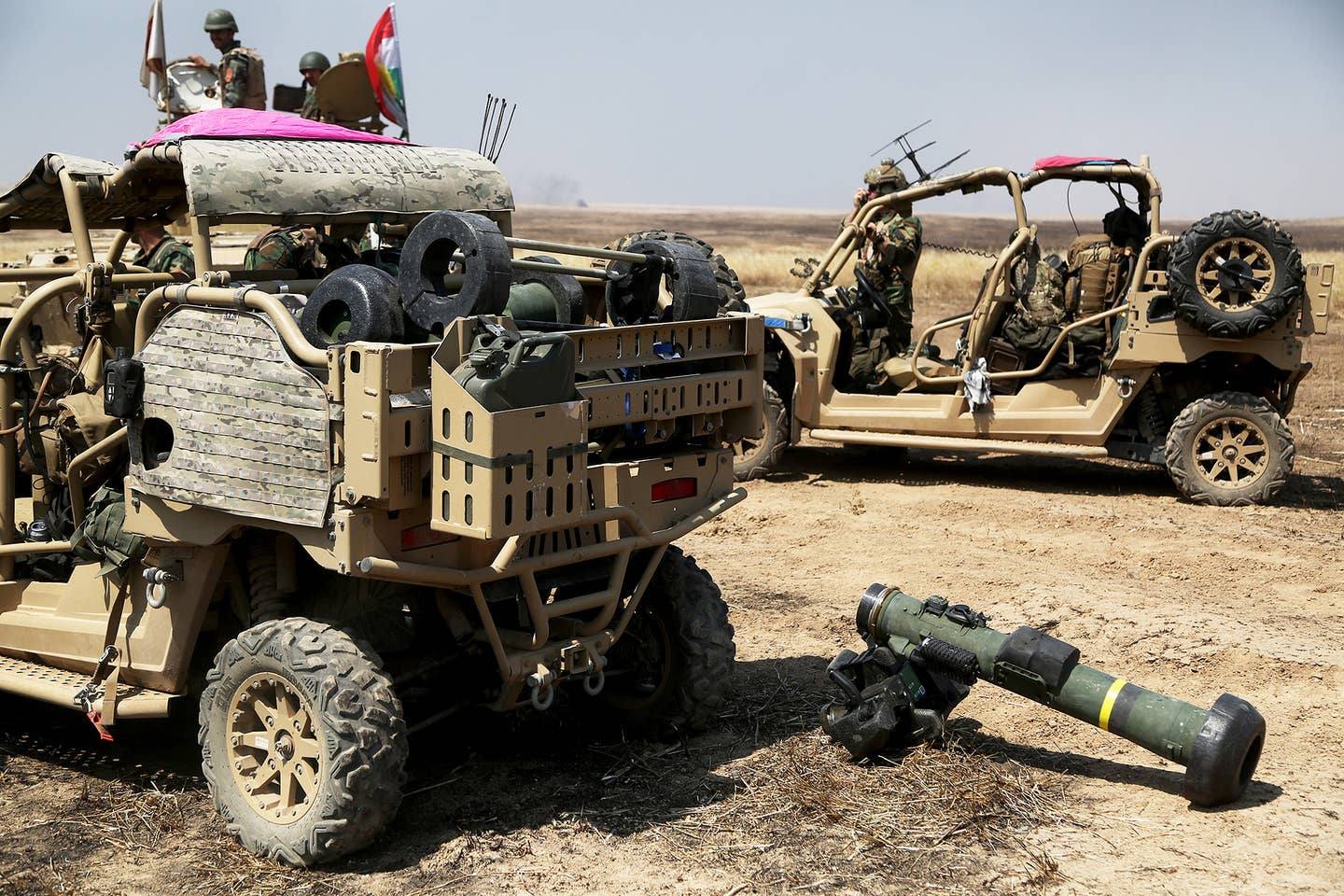 Special Operations Command is totally bullish on its MRZR tactical all-terrain vehicles. 2,000 of these hardy little buggies were ordered in 2015 to supplement a smaller fleet. Now they are popping up in some of the most dangerous places on the planet—and taking on some of America's worst enemies.

Last December, MAZRs were spotted during a botched arrival of US special operators in war-torn Libya. Now they're on the front lines in the fight against ISIS in Iraq, near the sacked city of Mosul.

In the photo above, the MAZRs look like they have been used frequently by their special forces operators, with some visible ad-hoc modifications. Most notably an FGM-148 Javelin missile system, which you can see on the ground behind the closest MAZR. A bunch of Javelin missile containers, most seemingly empty, are strewn in its rear cargo basket.

The special forces operators, likely Green Berets, are wearing the same uniforms as the Kurdish Peshmerga fighters they are there to "train and advise." By all appearances, these guys are doing far more than that, and slinging $75,000 missiles—well, $200,000 with the reusable targeting unit—certainly has little to do with "training and advising."

Bringing the Javelin, with its multiple attack modes, relatively long-range and thermal optics targeting system, to the fight alongside the Kurds is like bringing an F-22 to an airshow in the 1960s.

The Peshmerga fighters are seen with light machine guns, dated anti-aircraft artillery cannons (which are being used for direct fire), light artillery, mortars, some antique T-54/55 tanks and a spattering of Humvees and Toyota SUVs. It's not exactly a cutting-edge ground force.

The Javelin, on the other hand, offers a hard-hitting precision engagement capability without having to field modern armor or attack helicopters. Operated by American special forces on the front lines, the Javelin gives the Peshmerga force an asymmetric advantage.

Special forces in unarmored all-terrain buggies loaded with hi-tech Javelin missiles to support a far less equipped indigenous force is the epitome of the "small footprint, big punch" concept that these unique warriors bring to the table. Paired with strategy and tactics consulting, training and the ability to call in precision fire-support—not to mention each operator's own combat capabilities—and you have yourself a massive force multiplier.

Still, the idea that the Obama Administration claims our troops are not in a combat role in Iraq, even after the evidence has shown just the opposite, and not just regarding special forces, is a political scam that needs to come to an end. Ideally, this would also come with a much needed change in strategy—an unlikely pivot until a new President is sitting in the Oval Office.

Images of US special forces operating in Syria and Iraq have created some controversy. Recently, American soldiers were photographed wearing a YPJ patch. Of course, when a soldier embeds with an indigenous military force, the Green Beret's winning playbook oten involves wearing local garb, but the YPJ is the all female Kurdish militant force, part of the Kurdish Worker's Party (PKK).

The PKK is Turkey's bitter enemy, one classifed as a terror organization by the Turks as well as the United States. They are also the most effective anti-ISIS fighters on the planet. Obviously, Turkey is incredibly pissed that a fellow NATO member state's top-tier special forces have a soldier rolling around in Syria with a big YPJ patch on his arm—and so are US commanders.

"Wearing those patches was unauthorized and inappropriate and corrective action has been taken. We have communicated as much to NATO ally Turkey."

The soldier wearing the patch was not punished apparently, but obviously his symbol of solidarity was not worth the potential geopolitical ramifications, at least in the eyes of US commanders. The reality is that YPJ and YPG units are absolutely key players in the Syrian Democratic Force which is made up of a consortium of local groups of various religious backgrounds, all aimed at taking out ISIS.

This umbrella group, that the US is directly backing, including with precision air strikes, is now fighting north of the ISIS capital of Raqqa, with their eyes set on liberating the city and crushing ISIS's claim on a Caliphate once and for all. And yes, there are almost certainly US special operators fighting right alongside them.

So patches are not ok, but supplying arms to, backing with airstrikes and even having America's top warriors fighting alongside YPJ fighters is.

Talk about one tangled web.