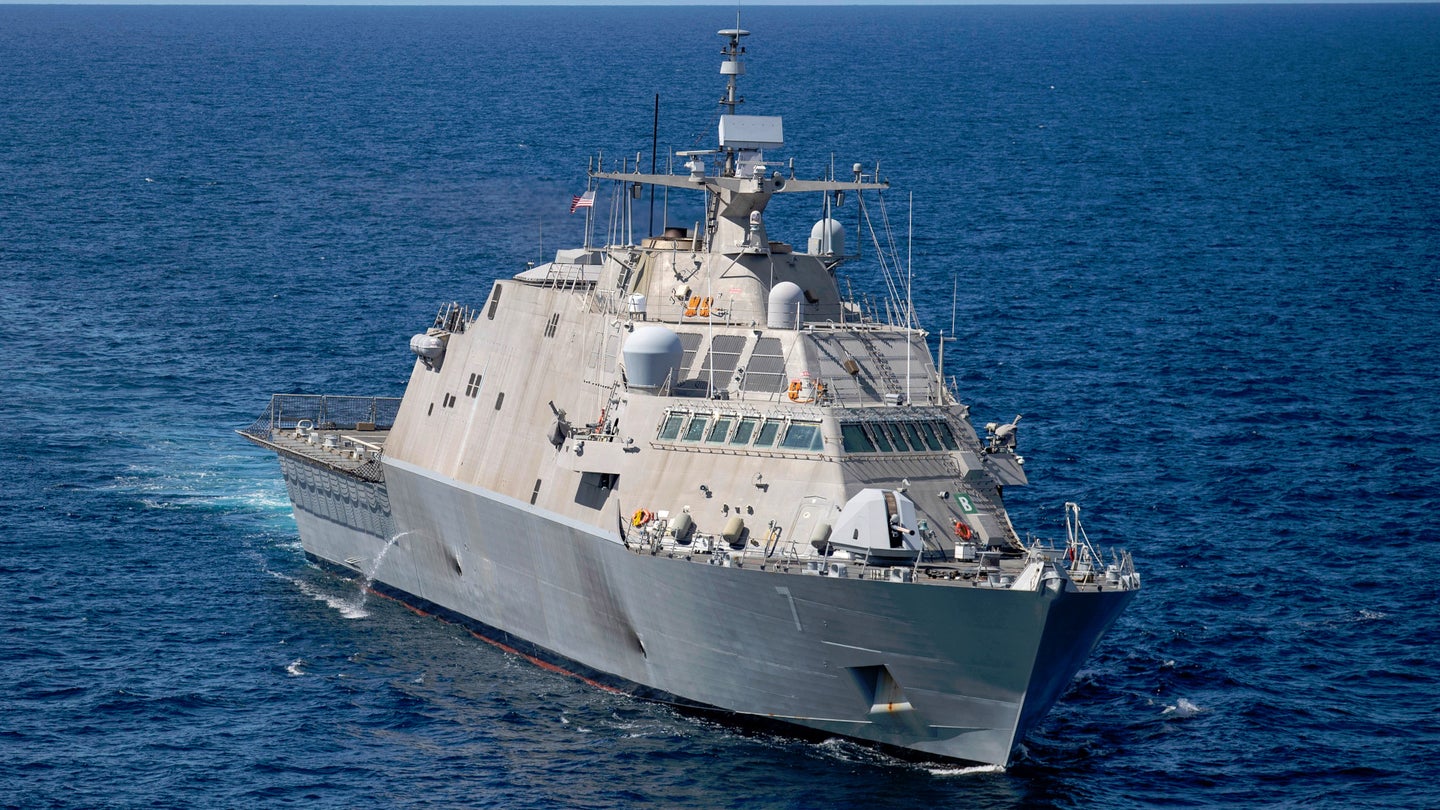 The U.S. Navy's Freedom class Littoral Combat Ship (LCS) USS Detroit is making its way slowly back to its homeport in Florida after suffering a significant breakdown while operating in the waters around Latin America. The ship had stopped to conduct scheduled maintenance in Panama earlier this month, though there is no indication that work during that port visit had to do with parts of the ship's propulsion system that subsequently failed. The incident underscores continuing issues with both of the Littoral Combat Ship subclasses, which have bedeviled the overall program for years and limited the operational utility of these ships, despite the Navy's best efforts.

The combining gear links the two main diesel engines on the Freedom class ships to a pair of gas turbines, which can provide additional power for its water jet propulsion system. This combined system is key to the ability of these ships to reach speeds of over 40 knots, which was a core requirement when the ships were under development. On diesel engine power alone, their top speed is only around 10 to 12 knots.

It's not clear how the combining gear failed in this case or when or where exactly the breakdown happened. Detroit had been operating in the U.S. 4th Fleet area of responsibility, which includes the Caribbean and areas of the South Atlantic and Eastern Pacific Oceans, in support of U.S. Southern Command's Enhanced Counter Narcotics Operations effort, which began earlier this year. The USS Sioux City, another Freedom class Littoral Combat Ship, as well as the Independence class LCS USS Gabrielle Giffords, are also presently deployed to the region primarily to support this counter-drug operation.

"USS Detroit (LCS 7) experienced an engineering casualty during routine operations, and a technical evaluation determined that in-port repairs would be required," the Navy's statement to Defense News read. “USS Detroit has been a vital and productive asset and will be redeployed as soon as possible."

It's interesting to note that the Navy had previously released pictures of Detroit in port in Vasco Nunez de Balboa in Panama on Oct. 10, 2020. The ship was reportedly there for a planned maintenance availability period (PMAV). Some of these images show members of the ship's crew working on one of the ship's four auxiliary diesel generators, which power its electrical systems, as well as the fuel system.

This is not the first time a Freedom class LCS's combining gear has failed. In 2015, the USS Milwaukee

The next year, USS Fort Worth had experienced a significant breakdown in its combining gear, as well. The Navy subsequently determined that incident to have been the result of a chain of errors by the crew that resulted in the system running for an extended period without critical lubricating oil.

The Independence class LCSs, which are of a distinctly separate design, have also suffered their issues over the years with their propulsion systems. Ships from both subclasses have been involved in various collisions, over the years, as well.

The Navy is well aware of the reliability issues across the two fleets, which has contributed to the Navy having conducted very limited operational deployments using any of these ships since the first-in-class USS Freedom, also known as LCS 1, was commissioned more than a decade ago. In 2018, no LCSs from either subclass were deployed operationally anywhere.

"There are things in the near term that I have to deliver, that I’m putting heat on now, and one of them is LCS,” Chief of Naval Operations Adm. Michael Gilday, the service's top officer, told Defense News in an interview earlier this year. "One part is sustainability and reliability. We know enough about that platform and the problems that we have that plague us with regard to reliability and sustainability, and I need them resolved."

"Those platforms have been around since 2008 – we need to get on with it," he continued. "We’ve done five deployments since I’ve been on the job, we’re going to ramp that up two-and-a-half times over the next couple of years, but we have got to get after it."

In late September, the Navy kicked off its latest initiative to try to help mitigate these issues when it sent the Spearhead class expeditionary fast transport USNS Burlington to the U.S. 4th Fleet area to serve a mothership for Detroit and the other LCSs in the region. As part of this proof-of-concept deployment, Burlington has a Maintenance Expeditionary Team onboard that can help perform PMAV work at sea, meaning the LCSs would not have to head to a port to conduct at least some routine maintenance.

Still, even if the Navy can overcome the maintenance-related issues with the LCSs, there remain serious questions about the operational utility of these ships, too. The vessels were originally developed to be modular designs that could use prefabricated mission modules to rapidly shift from one mission set to another. The three planned mission modules are centered on the mine countermeasures, anti-submarine warfare, and anti-surface warfare missions. However, after years of delays and other setbacks in fielding the modules, the service now plans to operate the LCSs in single-mission roles with one of this trio of mission modules effectively permanently installed.

The base combat capabilities of the ships in both subclasses have also been the subject of significant criticism over the years. At present, a Navy initiative to give them an over-the-horizon anti-ship missile capability, which could significantly increase their firepower, has resulted in the integration of the RGM-184A Naval Strike Missile (NSM) onto just one ship, the Gabrielle Giffords. Adding the NSMs to the LCS's arsenal is becoming something of a saga that you can read more about in this past War Zone piece. There is also talk now of adding laser directed energy weapons to at least some of these ships.

Beyond all that, both LCS subclasses were originally developed using a process known as concurrency, wherein shipbuilders began construction of the initial ships before designs had been entirely finalized, with plans to insert any modifications and fixes later. This concept, applied to other shipbuilding programs, as well as combat aircraft, was ostensibly meant to help cut costs by getting production started sooner than it would otherwise, but didn't result in the desired savings. In addition, this has meant that the first two LCSs in each subclass are so significantly different from their sister ships that they have been relegated to purely training and test and evaluation roles and the Navy is now looking to retire them entirely.

The Navy operates the LCSs using a dual-crew concept, meaning that there is a blue crew and gold crew that alternate on the ship. The idea here had been to improve readiness, but in practice has often led to certain ships taking on significant training duties to ensure non-deployed crews are certified for future operations.

Many of these issues had already been key factors in the Navy's decision to initiate plans to acquire a new class of more capable frigates. In April, the service announced it had hired Marinette Marine, a subsidiary of Italian shipbuilder Fincantieri to build the first of these ships, which will be based on its parent company's Franco-Italian Fregata Europea Multi-Missione (FREMM), or European Multi-Mission Frigate, design. More recently, it was announced that the first of these ships would be named the USS Constellation, a storied moniker that was originally applied to one of the first six frigates built for the fledgling U.S. Navy in the late 18th Century.

Despite all these issues, the Navy has continued to buy more LCSs, too. At the time of writing, the service has taken delivery of 21 ships in both subclasses and could eventually receive a total of 38 examples. The future USS Minneapolis-Saint Paul just completed its acceptance trials in August. At the same time, Questions about the actual operational utility of these ships now and in the future are likely to become even more significant in the near term as the Navy works to implement its questionably ambitious plans to increase the size of its overall fleet to more than 500 ships, which you can read more about in these previous War Zone stories.

Hopefully, when it comes to USS Detroit, the ship's engineering casualty will turn out to not have been particularly severe and the ship will at least be able to return to the fleet sooner rather than later.

The future USS Billings is now tied up in Montreal while the Navy assesses the full extent of the damage and investigates what happened.