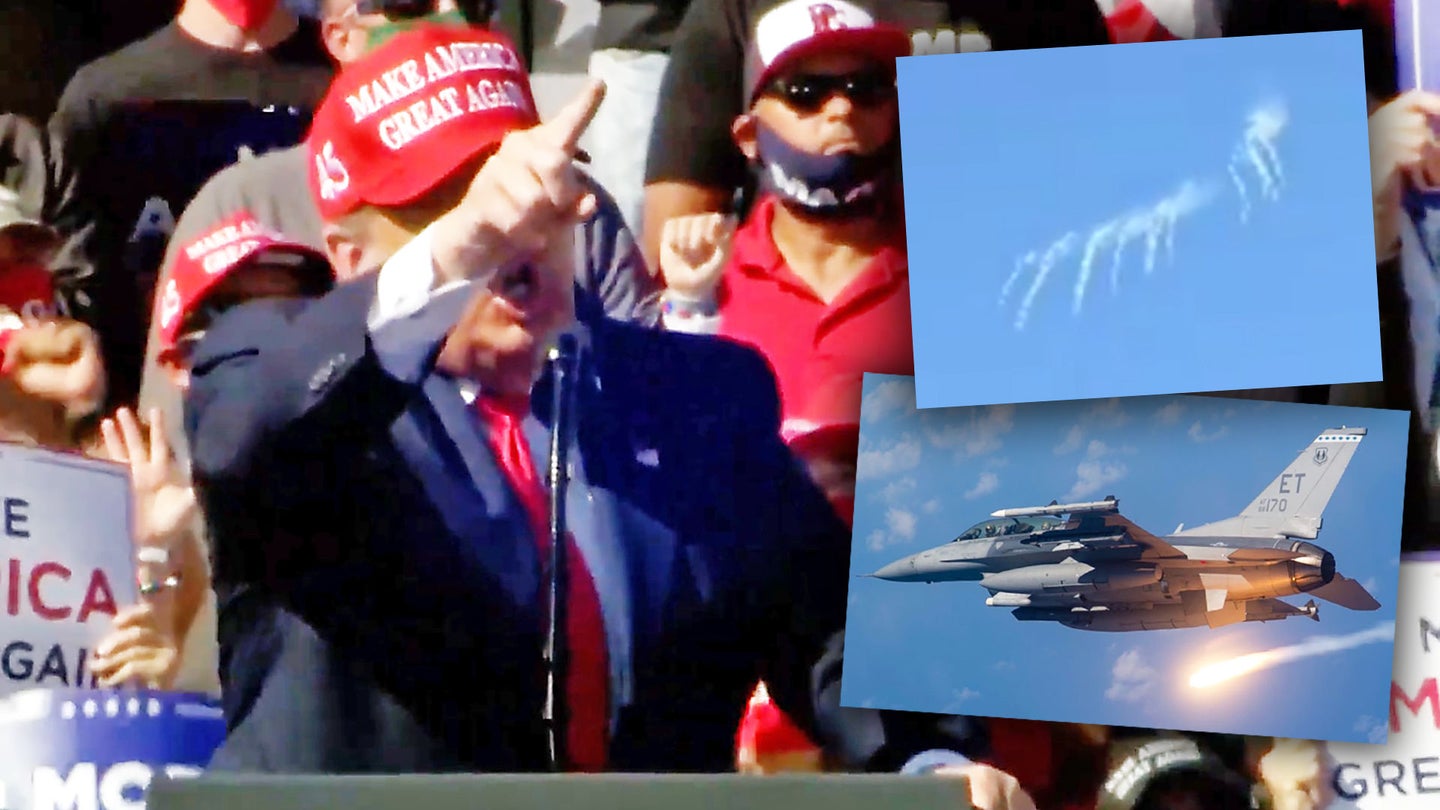 A U.S. Air Force F-16 Viper fighter jet fired off flares to get the attention of another aircraft that had flown into restricted airspace around where President Donald Trump has been holding a campaign rally in Bullhead City, Arizona. The exact circumstances remain unclear, but the other plane subsequently established radio communications with the fighter and was escorted out of the area without further incident.

The intercept occurred while Trump was speaking in Bullhead City, which is situated just over the Arizona border, where he arrived today after making an earlier stop in Las Vegas. The F-16's appearance overhead deploying flares was clearly not planned and came as something of a surprise to the President, as you can see in the video below.

Even though they did not know what was going on, the crowd, as well as the President, were clearly thrilled by what they saw. "I love that sound. You don't know what I went through to get those suckers up there," Trump said, before attacking unspecified "Democrats" over budgeting, on first hearing the aircraft. "Oh, look at that, look, look, look, they gave the president a little display," he continues after the flares appear.

"At approx. 1400 MDT, NORAD F-16 aircraft investigated a general aviation aircraft that was not in communication with ATC [air traffic control] and entered the Temporary Flight Restriction area surrounding Bullhead City, AZ without proper clearance," the U.S.-Canadian North American Aerospace Defense Command (NORAD), said in a pair of subsequent Tweets. "The violating aircraft was non-responsive to initial intercept procedures, but established radio communications after NORAD aircraft deployed signal flares. The aircraft was escorted out of the restricted area by the NORAD aircraft without further incident."

The use of flares by fighter jets to get the attention of other planes or helicopters, including those that might have strayed into this kind of restricted airspace, if they can't contact them over the radio, visually, or otherwise get them to leave, is not all that common. You can read more about what goes into an intercept like this in this previous War Zone piece, but the use of flares was likely necessary to get the aircraft's attention fast enough so as to ward it away from where the President was speaking in time to not turn the incident into a deadly one. The restricted airspace around the President offers only a short amount of time to get an aviator that wonders into the area time to leave without the use of force.

There was actually a similar intercept involving the deployment of flares in Tennessee last week, in the restricted airspace around Nashville, which was the site of the final debate between President Trump and his challenger, former Vice President and Senator Joe Biden. A F-16 escorted another aircraft out of the area, as well, but did not fire flares to get its attention first. Both of those incidents also ended uneventfully.

The presence of hardware overhead for Presidential visits outside of Washington has increased markedly in recent years. At many locales, fighters are airborne constantly, supported by tankers, around the clock to provide a combat air patrol (CAP) to enforce a temporary no-fly security zone around the President. During the campaign, there have been E-3 AWACS aircraft also up at multiple destinations to help provide surveillance and additional command and control. In years past, CAPs have not been set up at some destinations, which has resulted in supersonic scrambles by alert fighters in the region to confront threats that pop-up even hundreds of miles away. These incidents have led to property damage and a concerned populous. Having fighter aircraft constantly overhead is extremely expensive and time-consuming, but it offers far quicker response times to potential threats. Even at Trump's Florida home, Air Force fighters stand vigilant around the clock overhead in case a threat emerges.

As the President has moved around the country at breakneck speed for the last weeks of his campaign, a logistical operation the likes of which has likely never been executed by the USAF before has been put into place in order to move him safely where he needs to go and to guarantee his safety from airborne intruders once he is there.