The red and black helicopter that was owned by the 45th President and starred in The Apprentice is now for sale. 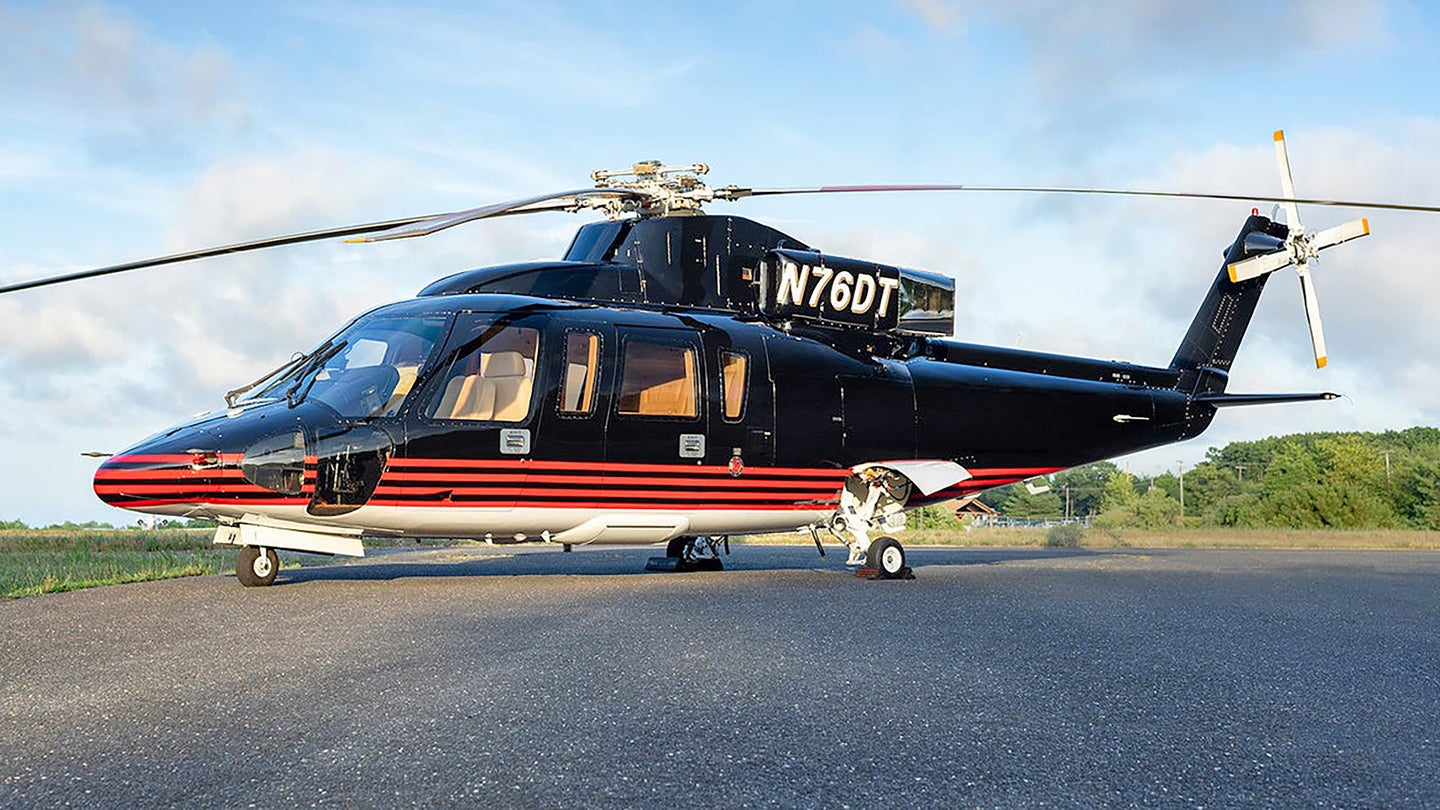 President Donald Trump's most iconic Sikorsky S-76B helicopter is now up for sale. Through stripped of the large "TRUMP" in white letters on the tail boom, pictures of the helicopter show it still has its distinctive Trump Organization paint scheme of black-over-white with red cheatlines, as well as its lavish VIP interior with gold trimmings.

Toronto, Canada-based Aero Asset, together with Jet Edge Partners in the United States, are selling the helicopter, which still carries the U.S. civil registration code N76DT, a clear reference to its famous owner. The S-76B itself is said to be in Trenton, New Jersey, awaiting its future buyer. Anyone who's interested will have to call to inquire about the asking price or make an offer.

A 2016 story from The New York Times said the helicopter was valued at approximately $875,000, which looks to be about right based on the available comps, but that doesn't take into account that it was owned by a television star whose now the 45th President of the United States. It was also a star in its own right, being repeatedly featured in The Apprentice, including during the opening titles.

This particular S-76B came off the line at Sikorsky, which is now a division of Lockheed Martin, in 1989, two years after the type first hit the market. The company had introduced the original S-76A in the late 1970s. N76DT, which also has the serial number 760351, has just under 6,260 flight hours on the airframe.

The improved S-76B, an outgrowth of a helicopter Sikorsky originally marketed as the S-76 Mk II, had more powerful engines, as well as improved avionics and other upgrades that allowed for true all-weather operation. S-76 series helicopters, including further improved S-76C variants, have seen some use with militaries and other security forces. However, they have long been a go-to choice for VIPs, including notable business figures, such as Trump, and other celebrities, and even heads of state and royalty, including the Queen of England. Kobe Bryant, his daughter Gianna, and seven others tragically died when the S-76B they were traveling in crashed earlier this year.

N76DT still has a pair of Pratt & Whitney PT6B-36A turboshaft engines, which were found on early S-76Bs, instead of the PT6B-36Bs found on some later examples. This helicopter has received other upgrades more recently, as well, including the addition of a Garmin GMX-200 digital multi-function display in the cockpit.

Of course, the big draw for anyone interested in buying N76DT will be the luxurious interior, which seats six in leather-covered seats with actual gold seatbelts. There is various other gold fittings inside the cabin, a Trump hallmark, as well as various features with African Mahogany veneers.

The full list of amenities, according to Aero Asset, is as follows:

It's not necessarily surprising that Trump is selling this S-76B, which is one of three he has owned, along with various other aircraft, for years now and appears to be the one he has had the longest. It's not clear when he acquired this helicopter, but he bought the second S-76B, a 1990 production example, in 2012, which was registered first as N76TE. Trump had that helicopter shipped to the Trump Turnberry Resort in Scotland in 2015, after which it was subsequently re-registered in the United Kingdom with the U.K. civil registration code G-TRMP.

In 2014, Trump acquired another 1989 production S-76B, as well, which received the registration code N7TP. Both G-TRMP and N7TP wear distinctive white-red-and-blue livery, something of an inverse of N76DT's paint scheme, with "TRUMP" written in red letters on the tail boom.

Sometime between 2015 and 2016, one of these other two S-76Bs got an all-new cabin layout designed by Eric Roth, a famous aircraft interior-designer and president of International Jet Interiors. Roth was also responsible for redoing the inside of Trump's Boeing 757, sometimes referred to as Trump Force One.

N76DT, the helicopter up for sale now, was at the center of a brief controversy in 2015, as well. Then-candidate Trump had planned to offer free rides to children in the S-76B at the Iowa State Fair as part of his campaign.

However, despite saying he would do so at his own risk, officials at the fair refused to allow him to conduct the flights from the fairgrounds. Undeterred, Trump ultimately set up shop in a nearby parking lot.

Altogether, N76DT is not just a bespoke flying chariot for any very wealthy buyer, it's also something of a historical artifact now. So, if you have the means and are interested in picking up this relatively unique helicopter, you can check out the listing on Aero Asset's website and make them an offer.