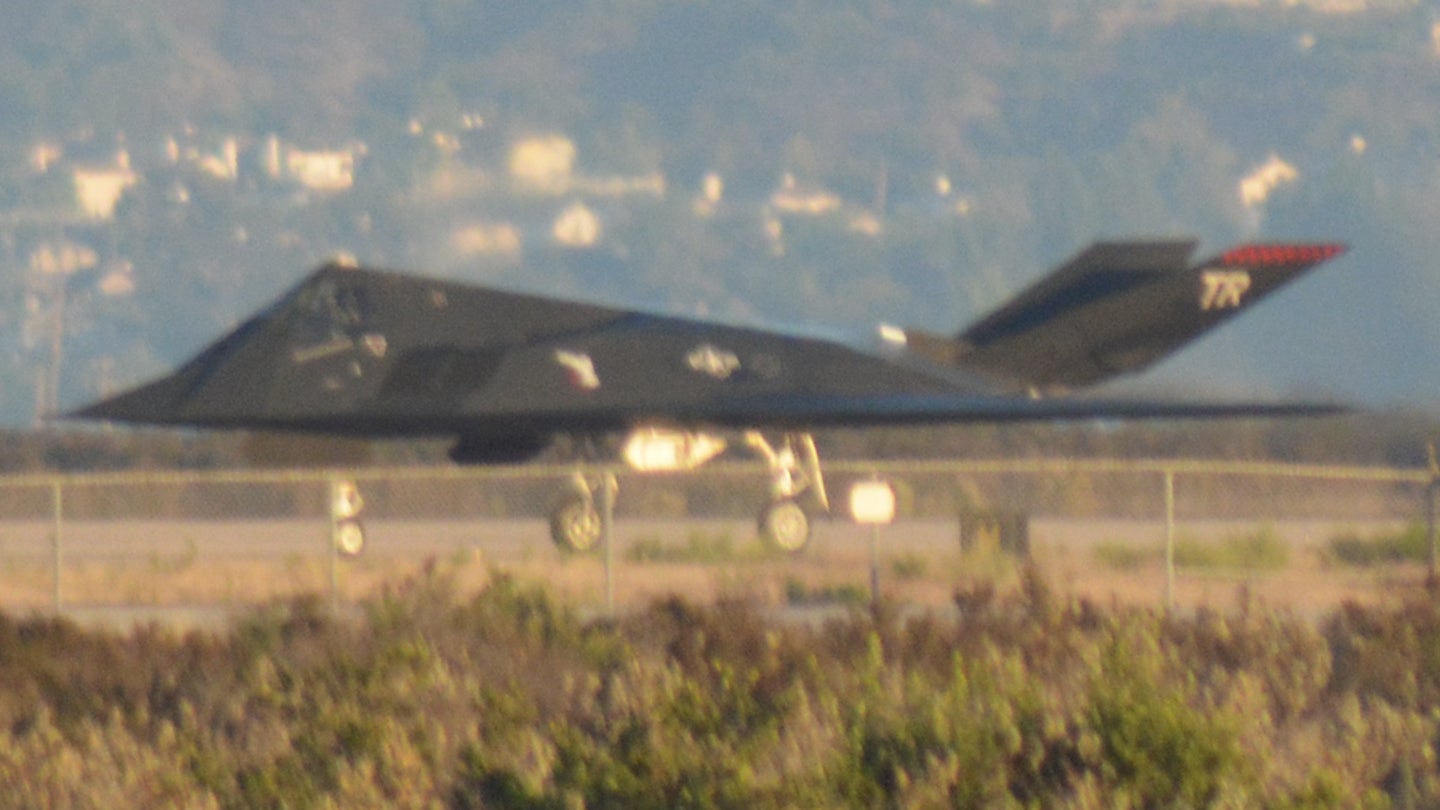 We have gotten our first close-up look at the F-117 Nighthawks that have forward deployed to MCAS Miramar in San Diego, the arrival of which The War Zone was first to report on. You can read details about their arrival, see video of it, and listen to the air traffic control audio in our previous article. The aircraft pictured looks exceptionally 'fresh,' unlike some of the worn coatings we have seen on F-117s that have popped up at remote locales over the last few years.

The fresh coating of radar-absorbent material—the highly important outer cloak that helps the Nighthawk attenuate radar returns—apparently includes a bright red-and-black checkered tail-band. Notably absent is the 'Dark Knights' moniker seen on one F-117 spotted over the Mojave Desert in 2019. This is likely the unit's name, official or otherwise, that matches with the KNIGHT callsign they commonly use. High-contrast 'TR' tail markings are also present, indicating the aircraft's home base at Tonopah Test Range Airport. The F-117s carried similar tail markings decades ago after being declassified and before they moved from the remote Nevada base to Holloman Air Force Base in New Mexico.

The F-117 in the photos is also adorned with what appears to be a high-visibility Nighthawk emblem near its intake. The Nighthawk logo I am referring to looks like the one below and was used throughout the operational life of the program:

The rest of the aircraft's markings are bright and clear, as well.

The shots come to us from Phil Decker who runs the Air Tales Instagram and Youtube accounts. They underline what The War Zone has been saying for some time, that the tiny flying F-117 force has migrated from a test and evaluation activity to also a more formal aggressor role. We may have even captured a photo opportunity at Tonopah Test Range Airport meant to commemorate the unit's establishment or another significant historical marker as a prelude to its first deployment.

Phil told The War Zone that three F-117s seemed to have arrived at the base, two earlier in the day and another in the evening. Otherwise, one may have snuck out and then returned.

While MCAS Miramar has confirmed to The War Zone that the jets are indeed there, we are still working to get a statement from Air Combat Command about why they are deployed to the base, and their broader mission. The War Zone is the only media outlet that has gotten a formal statement as to the F-117's disposition from the Air Force in recent years, including how many are left and who is flying them. You can check out this official information in this past piece of ours. As such, it would be great to get an update and hopefully confirm the F-117's new and far more visible role.

Finally, just a personal thought. It must have been like Darth Vader arriving on the Death Star when these jets landed at MCAS Miramar midday. The base houses hundreds of aircraft, from F-35Cs to MV-22s, to C-130Js. Many of those units have young enlisted folks working on the flight line who may have never even heard of the F-117 before, or at the very least had no idea they were still operating. With that in mind, it would be one hell of a surprise seeing one of these taxi past and disappear into a hangar without explanation.

We will continue to keep you updated on any new information we receive about this historic Nighthawk deployment.