Air Force Confirms, Then Retracts Statement That One Of Its RC-135W Spy Planes Flew Over Taiwan

The United States has also just approved three arms deals for Taiwan, one of which includes short-range ballistic missiles that can hit the mainland. 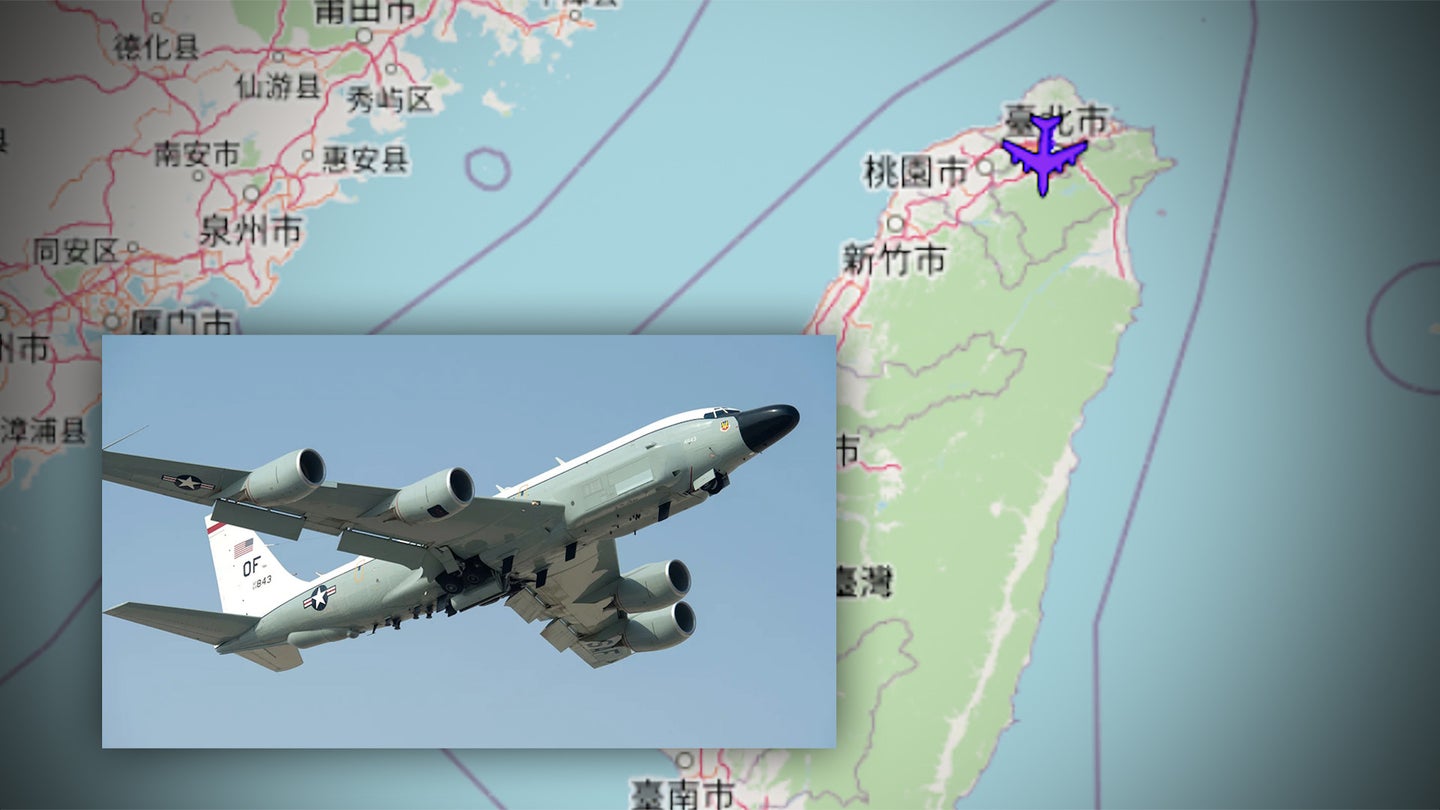 The U.S. Air Force has confirmed that an RC-135W Rivet Joint spy plane made a highly unusual flight over the northern end of the island of Taiwan earlier this week as part of an operational intelligence, surveillance, and reconnaissance mission. The United States has also just approved a new round of potential arms sales to the island's government, including short-range quasi-ballistic missiles capable of reaching the mainland. All of this follows a recent spate of threatening messaging from Beijing aimed at Taipei and its allies in Washington.

Update: On Oct. 23, 2020, Air Force Lieutenant Colonel Tony Wickman, the Director of Public Affairs for Pacific Air Forces, reached out to The War Zone to say that the original confirmation of the RC-135W flying over Northern Taiwan had been in error.

"On Wednesday, my staff responded to your query regarding an RC-135 flight (link to story below) and I must inform you that what we gave you was incorrect," he said. "I would like to correct the record by stating we did not have any U.S. aircraft in that area on the date and time in question. I apologize for passing bad information to you as you attempted to provide accurate information to your readers."

Taiwan's Ministry of National Defense has also reportedly denied that the Rivet Joint flew over the island. Taiwanese media reports have said that the RC-135W did enter the island's Air Defense Identification Zone.

We have changed the headline for this story to accurately reflect the information we have now. In addition, it is worth noting that online flight tracking software showed the RC-135W Rivet Joint with the serial number 62-4134 flying over northern Taiwan again today.

"I can confirm that a RC 135W [sic] Rivet Joint aircraft did fly over the northern portion of Taiwan yesterday as part of a routine mission," a public officer for Pacific Air Forces (PACAF), the top Air Force command for operations in the Pacific region, told The War Zone in a statement late on Oct. 21, 2020. "Due to operational security we are not able to discuss the specifics of the mission."

Plane trackers using online flight tracking software had been first to notice the Rivet Joint's mission earlier that day. The available tracking data is limited, but suggests that the plane flew directly over the island's capital city, Taipei, at one point.

Flight tracking software also showed that the aircraft in question was an RC-135W with the serial number 62-4134. On Oct. 19, this same Rivet Joint, as well as U.S. Navy EP-3E Aries II intelligence, surveillance, and reconnaissance (ISR) plane, had been spotted flying a mission in the Bashi Channel, a body of water south of Taiwan that links the Philippine Sea and the South China Sea, as well as off China's southern coastline. The Bashi Channel has seen a particularly notable uptick in U.S. military activity this year, which the War Zone has been following closely.

That Rivet Joints, as well as other U.S. military ISR aircraft, are flying in this strategic part of the Pacific, in general, is hardly surprising. These activities in the region are relatively well known and caused something of a stir earlier this year, as well as an official rebuke from Chinese officials, over the apparent practice of RC-135s using bogus transponder codes, which, of course, does not hide the planes from enemy radars or really do much to conceal their flights, though it does obfuscate their movements on online tracking software.

Though certainly uncommon, this is not the first time that an American military aircraft has flown directly over Taiwan this year. In August, online flight tracking software indicated that a Navy EP-3E had flown a very similar route, including passing over Taipei. In June, a Navy C-40 passenger transport aircraft also flew over the island. There have also been several instances in the last two years or so where U.S. military aircraft and ships have transited the Taiwan Strait.

The RC-135W overflight, as well as the earlier flights over the island, are unusual and clearly seem designed to send a message to Beijing about America's commitments to the island's government. In 1979, the U.S. government formally recognized the regime in Beijing as the legitimate government of China, but Congress also passed the Taiwan Relations Act, reserving the right to support the island's military and come to its defense in a crisis until its status has been settled for good. The Chinese government's position is that it is a rogue province that is part of its national territory and that the airspace above it is sovereign national airspace.

Beyond this signaling, we don't know exactly what the Rivet Joint's mission in this particular case might have been. However, the Air Force's fleet of airliner-sized RC-135V/Ws are among some of the most capable intelligence-gathering platforms in U.S. military service today, with large signals intelligence suites able to detect and geolocate various kinds of emitters, including radars and communications nodes.

With some two dozen intelligence analysts on board on a typical mission, these aircraft can intercept and begin to analyze enemy communications chatter and collect data on an opponent's “Electronic Order of Battle," including integrated air defenses. You can read more about the Rivet Joints and their capabilities in this past War Zone piece.

Keeping tabs on Chinese military activity on the coast of the mainland facing Taiwan is an important mission, broadly, for the United States, given its aforementioned commitments to Taipei. It's even more relevant at present given a slew of threatening signals emanating from the regime in Beijing, which routinely says it could take military action should authorities in Taipei seek to formally break away from the mainland.

Just this past weekend, unconfirmed reports originating from media outlets in Hong Kong said that the People's Liberation Army (PLA) was beefing up its ground-based missile forces near its southeastern coastline, including with the possible deployment of new hypersonic DF-17 missiles. Global Times, a newspaper operated by the Chinese Communist Party, subsequently published a piece based on those initial reports and citing Chinese "experts" who claimed that these deployments were meant to thwart "foreign military intervention" if the PLA were to initiate a "re-unification-by-force" operation.

This follows months of major PLA exercises, some of which appeared to simulate potential operations against Taiwan, as well as other provocative military activity, including sending aircraft across the Median Line in the Taiwan Strait, which serves as the de facto boundary between the mainland and the island. There have been competing U.S. military exercises, and other military movements, some of which have involved other American allies in the region, this year, as well.

This kind of tit-for-tat posturing has continued just in the past 24 hours with the announcement late yesterday that the U.S. government had approved a trio of potential arms sales to Taiwan. The three packages center on possible deliveries of High Mobility Artillery Rocket Systems (HIMARS), AGM-84H Standoff Land Attack Missile-Expanded Response (SLAM-ER) missiles, and MS-110 podded reconnaissance systems for combat jets such as Taiwan's F-16 Viper fighters. The deals, which Taiwan will still have to formally agree to and could be subject to change as part of subsequent negotiations, are valued at more than $1.8 billion, combined, and include a variety of ancillary equipment and services.

The AGM-84Hs, a derivative of the Harpoon anti-ship missile, would offer Taiwan important additional capacity to engage threats across the Strait and elsewhere around the island in a crisis, while giving the launching aircraft the ability to stay further away from the PLA's integrated air defenses. The weapon, which despite its name can engage targets on land or at sea, is also highly-accurate and resistant to electronic warfare jamming due to the use of an imaging infrared seeker to find its target in the terminal phase of flight.

The MS-110s, which contain an advanced, long-range camera, will give Taiwanese combat jets important new reconnaissance capabilities, including potentially the ability to peer into the mainland to some degree from a standoff position using a slanted flight pattern. The multi-spectral camera system in the MS-110 can collect visual and infrared imagery, as well as fuse them together for greater fidelity. In addition, this means the camera can grab images at night, as well as during the day, and detect objects of interest that might be obscured by smoke and dust, as well as some man-made camouflage.

However, the HIMARS package may be the most significant of the three. The system is capable of firing various munitions from the common M142 launcher mounted on a 6x6 tactical truck, but the only ones that this proposed deal includes are 64 Army Tactical Missile System (ATAMCS) quasi-ballistic missiles with unitary high-explosive warheads. These missiles have a range of approximately 190 miles and would be easily able to reach coastal areas across the Strait, even from the center of the island. These weapons could be extremely valuable for engaging PLA artillery and ground-based missile systems, command and control nodes, supply dumps, as well as areas where invasion forces might be marshaling.

Of course, it's important to note that the PLA has a massive advantage in raw numbers, as well as various key systems, including ground-launched ballistic and cruise missiles, over the Taiwanese military. The PLA's air and naval branches have also demonstrated their ability to launch strikes from multiple directions at once, including from out in the Pacific to the east, potentially enveloping the island. At the same time, Taiwan is well aware of these realities and has focused heavily on developing and acquiring various capabilities that could help delay a Chinese invasion to buy sufficient time for the U.S. military to stage an effective counter-intervention.

For their part, as expected, Chinese officials have already denounced the new proposed arms sales to Taiwan. The deals "seriously damage China's sovereignty and security interests, send a seriously wrong signal to Taiwan independence forces, and severely damage China-U.S. relations and peace and stability in the Taiwan Strait," Chinese Foreign Ministry spokesperson Zhao Lijian said. "China will make a legitimate and necessary response according to how the situation develops."

U.S. President Donald Trump's administration has already incited the ire of Chinese authorities on multiple occasions in the past with the approval of other major arms deals for Taiwan, including the sale of Block 70 F-16C/D Viper fighter jets, which Beijing had long said was a "red line" issue. U.S. officials, including Trump himself, have cultivated a very close relationship with Taiwanese President Tsai Ing Wen who won reelection earlier this year and has pledged to further distance the island's institutions from the mainland.

There could well be a concern in Beijing that Trump, who is struggling in the polls for the 2020 U.S. Presidential Election, which will take place in a matter of weeks, might even just signal support for a greater independence push in Taiwan to bolster his domestic political position. The American President and his Administration have been highly critical of the Chinese government at times over the past four years, especially over international trade issues, as well as other geopolitical concerns, such as territorial disputes in the South China Sea. The ongoing COVID-19 pandemic, which originated in China, has further soured relations between the two countries.

Tsai herself may have her own concerns about possible changes in the island's relationship with officials in Washington should Trump lose to his challenger, former Vice President and Senator Joe Biden, in November.

What does seem clear, is that American actions, such as sending the RC-135W over Taiwan and approving new arms sales to the island's government, will continue to draw ire and tit-for-tat responses from Chinese authorities.