Adding hypersonic missiles to the arsenals of dozens of Arleigh Burke class destroyers could be a very expensive and labor intensive endeavor. 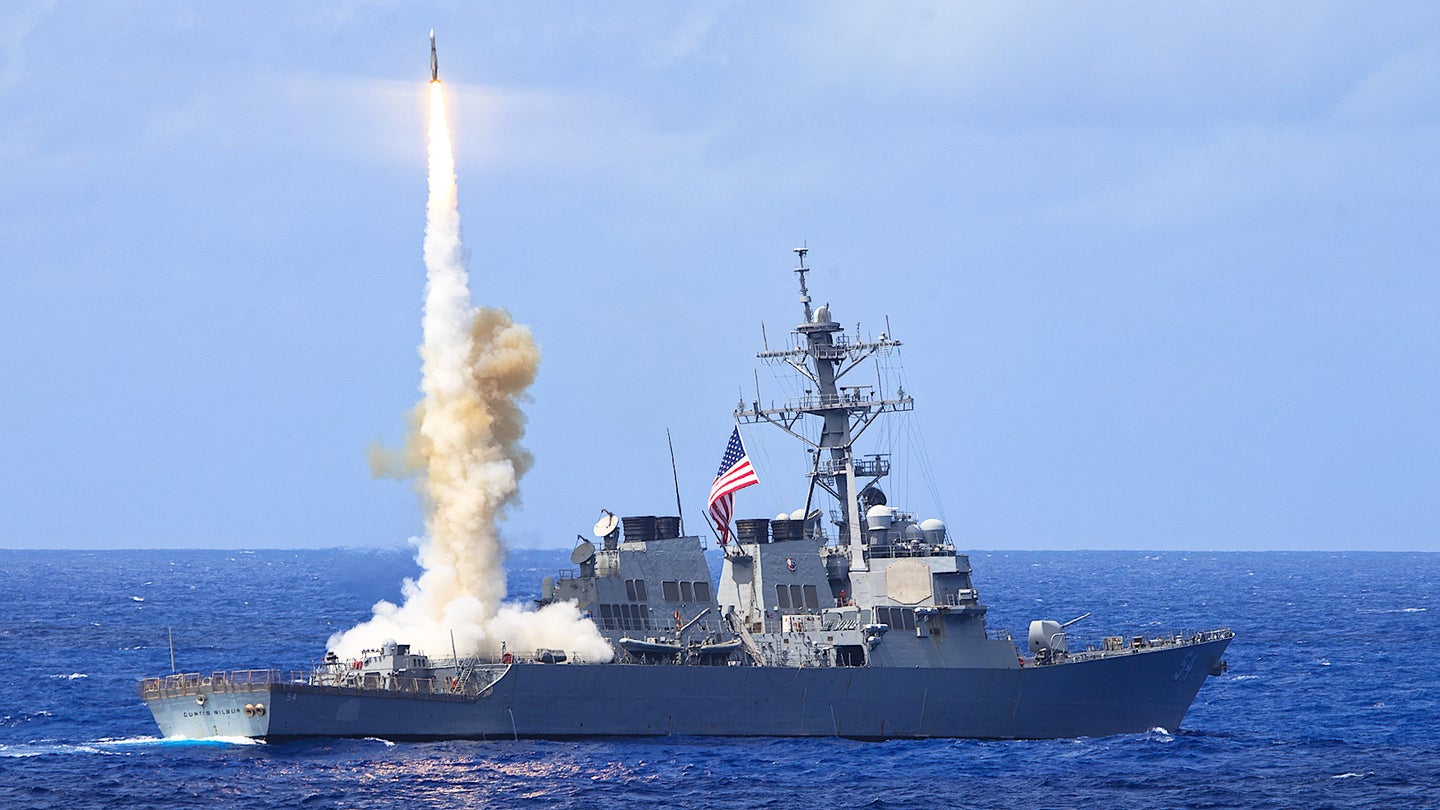 President Donald Trump's National Security Advisor, Robert O'Brien, has said that that the present plan is to integrate hypersonic missiles onto every one of the U.S. Navy's Arleigh Burke class destroyers, dozens of which are in service now, with even more under construction. Depending on the exact kind of hypersonic weapon those ships might receive, this could be an extremely costly and time-consuming undertaking.

was first to report on O'Brien's remarks, which he gave during a visit to Portsmouth Naval Shipyard in Maine on Oct. 21, 2020. At present, the U.S. Navy has 58 Arleigh Burke class ships in service, including Flight I, II, and IIA subvariants. More than a dozen additional ships in this class, including more IIAs, as well as new Flight III types, which will have additional advanced capabilities, are already under construction or on order.

"The Navy’s Conventional Prompt Strike program will provide hypersonic missile capability to hold targets at risk from longer ranges," O’Brien said in his prepared remarks, according to Defense News. “This capability will be deployed first on our newer Virginia class submarines and the Zumwalt class destroyers. Eventually, all three flights of the Arleigh Burke class destroyers will field this capability."

The still-in-development Conventional Prompt Strike hypersonic missile is the Navy's portion of a shared development effort with the U.S. Army. This weapon uses a ballistic missile-like rocket booster to loft an unpowered hypersonic boost-glide vehicle, known as the Common Hypersonic Glide Body (C-HGB), to an optimal altitude and speed. After reaching that point, the C-HGB glides down to its target at hypersonic speeds, defined as anything above Mach 5, within the atmosphere.

The boost-glide vehicle is capable of following a variable trajectory and maneuvering laterally, making it much more unpredictable than re-entry vehicles on traditional ballistic missiles, even those capable of maneuvering on their own. This, in turn, makes it extremely difficult for an opponent to defend themselves in any way, including simply attempting to reposition critical assets or otherwise seek cover, before the weapon hits its mark.

Last week, the Army Secretary Ryan McCarthy said that the C-HGB had demonstrated extreme accuracy in testing, being able to reliably hit within six inches of the designated target. The Pentagon has previously said that this hypersonic boost-glide vehicle will be able to reach a peak speed of up to Mach 17 and that it will be able to "strike targets hundreds and even thousands of miles away."

The Navy has already publicly said that it plans to first integrate, onto its future Block V Virginia class submarines. Earlier this year, Congress also pushed for adding this weapon to the arsenal of the service's long-troubled Zumwalt class stealth destroyers. The first-in-class USS Zumwalt, which was initially delivered in 2016, only fired a missile of any kind for the first time this week.

It is worth noting that there is the possibility that O'Brien may have been speaking more generally about adding a hypersonic weapon capability to the Arleigh Burkes, rather than integrating the Conventional Prompt Strike missile onto those ships, specifically. It remains unclear what the peak speed of the Navy's planned super-sized multi-purpose SM-6 Block IB missile, which you can read about in more detail in this past War Zone piece, might actually be. It's also not clear if the top-secret Sea Dragon missile is capable of reaching hypersonic speeds. There are also undoubtedly other hypersonic weapons in development in the classified realm, some of which may also be intended to arm these destroyers in the future, as well.

Still, O'Brien directly linked the hypersonic "capability" he was talking about for the Arleigh Burkes to what is planned for the Block V Virginia class and the Zumwalt class. In addition, there have already been discussions in the past about possibly refitting some number of older Arleigh Burkes to be able to fire the Conventional Prompt Strike missile, as well as adding this capability from the start to the design of a new Large Surface Combatant in the future. Having dozens of destroyers capable of employing these missiles would only further expand the ability of the Navy to persecute long-range, time-sensitive strikes, especially against highly-defended targets.

The "strike length" cells in the Arleigh Burke's Mk 41 VLS arrays are designed to accommodate missiles around 20 feet long at most, as well. While the exact length of the Conventional Prompt Strike missile is unknown, the Army says the weapon will fit inside a container that is roughly the same length as an M870 flatbed trailer, which is 40 feet long.

This is why the Block V Virginia class submarines will be first to get these missiles, because these boats will feature a new Virginia Payload Module (VPM) with four very large launch tubes. The Navy also notably used an Ohio class ballistic missile submarine, which has tubes able to hold the nuclear-armed Trident D5 submarine-launched ballistic missile, a weapon around 44 feet long, to conduct the first publicly acknowledged at-sea test of a Conventional Prompt Strike missile in 2017.

Similar questions had arisen about the logistics of integrating the Conventional Prompt Strike missile onto the Zumwalt class destroyers, as well. Those ships, at least, have space that could potentially be freed up by removing the two 155mm Advanced Guns Systems, which are effectively dead weight since the Navy has no plans at present to buy any ammunition for them.

Even if a reasonable conversion program could be developed for the Arleigh Burkes, the Navy would still have to execute it, which would be an enormous undertaking, both in terms of time and resources. Defense News' initial report on this plan rightly noted that there are already severe strains on the shipyard space available for maintenance and conversion work, which has often led to significant delays in getting ships and submarines returned to the fleet.

All of this also follows the announcement of a questionably ambitious plan to increase the overall size of the Navy's combined fleets to more than 500 ships, which would only add to these yards' workloads. You can read more about this naval force structure proposal, now known as Battle Force 2045, in detail in these previous War Zone stories.

In principle, at least, arming all of the Navy's existing and future Arleigh Burkes with hypersonic missiles would dramatically expand the service's long-range, precision, time-sensitive strike capabilities. At the same time, it very much remains to be seen if the service will be able to turn this plan into a reality and what hypersonic weapons these destroyers might actually receive in the end.