After Germany, now Spain is planning to increase its Eurofighter fleet. 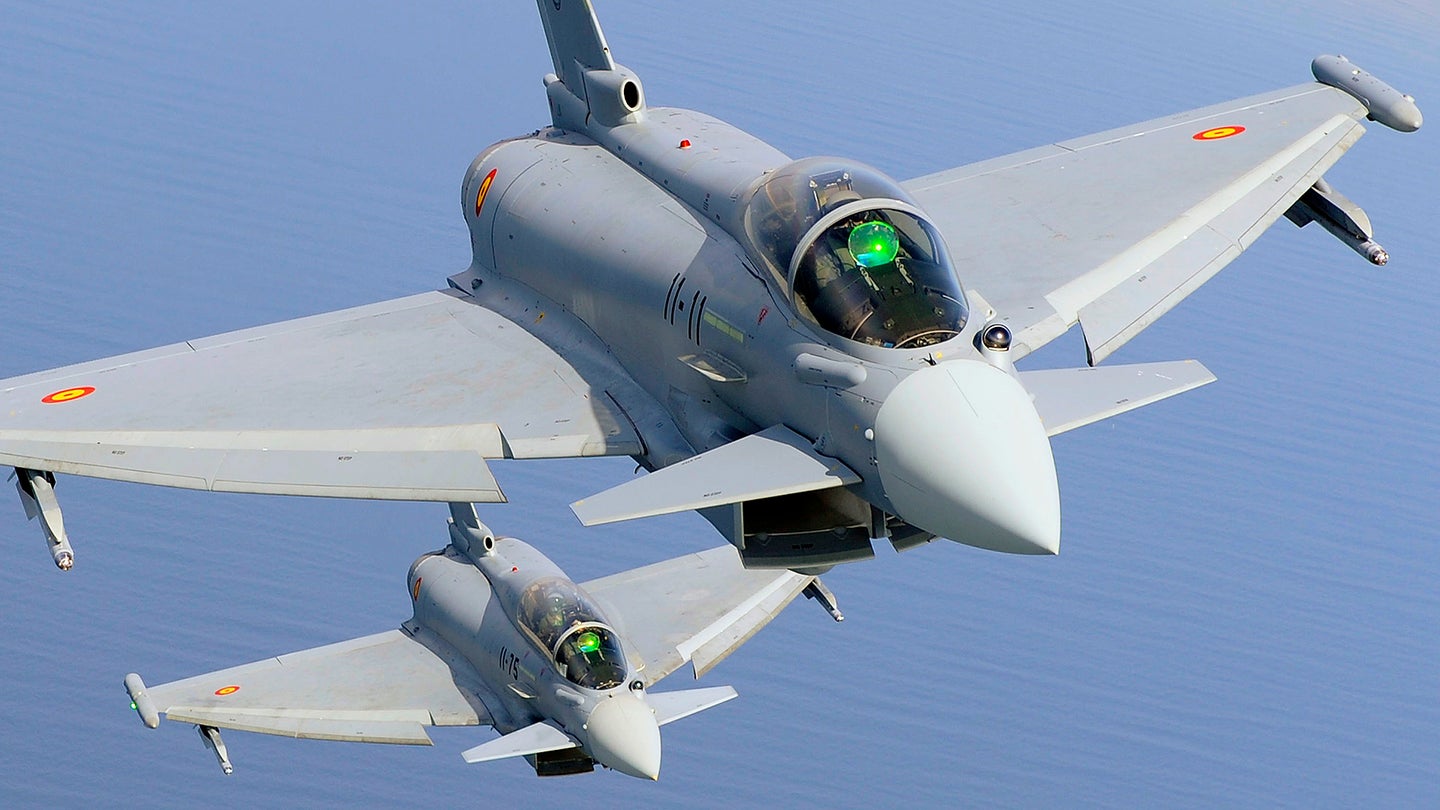 Spain is the latest European country to move to buy more Eurofighter Typhoon multirole fighter jets to bolster its air force. The manufacturer announced today that it is now in negotiations with the Spanish government for the replacement of 20 Spanish Air Force EF-18 Hornets under what is called Project Halcón, or Project Hawk.

The company says it has submitted its offer to the Spanish government and is now in talks “to mature the proposal.” It expects to sign a contract for the 20 new Typhoons in 2021.

To supersede these older Hornets, the Eurofighter consortium is offering 20 new Typhoons that will be completed to the “latest standard,” including the Captor-E Mk 1 active electronically- scanned array (AESA) radar, which you can read more about here.

The Spanish Air Force has already received all 73 Typhoons from its initial order, which comprised 59 single-seaters and 14 twin-seaters. Three of these have been lost in accidents, but the remaining 70 are all still active, forming a fast-jet fleet alongside U.S.-supplied EF-18 Hornet multirole fighters.

Operating one American and one European fighter type in parallel is an informal Spanish Air Force policy dating back to the Cold War when types such as the F-4 Phantom II, F-5 Freedom Fighter, Mirage III, and Mirage F1 made up the country’s frontline fighter fleet.

The 20 oldest EF-18 Hornets that Madrid is now looking to replace are the oldest in the country’s inventory. They started life as U.S. Navy and U.S. Marine Corps F/A-18As and are now used to defend the Canary Islands, a Spanish archipelago located in the Atlantic Ocean, west of Morocco. Although they have a multirole capability, they are primarily used for air defense.

These jets are the survivors from a batch of 24 delivered from U.S. stocks between 1995 and 2000. Although they have modernized to the F/A-18A+ standard, which essentially brought them up to a standard comparable with the U.S. Navy’s F/A-18C/D, the airframes are old and now require replacement as a matter of priority.

This is an important consideration for Spain’s industrial base. The last Spanish Air Force Typhoon from the original order was delivered earlier this year, when the Tranche 3 jet arrived at Albacete-Los Llanos Air Base on January 9.

Spanish Typhoons, like those for the other European core customers — Germany, Italy, and the United Kingdom — were delivered in three distinct “tranches” with significant differences in terms of avionics and capabilities.

Airbus Defence and Space is also currently undertaking a program at Getafe to upgrade the 17 surviving Spanish Tranche 1 aircraft to incorporate later Tranche 2 and Tranche 3 equipment, which would confer a full multirole capability. The company announced re-delivery of the first modernized Typhoon on February 26, 2019, and aims to complete the program in 2023. It’s a different approach to the United Kingdom, for example, which is instead using its Tranche 1 jets for more basic air-to-air and aggressor missions.

While Spain is making efforts to ensure its Typhoon fleet remains capable, and to replace the oldest EF-18s, there is still a question over the future of the remaining Hornet fleet, which comprises 52 single-seaters and 12 two-seaters, the remainder from a total of 72 delivered directly from the aircraft’s original manufacturer, McDonnell Douglas, as new-build airframes between 1986 and 1992.

These new-build Hornets were put through an upgrade program in the mid-1990s, which brought them up to a standard that was broadly similar to the F/A-18C/D. The resulting aircraft, which became known as EF-18A+/B+s, featured new mission computers, targeting pods, and AIM-120 AMRAAM capability.

A continued process of enhancements under a mid-life upgrade effort has since helped the Hornets keep pace with their rivals, adding the Thales Scorpion helmet-mounted display and a ROVER air-to-ground video datalink for the targeting pod, among others. In the process, the jets have received the revised designations EF-18AM/BM. However, the aircraft are now showing their age, as are similarly configured aircraft around the world. For example, the F/A-18C has been retired from frontline U.S. Navy service.

Spain may yet buy even more new Typhoons as it looks to replace the entire EF-18 fleet between 2025 and 2030, although exactly how many extra Eurofighters may be required is unclear and the future of this effort will likely be influenced by the progress made on the European Future Combat Air System (FCAS), which involves France, Germany, and Spain. The FCAS initiative plans to field a sixth-generation stealthy manned fighter and accompanying unmanned platforms by 2040.

One possibility that’s been suggested is to replace the remaining Hornets by purchasing three batches of 20 Typhoons, to spread the cost, which will be particularly important as the Spanish economy takes a hit from the effects of the Coronavirus pandemic.

Whatever happens, it seems Spain has chosen to buy more Typhoons as the next step in modernizing its air force. As such, the country appears to be following a similar path taken by Germany, which has also confirmed its intent to purchase 93 additional Tranche 4 Eurofighters. The German buy will include 38 jets as under the Quadriga program to replace the Luftwaffe’s early Tranche 1 aircraft, plus another 55 to succeed a portion of the Tornado combat jet fleet, 85 examples of which are earmarked for replacement. The German Ministry of Defense hopes to launch the procurement of the new Typhoons in 2025.

The German situation is made more complex by the need to replace the remaining Tornados operating in the nuclear strike and electronic warfare roles. This has led to a decision to purchase 30 F/A-18E/F Super Hornets that will be adapted to carry B61-12 freefall nuclear bombs, plus 15 EA-18G Growler electronic attack aircraft, as discussed by The War Zone in this previous article.

It’s worth noting that Spain is not among the countries that Boeing highlighted in the past as a potential Super Hornet customer, suggesting that the Typhoon may have a straightforward path to securing more orders from Madrid.

On the other hand, if Spain decides to replace the Navy’s EAV-8B+ Matador II short take-off and vertical landing (STOVL) jets — equivalent to the U.S. Marine Corps’ AV-8B+ Harrier II — the only option would be the F-35B Joint Strike Fighter. This would be able to operate from the deck of the Spanish Navy’s amphibious assault ship Juan Carlos I. The high cost of replacing such a small force of just 13 jets might prove prohibitive, but it will have to be addressed before the Matador II is retired from around 2030 to 2034.

Alongside its fighter modernization plans, Spain may be on the verge of selecting a successor to its jet training fleet, too. Airbus Defence and Space recently pitched its new Airbus Future Jet Trainer, or AFJT, to Spain, with a view to replacing the current Spanish Air Force fleets of F-5M Freedom Fighters and CASA C-101 Aviojets around 2027 or 2028.

The appearance of the proposed AFJT was somewhat surprising. Not only does the Airbus trainer enter an already crowded marketplace, but Spain has already selected the turboprop-powered Pilatus PC-21 to replace its Aviojets, placing an order for 24 of the Swiss-built machines.

Like other aircraft in its class, the AFJT is being offered as part of a complete package including live-virtual-constructive (LVC) training and ground-based training systems. The company is also hopeful that orders might follow from other European countries, potentially including Finland and France. Airbus has said the AFJT will be tailored to train pilots for aircraft such as the Typhoon and Hornet, specifically, while it’s also possible that it would be suitable to prepare aircrew for the future FCAS manned fighter.

Whether Spain chooses to fund a program for a new jet trainer, as well as additional Typhoons to replace more of its Hornet fleet, remains to be seen. For now, however, the Eurofighter is showing that, despite initial production for the core customers having come to an end, it still very much has a future both in Europe and potentially elsewhere.