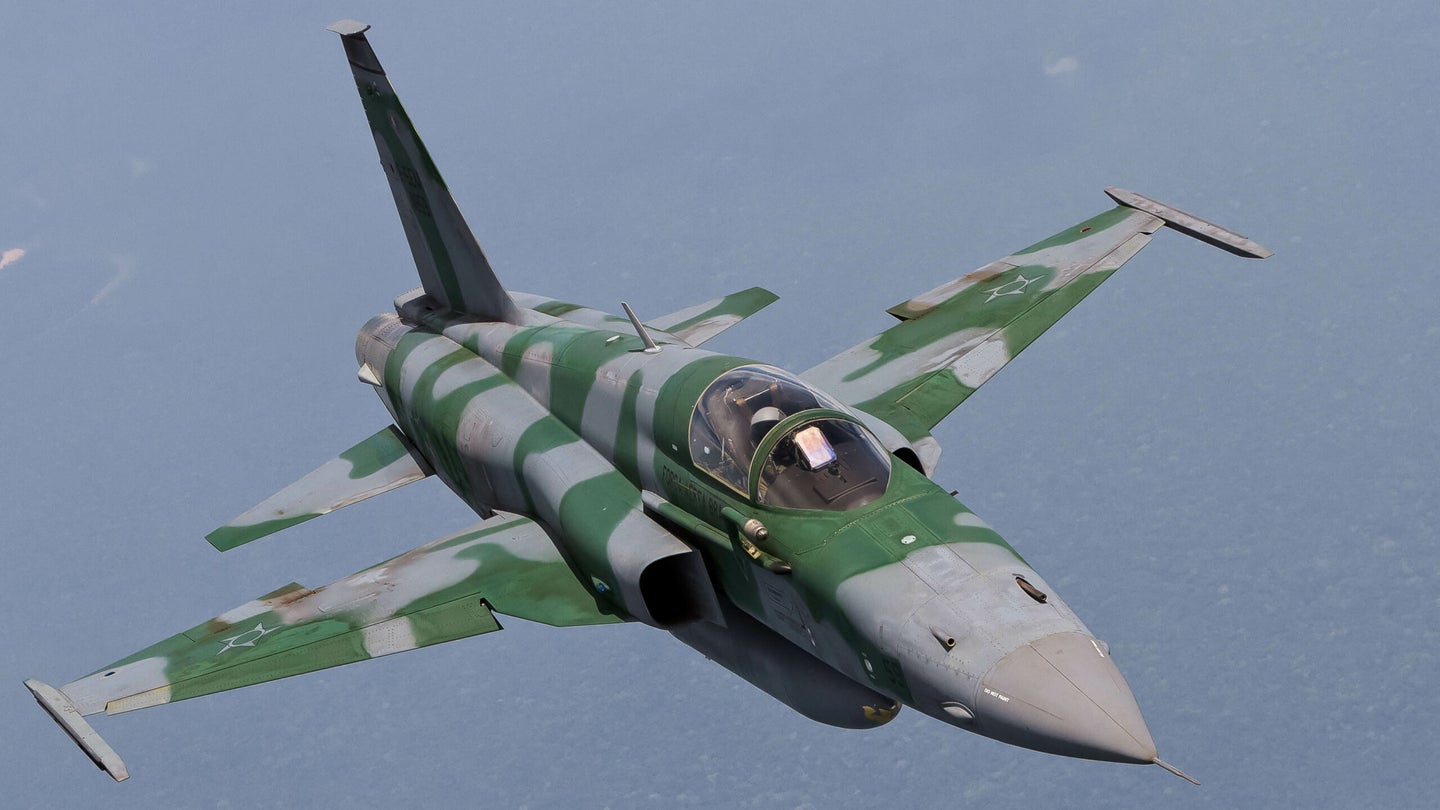 Brazil has finally completed a comprehensive program of enhancements for its fleet of veteran Northrop F-5 Tiger II jets, which are, remarkably, the country’s main fighter equipment. Although first delivered in 1975, the upgraded jets will be tasked with defending Brazilian airspace at least until the air force’s Saab F-39 Gripen multirole fighters gain full operating capability, presently scheduled to occur in 2025.

The upgrade cycle came to an end on October 14, 2020, when the final example — two-seater serial FAB 4810 — was handed over to the Brazilian Air Force at the Gavião Peixoto facility, in São Paulo state, run by the domestic aviation company Embraer. The jet, previously flown by Jordan, and acquired by Brazil second-hand, was the last of 49 examples that have been brought up to the latest F-5M standard. It will re-enter service with 1º/14º Grupo de Aviação, the “Pampa” Squadron, based at Canoas in the southern state of Rio Grande do Sul.

While there has been no shortage of programs designed to enhance the F-5E/F Tiger II — which first flew in prototype form on August 11, 1972 — the Brazilian effort, run by Embraer, has arguably produced the most capable F-5s of all.

Brazil purchased 68 F-5s from the United States, with the first Peace Amazon contract signed in 1973. The U.S.-supplied fleet ultimately included 58 single-seat F-5E Tiger IIs, four two-seat F-5Fs, as well as six two-seat F-5B Freedom Fighter trainers. The older F-5Bs were supplied pending availability of the more advanced F-5F, which didn’t arrive until 1988, alongside a final batch of F-5Es, all of which were ex-U.S. Air Force aggressor machines.

In the early 2000s, the Brazilian Air Force commenced work with Embraer and a local subsidiary of Israel’s Elbit Systems, AEL Sistemas, on a program to upgrade the surviving F-5E/F fleet to F-5M standard. In 2005, Embraer and AEL Sistemas received a $285-million contract to modernize 43 existing single-seat F-5Es. To this total was soon added three two-seat F-5Fs. After rework, the F-5E and F-5F were designated as F-5EM and F-5FM respectively.

Collectively referred to as F-5Ms, these enhanced aircraft all came out of the Gavião Peixoto plant with a host of advanced avionics retrofitted. At the center of this package is a Leonardo Grifo F radar, an advanced mechanically-scanned pulse-Doppler radar with multi-aircraft targeting capability, as well as a data link developed domestically by Embraer that allows information to be exchanged with other F-5Ms within the same formation.

The jets also have a revised cockpit together with new avionics, including inertial/GPS navigation, three liquid-crystal displays, a new head-up display (HUD), and the “hands-on throttle and stick” (HOTAS) controls concept. The new glass cockpit is compatible with night-vision goggles (NVGs) and the pilot is also provided with an Elbit/AEL Targo helmet-mounted display, allowing off-boresight target designation.

New self-protection systems include chaff/flare launchers, a new radar warning receiver, and wiring for the use of Rafael’s Sky Shield electronic warfare pod.

The jets’ airframes underwent repairs intended to add another 15 years of service life, as well. A fixed refueling probe is now fitted as standard and allows the fighters’ range to be extended via air-to-air refueling, including now by the air force’s new Embraer KC-390 tanker-transport.

In terms of armament, the F-5M can employ the Israeli-made Rafael Derby beyond-visual-range air-to-air missile (BVRAAM) and the same company’s short-range Python 4 and 5 infrared-guided AAMs. A single Pontiac M39A2 20mm-caliber cannon is retained in the nose of the single-seat jets.

For air-to-ground missions, the jet can now be armed with laser-guided bombs, too. In addition, weapons trials have also been conducted of an indigenous long-range air-launched cruise missile, the MICLA-BR, carried under the F-5’s fuselage. This is an air-launched version of the MTC-300 (or AV-TM 300) surface-to-surface missile, with a range of 186 miles and inertial/GPS guidance plus an image correlation system for terminal navigation.

It is an impressive array of additional capabilities when compared to the original 1970s-era F-5E/F. However, the Brazilian Tiger II modernization program did not run entirely smoothly.

The first upgraded jet was a prototype F-5FM two-seater and rolled out at Embraer’s São José dos Campos headquarters in São Paulo state in December 2004. The initial modernized single-seat F-5EM was delivered to the Brazilian Air Force in September 2005.

Plans had originally called for the air force to receive a total of 46 serial-production upgraded aircraft — including three two-seaters — by 2007, but as of March 2008, only 23 upgraded Tigers had been delivered.

In late 2007, and after a previous plan to acquire ex-Royal Saudi Air Force F-5s had been abandoned, the Brazilian government reached a deal with Jordanian Aeronautical Systems to acquire 11 former Royal Jordanian Air Force F-5E/Fs as attrition replacements, and it was expected that at least some of these would be similarly upgraded. The eight F-5Es and three F-5Fs from Jordan arrived in São Paulo aboard an An-124 transport aircraft in August 2008, but, in the end, only three of the two-seaters were upgraded, providing for an overall total of 49 jets. The ex-Jordanian single-seaters were instead used as a source of spare parts.

Upgrade work on the last of the F-5s from Brazil’s original fleet, as opposed to the former Jordanian ones, was completed in 2013. Two of the two-seaters have since been lost, in accidents that occurred in July 2016 and May 2018, making Brazil’s decision to subsequently induct three of the ex-Jordanian two-seaters into the modernization program even more vital.

Brazil’s F-5s have now outlived the former French Air Force Mirage 2000s that were acquired as interim fighters, but the country’s successor to the Tiger II is now on the horizon. The first F-39E Gripen fighter has been shipped to Brazil and made its maiden flight in that country on September 24, 2020. It is now completing test flights before an official presentation in the capital Brasília, planned for October 23.

Brazil ordered 36 Gripens from Saab under the F-X2 program, which includes the significant transfer of technology to the Brazilian industry.

Even with the planned replacement of the F-5s with new Gripens, undertaking such a comprehensive range of enhancements for the existing Tiger II fleet has provided Embraer and AEL Sistemas with invaluable experience with cutting-edge fighter technology. Moreover, and despite the age of the basic F-5, Brazil’s advanced Tiger II will familiarize pilots and maintainers with advanced avionics and armaments ahead of the induction of the new-generation Gripen fighter in the years to come.

The conclusion of the Tiger II upgrade also goes to show just how much valuable service can be squeezed out of the basic airframe — one that traces its origins back to the 1950s.