China recently conducted a test involving a swarm of loitering munitions, also often referred to as suicide drones, deployed from a box-like array of tubular launchers on a light tactical vehicle and from helicopters. This underscores how the drone swarm threat, broadly, is becoming ever-more real and will present increasingly serious challenges for military forces around the world in future conflicts.

We don't know the name or designation of the drones CAEIT used in its September test, or that of the complete system being employed. However, video footage, seen below, shows that the unmanned aircraft are very similar in form and function to more recent models of China Poly Defense's CH-901 loitering munition.

When the tube-launched CH-901 first emerged in 2016, it featured a pair of pop-out wings, as well as a folding v-tail. More recently, that design has evolved and replaced the v-tail with another set of pop-out wings and folding twin-tail arrangement, similar to the drones we see in the CAEIT test video.

The Coyote comparison also extends to launch options CAEIT demonstrated in its recent test. The 48-tube ground-based launcher, which is mounted on a modified 6x6 version of the Dongfeng Mengshi light tactical vehicle, is similar in some respects to multi-tube trail-mounted launchers that the U.S. Navy's Office of Naval Research used to launch Coyotes as part of its Low-Cost UAV Swarming Technology (LOCUST) effort, as seen in the video below. Poly Defense has also shown at least a mock-up of an array of tubular launchers for the CH-901.

It's worth noting that any of these box-like launchers could also be installed on ships, as well as deployed in a static position on the ground.

CAEIT's test also involved at least one drone launched from a tube mounted on a Bell 206L helicopter, as well as one that popped out of a tube dropped from a what appears to be a Robinson R-series helicopter. A portion of the 206L's tail boom was blurred out in the video footage for unclear reasons. Coyote is notably capable of being air-launched, as well. The U.S. Navy has also experimented with dropping swarms of Perdix drones, which also feature two pairs of folding wings, but are much smaller, from F/A-18E/F Super Hornets.

The rest of the CAEIT video footage shows up to 11 of the drones flying in formation as a swarm, as well as an individual directing their movements using a touch screen on a tablet-like device. We also see views from the electro-optical cameras on the drones observing areas on the ground and then zeroing in on mock targets. It's not clear if these drones have any kind of low-light-capable or infrared cameras that would allow them to operate at night.

Some reports have suggested that the drone swarm seen in the CAEIT video represents an actual operational capability that the People's Liberation Army (PLA) now has, but whether or not this is the case is unclear. The overall system, especially the ground-based mobile launcher, certainly looks very mature and, as already noted, CETC and its subsidiaries have been actively working on swarming technology for years now.

All of this seems to underscore that, if the PLA doesn't have an operational drone swarm capability, is getting ever closer to fielding one. A swarm that can be deployed from multiple platforms, on the surface and in the air, potentially approaching a target area from multiple directions, would give the complete system immense flexibility and resiliency.

Swarms are inherently difficult for opponents to defend against and one of their most obvious applications is to blind, confuse, and overwhelm enemy air defenses. This very real threat is something The War Zone has been sounding the alarm on for some time now and which you can read about more here and here. As our own Tyler Rogoway previously wrote:

"Being networked together, and being autonomous in nature after being loaded with a target area location, along with other mission parameters, these swarms will be extremely hard to defend against using even the best SHORAD [short-range air defense] systems in development today. It's the saturation nature of the attack, the size of the attackers, and the fact that they work as a coordinated swarm, employing dynamic tactics to see as many in their company survive long enough to make their suicidal attack, that makes them so deadly... Just the knowledge that such an attack is possible would be psychologically stressful and demoralizing for troops on the ground. "

The idea that a single truck could deploy 48 drones in a matter of seconds, which could swarm a target area over the horizon, is a reminder that there is no defense for such an attack at this time. Lasers, miniature interceptors, and even other forms of directed energy and electronic warfare are still limited in their ability to counter drones at all, let alone massive swarms of them. The solution likely lies, at least in part, in other drones, as we wrote in 2017:

Such a capability is now in the process of being developed, but the fact that it is 2020 and we are still just beginning to grapple with this issue is another reminder of just how flagrantly deficient the Pentagon's foresight was on the matter.

Loitering munitions have also demonstrated the ability to have a devastating impact on an opponent, even when just used en masse rather than as part of a truly networked swarm. This reality has been especially visible, as seen in the video below, during the ongoing fighting between Armenia and Azerbaijan over the contested Nagorno-Karabakh region. You can read about more about this in The War Zone's recent coverage of that conflict. The danger that small drones, even home-brew types non-state actors are capable of building, pose to nation-state militaries is only becoming more and more apparent.

"I argue all the time with my Air Force friends that the future of flight is vertical and it's unmanned," U.S. Marine General Kenneth McKenzie, head of U.S. Central Command, said earlier this year. "I'm not talking about large unmanned platforms, which are the size of a conventional fighter jet that we can see and deal with, as we would any other platform."

A swarm of small explosive-laden drones could represent an even more serious threat across an entire area of a battlefield and is a capability that other countries, beyond China, including Turkey, have been developing in recent years, as well. Though the video of CAEIT's test showed the drones conducting kinetic strikes, they may also be able to carry small electronic warfare packages to carry out non-kinetic attacks or act as decoys, as well. Italian defense contractor Leonardo just recently demonstrated such a capability for the U.K. Royal Air Force and the U.S. Army is also looking at developing a family of swarming drones that can be air-launched.

A complete swarm could potentially include drones in various configurations, mixing and matching capabilities for maximum effect. They could also be networked together with other units and assets to support more complex operations.

Swarms will only continue to offer increasingly more significant benefits to commanders on the battlefield as time goes on, making them even more attractive. This capability could potentially be employed off the battlefield, as well, for asymmetric attacks on VIPs or sensitive facilities outside the context of a formal conflict. This could include harassing military forces in the lead up to or on the sidelines of a more serious confrontation, a risk highlighted by drone incursions over areas where the U.S. Army's Terminal High Altitude Area Defense (THAAD) missile defense battery on Guam operates last year, something The War Zone

No matter what, as China's CAEIT demonstrated in its recent test, drone swarms technology is very real already and it's only a matter of time before it becomes more integrated with existing concepts of operation, if this isn't the case for the PLA already. 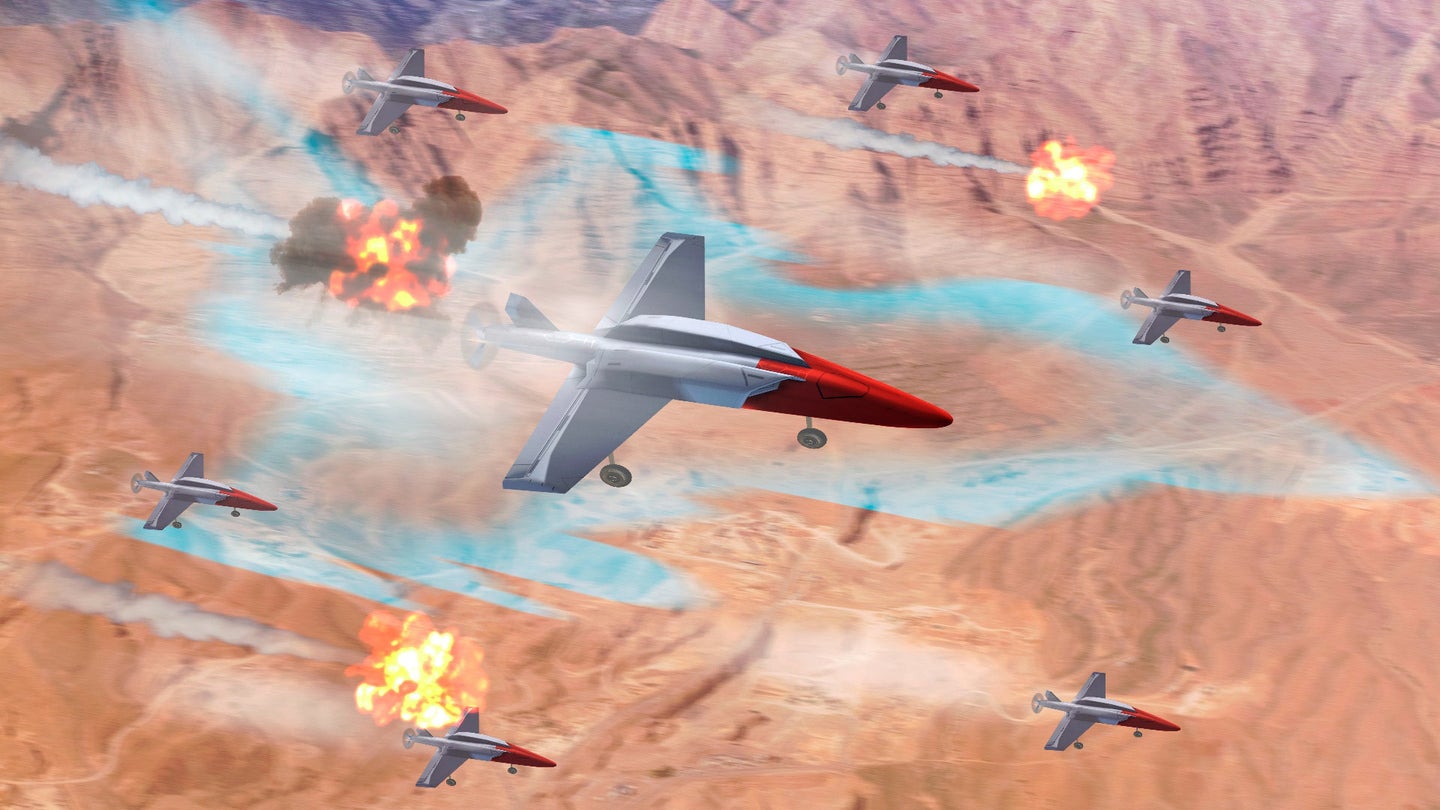 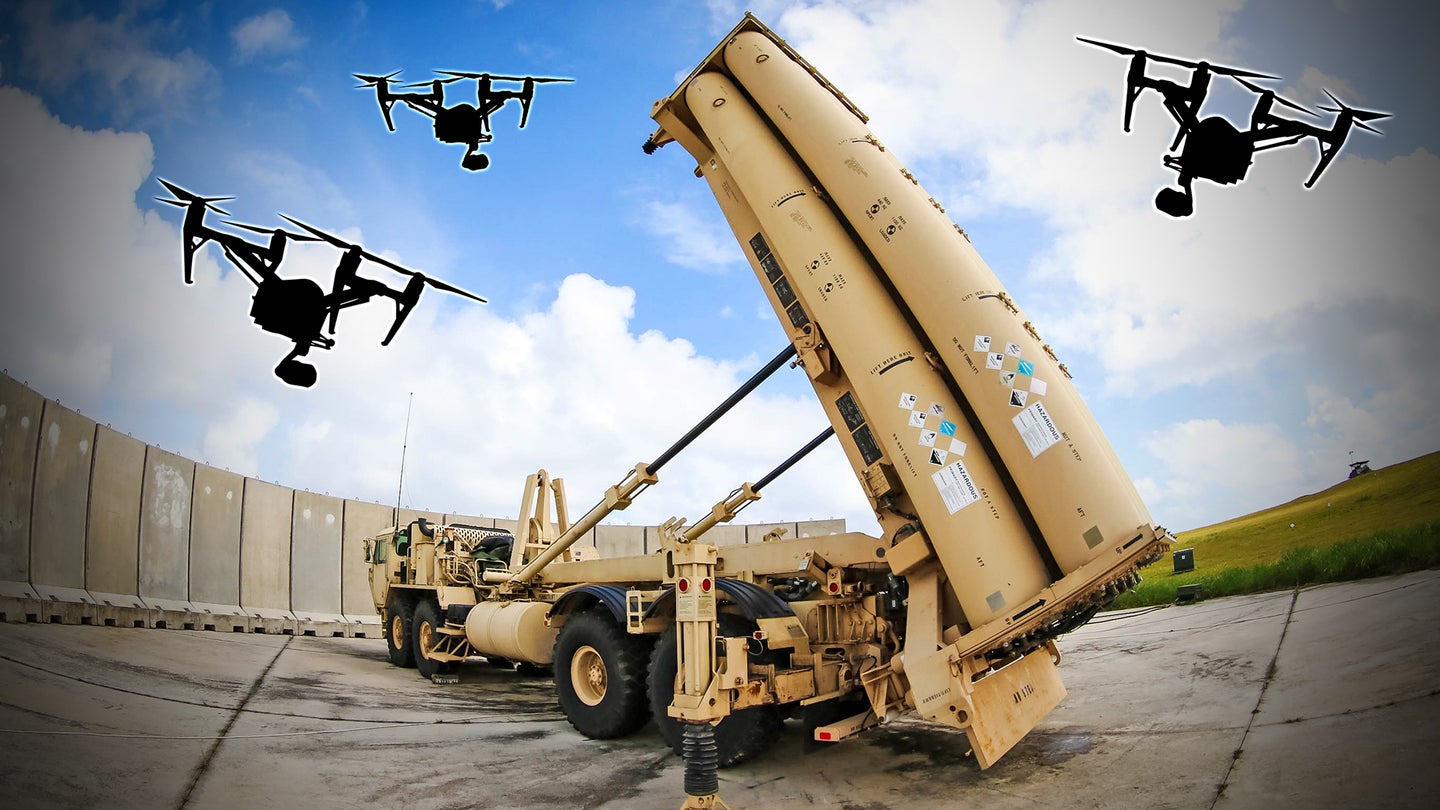