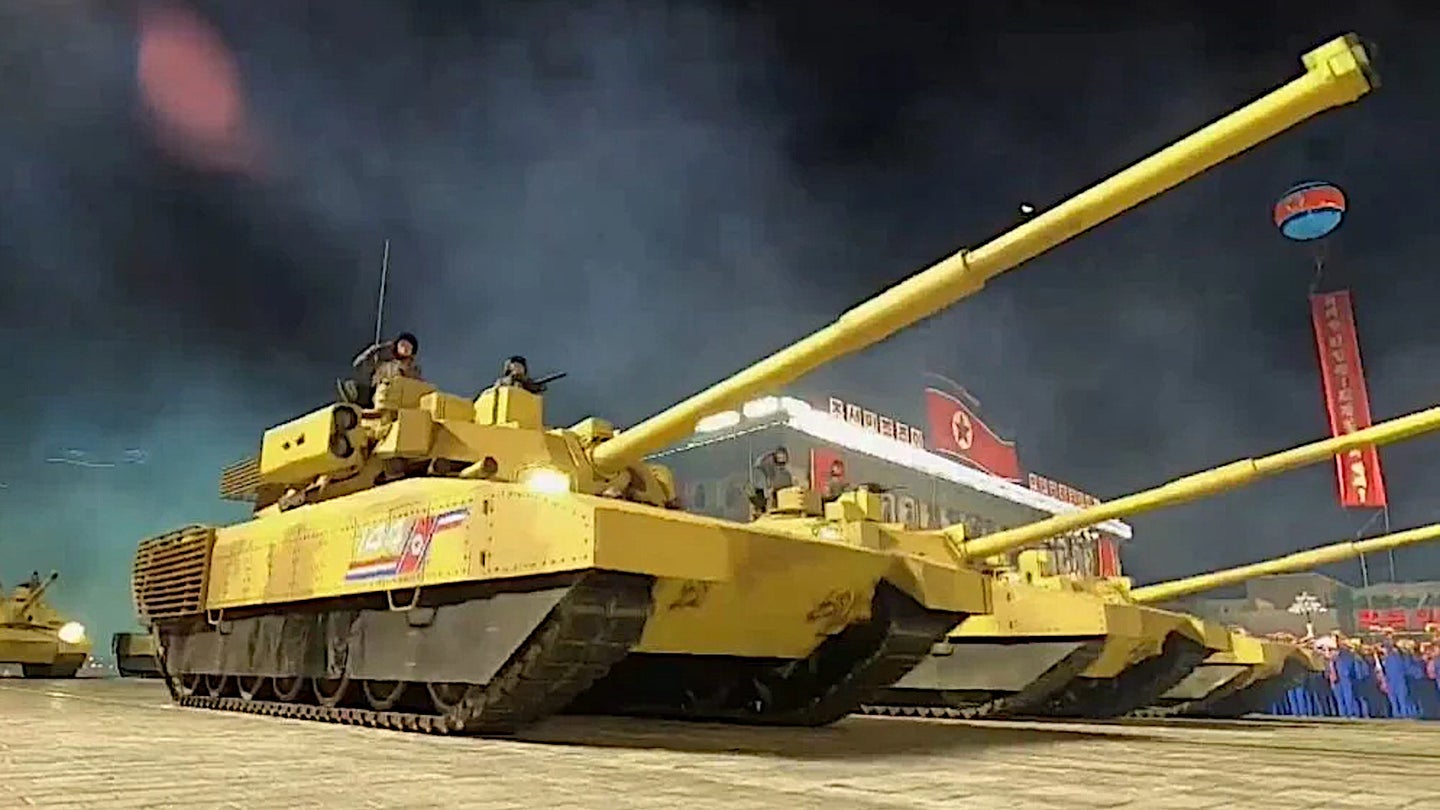 New massive intercontinental and submarine-launched ballistic missiles were the clear stars of North Korea's recent military parade marking the 75th anniversary of the one-party dictatorship's Workers' Party of Korea. However, a number of major conventional weapons developments were also on display, as you can read in The War Zone's initial reporting on the event. This included prototypes of a new main battle tank that appeared similar, at least visually, to more modern tanks, such as Russia's T-14 Armata and China's Type 99, though its actual capabilities and basic performance are unclear.

At least nine of the tanks, a designation for which does not appear to have yet emerged, were part of the procession through Kim Il Sung Square in the North Korean capital Pyongyang on Oct. 10, 2020. All of them were wearing what looked to be a tan-and-brown desert camouflage scheme, which would not be particularly useful on the Korean Peninsula. The paint job seems more intended to further evoke comparisons to more modern Russia, Chinese, and western designs, which often do feature desert-focused camouflage.

Virtually no hard information exists about this tank so far, but a number of key details are readily visible. It notably has seven wheels on each side, meaning that it is longer than North Korea's other indigenous tank designs, including the most recent new type, the Songun-ho, which first emerged publicly in 2010.

A 2015 U.S. Army Threat Tactics Report on North Korea that the author previously obtained via the Freedom of Information Act describes that existing tank, also known as the Songun-915, as combining "technologies of the Soviet/Russian T-62, T-72, T-80, and T-90, and the Chinese-produced Type 88 main battle tank." However, despite continual updates and additions, it is clearly a dated design with the 1960s-era T-62 at its core, as its most evidenced by its dome-shaped turret.

The tank that appeared over the weekend has a distinctly new hull shape, at least outwardly, from those older tanks. Visually, it is similar, in broad strokes, to that of the T-14, including the presence of slat armor grills on either side of the rear of the hull where the engine is located. Slat armor is primarily intended to defeat infantry anti-tank rockets, causing their high-explosive anti-tank warheads (HEAT) warheads to detonate at a sub-optimal moment and reducing the amount of damage they are likely to produce. There are additional skirts hanging under the sides of the hull on either side to provide some additional protection for the road wheels, as well.

The turret has a distinct and more angular shape from previous North Korean tanks and has slat armor at the rear, as well. The main gun appears to be a 125mm type, likely the same weapon used on the Songun-ho and the later version of that tank's predecessor, the Pokpung-ho. The guns on those tanks are understood to be derived in some way from the Russian 2A46.

On the right side of the turret, there is a two-tube anti-tank guided missile launcher. This launcher appears somewhat similar to ones that North Korea has mounted on the top of the turrets of its existing tanks in the past and that may be used to fire "Firebird" missiles, derived from the Soviet-era 9K111.

The new tank's turret is otherwise covered in various boxes, typically associated with optics and range-finders, and has smoke grenade launchers at the rear. Most notably, however, is the addition of what appears to at least be meant to stand in for an active protection system (APS) consisting of four banks of three tubular launchers, positioned on the front corners and the left and right sides of the turret. An enclosure, which typically houses a radar sensor in similar APS systems, is positioned above each one.

This configuration overall is generally similar to that of the Russian Afghanit APS on the T-14. If the North Korean system is meant to function in the same way, it means that the sensors detect incoming anti-tank guided missiles or infantry anti-tank rockets and then fire interceptors from the tubular launchers at the appropriate moment, neutralizing the threat.

However, the positioning of the countermeasures launchers on North Korea's new tank raises questions about how much coverage this particular system offers, especially against more advanced top-attack anti-tank missiles, such as the American FGM-148 Javelin. Even the side-saddle missile launcher looks like it blocks some of the system's coverage on one of its sides. The reality is that, while the Soviet Union developed the first APS in the late 1970s, the technology behind the miniaturized radars and other sensors, as well as and interceptors found in more modern systems is complex and may still be beyond the reach of North Korea at present.

As such, it's very possible that what we're seeing on these prototype tanks is aspirational and just a mock-up of a system that North Korea is now in the process of developing. It is certainly something that the regime in Pyongyang would be interested in adding to its tanks. Countries around the world are pursuing similar efforts to integrate, or trying to integrate, APSs to their tanks and other heavy armored vehicles as anti-tank guided missiles, as well as infantry anti-tank rockets, continue to become more capable and those threats increasingly proliferate.

Despite the comparison to other tanks, such the T-14, and especially the latest version of the U.S. Army's M1 Abrams tank, it is hard to imagine that the North Korean design is anywhere near as advanced. Unlike, the T-14, for example, this North Korean tank still has a manned turret and wouldn't feature the Russian vehicle's complex remote vision system, seen in the video below, for its crew of three, who all sit together in the front hull.

When it comes to sensor, communications, and networking capabilities, in particular, this tank won't even approach that of either the T-14 or the Chinese Type 99, let alone the M1A2 SEPv3. The various boxes seen on the examples on parade could well be empty, meant to only reflect systems that North Korea hopes to integrate into the design as time goes on.

In addition, just having angular lines akin to those on the American tank also does not mean the North Korean one has anywhere near the same kind of complex composite passive armor, which includes layers of ceramics and depleted uranium, either. The armor packages for the Abrams, which have been continually improved upon over the years, are so advanced and sensitive that the development of the initial "special armor" configuration for the tank was originally conducted within a top-secret Special Access Program nicknamed Green Grape.

Since the side skirts obscure the road wheels, it not possible to tell for sure, but it seems very plausible that the underlying chassis over this new North Korean tank still owes much to old Soviet designs, as well. The Pokpung-ho, and subsequent Songun-Ho, both use an extended version of the chassis of the previous Chonma-ho, which was itself derived from the Soviet T-62. It's not hard to believe that the North Koreans built on that proven design, with which they now have great experience with, in developing this latest tank rather than starting entirely from scratch.

With all this in mind, the vehicle that North Korea put on parade is most likely to reflect what the country envisions as a "future tank" and not what they are fielding as an operationally useful design today.

All this being said, whatever its capabilities and performance, it is important to note that this new tank does highlight how North Korea's heavy machinery industries have been able to continue their work, with or without foreign assistance, in the face of international sanctions, especially from the United States. Even if a final version of this tank turns out to be heavily based on technical information acquired abroad and is full of foreign-made systems, sourced legally or illicitly, that would underscore the ability of the regime in Pyongyang to obtain the resources necessary to continue expanding and advancing the technological capabilities of its war machine.

North Korea is also known to be a relatively prolific arms exporter itself, in spite of the international community's attempts to curtail this trade. This means that this new tank, or portions of its design, may one day find its way into the arsenal of other countries that cannot afford or otherwise acquire more modern designs on the open market.

With North Korea itself calling these prototypes, it remains to be seen when, and if, they might actually enter any kind of widespread operational service and how capable those units would actually be when they roll off the production line. Still, they do show North Korea's armor aspirations and the Hermit Kingdom has proven to be successful in rapidly developing new military capabilities under Kim Jong Un. So, what may be a collection of ideas and placeholders for future technologies today, could be an operational land combat vehicle in a few years' time, in one form or another.

The War Zone will definitely keep a close eye out for any new information that may come out now about Pyonyang's new experimental main battle tanks.