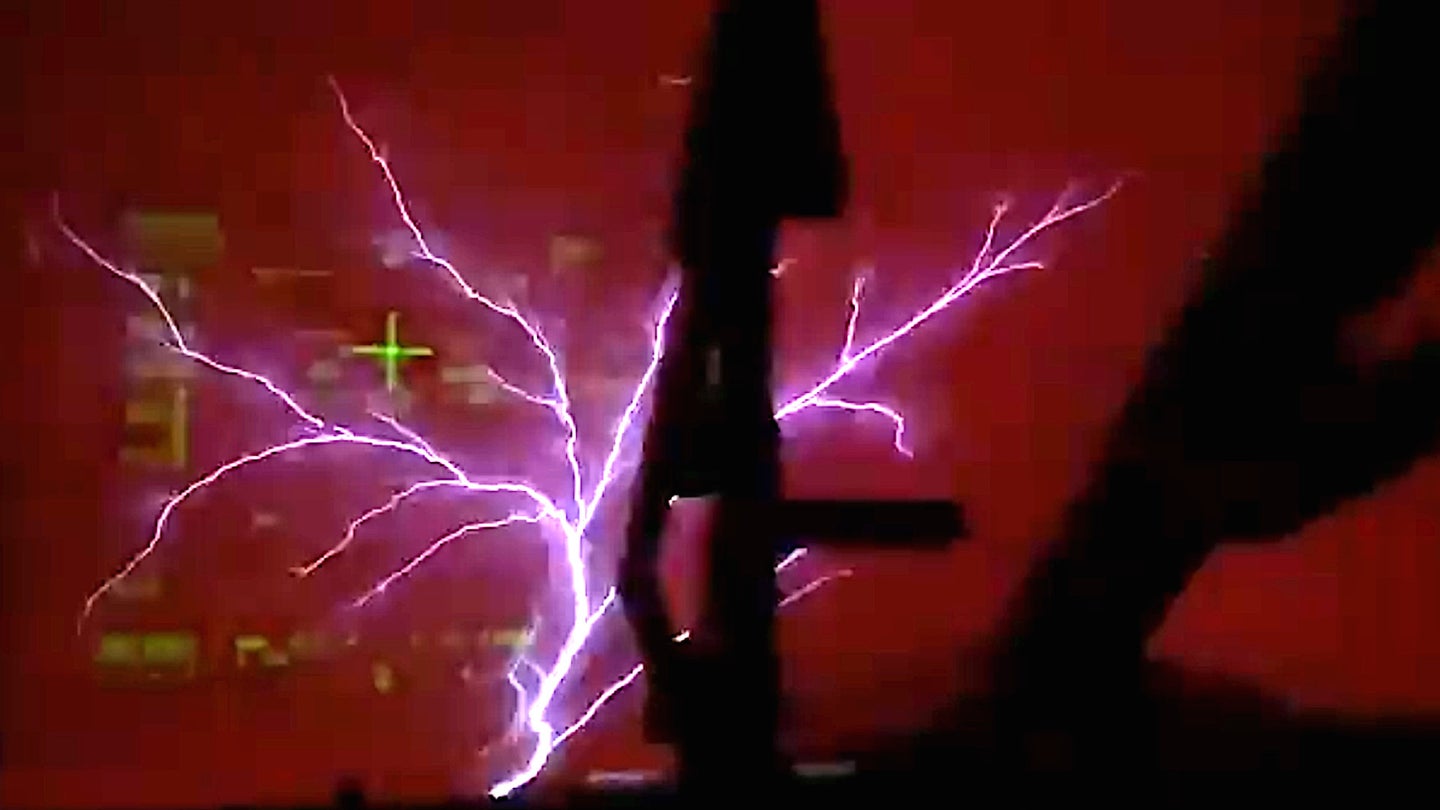 The U.K. Royal Air Force's 99 Squadron has released a brief and creepy-looking video showing a weather phenomenon known as St. Elmo's fire developing on the nose cone of one of its C-17A Globemaster III transport aircraft during a recent nighttime flight near the equator. St. Elmo's fire involves the creation of plasma in the air, which can look like fire. In this case, the flashes also briefly give the pitch-black sky an ominous red tinge the feel reminiscent of a horror movie or a sci-fi film, such as The Final Countdown, which involves the U.S. Navy aircraft carrier USS Nimitz traveling back in time after passing through an electrical-storm-like warp hole.

The clip appeared on the 99 Squadron's official Twitter account on Oct. 5, 2020. The C-17 in question was reportedly flying through the Intertropical Convergence Zone (ITCZ) at the time. Also known as the doldrums, this is a region near the equator that shifts depending on the season and is famously known for long periods without any kind of windy weather, which presents a real hazard to sailing ships that do not have some form of backup propulsion. It is also known for helping to produce thunderstorms and other extreme weather conditions.

"This is what the office looks like to a @99Sqn C-17 crew navigating their way through the ITCZ (Inter Tropical Convergence Zone) at night!" a Tweet accompanying the video read. "The electrical weather phenomenon of St Elmo’s Fire isn’t dangerous, but it usually means you’re surrounded by storms!"

St. Elmo's fire occurs when the electrical field around a pointed object is sufficiently charged to ionize the air around it, turning it into plasma. This results in a blue or violet glow and is often accompanied by lightning-like bursts of electricity, leading often to it being incorrectly called "ball lightning," which is a separate and unexplained phenomenon. The glow is often followed by a hissing or buzzing sound. There is no apparent sound in the 99 Squadron video.

Descriptions of and references to what appears to have been instances of St. Elmo's fire can be found as far back as antiquity, but the name refers to the Christian patron saint of sailors, St. Erasmus of Formia, or St. Elmo, and dates to the 16th century. While the phenomenon is well known to form around the nose cones of planes flying in areas of the sky with a high degree of electrical activity, it can also appear at the tips of pointed structures on the ground or on ships, such as masts, where mariners often took it as a divine omen.

Historically, it has been taken as a good sign, indicating the presence of St. Elmo watching over a ship and its crew, but that doesn't change how foreboding it often looks, especially in this case.

Thankfully, as the Tweet from 99 Squadron noted, this phenomenon is harmless by itself. The crew of this C-17 appears to have been able to safely navigate any thunderstorms or more extreme weather nearby and was simply treated to the light show happening in front of their cockpit.

Who needs fireworks when you have a pair of F414 afterburning turbofans, a steam catapult, and an AIM-120 missile to fire off?

There are austere airstrips and then there’s this.