The cat and mouse game of anti-submarine warfare is very high-stakes. Heres's how modern navies go about it with their surface fleets. 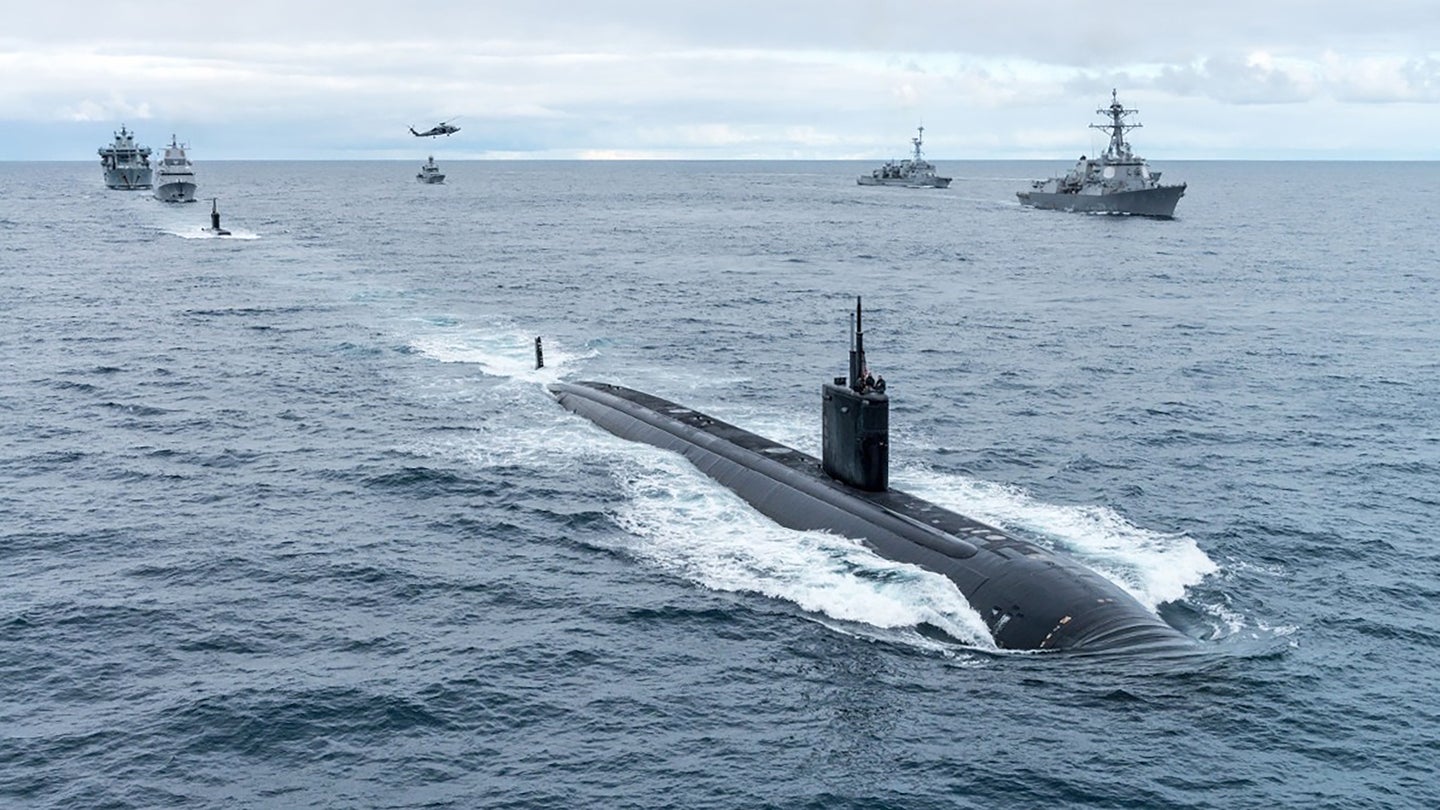 Anti-Submarine Warfare, or ASW, is an evolving practice that requires patience and coordination as much as skill and technique. The tools today's navies use are much farther reaching and more capable than the simple Cold War-era sonars. Artificial intelligence helps alert operators to potential threats. Advance oceanographic modeling of sound propagation and ray trace help plan highly effective searches across vast stretches of ocean. Complex acoustic pulses at incredible power levels push back the veil of uncertainty before a fleet.

It is in this ASW environment we will review the fundamentals of a basic submarine search, not from another submarine’s perspective, which you can read all about here, but from the point of view of a destroyer or another anti-submarine warfare-enabled surface combatant cruising atop the waves.

Searching for a submarine happens using two basic methods: active sonar search or passive sonar search. Both ways are capable techniques, but they have vastly different strengths and weaknesses.

The most common search is the full spectrum active sonar that fills the volume of water around a ship for tens of thousands of yards with acoustic energy. These updates, or 'pings,' can be 10-15 seconds apart. Each transmission maintains a boundary of sound that detects nearly everything when two or more sources (active sonars) are employed.

A single active sonar will not propagate evenly through a medium like seawater. It bends through temperature and density changes. It bounces off thermal layers as if they are solid. This creates vertical, wedge-shaped blind spots called ‘shadow zones.’ Coordinated searches with multiple active sonars can see into each other's 'shadow zones' to cover an area more effectively. Also, having numerous sonar teams searching the same site increases detection recognition probability.

Continuous Active Sonar (CAS) is a constant cycle of a looping active transmission. This sonar is very capable in complex littoral or coastal waters, but lacks the extreme range that traditional complex sonar waveforms can achieve.

Due to the high accuracy of CAS, a submarine should maintain as maximum a distance from the source as possible while keeping track of the CAS source. CAS is very easy for a submarine to localize because the active sonar will provide bearing changes over time with no gaps in transmission. This gives the trained submarine crew the CAS’s position within a few minutes of transmission.

The benefit of this kind of technique is that it requires a low-level of skill by the operator to conduct a successful search. If the sonar operator can locate the bright spot on a dark display, they can identify a detection. Artificial intelligence automatically marks these potential targets for further evaluation.

Another benefit of active sonar is that the submarine can be detected outside of its torpedo range. Early sonar detection shifts the initiative to the warship and removes the submarine's primary advantage, an attack from concealment.

Modern active sonars have directional modes. These modes give the sonar coordinators flexibility in their sonar search plan. It is not uncommon to have multiple active platforms, in this case, surface combatants (warships), assigned to specific sectors around a high-value vessel, such as an aircraft carrier. This gives each sonar team a narrower search field, increasing the chance of detection, at the cost of a single point of failure.

Several disadvantages come with this sonar approach. Coordination between the active platforms is paramount when sonar searches overlap. This technique requires shared system timing, a "T-Zero," and an accurate position of all transmitters so that they can plot the active propagation from another platform. Interfleet warfare system communication is a "Link"-type system that seamlessly integrates multiple sensors to help solve these coordination issues.

Typically, multiple active platforms operating in the same water space will use different modes to avoid interference and unnecessary confusion due to lack of proficiency or coordination. Navies that do not have this high-level of ship-to-ship integrated communication can conduct this type of search by manually triangulating detections.

Triangulation is a simple method of using another platform's sensor bearing (and range if you have it), knowing their position in relation to your own, and searching down that line of bearing. If you have contact, the tip of that triangle that crosses bearings is the submarine's position. Manual triangulation was standard during the Cold War and is still employed today.

Passive sonar simply listens to noise as it passes the array. It collects sound signals and sorts them for the sonar operator by frequency and bearing. This helps the operator classify and track the position of the sound source.

The combination of a quiet platform and low-frequency sonar arrays allows modern surface sonars to catch an unsuspecting submarine in open water. These passive methods are more time consuming as the area of uncertainty is always growing around a potential submerged target. Often, passive sonar will only receive a single transient sound on the bearing of a submarine. They mark a point at an estimated range often called the SWAG or 'Sonar's Wild Ass Guess,' but it is officially called a 'Datum.'

Datum is a point on the chart that slowly grows in uncertainty and distance over time. It is an expanding circle that ripples out in all directions like a splash on calm water. The speed at which the Area of Uncertainty (AoU) expands depends on the type of submarine. If it is a presumed Air-Independent Propulsion (AIP) submarine, the AoU grows slower than if it is suspected to be a faster nuclear sub.

With no further information other than a single bearing of a suspected submarine, the Captain has a few options. They can maintain course and speed as not to alert the submarine that it has been detected while continuing to search. They can turn towards and pursue with active or passive sonars. The final option is turning away from the datum point and call for support if available.

If the commander has ASW helicopter capability, that will most likely be employed regardless of what other actions they take. The availability of long-range ASW aircraft like the P-8 Poseidon will be more effective in cost and capability than a helicopter and could be used instead. With submerged anti-air capabilities still in an early developmental phase, today's airborne ASW hunters can search with near-immunity of being harmed by their target.

Airborne ASW begins with the datum point as its destination. As the datum expands, the helicopter races towards its center. The modern ASW helicopter is equipped with dipping sonar, sonar buoys, a magnetic anomaly detector, and torpedoes.

The first consideration is what loadout is best for the mission. Balancing fuel endurance with sensor loadout and attack capability must be configured before the task begins. A good rule of thumb is if the helicopter can get to the datum point within one hour, bring two weapons. Any longer, bring one torpedo and as much fuel as it can carry.

Once the helicopter is en route to the datum, the contact coordinator must factor in a few key variables: Submarine speed, the speed of the helicopter, sonar buoy detection range, time since detection, and finally, the time of the arrival at the datum.

Dipping sonar is the most cost-effective airborne sonar as it is not expended during a search. This makes it the most likely choice for the initial investigation. A dipping sonar will begin a series of spiral, non-disjointed dips around the center of the AoU.

A non-disjointed sonar dip is a search technique that has a small amount of overlap from the previous submerged dipping sonar search area. This overlap compensates for the time it takes to reposition the dipping sonar from one search point to the next without the submarine slipping between the two searches.

A disjointed dipping pattern has no overlap and is more efficient, but it can allow a submarine to move through coverage gaps if not performed correctly. It is ideal to employ a pattern with enough overlap to compensate for the time between dips and target speed as the helicopter spirals out from the center of the AoU.

Sonar buoys (sonobuoys) give the searching platform a much better chance of detection because they stay in the water. They are not collocated every few minutes for a new search. The deploying asset does not need to remain with the deployed sensor; it can move on to the next search point, significantly increasing the chance of detection over dipping sonars because the AoU has less time to grow.

Sonobuoy search fields are only limited by the number of sonobuoys the helicopter can carry. You can read all about how an airborne sonobuoy search is executed in this past War Zone feature.

The center ray is the general direction of motion expected from the center of the AoU. Left and right rays are angled off-center according to the submarine's expected speed; the higher the speed, the wider the angle between rays. Sonobuoys or dipping sonar is dropped on a vector at the estimated distance from the AoU center that matches the target speed.

The estimated speed is assumed based on the submarine type. Diesel submarines are expected to be slow and drop points will be near center AoU. AIP diesel submarines with energy cells are a little faster, and sonobuoys are dropped a little farther out to keep up. Nuclear submarines have the highest potential submerged speed, and the search field grows rapidly. The sonobuoy drop points are calculated on these basic estimates.

The Wedge Search is similar to the Ray Search models. The Wedge Search stays focused between two ray boundaries as it moves in the target’s expected direction. Instead of centering the sonobuoys or dipping sonar around a single line of bearing and crossing it left and right as in the Ray Search, each search area has two rays forming a wedge radiating out from the center of AoU. More effort and time are spent searching the center wedge; adjoining wedges are searched afterward. A Wedge search is suited for multiple ASW assets, but can also be conducted with a single asset.

With 18 sonobuoys and an eight-knot target less than an hour to datum, there is about a 33% chance of detection using these techniques if there are no oceanographic advantages the submarine can use, like high sea-state, a substantial layer, and topographical shadowing. Any additional factors like the target alertness, distance from AoU, and higher than expected submerged speed only reduce that chance even further.

Tom Clancy wrote, "It is wise to study the ways of one's adversary" in his 1984 novel, The Hunt for Red October. The knowledge of these types of search models will help submariners avoid detection. Still, there is always the chance a single noise like a dropped tool or a hatch shutting may kick off a determined pursuit of your position.

A submarine must look for an indication of counter detection. Warships must slow from transit speeds to deploy helicopters. If a warship is maintaining a constant range or bearing, it is time for the submarine to reposition itself or to perform a covert evasion—moving away from the active sonar as quickly and quietly as possible.

Successful Anti-Submarine Warfare (ASW) requires coordination, methodical execution, and patience. Modern sonar tools will not replace the operator’s instinct to identify and pursue suspicious detections. At sea, fleets are still defended by operators with headphones and tactical knowledge more so than artificial intelligence and algorithms. While there is a massive industry improving sensor technology, maintaining the at sea advantage relies heavily on improving the operator’s ability through better training and manpower retention.

This combination of technology and technique is how modern ASW warfare is conducted.