The President Contracting COVID-19 Is A Major National Security Crisis

There are massive and highly unique strategic implications of this situation, the likes of which America hasn't experienced before. 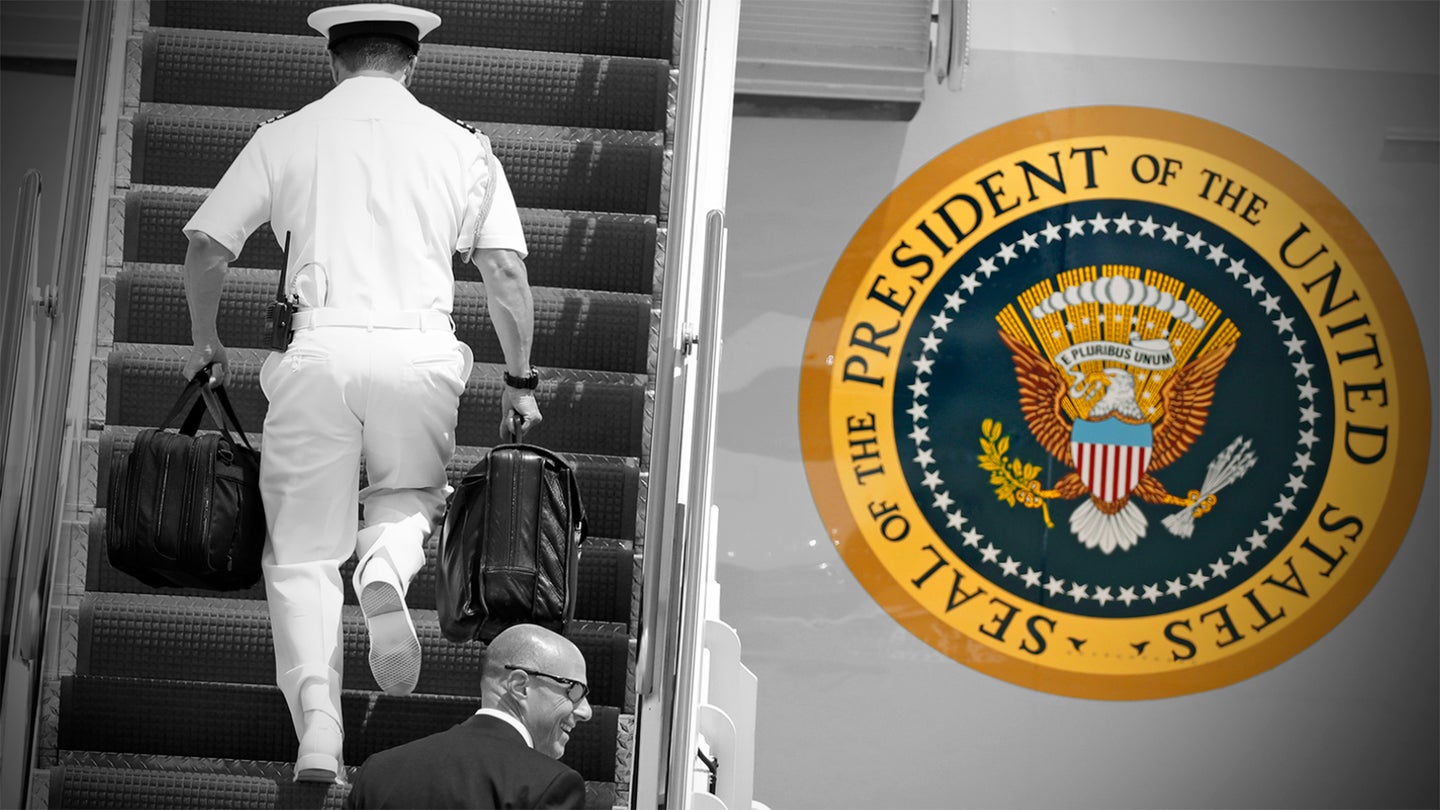 The Commander In Chief has tested positive for SARS-COV-2, the virus which causes COVID-19. No matter where you stand on the political spectrum, this is a bad moment for the country, especially in terms of the potential national security implications of this situation, one that is largely unheard of. While Presidents have been incapacitated in the past, the highly infectious and wily nature of this disease means that incapacitation is further complicated by isolation and the possibility that the same deadly virus spreads throughout the highest rungs of power in Washington. It is in this uncharted territory that America's increasingly belligerent adversaries could decide to act, taking advantage of weaknesses in the U.S. military and foreign policy decision-making chain of command.

The statement from the President's physician is shown below. While it claims that President Trump will continue carrying out his duties "without disruption" during this period of isolation and hopefully recovery, it is nearly impossible to see how this would be feasible.

At the very heart of the matter is continuity of government, and in particular, the command and control of America's nuclear deterrent. The President is followed 24/7 by a U.S. military official carrying the nuclear 'football,' a Halliburton briefcase containing a remote command interface used to order the release of nuclear weapons and connect the President to the National Command Authority. You can read all about this arrangement in this past piece of ours. The 'football' is always just seconds away from the President as the time required to make some strategic and potentially world-ending decisions during a nuclear crisis can be measured in minutes, not hours.

The President must be of clear mind to make these snap judgments, which can be impacted greatly by something like COVID-19, especially if it affects the President's health in extreme ways as it has hundreds of thousands of Americans, over 200,000 of which have died. Beyond the President's ability to fill his role within the National Command Authority, other circumstances that do not necessitate dealing with an incoming nuclear attack would make it nearly impossible for him to lead effectively and in a sustainable manner while diagnosed with COVID-19.

A huge part of continuity of government operations, in particular those related to the resilience of the President and his cabinet, have to do with being able to be quickly whisked away in a crisis to a safer location that is equipped with advanced command and control capabilities. HMX-1, the Marine squadron that flies Marine One, is on standby at Naval Support Facility Anacostia, located just three miles from the White House, ready to scoop-up the President and move them to a number of alternative operating locations, including Raven Rock, Mount Weather, Camp David, Air Force One, or an E-4B Advanced Airborne Command Post, among others.

In this particular case, this would require the President carrying a highly infectious disease to fly in enclosed aircraft and to operate in facilities that are by their very nature 'buttoned up' in order to keep the pandemic from taking the entire facility offline, which would be an unthinkable weakness in America's security. You can read all about the extreme measures that have been put in place at these highly-secure hardened command centers in the age of COVID-19 in this past War Zone exclusive. As such, bringing an infected President into such an environment would compromise its very mission and set up a ticking clock, since it could eventually be unable to execute that mission for some time due to contamination and illness among its staff.

The reality is that even for far less extreme crises and emergency situations, the same issues apply. During a less severe incident, the President would occupy the Situation Room, which is not a highly hardened facility, but it is notoriously cramped and crammed with the Executive Branch's key decision-makers and military leadership. During an event where the White House would need to elevate its security posture, the President, their cabinet, and their family will descend into the Presidential Emergency Operations Center (PEOC). This is an actual bunker buried beneath the White House. You can read all about the PEOC and its expansion in this past post of ours. In the case of the PEOC, you are living inside a tight, fully enclosed environment, with the top leadership of the country working shoulder to shoulder. It is tight quarters on a normal day. It would be an absolute nightmare during a pandemic that has penetrated into the White House.

All of this bleeds into the realm of the U.S. government's worst fears and darkest emergency planning, but what is important to understand is that under these conditions, it is not a flexible regime. These facilities and measures underpin the very credibility of our nuclear deterrent. If they were weakened or made unavailable, America's ability to deter a nefarious act before it would occur is degraded significantly. It is truly a game with the highest imaginable stakes.

This stark reality sits adjacent to the very real possibility that many in the White House could be infected at this very moment, some of which have been highly present on Capitol Hill as of late in support of various initiatives, including the nomination of Supreme Court Justice candidate Amy Coney Barrett. These folks, including Barrett, have been meeting with many lawmakers in recent days. Other White House staffers have been meeting with Speaker Pelosi, who is third in the line of succession for the Presidency, and Senate Majority Leader Mitch McConnell and more. So, you can see how the President, who is the most surveilled for the virus of pretty much anyone in the country, could just be the tip of the iceberg, so to speak.

Even Vice President Mike Pence, who would assume the President's duties under this situation, isn't in the clear. Reports state he was in the Oval Office with Trump just two days ago and has had many other contacts with White House staffers since then. If Pence was infected, the entire issue becomes far, far direr. We can only hope this is not the case. Still, if Pence isn't infected, what do you do with the Vice President going forward? Do you sequester them at a secure location until the possible wave of infections within the Executive Branch clears? It really becomes an existential question for the administration, one that is far more complex than when Reagan was shot or other instances where the same debilitating impact on POTUS couldn't be invisibly transmitted to VPOTUS, even by a third party.

Of course, all of this comes as America is in the process of the most bizarre election in modern history. One that the pandemic has already cast a dark shadow upon. Like Trump, Joe Biden is in the very high-risk pool statistically for this disease. Trump and Biden shared a stage just two days ago, where they were projecting loudly without masks. Although they were separated, we don't know at this time the exact risk of infection under such circumstances, but you can bet Biden is getting tested, as well. What would come of the election if both men were infected? These are questions that seem ripped from a political thriller, not reality, but these are indeed the strange circumstances we are living through today.

With foreign adversaries, especially peer states like China, already pushing the boundaries in highly tense regions, it isn't any leap of the imagination to see how they would leverage the current uncertainty to their advantage. What time is better than now? This is the prevailing logic of America's foes. As a result, be prepared to see unique strategic military posturing in the coming days by the U.S. military, especially in contested regions. At the same time, we must be aware that aside from the handful of people that follow global military patterns very carefully, everything will look like something ominous and new, even though it may be business as usual. In other words, expect a large serving of hyperbole, fear-mongering, and poor analysis on strategic events in the days to come.

With all that being said, we have entered into yet another body of uncharted political and strategic waters, one in which the usual continuity of government and strategic command and control measures may be a square peg for a round hole. In fact, without significant alteration, they may work counter to the stability that they were designed to instill, even under the direst of circumstances.

Ideally, Pence is uninfected and Trump will willingly pass strategic decision making to him. This can be done while Pence is sequestered in a safe and highly controlled environment, at least until the President has beat the illness and can return to a normal work habit where he doesn't endanger others just by going about his business.

If this is not the case, some very tough decisions are going to be needed to be made, and fast. But even if it is, choices as to how the White House will operate in the immediate term so as to limit the spread of the virus will be critical in also reducing the extent of the national security fallout from this troubling news.