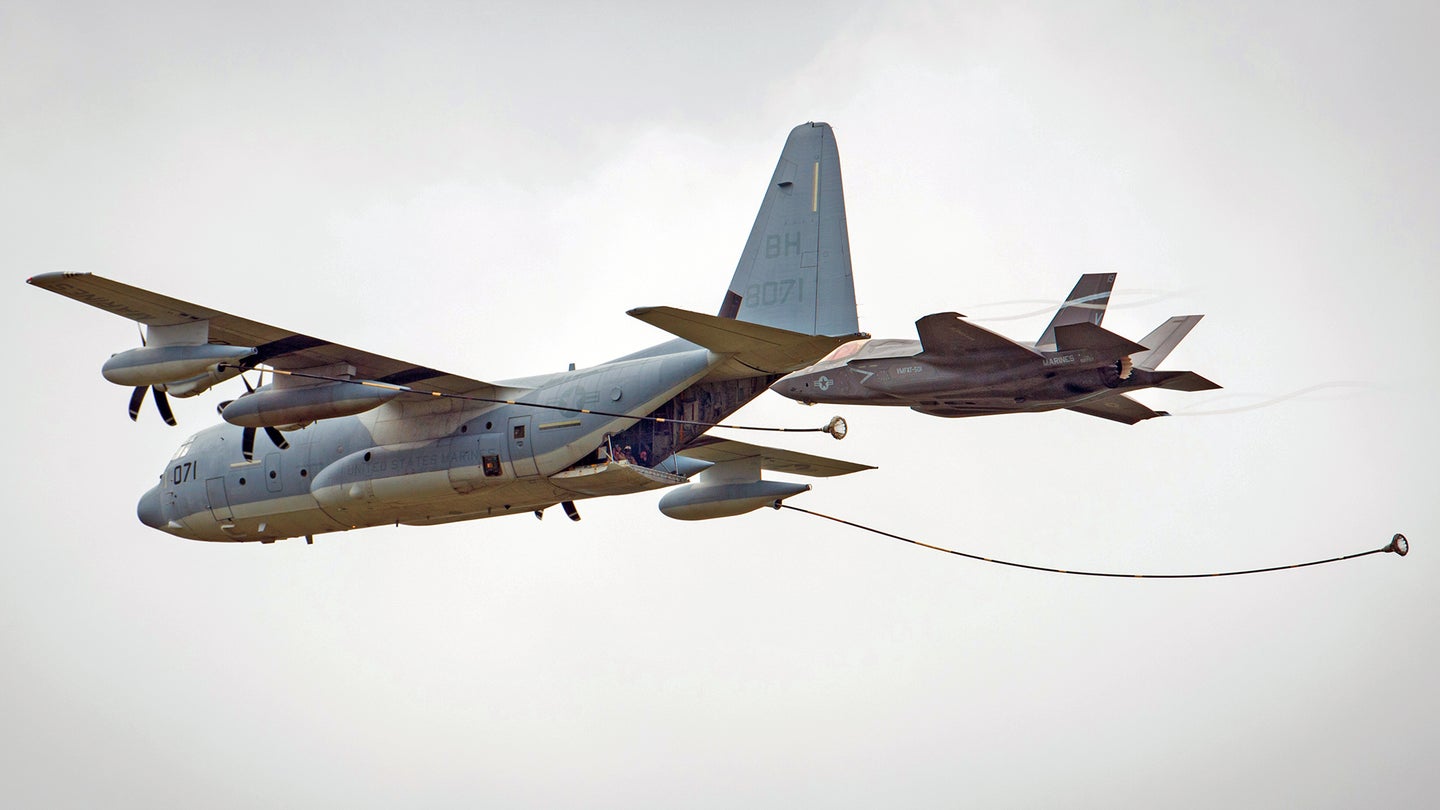 In the early evening on September 29th, 2020, The War Zone was among the first to report on the collision between a USMC KC-130J Hercules tanker-transport and an F-35B Lightning II fighter from the same service in a military operating area (MOA) adjacent to the Salton Sea in Southern California. The Marines confirmed that the F-35B pilot safely ejected and the KC-130J made an emergency landing and everyone on board survived. Now, thanks to recorded air traffic control audio, we can hear exactly what communications were like before and after the collision occurred, as well as learn a number of new details about the mishap.

The audio was posted by JetScan1 over at LiveATC.net, you can listen to it for yourself here.

The KC-130J, which belongs to VMGR-352 "Raiders" based at nearby MCAS Miramar, was flying under the callsign RAIDER 50. In the recording, RAIDER 50's crew requested to LA Center to fly into the high altitude block of the Kane West MOA, which sits mainly on the west side of the Sulton Sea, but also crosses over it at its midpoint. The MOA was active at the time, but the KC-130J crew was aware of the other traffic. They were cleared to enter into it at 17,000 feet.

Next, we hear LA Center reply to American Airlines Flight 237 that saw some sort of explosion on the ground near where it was flying over. Immediately after we hear RAIDER 50 declare an emergency:

"LA Center LA Center, RAIDER 50 declaring an emergency, midair collision with VOLT 93. We have two engines out, we're leaking fuel, and likely on fire, and in emergency descent at this time. RAIDER 50."

The controller at LA Center then tries to confirm the KC-130 is in the Kane West MOA and asks to clarify if they are indeed "going down now." RAIDER 50 comes back on frequency back and states:

"We declare an emergency. We still have partial control of the aircraft. Two engines out. We are aiming towards uh..."

RAIDER 50 then cuts out and the controller asks for clarification if they are heading towards NAF El Centro or the airport at nearby Imperial, both of which are located to the south of Kane West MOA. The controller tries to raise them again, but there is no response.

Another voice comes on repeating that they think they said they had a mid-air and have two engines out. N979CF, a Hawker bizjet, states that they don't want to clog the frequency and describes that there is a plume of black smoke on the ground in the Kane West MOA and notes it came into sight about the time RAIDER 50 called in the emergency. He adds "there's at least one aircraft down it looks like."

LA Center thanks the voice and another comes on and says "impact looks like it was prior to his last transmission."

RAIDER 50 is once again talking to LA Center, but they cannot be heard in the recording, likely because they had dropped significantly in altitude. The controller asks RAIDER 50 to clarify that they were attempting to head to Thermal, an airport located just beyond the northern edge of the Salton Sea. That is confirmed. Then the controller says "RAIDER 50, I understand you are about 20 miles away and you are looking for the winds, let me get the winds for you. The wind is 150 at 08 knots."

RAIDER 50 then confirms engines number four and three are out and that they have the airport in sight at about 15 miles out. The controller then gives them a number to LA Center to call on the ground once they land and passes the airport's UNICOM frequency to the crew.

That's where the recording cuts off. We know the aircraft didn't land at Thermal, it ended up in a farmer's field, badly damaged, on its belly, but still overall intact. Everyone survived.

Truly amazing work by the crew.

The professionalism and relative calm that is showcased in this recording by all those involved is truly remarkable.

Although we only have limited details about this mishap, one thing is clear, RAIDER 50's crew has one hell of a story to tell.

We have video of the F-35B careening into the ground and updated info on this incident in this new post. Future updates will be posted there.

Edit note: Made change that the Hawker bizjet was saying they didn't want to clog the frequency, it was not someone else saying that.