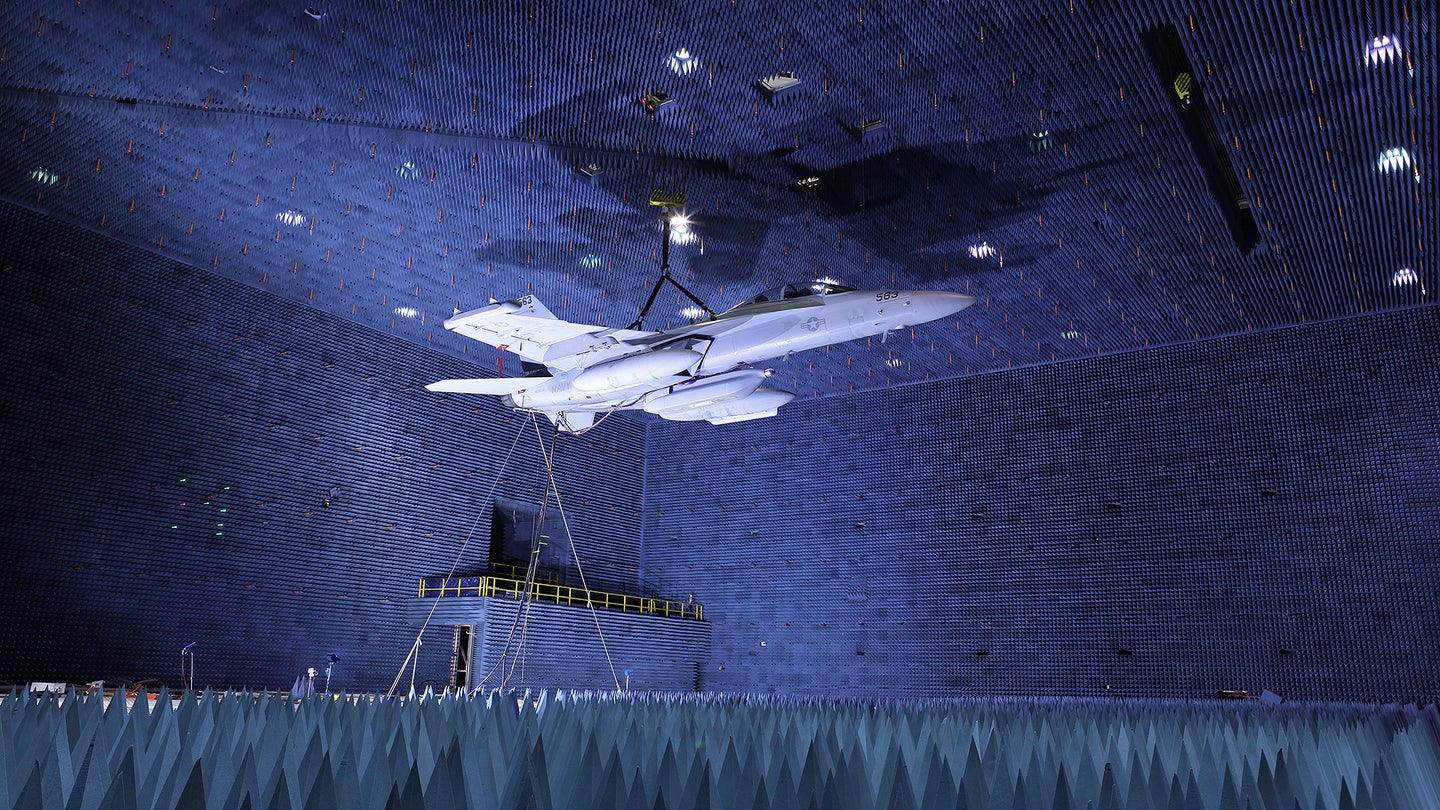 Work is continuing on the Next Generation Jammer-Low Band pod, or NGJ-LB, for the U.S. Navy. This is just one part of the larger Next Generation Jammer effort that will provide the service's EA-18G Growler electronic warfare aircraft with new, advanced capabilities, which you can read about more in this previous War Zone piece. Work on the NGJ-LB this year has including testing a prototype system at the Naval Air Systems Command's science-fiction-looking anechoic chamber at Naval Air Station Patuxent River in Maryland.

The anechoic chamber is one of the components of Naval Air Systems Command's (NAVAIR) larger Air Combat Environment Test and Evaluation Facility (ACETEF). The Navy approved the release of the picture of the EA-18G with Northrop Grumman's Demonstration of Existing Technologies (DET) prototype of the NGJ-LB pod, earlier this month, but did not say exactly when the tests had occurred. A previous NAVAIR press release in June 2020 stated that this testing was already complete by then.

Anechoic chambers, some of which are absolutely giant, are designed to eliminate any ambient electromagnetic radiation, allowing for more accurate testing of how different electronic systems on an aircraft may or may not impact each others' functioning. The emissions from one or more systems could interfere and have very negative impacts on others, which could in turn limit their functionality when they are needed most. It could also potentially prove dangerous if unexpected issues crop up during an actual flight test.

A combination of black and blue-colored pyramid-shaped polyurethane and polyethylene spikes on the walls, ceiling, and floor, together with RF absorbing material, help deaden any electromagnetic waves in the chamber. The aircraft, in this case an EA-18G with the DET NGJ-LB pod, is then suspended from the ceiling in the middle of the room.

The pod itself looks very similar to the one it replaces, as opposed to the new mid-ban jamming pod, which looks more like a missionized fuel tank than its more streamlined predecessor.

When it comes to developing electronic warfare systems that are deliberately meant to hamper the transmission of certain kinds of signals, this kind of testing is especially important. The EA-18G Growler's existing AN/ALQ-99 pods, which Northrop Grumman originally designed specifically for the EA-6B Prowler, required modifications to prevent them from scrambling the plane's own AN/APG-79 active electronically-scanned array (AESA) radar, as well as other systems.

In March 2020, NAVAIR had announced that the Next Generation Jammer-Mid Band (NGJ-MB), which Raytheon designed, had completed its developmental testing, including its own trip to ACETEF's anechoic chamber. That system, also known as the AN/ALQ-249(V)1, had suffered notable setbacks, including concerns about significant drag from the pod and the system's Effective Isotropic Radiated Power (EIRP). EIRP is a measure of how efficiently an antenna is transmitting and, by extension in this case, how capable the system is at jamming a target's emissions. You can read more about these issues in this past War Zone story.

Both the NGJ-LB and MB systems have undergone testing at ACETEF's Facility for Antenna and Radar Cross Section Measurement (FARM), which is also at Patuxent River. As its name implies, this outdoor site is used to measure the effectiveness of antennas on aircraft and other airborne systems, as well their radar cross-sections.

An EA-18G carried a prototype NGJ-MB pod aloft for the first time in August 2020. It's not clear when the NGJ-LB pod may see its first flight, but the system began its final round of Demonstration of Existing Technologies testing in May.

The Navy is also still in the process of deciding on which prime contractor will build the Block 1 NGJ-LB systems. L3Harris was working on a competing podded system, no pictures of which have yet been seen.

In 2018, Northrop Grumman also announced that it was working with the Harris Corporation on its design. Last year, L3 and Harris completed their merger, which means that Northrop Grumman is now both working with L3Harris as a supplier, while also competing against that company's own separate NGJ-LB team for this contract.

The complete NGJ family of systems, which could also eventually include a high band pod, is set to eventually replace the various components of the AN/ALQ-99 system, all of which you can read more about in this previous War Zone piece.

The successful completion of testing of the NGJ-LB and MB pods in NAVAIR's anechoic chamber was a key part of moving the development of these systems, which will give the Navy's EA-18Gs important new capabilities, along.

Author's note: This story has been updated to clarify the relationship between Northrop Grumman and L3Harris with regards to the NGJ-LB program.