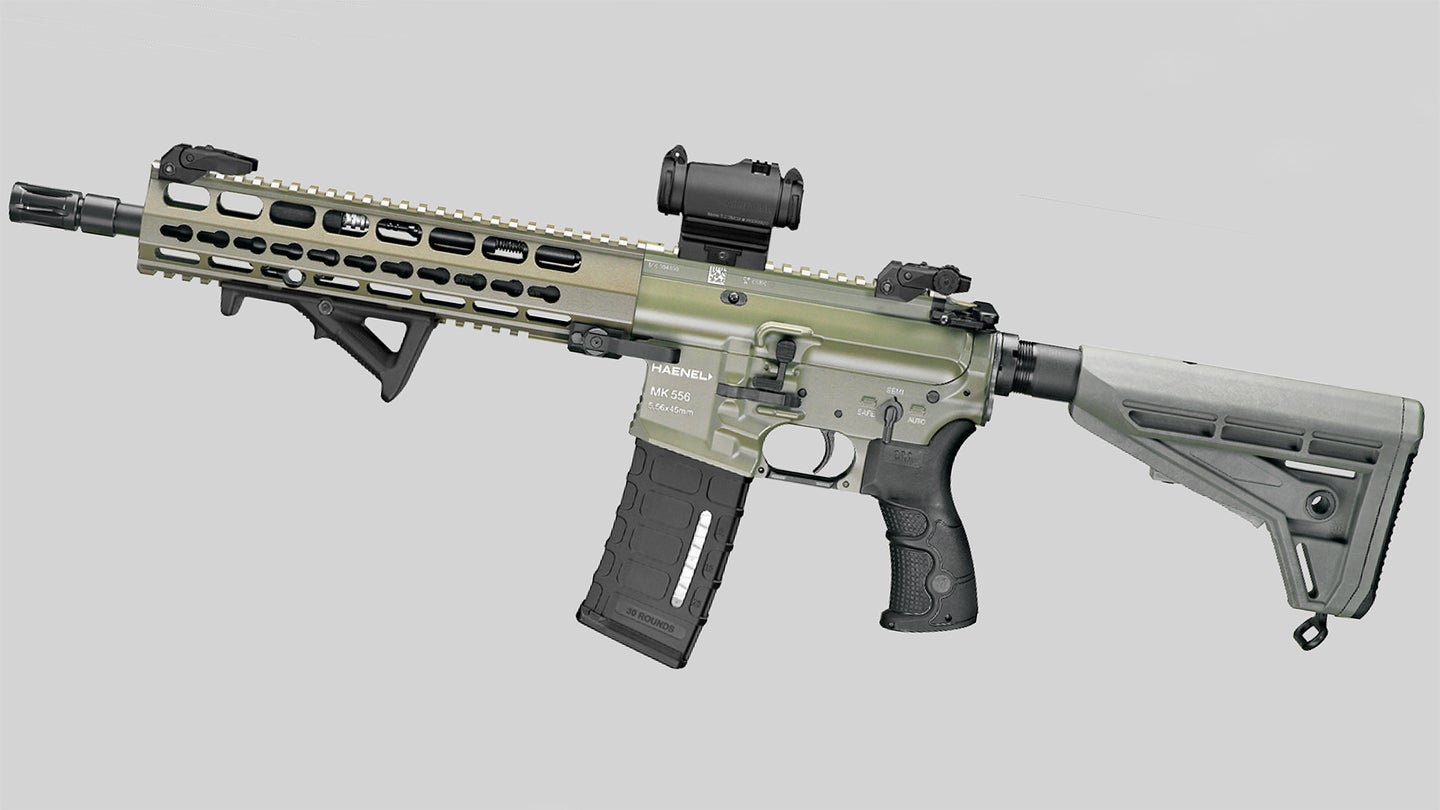 In a surprise move, Germany plans to ditch its Heckler & Koch G36 rifle in favor of a new weapon from a lesser-known local manufacturer, C.G. Haenel. The decision on the future assault rifle was disclosed yesterday, September 14, 2020, by the Germany Defense Ministry, during a session in Berlin’s federal parliament.

The weapon that’s been selected is Haenel’s fully automatic AR-15/M4 patterned MK556 in 5.56mm caliber. A semi-automatic version of the same weapon, the CR223, is already used by certain police forces in Germany and law-enforcement agencies in other countries.

The defense ministry confirmed the decision today, September 15, 2020. However, it’s possible that the selection will be subject to a protest or a judicial review before a contract is formally awarded. Heckler & Koch released an official statement confirming that neither of its offerings — the HK416 and the modular HK433 — had been accepted.

“Subject to an extensive legal review, we regret this decision,” said Heckler & Koch’s CEO Jens Bodo Koch. “At the same time, we are absolutely convinced of the quality of both the HK416 and the HK433. This quality was also confirmed to us by the Bundeswehr within the framework of the tender. With our products, we do not need to fear any competitors.” Koch added that the firm would now “examine the legality of the decision in detail and examine all judicial opportunities.”

Germany’s successor to the G36 is being procured under a program known as System Sturmgewehr, or Assault Rifle System. This tender was launched in April 2017 when the German Armed Forces (Bundeswehr) specified a requirement for up to 120,000 new rifles at a cost of around €245 million. At the time, the first deliveries of series-manufactured weapons were planned for the third quarter of 2020. The tender followed a directive from the then German Defense Minister, Ursula von der Leyen, after extensive criticism of the G36 rifle, which had been introduced by the Bundeswehr back in the mid-1990s.

The catalog of faults associated with the G36 included problems when operating when hot (i.e. after prolonged periods of firing) or during rapid changes in ambient temperature; these resulted in decreased accuracy. While the Bundeswehr confirmed that no soldier had actually been endangered as a direct result of the G36’s deficiencies, user experience — especially on foreign operations — highlighted a significant degree of dissatisfaction with the weapon, particularly in conditions of dust, heat haze, or crosswinds.

The System Sturmgewehr requirement for the new rifle specified either 5.56 x 45 NATO or 7.62 x 51 NATO calibers and interchangeable long- and short-barrel versions of the rifle. The weapon had to have ambidextrous features for left- or right-handed soldiers and a maximum weight of 7.9 pounds without the magazine and optics. The gun’s housing was required to have a lifetime of at least 30,000 rounds fired, while the barrel life called for a minimum of 15,000 (NATO ball) or 7,500 (armor-piercing) rounds fired. Among the accessories specified were a bayonet, silencer, drum magazine, and bipod.

Based in Suhl, a traditional center of small arms manufacture, in the eastern province of Thuringia, Haenel was originally established in 1840. Before the reunification of Germany, the firm operated in the German Democratic Republic (GDR) as the VEB Fahrzeug- und Jagdwaffenwerk named after Ernst Thälmann, the interwar leader of the Communist Party of Germany. During the Cold War, it was engaged in the licensed manufacture of Kalashnikov assault rifles for the GDR and foreign clients. Finally, in 2008, it resumed operations as a start-up under the historic Haenel name. Today it’s a part of the Merkel Group, in turn, a component of the Tawazun Holding based in the United Arab Emirates.

Haenel has already gained some experience in producing firearms for the post-reunification German Armed Forces, which have used its G29 sniper rifle since 2016. However, the bulk of the Bundeswehr’s rifles, machine guns, and other personal weapons have for many years been provided by Heckler & Koch, based in Neckar, southwest Germany.

Haenel’s MK556 — the MK stands for “Maschinenkarabiner,” or machine carbine — was first unveiled in 2017 and owes much to the design of the American AR-15/M4, although it uses a gas piston system for cycling instead of the direct impingement arrangement found on the traditional AR-15/M4/M16 family of rifles. The piston configuration is becoming more common these days for higher-end AR-15/M4 patterned rifles, as it brings the same adaptability and ergonomics of the AR-15/M4, but with enhanced reliability, especially when run for longer periods of fire and in harsh environments without cleaning. HK’s HK416 family of rifles, including the HK433, also uses the gas piston arrangement, as do an increasing number of small arms manufacturer's offerings, such as Sig's MCX series.

According to a report from the Deutsche Presse-Agentur (DPA), extensive tests demonstrated that the Haenel design is “somewhat better” suited to the System Sturmgewehr requirements than its rival from Heckler & Koch and is also cheaper.

Other companies that were expected to take part in the bidding process included a joint venture between Rheinmetall and Austria’s Steyr-Mannlicher (offering the RS556 rifle), plus Sig Sauer (SIG MCX), but both withdrew. According to Die Zeit newspaper, Sig Sauer was unhappy with what it saw as unfair treatment in the process, resulting in limited access to test ammunition.

The latest news from Germany is undoubtedly a blow to Heckler & Koch, which began supplying its first G3 assault rifles to the West German Armed Forces in 1959. More recently, however, the company has won significant contracts to supply its HK416 assault rifle to France and Norway. The same rifle is a popular choice among armed forces in the United States, where it was made famous when used by SEAL Team Six in the raid that killed Osama Bin Laden; it has since been adopted by the U.S. Army and Marine Corps.

So what happens next for the Bundeswehr’s new rifle? According to Soldat & Technik magazine, the G36 successor will be procured in four lots, a deal for the first of which should be negotiated in the federal parliament at the end of 2020. The remaining lots will then follow, together with related laser sighting modules and weapon optics.

Thereafter, Haenel will face a tough job to dislodge Heckler & Koch as the preeminent supplier of small arms to the German Armed Forces. But if it succeeds in its bid to replace the G36, the company will certainly be on the right path.