We looked into the story behind how an F-117 ended up shoulder-to-shoulder with an F-15 in the NORAD alert facility at Portland International Airport. 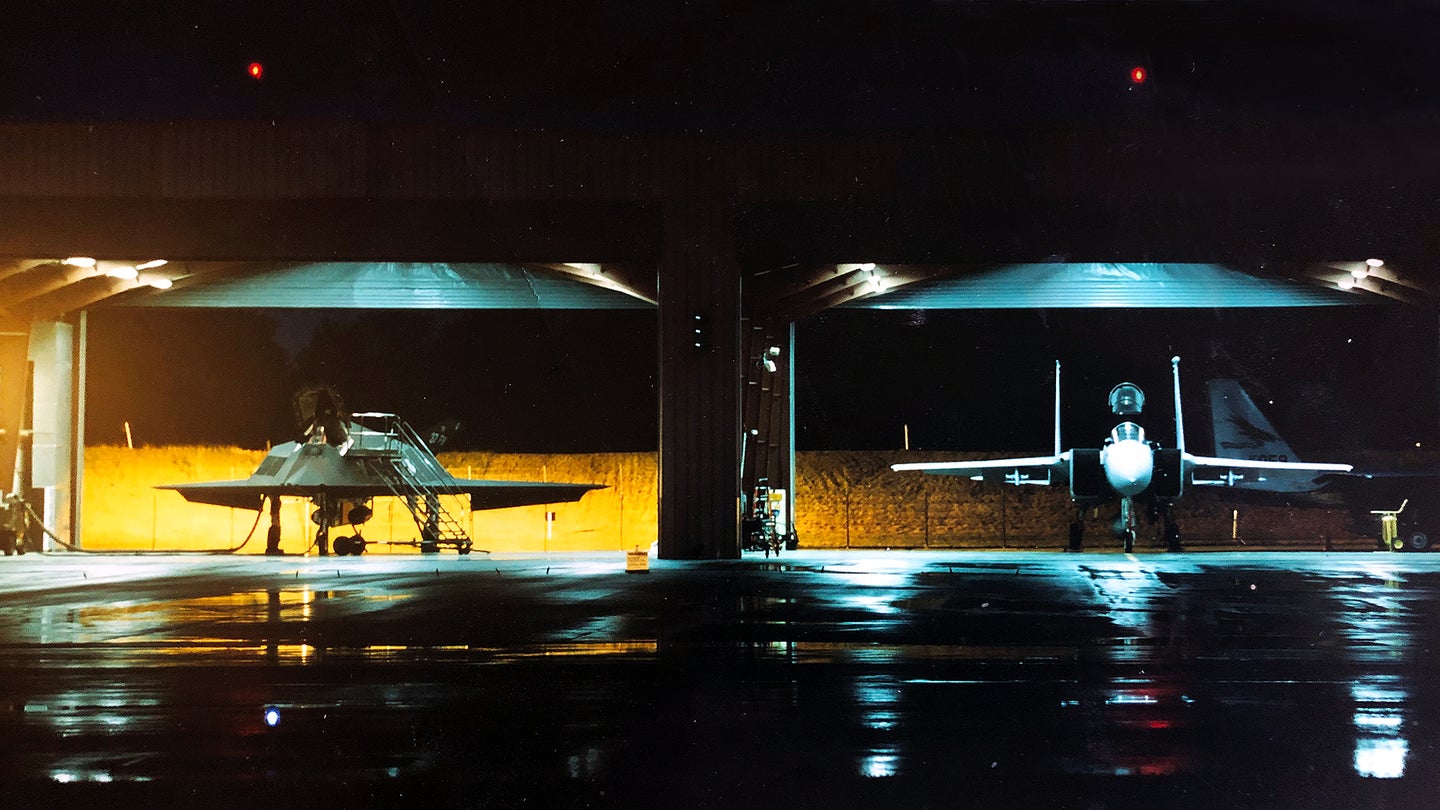 The Oregon Air National Guard's 142nd Fighter Wing is one of the world's premier fighter units. Flying the F-15C Eagle, their mission is strictly air-to-air. The Wing's Eagles can be seen roaring out of Portland International Airport on a near-daily basis, oftentimes giving those in the passenger terminal a jaw-dropping surprise. With the USAF's only F-15C/D training unit in Klamath Falls, Oregon is definitely Eagle country, which is why it was so odd to see the stunning image above.

Portland Air National Guard Base, which is adjacent to Portland International Airport, gets its fair share of visitors. Often times F-16s and F/A-18s will grace the ramp there for dissimilar air combat training (DACT) with the resident Eagles. The huge ranges off the Oregon Coast offer one of the biggest playgrounds in the continental U.S. for dogfighting. Airlifters, tankers, and helicopters will also come and go from the base, and Atlantic Aviation, the fixed base operator (FBO) on the other side of the airport, gets more of the transient tactical jet traffic these days. But still, seeing an F-117 Nighthawk stealth attack jet sitting beside an F-15 not just on the base, but in the installation's NORAD alert barn, is odd, to say the least.

Traditionally, F-15s sit armed and ready to take off within a few minutes at the highly secure complex on the southeastern corner of the airport. They can intercept a wide range of aircraft over a huge area, down into northern California, all the way up into British Columbia, in just a matter of minutes if called upon to do so. And those calls do indeed come more often than most realize.

The picture at top of this story comes to us from Sean Phillips, an aviation photographer that goes by @Big_Seans_Aviation on Instagram, who was given it years ago from a family member who was in the Air National Guard. Even though the F-117 is still remarkably active considering it was retired over a decade ago, the image is old. It appears to have been shot on 35mm film and the alert Eagle in the image is not anywhere near as heavily armed as what we see today in the post 9/11 era. This points to the image having been taken back in the 1990s, after the existence of the F-117 was publicly disclosed, but before the tragic events of 9/11 that dramatically changed the Air Force's alert posture across the country.

Sticking the F-117 in the alert barn makes some sense for that era as it was (and still is) the most secure area capable of hosting an aircraft on the entire base, with its own security patrols and multi-row fencing. As such, it would have served as the perfect cocoon for the still highly sensitive stealth jet.

We reached out to the 142nd Fighter Wing to see if they had any idea when the shot was taken and under what circumstances. Their public affairs folks along with their historian came up with an answer.

Apparently, the F-117 was the star of the 1993 Rose Festival Air Show at nearby Hillsboro Airport. At the time, the Rose Festival Air Show was one of the best in the country. The jet was staged at PDX for its flyovers due to security and runway length requirements. Here is the document the 142nd Fighter Wing dug-up about what would have been, at the time, a very special, albeit somewhat alien visitor:

So that is the story of this moody image of the F-117 nesting with an F-15 of the 142nd Fighter Wing. There actually may be at least one other time an F-117 visited the base, which may have been the result of an in-flight emergency while it was transitting to another locale, but that story doesn't come with gorgeous photographic evidence.

Author's Note: A big thanks to Sean Phillips for sharing the shot with us. Be sure to check out his Instagram, he has some sweet PDX action on there and more.