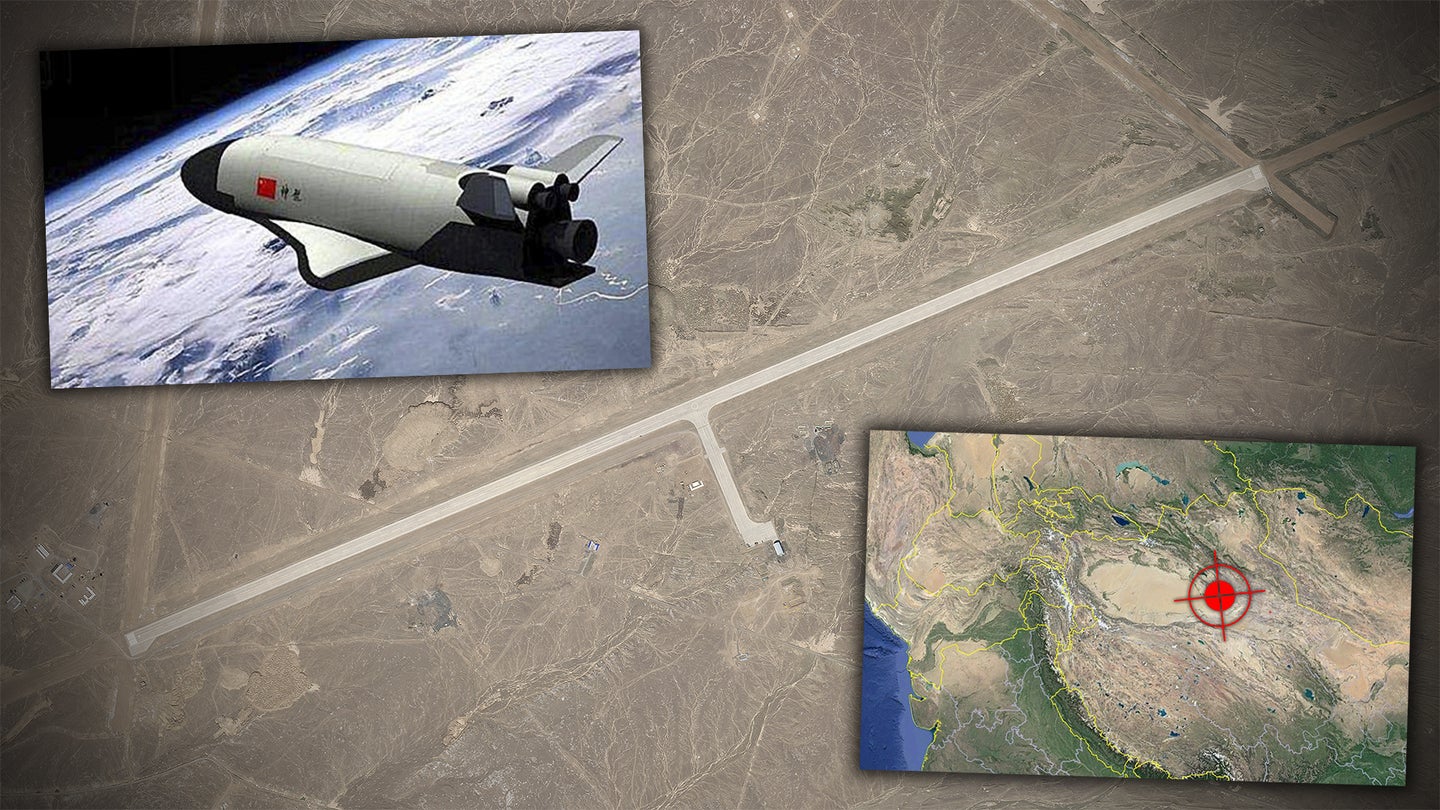 Satellite imagery that The War Zone has obtained from Planet Labs and other data suggest that China's recently tested experimental reusable spacecraft may have touched down at a remote air base with a massive runway near the Lop Nor nuclear test site in the northwestern portion of the country this weekend. The object's return to earth occurred after spending approximately two days in orbit. This strongly points to the secretive craft being a spaceplane of some kind that lands on a traditional runway. The U.S. government has also now cataloged two new as yet unidentified Chinese objects in space, which could be small satellites, that appear to be linked to this spacecraft's brief trip.

China launched the spacecraft, about which little is known, from the Jiuquan Satellite Launch Center located in the Gobi Desert, also in the northwestern end of the country, on Sept. 4, 2020. You can read more about what kind of craft this might be and its potential uses might be in The War Zone's initial reporting. Chinese authorities announced that whatever it was had returned to Earth on Sept. 6.

reported from Jiuquan that the spacecraft had returned as planned, but did not actually say where it had touched down. Jonathan McDowell, an astronomer at the Harvard-Smithsonian Center for Astrophysics, was among those that noticed the possible connection to the air base near Lop Nor, which has a runway more than 16,400 feet long, or over 3 miles in total length, making it one of the longest in the world. He said the available data indicated that the craft orbited along a path that eventually took it right over the site for its final orbit.

A high-resolution satellite image of the base in question that The War Zone obtained from Planet Labs dated Sept. 8, does not show anything that appears to be a spaceplane, but heavy equipment is visible at the northern end of the runway. These items are then missing from a subsequent image of the site.

There is also a relatively tall hangar, measuring roughly 150 by 80 feet, at the central portion of the base of the highly remote base, that could conceal the spacecraft the gear needed to ready it for transport. There is also what could be a smaller shelter, with a red-colored top, on the ramp, that sits adjacent to the hangar.

There a number of large and small vehicles that are also visible, along with various structures that sit off the runway and taxiway. Outside of supporting a mission like this, it isn't clear what the reason would be for this base existing, especially considering its limited ramp space paired with its huge runway.

Below is the full image of the base near Lop Nor, although downsized. You can check out the full-resolution version of the image here.

A lower-resolution image of the same base from Planet Labs taken on the morning of Sept. 6, the day the spacecraft returned to Earth, likely taken not long after its landing, also shows a line of what could be vehicles on the runway itself. There is also something else on the runway's centerline that could potentially be the craft itself.

Like NASA's Space Shuttle or the U.S. Air Force's X-37B, the latter of which you can read more about in these previous War Zone pieces, a similar Chinese spaceplane would likely sit on the runway for some time after it is recovered as it is serviced, its volatile fuels are removed, and it is readied to be towed to a safe spot for unloading and processing for transport.

Given the official statement that the spacecraft landed at Jiuquan, it's also possible that this base in the vicinity of Lop Nor was an alternate landing site in case of an emergency or some other issue such as weather. This is a common practice for space programs involving craft designed to return to Earth. For example, the NASA's space shuttle program similarly identified and maintained dozens of potential airstrips that the orbiter could use, if necessary.

Either way, this potential link between China's experimental reusable spacecraft and this base further suggests China launched a spaceplane in the same vein as the secretive X-37B mini-space shuttle. This kind of aerospace vehicle would need a long traditional runway to land on and this airstrip would provide ample distance for an experimental design to safely come to a stop.

There was already other evidence pointing to the experimental spacecraft being a spaceplane design. This includes the unusually large payload fairing seen on top of the Long March 2F carrier rocket before launch, which also appears to have required modifications to the launch site.

If China's reusable space vehicle isn't a spaceplane configuration, it is possible that a capsule-like reusable spacecraft could also have landed in the desert near the air base. Doing so would allow ground personnel to stage nearby and quickly make their way to the vehicle before securing it and taking it back for to airfield to prepare it for transport.

Still, a reusable space shuttle-like craft would be ideal for rapidly deploying small satellites, and any other payloads, in space. It's possible that China's experimental design did just that on its recent brief orbital journey.

On Sept. 6, Space-Track.org, an online space launch database that the U.S. military's Combined Space Operations Center and the U.S.-Canadian North American Aerospace Defense Command maintain, added a new entry, labeled 2020-063G. At the time of writing, this object is still listed as "TBA," or "to be assessed" and there is no date for when it appeared in orbit.

The entry's code links it to 2020-063, which is the base identifier for the Chinese experimental spacecraft launch. 2020-063A was the craft itself, while 2020-063B was the body of the Long March 2F space launch rocket. The U.S. military assessed objects 2020-063C through F to be debris from the launch.

It will be interesting to see if the U.S. military eventually updates this entry or otherwise speaks to it publicly. A number of small, highly maneuverable Russian "inspector" satellites have been observed in recent years deploying other, even smaller satellites. In July, Time published a piece on the U.S. military's newest branch, Space Force, in which Chief of Space Operations General John "Jay" Raymond, that service's top uniformed officer, publicly declared at least one of these events to have actually been a test of an on-orbit anti-satellite weapon.

China's experimental spacecraft launch and the appearance of this unknown additional object in space follow the release of a Pentagon report that highlights that the Chinese are pursuing similar capabilities. "The PLA [People's Liberation Army] continues to acquire and develop a range of counterspace capabilities and related technologies, including kinetic-kill missiles, ground-based lasers, and orbiting space robots, as well as expanding space surveillance capabilities, which can monitor objects in space within their field of view and enable counterspace actions," this review of Chinese military capabilities, which is produced by law annual for Congress, said.

"China has built an expansive ground support infrastructure to support its growing on-orbit fleet and related functions including spacecraft and space launch vehicle (SLV) manufacture, launch, C2, and data downlink," it also said. "Additionally, the PRC [People's Republic of China] continues to develop counterspace capabilities—including direct ascent, co-orbital, electronic warfare, and directed energy capabilities—that can contest or deny an adversary’s access to and operations in the space domain during a crisis or conflict."

These are very real threats that China, as well as Russia, among others, are developing, all, as noted with an eye toward neutralizing various space-based capabilities an opponent may have. Orbital space is a broad area where the United States has traditionally had a clear advantage and includes assets that support early-warning, intelligence collection, navigation and weapon guidance, communications, and more. U.S. forces have become highly dependent on these advantages. As such, potential adversaries see neutralizing them as a way to level the playingfield during a conflict while also throwing American forces off balance.

Wherever this new Chinese spacecraft landed and whatever it is meant to do, authorities in that country have been extremely tight-lipped about it. Hopefully, now that it is back on Earth, more information about it and its potential uses will begin trickling out.