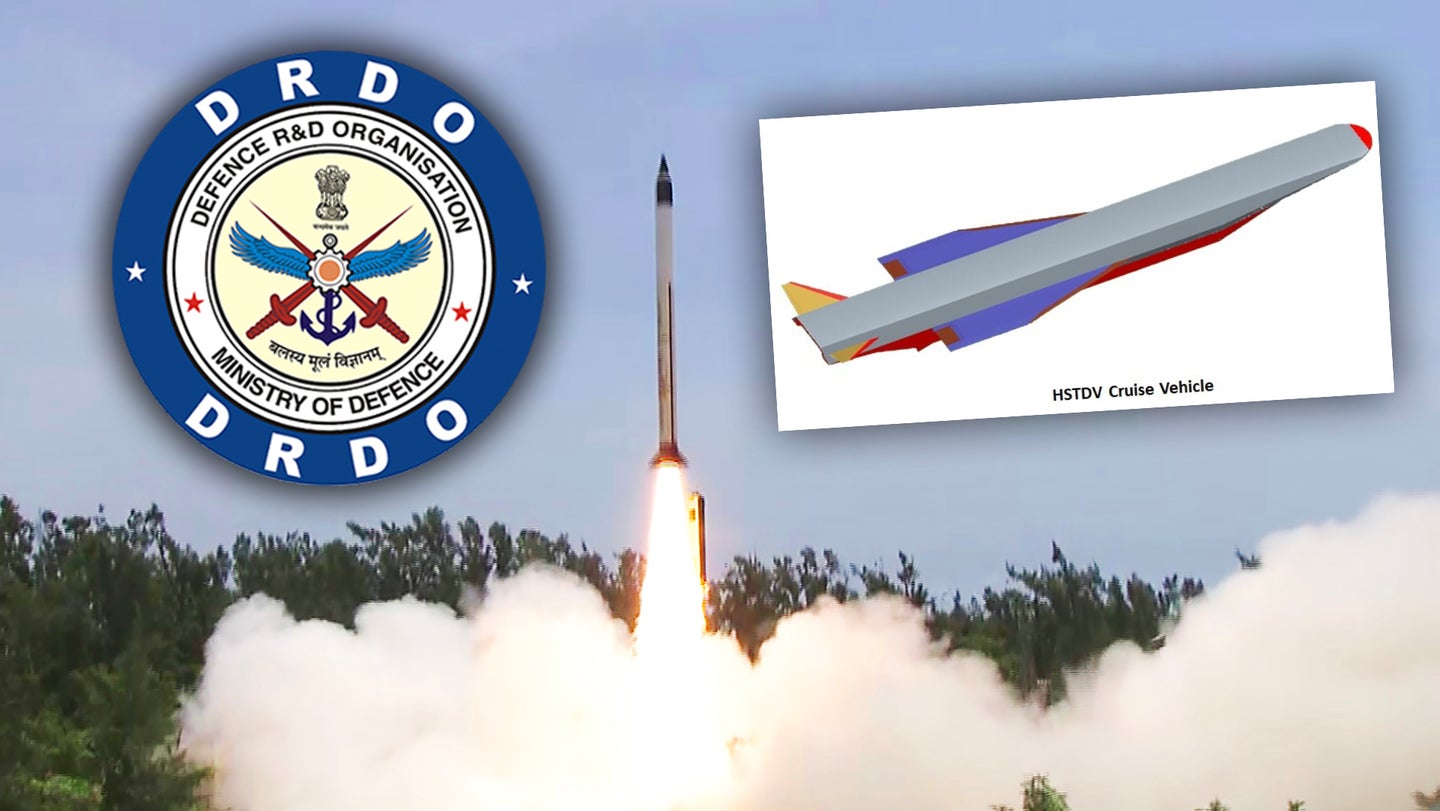 According to India, they have joined the hypersonic club with a successful first flight-test this morning of its indigenous Hypersonic Technology Demonstrator Vehicle. A product of the Defence Research and Development Organisation (DRDO), the vehicle supposedly utilizes air-breathing scramjet technology to propel it to hypersonic speeds. Eventually, it’s hoped that the technology demonstrator will inform the development of future hypersonic cruise missiles.

The hypersonic cruise vehicle was launched at 1103 hours on September 7, 2020, from the Dr APJ Abdul Kalam Launch Complex at Wheeler Island, off the coast of Odisha, in eastern India.

A scramjet typically only functions properly at high speeds, requiring some kind of booster, generally a rocket motor, to accelerate it to operating velocity. Then, the scramjet — an airbreathing jet in which the airflow is supersonic throughout the entire engine — kicks in. Hypersonic speeds are normally defined as Mach 5 or above.

The Hypersonic Technology Demonstrator Vehicle (HSTDV) was launched atop an Agni-I rocket — based on a short-range ballistic missile — which took it to an altitude of 18.6 miles and hypersonic velocity, according to a statement from the Defence Research and Development Organisation (DRDO). At this point, the aerodynamic heat shields fell away and the cruise vehicle separated from the launch vehicle. The air intake for the scramjet deployed and the vehicle continued to fly for more than 20 seconds at a speed of around Mach 6. The scramjet engine was powered by kerosene fuel.

“The critical events like fuel injection and auto ignition of scramjet demonstrated technological maturity,” the DRDO announced. “The scramjet engine performed in a textbook manner.”

The entire test was monitored by telemetry stations, electro-optical systems, and tracking radars — including a research vessel in the Bay of Bengal.

The latest demonstration proved a number of key technologies that will now inform further hypersonic developments, including the aerodynamic configuration of the cruise vehicle, separation mechanism, scramjet ignition, and sustained combustion in the hypersonic realm.

On Twitter, the DRDO celebrated the achievement, describing the test as “a giant leap in indigenous defense technologies.” The organization also noted that the mission “demonstrated capabilities for highly complex technology that will serve as the building block for NextGen Hypersonic vehicles.”

According to local media, the HSTDV will pave the way toward a practical weapon in the next five years. Other nations to have tested the technology required for a hypersonic cruise missile are the United States, China, and Russia.

A first test by the DRDO in June 2019 had been less successful. On that occasion, the Agni-I rocket reportedly failed to achieve the required altitude from Wheeler Island, apparently due to weight issues, although few details were provided.

There’s currently plenty of activity in the field of hypersonic missiles, as leading military nations seek a way of penetrating increasingly sophisticated enemy air defenses. Flying at tremendous speed and using an atmospheric flight profile, hypersonic weapons, in general, are a challenge to spot, track, and intercept.

Not all hypersonic missiles are powered, however, with some like the AGM-183A Air-launched Rapid Response Weapon, or ARRW, utilizing an unpowered boost-glide vehicle. A scramjet powerplant, on the other hand, offers the opportunity for sustained cruise and a more dynamic flight profile, making it potentially harder still to intercept and more flexible to employ.

In the United States, under the Hypersonic Air-breathing Weapon Concept program, or HAWC, Northrop Grumman has teamed up with Raytheon to work on a scramjet-powered hypersonic cruise missile, which is competing against a rival design from Lockheed Martin.

Yet another U.S. scramjet effort involves the Air Force’s Mayhem program. This seems geared toward examining the more advanced end of powered hypersonic development, with the aim of fielding an expendable air vehicle to test exotic turbine-based combined cycle engines. This type of powerplant combines a ramjet or scramjet with a conventional jet turbine, meaning it can operate at lower speeds too.

The Indian HSDTV, however, is probably closer in concept to the scramjet-powered X-43A hypersonic test vehicle developed for NASA, being a technology demonstrator rather than a prototype for a true weapon system. To date, the X-43A remains the fastest jet-powered air vehicle, achieving a speed of Mach 9.6 in a 2004 flight test. Unlike the HSDTV, the X-43A, together with its booster stage, was air-launched, from under the wing of a NASA NB-52 test aircraft.

In the United States, the X-43A was followed by Boeing’s experimental X-51A Waverider, another scramjet-powered design. The ‘waverider’ concept involves the vehicle ‘skipping’ on top of the shockwaves produced during high-speed flight to produce additional lift. This same concept is now being used in the Northrop Grumman/Raytheon design for HAWC.

While the X-43A and X-51A were carried aloft by a B-52 before being accelerated by a booster motor, previous U.S. hypersonic tests, like DARPA’s Project Falcon, have relied on rockets with a ballistic trajectory to get the test vehicle up to the required speed. It’s no surprise, therefore, that India took this approach with its HSDTV.

Alongside the HSTDV, India is also continuing to work with Russia on the scramjet-powered Brahmos-2 hypersonic cruise missile, with a preliminary agreement signed back in 2012 and involving both the DRDO and Russia’s NPO Mashinostroyenia. It’s unclear how the two programs are related, if at all, but plans call for the Brahmos-2 to be made available in versions launched from land, sea, and aircraft platforms. The Brahmos-2 may also leverage technology from the NPO Mashinostroyenia 3M22 Zircon hypersonic cruise missile, for which there are plans to arm a range of Russian Navy warships and submarines.

As it embarks on a new realm of hypersonic weapons development, India no doubt also has one eye on its regional rival China, which is already making rapid progress in this area.

With a hypersonic renaissance already well underway in the United States, and with similar programs known to be active in China and Russia too, India’s latest 'successful' hypersonic test couldn’t be more timely.