The Eurofighter Typhoon may be heading toward an undignified exit from Austrian service after the Central European country’s defense minister confirmed that she planned to begin talks to sell the jets to Indonesia.

A report in the Austrian newspaper Krone yesterday, September 6, 2020, stated that Defense Minister Klaudia Tanner of the Austrian People’s Party had officially confirmed Indonesia’s interest in buying the 15 Typhoons and that she plans to enter “concrete sales negotiations” with her counterpart in Jakarta, Prabowo Subianto. According to the same source, the Austrian General Staff is meanwhile looking at how the deal — which, as it stands, would leave the Austrian Air Force (Luftstreitkräfte) without any fighter jets — could be sealed.

Indonesian interest in the 15 jets was confirmed in July 2020, when a letter sent to Tanner by Subianto was published in the Austrian press, requesting talks over the Typhoon purchase, “to achieve my target of modernizing the Indonesian Air Force.”

That neutral Austria — which is not a NATO member — wants to offload its Typhoons is no secret. Vienna controversially selected the Typhoon over the Saab JAS 39C/D Gripen in 2002 and finished paying off the €2-billion purchase costs for the 15 single-seat jets in 2014.

The Swedish fighter had been judged more expensive than the Typhoon, but since then the defense ministry has called into question the jet’s operating costs and lack of certain critical capabilities — including the PIRATE infrared sensor, a helmet-mounted display, and the EuroDASS self-defense suite. At the same time, the Austrian jets have no beyond-visual-range air-to-air missile and lack any air-to-ground capability.

Back in July 2017 the then Austrian Defense Minister Hans Peter Doskozil outlined plans to phase out the Typhoons by 2023. At this time it was envisaged they would be replaced by 18 new fighters, which would also supersede the country’s veteran Saab 105 jet trainers, which also have a limited air policing role.

“It was necessary to stop the overflowing costs of the Eurofighter which does not have the full capabilities needed for our sovereign air surveillance,” said Doskozil, before declaring that “the Eurofighter in Austrian service is history!”

Doskozil argued that retiring the Eurofighter would be up to €2 billion cheaper than upgrading them, based on expenditure up to 2049. However, the October 2017 parliamentary elections in Austria saw Doskozil’s Social Democratic Party lose its majority to the Austrian People’s Party and, for the time being, the question over the Typhoon’s future was postponed.

The Austrian Typhoon deal has always been fraught with difficulties. The original 2003 contract was renegotiated in 2007, cutting the number of airframes from 18 to 15 and exchanging the more advanced Tranche 2 jets for the baseline Tranche 1 standard with its more limited capabilities. Furthermore, six of these jets would be supplied as second-hand airframes from the German Luftwaffe. The equipment fit was ultimately reduced to the most basic standard, since it was argued the Typhoons would only be needed for peacetime air policing over neutral airspace.

In the background of these latest machinations is the high-level lawsuit filed in February 2017 by the Austrian Defense Ministry against Airbus and Eurofighter Jagdflugzeug GmbH — the companies now responsible for fulfilling the Austrian Typhoon deal. The claim alleged “willful deception and fraud from 2002 up to 2007 in delivering the final product to Austria.” In particular, the ministry alleged that they had been misled about costs, industrial offsets, deliverability, and the jets’ equipment standard. The investigation was brought to a closeby a Viennese court in April 2020, and the accusations dismissed, but a wider criminal investigation of suspected bribery in the same deal continues.

Now, current Defense Minister Tanner has once again declared that giving up the Typhoon is the “declared goal” and that this reflects the ministry’s “responsibility to all taxpayers.” She also noted, however, that the proposed sale of the jets to Indonesia will be a “very complex and difficult” process.

The final decision on the sale requires not only a political consensus in Austria, but approval from the four Eurofighter partner nations — Germany, Italy, Spain, and the United Kingdom — as well as the United States. The latter is responsible for key items of equipment in the jet, including the Typhoon’s GPS. The fighters are judged to have around two-thirds of their service life remaining, equivalent to another 20 or so years.

Tanner explained two possible options to finalize the sale to the Krone. In the first scenario, the four parent nations would agree for Airbus to provide a new end-user certificate that would allow Austria to sell the aircraft direct to Jakarta (with U.S. approval). The second option would involve Airbus buying the jets back from Austria and then selling them on to Indonesia.

The transfer of the fighters to Southeast Asia could also face opposition from within Indonesia itself. Parliamentarians opposing the purchase have pointed to the country’s Law No. 16/2012, which prioritizes domestic defense companies for award of major weapons deals. Furthermore, Indonesian President Joko Widodo has spoken out against acquisition of “obsolete and outdated weapon systems,” suggesting that future fighter purchases would involve new-build jets. On the other hand, in 2011 Indonesia purchased 24 used F-16C/D Block 25 jets from the United States, selecting these over new-build Block 52 Vipers.

Before delivery, Indonesia’s latest batch of Block 25 Vipers was brought up to a Block 32+ standard, also known as Block 52ID, and local media suggests that a modernization package could be a possibility for the Typhoons, too. While the United Kingdom has chosen not to undertake a major upgrade of its Tranche 1 jets, Spain, for example, has taken a different approach, integrating Tranche 2/3 equipment on its Tranche 1 jets, including a computer symbol generator, digital video and voice recorder, and Rafael Litening laser designator pod. A similar procedure could be an option for Indonesia, perhaps with local industrial involvement from state-owned aircraft manufacturer PT Dirgantara Indonesia (PTDI) to satisfy Law No. 16/2012.

Jakarta’s interest in the Austrian Typhoon fleet could indicate that the country’s $1.1-billion plans to acquire 11 Russian-made Su-35 Flanker fighters — first announced in July 2017 — have run into serious trouble. According to unnamed sources in Indonesia, Washington pressured Jakarta into shelving the deal with Moscow, threatening sanctions in response. However, in March 2020 Dmitry Shugayev, director of Russia’s Federal Service for Military-Technical Cooperation insisted that the Su-35 deal was still on.

The Indonesian Air Force already operates previous versions of the Flanker in the form of five single-seat Su-27SKs and a pair of two-seat Su-30MKs delivered from 2003, along with nine two-seat Su-30MK2s received from 2008. These serve alongside the survivors of 12 F-16A/B Block 15OCU fighters delivered from 1989, plus the 24 upgraded F-16C/Ds, one of which was written off in an accident in 2015.

Beyond the Typhoon, Indonesia remains involved in the KF-X new-generation fighter as a minority partner alongside Korean Aerospace Industries (KAI), with a 20% share. The first prototype of the KF-X is now taking shape in South Korea and PT DI is expected to remain involved in its design and, subsequently, production. Indonesia could buy 48 of the KF-X fighters, but with series production not expected until sometime between 2026 and 2028, the ex-Austrian Typhoons could be a useful stopgap.

The Austrian Typhoons would, with a modest upgrade, provide Indonesia with a useful fleet of air defense fighters. The country occupies a very strategic position at the southern end of the South China Sea and the air policing mission is set to be an increasing issue in the future. However, the jet wouldn’t necessarily feature the kind of air-to-ground capability that might be required to counter the growing number of domestic terrorist groups, for example.

As for a potential delivery timeline, Austria’s current service contract for the Typhoon expires in spring 2022, which could be the point at which the jets are transferred to Indonesia. That, in turn, doesn’t leave Vienna with long to find a Typhoon replacement.

Should it manage to dispose of its unloved Typhoons, Austria will be left with the problem of how to adequately defend its airspace against high-end threats, especially since as a non-aligned nation it can’t rely on NATO support. An idea of these types of opponents was provided by Doskozil in 2017, when he admitted he didn’t feel confident if he had “to launch my pilots against a renegade Su-27 and its pursuers coming in from the east…”

At this point, the Gripen option might be back on the table, and Saab has previously said it could supply 18 new-build JAS 39C/D Gripens, rather than the more expensive JAS 39E/Fs. The F-16 Block 70/72 is another type that has been mentioned in the past by air force officials, and by selecting the U.S. fighter, Austria would follow the path taken by its neighbor Slovakia. If Austria wants to get its hands on a Typhoon replacement quickly, then second-hand, upgraded F-16s could be an option, or a leasing deal for used JAS 39C/Ds from the Swedish Air Force.

Then there’s the question of replacing Austria’s Saab 105 fleet, with the trainers due for retirement at the end of this year. Austria’s Green Party earlier this year called for the replacement of both the Saab and the Typhoon with the Leonardo M-346 Master, an advanced jet trainer that offers light combat capabilities. Austrian Typhoon pilots already train on the M-346 in Italy and in many ways it would seem to make an ideal replacement for the two-seat Saab. However, it lacks the raw performance and sophisticated avionics of a modern fighter jet, which would render it less suitable for the air policing role now undertaken by the Typhoon. Other potential candidates to replace the Saab 105 include the BAE Systems Hawk or Aero Vodochody L-39NG.

Whatever happens with the Indonesian deal, it’s clear that the Typhoon is unwanted in Austria. How exactly the country will dispose of these jets — and if that’s even possible — remains to be seen. 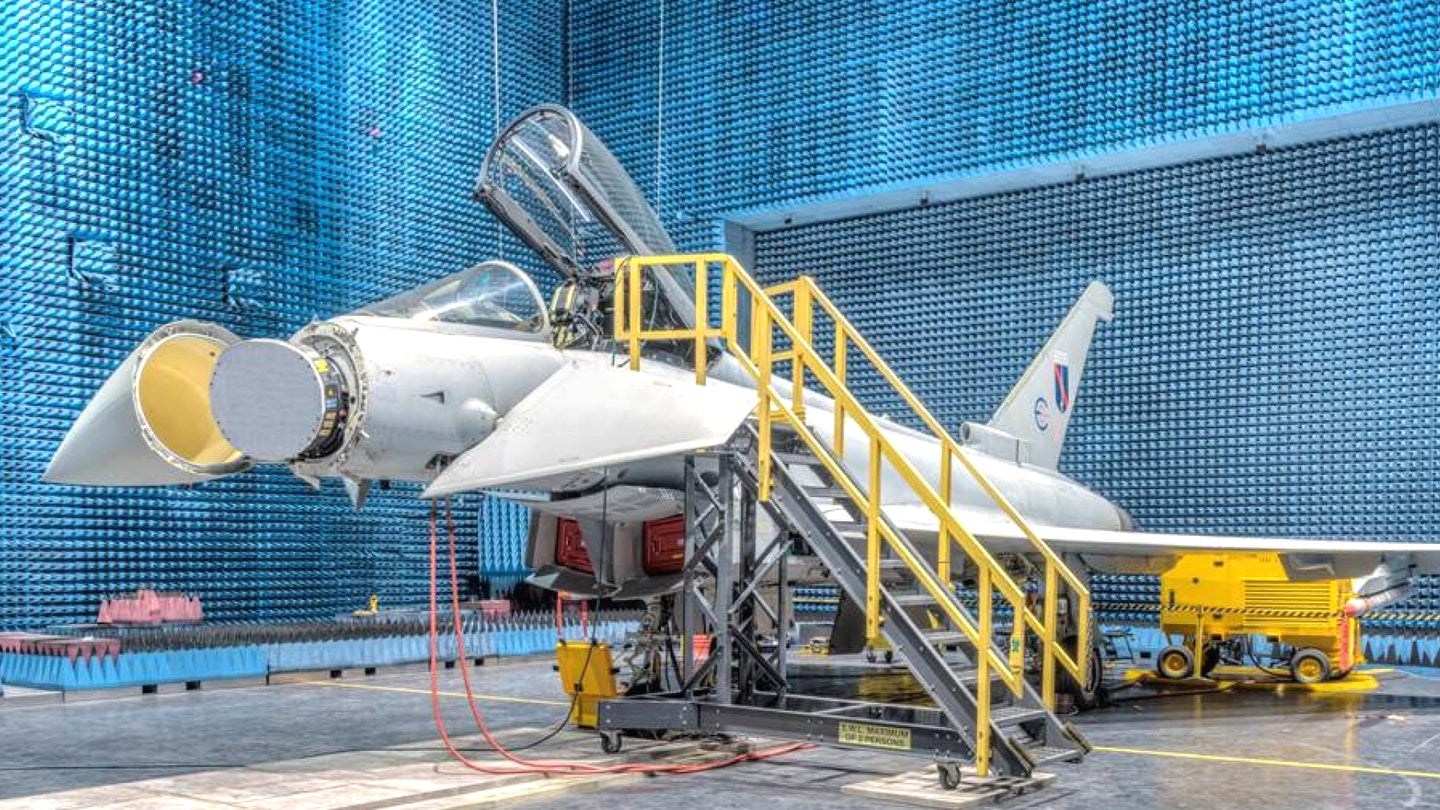 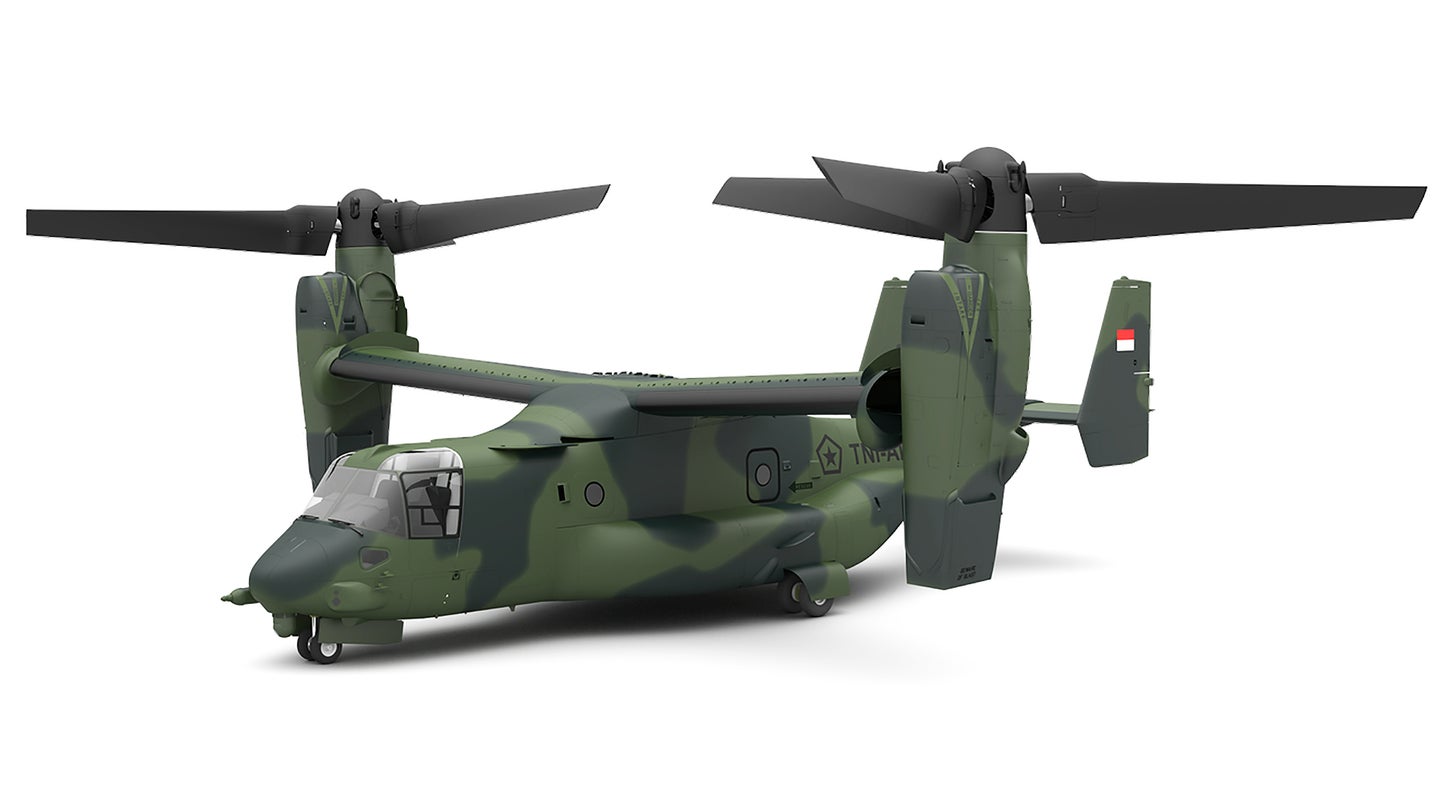 For a country with 17,000 islands and unique national security concerns spread across them, the Osprey isn’t cheap, but it will be a valuable tool. 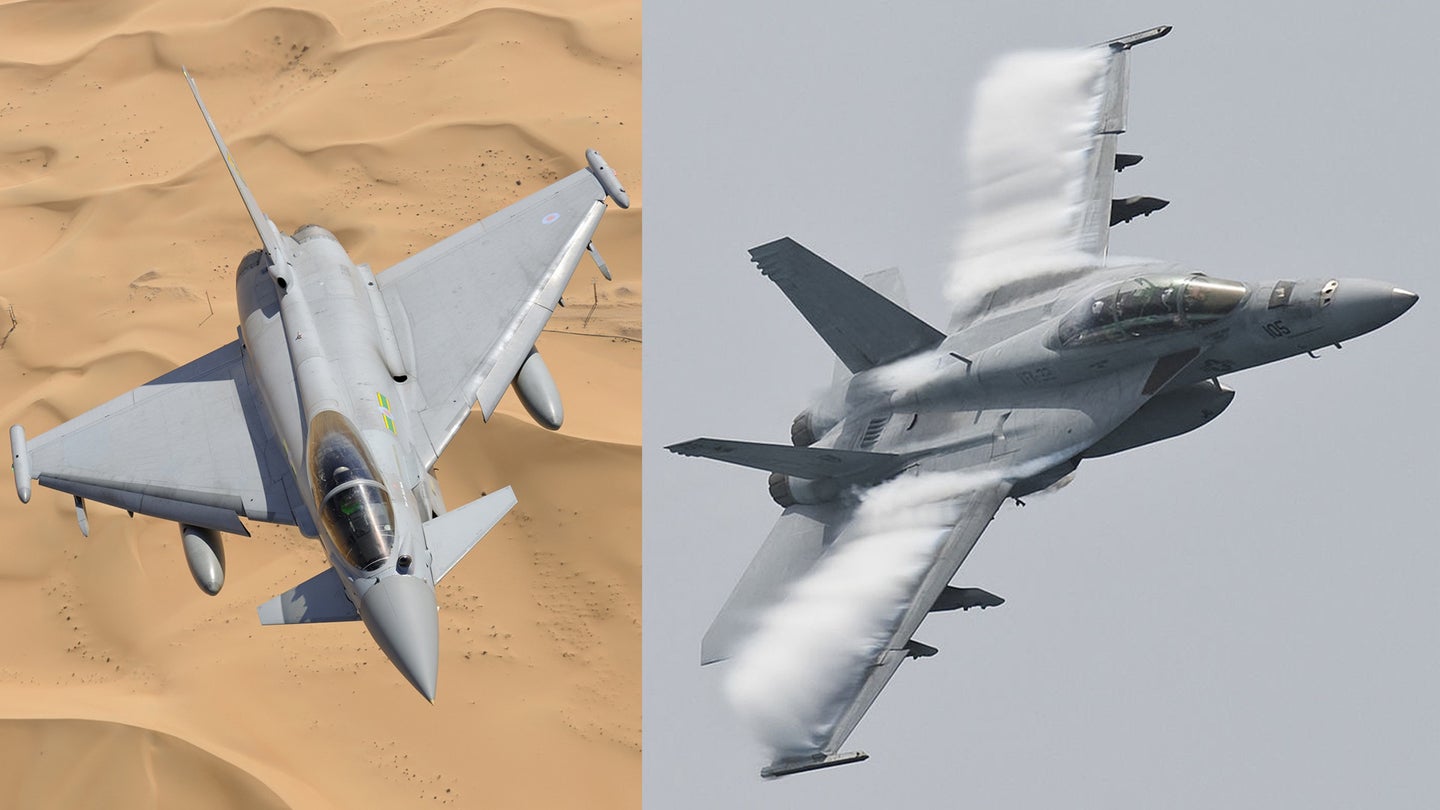