It is quite a bizarre spectacle, but the Army’s Night Stalkers do this sort of training in big cities all across the United States. 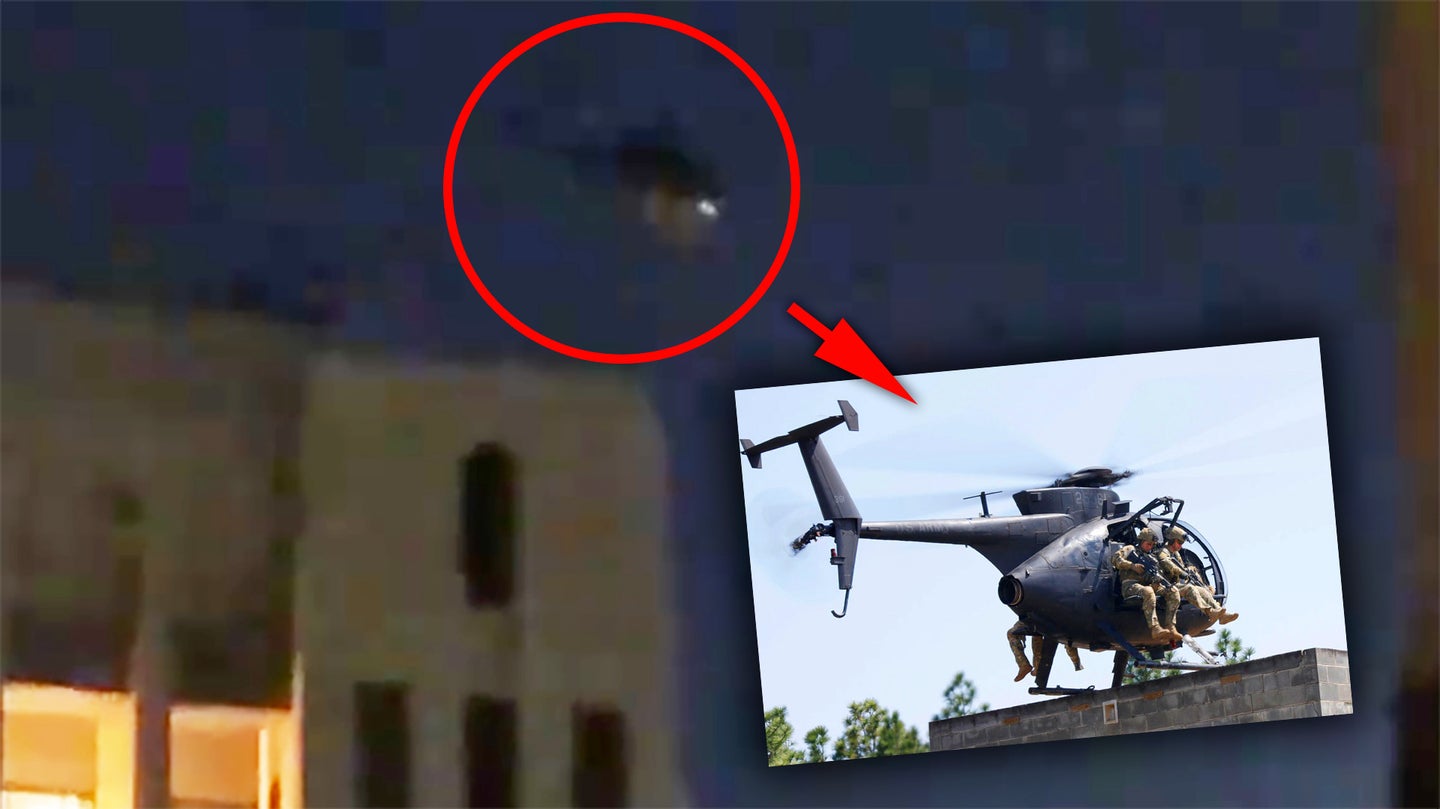 One of our readers reached out early this evening—September 1st, 2020—letting me know he saw a formation of four MH-6 Little Birds flying in tight formation over Interstate 5 near downtown Los Angeles. I joked at the time that it will be just a matter of hours until people start freaking out due to the urban training operations they were likely about to execute. Just like clockwork, a few hours after the sun had set, the social media posts began emerging. People couldn't understand what they were seeing, and how can you blame them? Watching blacked-out little helicopters, most of which usually run with no lights, ripping low over rooftops, landing on tall buildings and quickly departing, and even flying down city streets, is certainly concerning—any action movie will tell you that. But the reality is that it's only the world's best helicopter pilots that are tasked with the hardest missions practicing to fight future wars and to respond to terrorist incidents in what the Pentagon has dubbed 'megacities.'

There is no synthetic range that can provide a suitable training surrogate for such a demanding combat environment. So, the 160th Special Operations Aviation Regiment (SOAR), better known as the Night Stalkers, skip across the United States throughout the year to major cities getting this type of training in. They are often joined by Navy SEALs, Rangers, MARSOC, and Delta Force operators that they are traditionally tasked with carrying into battle. Sometimes they even work with federal law enforcement direct action teams, like the FBI's vaunted Hostage Rescue Team (HRT) and folks from the intelligence community. This type of military operations in urban terrain (MOUT) training is precisely what people are seeing over downtown Los Angeles tonight.

Check out the videos below:

It was just a year and a half ago that the 160th SOAR took their tricked-out MH-6 Little Birds and a couple of MH-60 Black Hawks to the City of Angels to give a performance the likes of which we had never seen. They descended in unison into parking lots, literally flew down city streets, and "assaulted" a government building in Long Beach resulting in this spectacular picture. It is customary for there to be little if any warning to the public that these drills are scheduled to begin, which always causes everything from great concern to outlandish conspiracy theories. The reality is that there is no mystery, it is all just part of the regular training America's most elite helicopter crews and the special operators they ferry around do, from New York to Miami to Denver to Portland.

In this first night of operations, the MH-6s can be seen whizzing around Downtown Los Angeles and landing and taking off from the top of the Metropolitan Transportation Authority (MTA) building. Usually, four MH-6s fly from place to place at night in tight formation, with just the lead helicopter with its lights on. The crews wear night-vision goggles and use their advanced electronics to navigate precisely as a division. This is really spectacular to see in person. It's only once you are beneath them you realize there are indeed four helicopters there, not one.. Once they arrive in an operating area, they seem to be a force many times their actual size, as they zip around a city for hours, dropping off and picking up on various rooftops and even skyrise ledges. The night bends the public's senses and perceptions, making the whole thing even eerier from the bystander's point of view.

Obviously, with everything going on in the country right now and a spotlight on law enforcement and surveillance, the Night Stalker Little Birds are likely to draw even more hysteria than usual from an uninformed public. We'll have to see how it all plays out.

We will keep you updated as to the Night Stalker's latest visit to Los Angeles as the exercise expands.