The service says that women aviators are deliberately not hydrating to avoid having to go, which creates all sorts of serious risks. 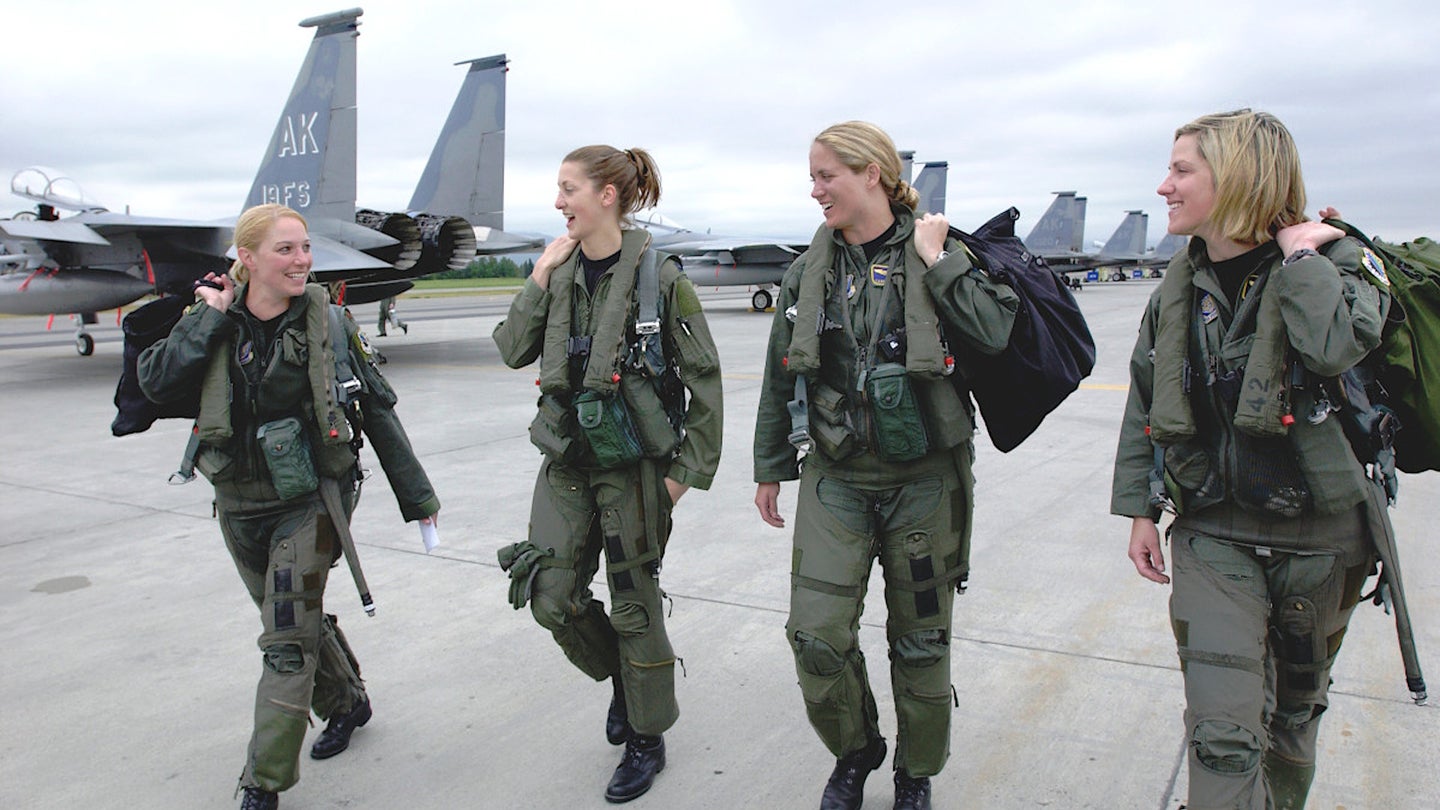 There are few truer sayings than "when you gotta go, you gotta go." When the time comes, though, finding a restroom can often be more difficult. Now imagine you're strapped into a tactical combat jet on an hours-long mission with limited options, most of them designed with men primarily in mind. That's the reality many female pilots in the U.S. Air Force face on a regular basis and one that the service is looking to change.

On Aug. 4, 2020, the Air Force began accepting proposals for what it has dubbed the Sky High Relief Challenge. AFWERX, a technology incubator the service established in 2017 to help foster innovation and accelerate the development and acquisition of novel technologies, is leading the effort, which is seeking systems to collect urine for disposal in flight that will be comfortable and easy to use for women on missions lasting up to 16 hours in total.

"The U.S. Air Force (USAF) needs an improved bladder relief system that allows female aviators to hydrate adequately and relieve themselves during flight without interfering with operations or compromising flight safety. Current mission profiles and air refueling ability up to 16 hours have led to longer flight times for aircrew who need to urinate multiple times during flight without removing restraint systems and flight equipment," a document detailing the challenge explains. "As a result, many female aircrew resort to 'tactical dehydration' to avoid the difficulties and potential dangers of having to relieve themselves inflight."

In short, the Air Force has found that female combat jet pilots are regularly not hydrating properly, and doing so deliberately, to avoid having to pee in flight. Needless to say, dehydration can be extremely dangerous, with symptoms that can include fatigue, dizziness, and confusion. These are problematic enough for someone trying to perform complicated or labor-intensive tasks on the ground, but they could have even more pronounced impacts on a pilot flying a particularly complex aircraft at hundreds of miles an hour, even if they're not in actual combat.

"During flights, dehydration negatively impacts pilots by lowering their G-tolerance by up to 50%," the Sky High Relief Challenge document further explains. "Dehydration can result in a variety of medical problems, including reduced physical and cognitive performance, decreased situational awareness, intense headaches, altered vision, and possible G-induced Loss of Consciousness (GLOC)."

The options that have been available for any pilot to get rid of their urine within the confines of a combat jet have generally been limited. Some single and two-seat aircraft do have built-in receptacles that collects it and pipes it out into the airstream. Another common option is a "piddle pak," which consists of what is effectively absorbent material of some kind stuffed into a plastic bag. Many types of larger aircraft do have more traditional airliner-type lavatories, but others still lack those facilities and require members of the aircrew beyond the pilots to rely on similar methods for getting rid of waste during long-duration flights, as well.

Without going into too much detail, it's perhaps not hard to understand how difficult it might be for women to use either of these options without any reliable means of first getting their pee out of their flight suit. Even for men, these options can dangerously draw their attention away from the primary task of flying. At least nine fatal crashes involving F-16 Viper fighter jets and one involving an A-10 Warthog ground attack jet have been blamed directly on male pilots fumbling with piddle paks.

The alternatives would be to hold it or simply let it go inside one's clothing. Both are uncomfortable, distracting, and could lead to potential health issues. "Physiological effects include the development of kidney stones, recurring skin irritations, long-term incontinence, and urinary tract infections," the AFWEX challenge notice says. "An improved bladder relief system will enhance the overall quality of life for female aviators on and off the job by leading to fewer physical and mental health issues."

AFWERX's challenge lays out four areas that proposals will need to address: a "comfortable, form-fitting female interface;" "improved flow performance / pump technology," "management and processing of bodily fluids," and "pump-less bladder relief system." The document outlining the challenge offers possible technological solutions in each category, as well as a number of known constraints, including ones that might not immediately come to mind.

For instance, of course, the first category demands that what the system is, in the end, be comfortable to wear for female pilots and be easy to put on and take off, as well as be leakproof, sanitary, and easy to maintain. But it also needs to reliably break free in the event of an ejection and be non-flammable and fire-resistant, so as not to become a hazard. The apparatus must be "minimally invasive" with "no in-dwelling / no catheters," and be able to work in any "airframe, cockpit, or ejection seat" configuration."

The pump technology section has many of the same safety and hygiene requirements. It also needs to have the "ability to adapt to pressure changes within the airframe," which can be significant.

The portion of the system that actually holds the urine, need to "handle volume, up to 3.9 liters, for a maximum of 16 hours" and be easy to dispose of at the end of a mission. AFWERX brings up the possibility of changing the actual state of the urine from a liquid to a gel-like solid or gas, or even possibly finding some way to recycle it, as possible technologies that could help in this area.

The final section on the complete pump-less bladder relief system reads very much like a summation of the other three more specific areas of interest.

The Sky High Relief Challenge actually isn't the first time the Air Force, or other U.S. military services have sought to address this particular issue. In 2002, the Air Force first hired Vermont-based Omni Medical Systems to develop what eventually became the Advanced Mission Extender Device, or AMXDmax, which is available male and female versions. The female version has a pad-like receptacle that fits under the flight suit. Both versions then feed urine to a disposal bag strapped to the leg.

The U.S. Army and Navy have since acquired these systems for their aviators, as have the U.K. Royal Air Force, Royal Netherlands Air Force, German Luftwaffe, and Belgian Air Component, according to Omni Medical Systems. It's not clear why AFWERX is necessarily running this challenge new, despite the AMXDmax already being available, but it could indicate that there has been feedback from female aviators regarding desired improvements.

It's also somewhat galling that the U.S. military as a whole hasn't solved this issue for female aviators broadly. When it comes to women flying combat jets, they've been doing that for decades now and it wasn't until 2002 that the Air Force even began looking to address this problem. The Navy didn't move to acquire the AMXDmax system until 2008 and the issue of female-specific needs reportedly didn't even come up until Vice Admiral DeWolfe Miller, the service's top aviator and a man, raised the issue at a Female Aviator Career Training Symposium in 2018.

Unfortunately, it's not the only instance of similar issues regarding women in uniform going unaddressed even as they have continued to serve in ever greater numbers over the years. The Army is the process of testing female-specific body armor now, five years after it ended its prohibitions on women serving in combat units. Female soldiers, of course, had a very real need for protection designed for their bodies well before then, as well.

AFWERX makes it clear that an improved system to help women pilots pee in flight isn't just about comfort, combat effectiveness, or even safety. "Increased availability of female aircrew" and "improved retention of female aviators," the latter being a particularly important issue in light of persistent pilot shortages, are also listed as benefits of meeting the goals of the Sky High Relief Challenge.

An evaluation team is set to begin looking over submissions on Sept. 21, 2020, and have picked a number of entrants to present their proposals at a showcase event by Oct. 13. The showcase itself, which will be online due to the COVID-19 pandemic, will take place between Nov. 4 and 6, after which a winner, or possibly multiple winners, will get to submit a formal plan for turning their idea into an actual prototype.

Hopefully, the winners and their concepts will be made public to help give some additional insight into how the Air Force may be looking to address this clearly long-standing and obvious issue in new and novel ways so current and future female pilots can keep "flying sky high."