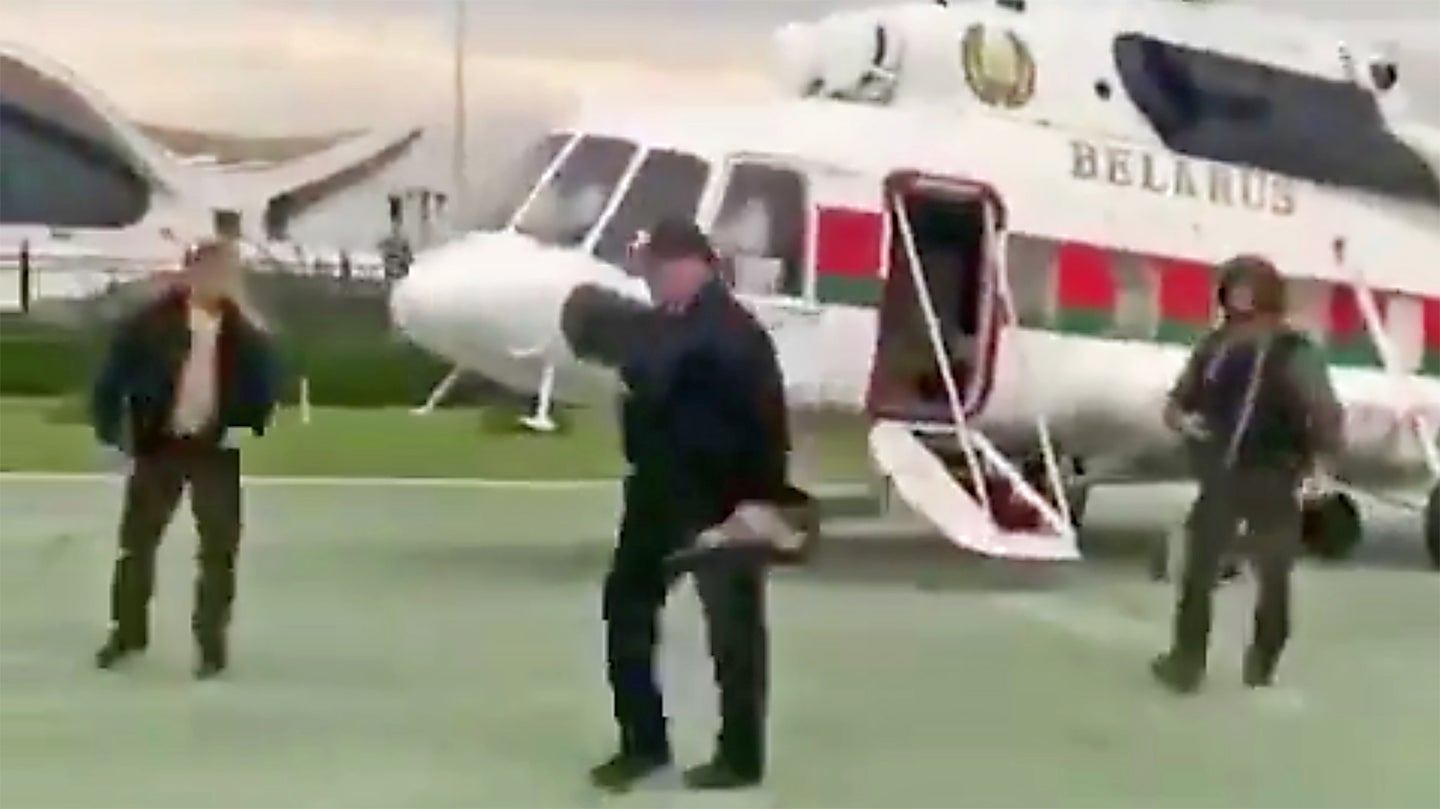 The embattled authoritarian president of Belarus, Alexander Lukashenko, often referred to as Europe's last dictator, has had better days. Gigantic crowds of protestors continue to demand that he relinquish the power he has held for over two and a half decades. Belarus is situated between NATO alliance states and the Russian border in Eastern Europe. This certainly ups the potential for international influence on the uncertain future of the country, which is technically part of a "Union State" with Russia, but has seen strained relations with Moscow on and off over the years.

While weeks of protests and crackdowns have destabilized Lukashenko's power, today he made a classical dictatorial show of force by flying to his palace aboard his executive configured Mi-8MTV-1 Hip helicopter, replete with video of him giving phony orders/commentary about the security situation on the ground below. He disembarking the chopper with an AKS-74U compact assault rifle in hand and wearing a full tactical chest rig while surrounded by commandos—there was no magazine in his gun. He then visited some of his troops manning a blockade near his palace, with plenty of applause to go with his arrival there. The footage almost seemed comical in nature, but it is anything but to those in Minsk that are demanding his ouster.

This was a classical 'I am not going anywhere' propaganda move by Lukashenko that is meant to appeal to the parts of his security apparatus that still supports him and to those who dare to challenge him. We have seen it all too many times before around the globe when dictatorial rulers' grip on power begins to slip.

His presidential helicopter is especially interesting. It looks very similar in terms of its interior design to Vladimir Putin's customized VVIP Mi-8s. There appears to be at least two of these helicopters in the presidential airlift fleet. They are equipped with special communications, defensive countermeasures, special air conditioning, and auxiliary power, among other alternations beyond their luxurious cabins. Also like Russia, it appears that Belarus has received VVIP configured AW139 as of late.

Apparently Lukashenko's 15-year-old son, Nikolai, is also acting as his bodyguard, which is interesting and yet another sign that the circle of trust continues to shrink around him.

Despite a direct threat from the country's Ministry of Defense that troops rather than riot police could be used to disperse unauthorized public gatherings, a crowd of over 200,000 – a significant number for a country with a total population of fewer than 10 million – marched in Minsk on Sunday, approaching the Independence Palace, which serves as Lukashenko's working residence. Security around the palace has become highly militarized in recent weeks.

Anti-Lukashenko protests, largely in response to the regime's arrest of political opponents and its poor handling of the COVID-19 pandemic, have been occurring since late May. However, the results of the August 9th election, in which the long-ruling leader was stated to have acquired 80 percent of the vote, was declared a farce by many Belarusians who had become fed up with the government's corruption and Lukashenko's quasi dictatorial reign. This triggered new protests that only seem to be growing larger as the days go by, even after substantial, violent crackdowns by the Belarusian security apparatus.

There are already worrying signs that Russia could deploy either its Syria or Ukraine playbook, or perhaps a hybrid of the two, on the situation in Belarus. The Syria model seems more likely at this point as Lukashenko has already stated that Russia has agreed to help ensure the security of the country, something the Kremlin could potentially do either through the Union State agreement or via the collective security provisions of the Collective Security Treaty Organization (CTSO), of which both Russia and Belarus are members.

Regardless, assistance from the Kremlin never comes without a cost. Russia getting long-term leases on bases along NATO's backdoor in Belarus would be one potential concession among many others, especially given Moscow's multiple failed attempts to secure approval from Lukashenko's government to establish a permanent air base in the country over the years. Of course, that is assuming Lukashenko holds onto power in the near term. If he doesn't, some fear that Russia could invade the country or at least back an insurrection with the aim of having its proxy forces control at least large parts of it in the future.

There is no telling exactly where all this will lead, but for now, President Lukashenko wants everyone to know that he is in control and is ready to fight to the death to keep it that way.