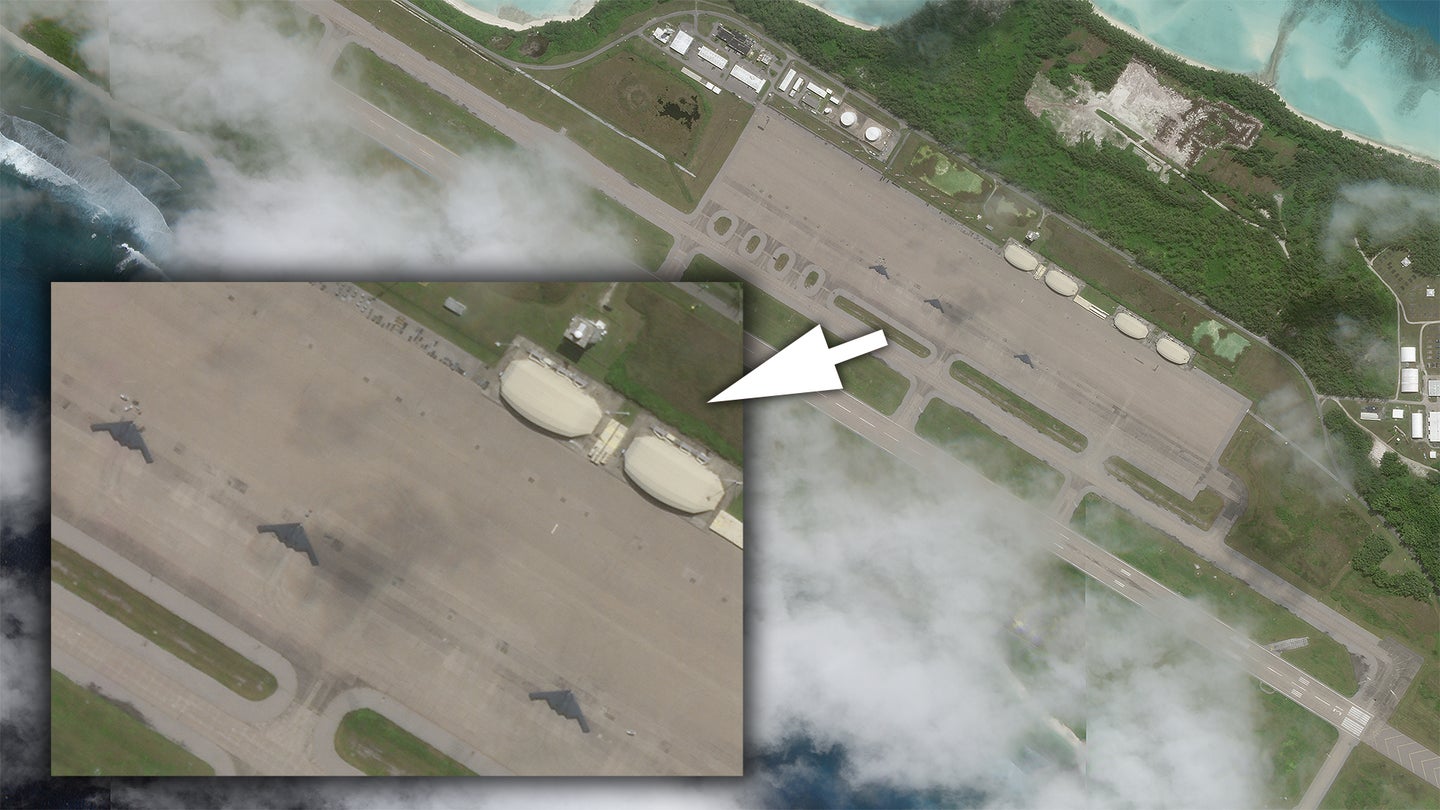 On August 11th, 2020, U.S. Air Force sent a trio of B-2 Spirit stealth bombers halfway around the world from their home at Whiteman AFB in Missouri to the remote island outpost of Diego Garcia located deep in the Indian Ocean. The unannounced deployment is part of the Air Force's new unpredictable bomber deployment strategy and comes at a time where tensions in Asia vis-à-vis China have peaked.

The remote airfield, which was a bustling hive of activity during the first decade of the Global War On Terror, is a far quieter place today. Still, it has seen a small resurgence in heavy bomber use as of late, with B-52s being sent there as a backstop against potential Iranian aggression last Winter. Now Diego Garcia''s huge parking apron has received three of its most prized, but temperamental patrons, ones which have their own special "VIP" climate-controlled clamshell shelters along the edge ramp that sit ready and waiting should the bombers have to use them in a crisis, or in this case, a deployment.

Images The War Zone obtained from Planet Labs, August 18th, 2020, shows the three bat-winged bombers sitting on the apron at Diego Garcia. The only other aircraft seen at the sprawling airfield is a Gulfstream C-37/GV on the transient ramp to the northwest of the primary dispersal. The ships visible in the photo are part of the Maritime Prepositioning Force squadron that is loaded with gear and supplies and ready to set sail should a crisis come to pass.

The image shows some action around one of the bombers, but it is notable that none of them are seen using their B-2 Shelter System (B2SS) enclosures at the time the photo was taken.

Since the bombers arrived at Diego Garcia after flying direct with numerous aerial refuelings, a trip that took over an entire day, they have flown a handful of sorties.

On August 18, 2020, two of the three B-2s at Diego Garcia flew out into the Indian Ocean and “conducted joint interoperability tactics training,” according to Pacific Air Forces (PACAF). Typically, “joint” activities refer to those where other U.S. military services also take part, while training focused on “interoperability” often involves foreign allies and partners. The Air Force did not say whether any other forces, American or otherwise, joined the bombers for this flight.

PACAF did say that the B-2 training mission was conducted simultaneously with a separate long-range training flight involving a pair of B-1 bombers that flew all the way from Dyess Air Force Base to Japan and back. Those bombers never actually touched down in that country, but were joined on the return trip by two more B-1s heading back to Ellsworth Air Force Base in South Dakota after a short duration deployment to Andersen Air Force Base on Guam.

When the trio B-2 bombers arrived at Diego Garcia on August 11, 2020, it marked the first time a Bomber Task Force mission had led to B-2s actually deploying anywhere in the broad Indo-Pacific region since January 2019, when another trio of these aircraft touched down at Hickam Air Force Base in Hawaii. This latest B-2 deployment comes amid a significant increase in U.S. military activity across the Pacific in response to similar moves by Chinese forces and is clearly a part of a larger effort to send a message to Beijing, as well as assure American allies and partners in the region.

“We are excited to return to this important location. [Diego Garcia] puts the ‘INDO’ in INDOPACOM [U.S. Indo-Pacific Command],” Air Force Lieutenant Colonel Christopher Conant, the Bomber Task Force commander, said after his flight arrived on the Indian Ocean island. “This Bomber Task Force is our National Defense Strategy in action. We are sharpening our lethality while strengthening relationships with key allies, partners, and our sister-service teammates. Despite a global pandemic, the Airmen of Whiteman Air Force Base and Air Force Global Strike Command stand ready to support INDOPACOM and the Department of Defense in achieving our Nation’s strategic objectives.”

In addition to their latest Indian Ocean sorties, a lone B-2 from the task force at Diego Garcia had flown to northern Australia and back on August 14. This flight appeared to take the bomber to the Delamere Air Weapons Range, but it is unclear if it dropped any weapons, live or inert.

With no disclosed timeline for their deployment, the B-2s could be working out of Diego Garcia for the foreseeable future and considering their global reach and increasingly expeditionary nature, they could show up just about anywhere in the Indo-Pacific in the days to come. Above all else, the use of Diego Garcia by the B-2s is a reminder of just how strategically located and important the installation is to the United States.