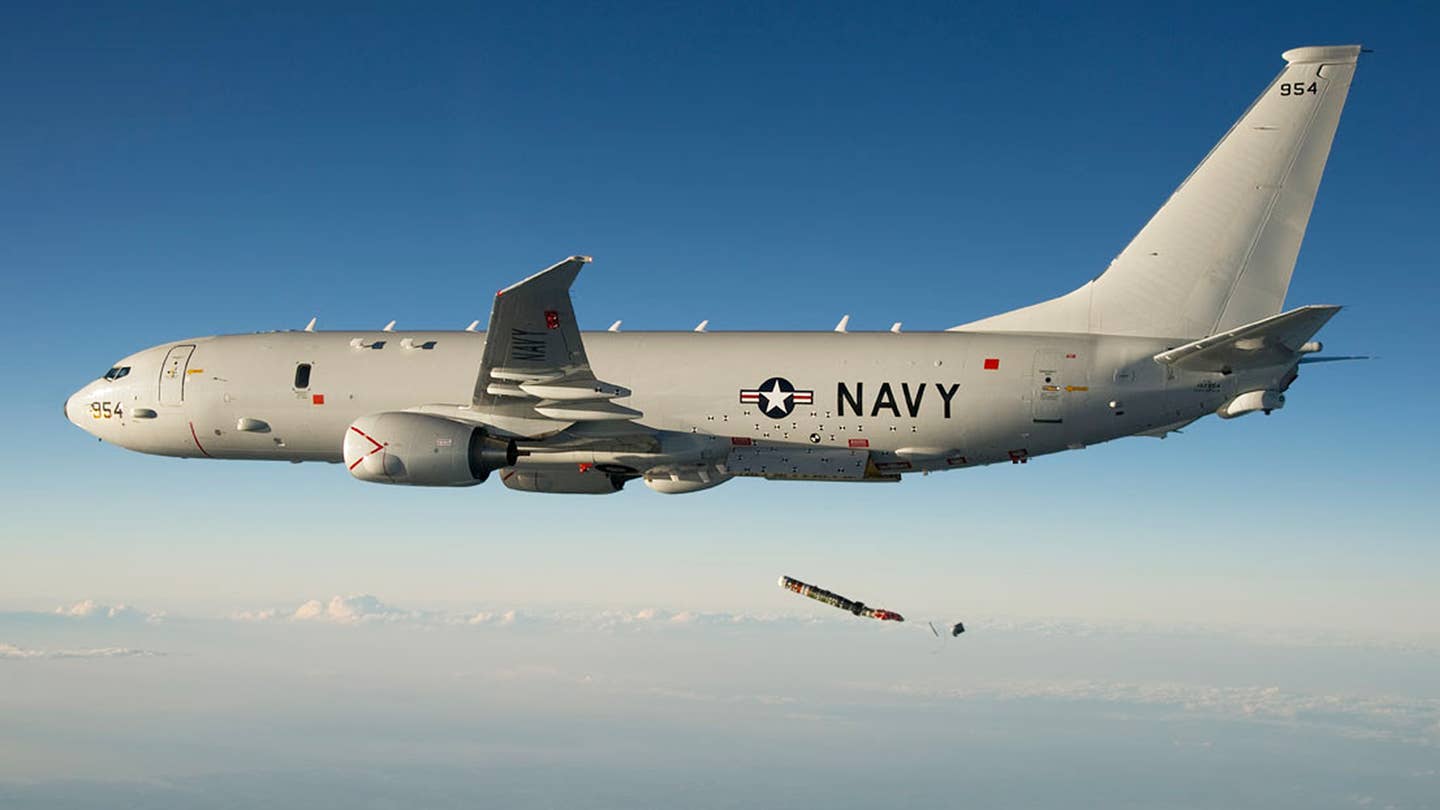 Adding range and smart guidance to existing munitions, via a kit, is the backbone of America’s “smart weapon” revolution. Laser guided bombs, GPS guided JDAMs, and Wind Corrected Munitions Dispensers are all bolt-on kits that drastically increase the capability of existing air-dropped weapons.

Now, the Mark 54 light-weight torpedo is getting this same treatment via the High Altitude Anti-Submarine Warfare Weapon Capability (HAAWC for short).

The HAAWC concept is relatively straightforward. The folding-wing kit contains a flight control computer and GPS, and attaches via a set of collars to a Mark 54 torpedo. Once launched, HAAWC's wings spring out and it heads for its target many miles away. When it arrives at its assigned target area, the wing kit jettisons the torpedo, with a parachute gently lowering it into the water. Once in the water, the Mark 54 torpedo then activates to autonomously hunt for and kill a submarine—just as it would if it were dropped close to the target directly by a launch aircraft or ship.

Without the HAAWC kit, a Mark 54 Torpedo has to be dropped from an aircraft at low altitude, usually no higher than 100 feet. As such, the concept represents a massive increase in flexibility when it comes to engagement tactics and capabilities for aerial anti-submarine warfare platforms, and especially for the Navy’s all-star export success and flying Swiss Army knife, the P-8 Poseidon.

It's likely that HAAWC will also be outfitted with a data-link, so that mid-course targeting updates and even retargeting can be provided while the weapon makes its way to the target area. During a dynamic engagement, where multiple platforms are detecting multiple sub-surface contacts in the same region as a HAAWC-armed P-8, it will be highly beneficial to be able to direct these weapons after letting them loose. Not only will updated targeting coordinates increase their probability of killing a submarine, but it will allow weapon system officers aboard the P-8 to make the best out of a limited number of available weapons by targeting the highest-priority targets first—even if the priority list changes after the weapon's release.

HAAWC, and the standoff attack range that it provides, also allows the P-8 and other ASW aircraft to go after subsurface targets without exposing themselves to potential anti-air defenses that may overlap with the position of the submarine, or submarine operating area, being targeted.

This kit also makes it so a P-8 does not need to take the time to descend low over the ocean, from a perch that can be as high as 30,000 feet, to make an attack. When the multirole P-8 descends for a traditional attack run, other missions, such as radar or signals intelligence, have to be aborted temporarily or are significantly degraded. Adding the new kit also means that the P-8 won’t have to expose itself low and slow, a vulnerable place to be for any combat aircraft.

This HAAWC kit will also allow the P-8 to work as a kind of arsenal ship for other anti-submarine platforms—like ships, helicopters, and even friendly submarines—by punching off torpedoes at long ranges on demand, without even having detected the target itself. Instead, the P-8 can use "third-party" targeting info from these sources to direct the winged torpedoes on their way.

The system could also lead to the ability to launch disposable, sub-hunting underwater drones from relatively long ranges, or even a sonobuoy dispenser that will allow P-8s to rapidly detect and track submarines over a wide area while still remaining at high altitude, and in a centralized location.

The HAAWC concept is actually not all that unique. Extended-range winged smart weapon kits are emerging as an increasingly relevant capability. The JDAM-ER and WCMD-ER give an alternative to the more expensive, purpose-built, winged glide weapons like the AGM-154 Joint Stand-Off Weapon (JSOW) and GBU-39 Small Diameter Bomb.

Considering that America's potential enemies are increasingly putting in place anti-access/area-denial strategies, the ability to stand off at range in order to attack land and sea targets is more relevant than ever. The prosecution of subsurface targets is no different, although it has received less attention in recent decades than have weapons focused on striking ground targets. That's all changing, and HAAWC is a perfect example of that fact.

Another potential application for the HAAWC is to combine it with the Anti-Submarine Rocket (ASROC) system that's already designed to attach to the Mark 54 torpedo. This would give surface combatants, including US cruisers and destroyers already equipped with the Mk 41 Vertical Launch System (VLS), dozens of extra miles of engagement range against hostile submarines as compared to the existing wingless, rocket-assisted-only ASROC system.

Such an application would mean that extra distance between the launch ship and the targeted enemy submarine being could be realized, and the ability to attack subsurface targets while remaining outside the range of the enemy's core anti-ship defenses would become a more realistic possibility.

The HAAWC system could also be adapted for use by shore-based launchers and could provide a flexible and comparatively affordable coastal defense against prowling submarines. Bringing air-launched weapons into the surface-to-surface arena is an increasingly popular concept; most notably, the Small Diameter Bomb is being adapted by Boeing and SAAB to be launched from the ground to hit time-sensitive targets and provide emergency close-air support over ranges approaching 100 miles. By adapting HAAWC in a similar way, countries could put enemy submarines at risk along their entire coastline without having to field throngs of aircraft or patrol craft capable of employing torpedoes or depth charges.

With the subsurface threat expanding rapidly around the globe, any sort of force-multiplier like HAAWC is a welcome, if not absolutely necessary, development. The P-8 already has a bristling quiver of capabilities that includes sea control, electronic intelligence gathering, over-water and over-land advanced radar surveillance, mining, networking and data fusion, surface strikes, and of course, anti-submarine warfare, among others. Yet the potential addition of HAAWC to its weapons menu will drastically elevate the jet’s sub-killing capability in a much needed way.

No matter how capable an aircraft is, it can only be in one place, and affect the battlfield around that one place, at any given time. HAAWC dramatically expands the P-8s lethal reach from that "one place," and it could lead to a whole new approach when it comes to getting more sub-sea kinetic-kill coverage out of fewer anti-submarine warfare platforms.