AC-130W pilots get a huge boost in situational awareness and more from the helmet mounted display that is usually found on fighters. 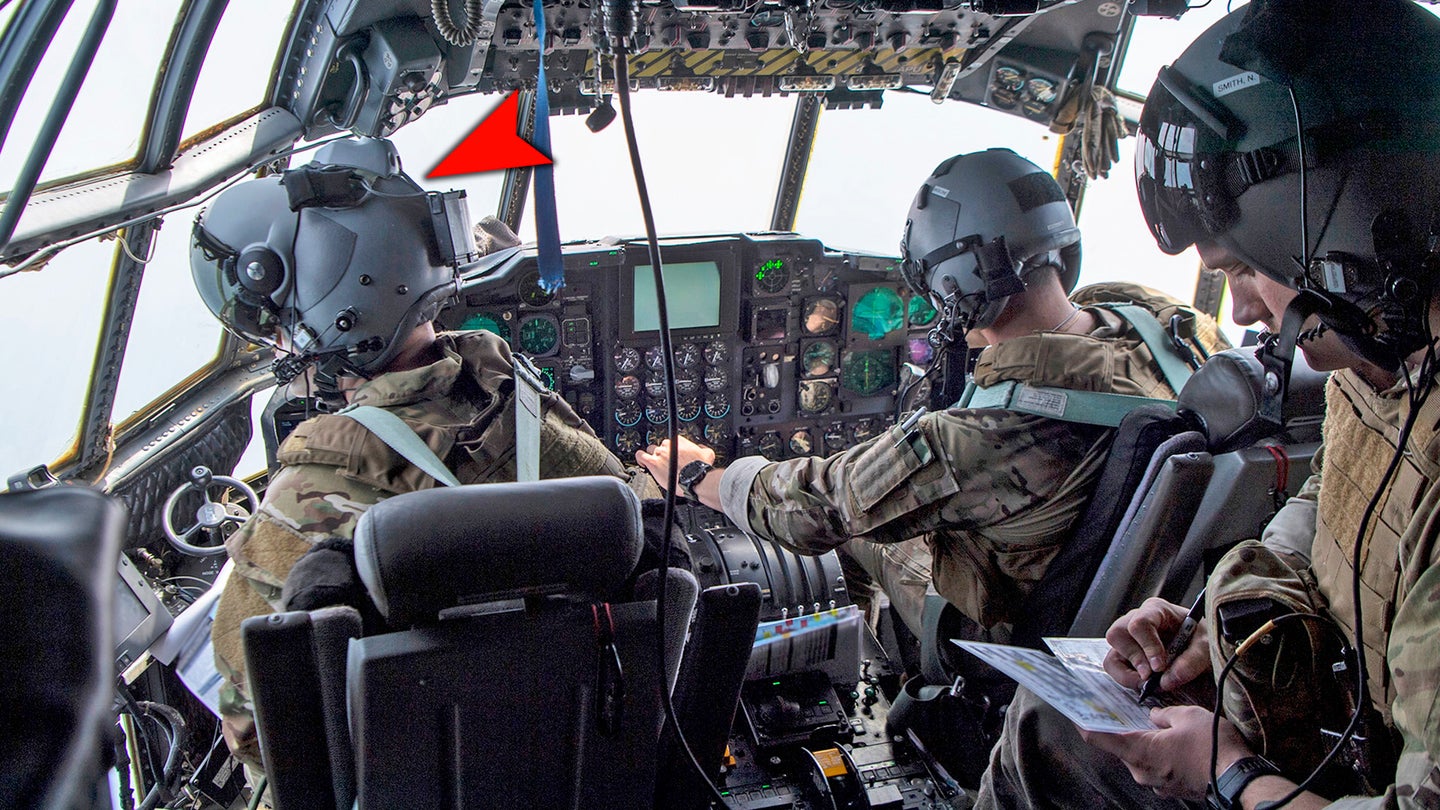 It's known that pilots that fly the AC-130W Stinger II gunship wear the Scorpion Helmet Mounted Display, but we haven't seen much imagery showing it in use. Now, thanks to photos released from exercise Gulf Sentry, which was held last week in the Persian Gulf off the coast of the United Arab Emirates, we have a great shot of a pilot of the gunship not just wearing Scorpion, but the improved variant of the helmet-mounted display, known as HObIT, or Hybrid Optical-based Inertial Tracker. HObIT more accurately tracks pilot head movements compared to the original version of the Scorpion.

The HObIT system is an upgrade for the Thales Visionix Scorpion helmet and it features a new monocle with updated symbology. The helmet also employs a new Inertial Measurement Unit (IMU) optical head tracker that works in tandem with a group of small circular stickers that are placed on the interior of the cockpit to seamlessly track the pilot’s head movements even if the helmet moves out of the optical tracking zone.

The Thales helmet has already been incorporated into a number of aircraft types for both air-to-air and air-to-ground applications, with the AC-130W fielding the system after the A-10C Thunderbolt II. It now has an increasing number of applications including the upgraded F-5ATs of contract aggressor company Tactical Air Support Inc., which you can read all about here. The War Zone also recently reported how the Scorpion helmet was tested by pilots flying the U.S. Air Force F-22 Raptor.

Air Force Special Operations Command’s (AFSOC) AC-130Ws are converted C-130H transports, and their crews continue to use holographic rifle sights to provide a relatively simple way of lining up the gunship in a pylon turn against targets on the ground. You can read more about this arrangement of an off the shelf system for this unique application in this previous War Zone article. The addition of the Scorpion helmet will provide Stinger II pilots with an enhanced ability to more accurately target weapons and improve a pilot’s situational awareness. It displays full-color symbology in front of the pilot's eye and is linked in with the aircraft's sensors and data-links so that targets and other objects of interest, as well as primary flight data, are displayed in an augmented reality fashion all around the pilot.  It’s a major advance for the USAF’s gunships, with Air Force Special Operations Command’s new AC-130J Ghostrider set to field the same system.

Older AC-130s, such as the now-retired AC-130H and U models, had a sideways-looking Head-Up Display (HUD) for the pilot in order to help train the aircraft’s guns on a specific target area. This was in addition and/or in cooperation with the aircraft's advanced sensors and computer systems. It was a case of having to fly the aircraft in a manner to enable the weapons to be employed — much like a 17th-century warship with a Broadside that featured a battery of cannons. As well as the aerial gunners in the cargo bay, the crew members in the cockpit could also fire some of those weapons themselves, if necessary.

The AC-130W is armed with the GAU-23/A 30mm Bushmaster II cannon and a devastating 105mm Howitzer, but it can also call upon an array of smart weaponry to rain down all manner of lethal effects. This includes AGM-176 Griffin air-to-ground missiles and GBU-44 Viper Strike munitions that can be deployed via its rear ramp. The AC-130W can also fire AGM-114 Hellfire missiles and drop GBU-39/B Small Diameter Bombs. You can read more about the AC-130W’s range of armaments here.

Exercise Gulf Sentry was held between the United States and the United Arab Emirates Joint Aviation Command (JAC) from Aug. 9-12 exercised the mission of Air Operations in support of Maritime Surface Warfare (AOMSW) in the Arabian Gulf. An AC-130W assigned to U.S. Special Operations Central Command (SOCCENT) worked alongside Joint Terminal Attack Controllers (JTACs) who were responsible for directing live fires at simulated targets. A media release said: “It gave Emirati and U.S. pilots a chance to hone strike capabilities together against surface targets such as maritime infrastructure and fast attack craft.”

For the AC-130 crew, this exercise appears to have provided an excellent opportunity to exercise the AC-130W’s firepower in a maritime environment, and it wasn't the first time it did so in recent months. The need to strike large numbers of small craft in the Arabian and Persian Gulfs is a burgeoning requirement for U.S. Central Command. This kind of air-sea training reflects the need to rehearse a vital Persian Gulf mission, underscored by the ongoing tensions with Iran in the Strait of Hormuz.

Equipped with a wide range of new tech weaponry, that can now be more quickly and effectively employed by the AC-130W crew, means the gunship continues to prove its worth. Blending the Scorpion helmet-mounted display with that impressive airborne arsenal makes the AC-130 an even deadlier attack platform that can unleash its killer blows faster and more accurately than ever before.