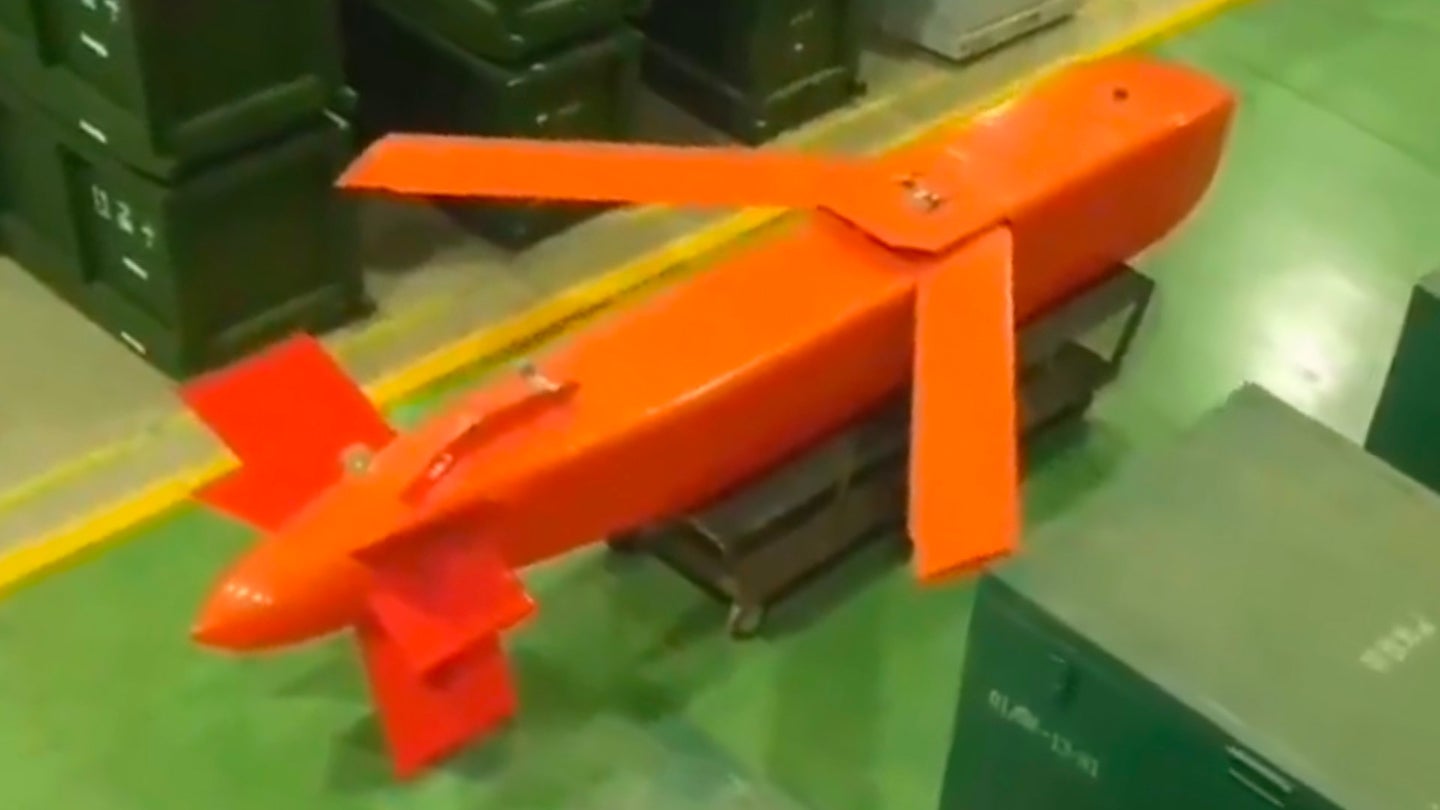 China has unveiled a new “smart” glide dispenser weapon that closely resembles the Raytheon AGM-154 Joint Stand-Off Weapon (JSOW). In a video posted by state-run China Central Television, or CCTV, this weekend, an orange-painted example of the weapon was shown, loaded on a trolley in what was reportedly a People’s Liberation Army Air Force storage facility.

A report on the Shanghai-based news website Eastday stated that CCTV’s National Defense Science and Industry program had disclosed details of the domestically-made 1,100lb (500kg)-class air-launched weapon for the first time. CCTV’s reporter provided a guided tour of the glide weapon, including manually extending and retracting its small wings. The weapon shares obvious common design features with the JSOW including an almost identical tail configuration with six small fins. The front end of the Chinese weapon appears less sophisticated in design than its U.S. counterpart, which also includes a sleeker nose profile that was designed for low-observability (stealth). You can read all about the JSOW in this past article of ours, as well as how it is gaining a powered cruise missile capability here.

added more detail, saying the weapon — for which a formal designation remains unknown — “can release hundreds of submunitions,” which it said “can effectively paralyze an airfield in one shot.” A senior engineer at the China North Industries Group Corporation (NORINCO), which is stated as the weapon’s manufacturer, is quoted as saying that each glide-bomb can carry 240 sub-munitions of six types. These likely include armor-penetrating submunitions and mines that can be dispersed across a large area, such as an airfield or a critical choke point.

“According to reports, this advanced aerial bomb has a range of more than 60 km [37 miles],” the report stated. “It not only has high strike accuracy, but can also be loaded with a variety of ammunition,” it added, describing a dispersal area for the sub-munitions as being “more than 6,000 square meters.” It also attributed the weapon with the ability to perform “high-altitude long-range launch, autonomous all-weather attacks, and high-precision hits.”

“A typical munitions dispenser like this can disable an airfield for an extended period with only one shot because the sheer number of sub-munitions means the whole runway will be destroyed, and it is also possible that some of the submunitions will be mines, which will make attempts to repair the runway very risky,” said the Global Times, quoting a “Chinese military expert.”

The body of the weapon includes a faceted configuration, presumably to reduce its radar signature, plus pop-out wings to increase its glide range. Like the U.S. JSOW, this should allow for a precision strike at long range, without the launch aircraft needing to enter into the heart of high-threat defense zones around a high-value target, such as an airfield.

Runway denial weapons using submunitions such as the Hunting JP233 that was carried by British Royal Air Force Tornados carried a mixture of cratering munitions and delayed fuse mines, the latter of which are designed to hamper repair efforts.

The new Chinese weapon’s sub-munitions payload suggests it’s closer in concept to the now-retired AGM-154A variant of the JSOW of the 1990s era. This carried 145 small bomblets, however, it was removed from the inventory after President George W. Bush’s administration issued new guidelines on cluster munitions in 2008.

The AGM-154A-1, or JSOW-A, featured a BLU-111/B bomb inside and was optimized for use against troops, light vehicles, and surface-to-air missile sites out in the open. As well as these anti-airfield roles, the Chinese weapon could have similar functions as the American JSOW, which is heavily focused on the Destruction of Enemy Air Defense (DEAD) role, which would favor a similar large unitary warhead as an option in the sub-munition package.

The CCTV video includes a launch sequence of the new weapon. This involved an unidentified variant of the Shenyang J-8 Finback fighter jet. Later versions of this air superiority fighter, such as the J-8G, adopted a SEAD role, armed with YJ-91/Kh-31P anti-radar missiles. Notably, two test units fly late-model J-8s and it is possible that the video relates to one of these.

The AGM-154C-1, meanwhile, is a bunker-buster which carries a specialized British Royal Augmentation Charge, or BROACH, warhead to defeat reinforced concrete and other hardened targets. The AGM-154C-1 also added an imaging infrared seeker for improved accuracy, allowing it to strike moving targets.

The AGM-154 is quoted as having a range in excess of 62 miles and the more recent version features a two-way Strike Common Weapon Datalink from Collins Aerospace, which enables retargeting of the weapon while in flight, the ability to strike moving targets, and abort modes. It isn’t clear what kind of guidance the new Chinese weapon features, but JSOW navigates via a GPS-inertial navigation system and also features a thermal imaging infrared seeker.

The stated range suggests the new Chinese weapon isn’t powered, as is the case with the new AGM-154 variant, the JSOW-ER. Even the non-powered version has a range of nearly twice that of this Chinese derivative.

The unveiling of this new glide munition follows a number of sightings of similar weapons in recent years. At the Zhuhai Airshow in 2012, NORINCO showed its TL500 cluster glide bomb, a stealthy weapon that was quoted as having a range of 80 miles and weighing in at 1,500 pounds with a payload of 1,100 pounds. This was again shown in 2014, but now with the designation TL500/GB6. Again, this is a submunition dispenser that has been sighted undergoing carriage trials aboard a Shenyang J-16 and exhibited alongside the JF-17 Thunder and the Xian H-6 bomber. The TL500/GB6 is not only larger than the new weapon, but it also features a different configuration, with a cruciform tail unit (four fins) compared to the new weapon’s six.

This new weapon provides more evidence of China’s technological advances, that in this case could be employed to disable airbases via standoff strikes in a region already overflowing with tension. While this initial report focuses on anti-airfield applications, it underlines that the weapon offers multiple payload options and that it is able to perform surgical strikes. It potentially adds a lethal new capability to the dramatically expanding arsenal for its strike fighter and missile-carrying bombers.