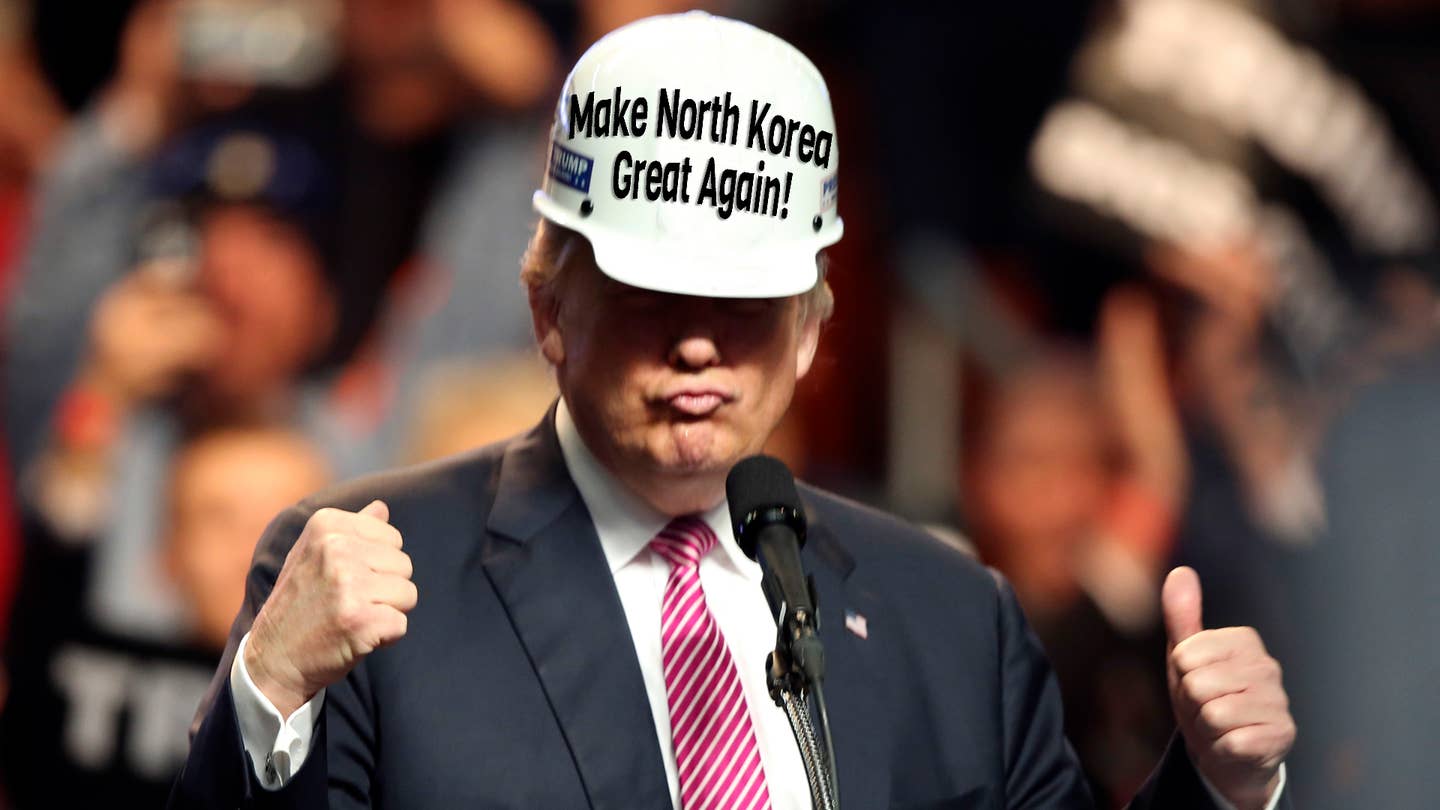 Donald Trump’s policy positions have been viewed as radical, absurd, or just downright logical, depending on who you ask. Above all, it seems the self-proclaimed master deal-maker wants to be Negotiator In Chief as much as Commander In Chief. He has even set his sights on the possibility of single-handedly bringing peace to the Middle East, as it would be the “toughest deal ever made.” Now, he wants to do what no President has done before: open up direct talks with North Korea’s ruler, currently the boy-tyrant Kim Jong Un.

“I would speak to him, I have no problem speaking to him,” Trump recently stated to Reuters. He went on to underline how he would also put pressure on China to help ease tensions on the Korean Peninsula: "I would put a lot of pressure on China because economically we have tremendous power over China…China can solve that problem with one meeting or one phone call."

Trump has a unique and at times eyebrow-raising perspective when it comes to the North Korean dictator, whose rule has been defined by his relentless push for nuclear weapons and ballistic missile capabilities as well as an absolutely brutal method of governance. During one of Trump’s signature campaign rallies last January, he described what seemed like tacit admiration for Kim Jong Un’s method of rule, stating:

“If you look at North Korea, this guy, he’s like a maniac. OK? And you’ve got to give him credit: how many young guys, he was like 26 or 25 when his father died take over these tough generals, and all of a sudden, you know, it’s pretty amazing when you think of it. How does he do that? Even though it is a culture, and it’s a cultural thing, he goes in, he takes over, he’s the boss. It’s incredible. He wiped out the uncle, he wiped out this one, that one. This guy doesn’t play games and we can’t play games with him. Because he really does have missiles, and he really does have nukes.”

Regardless of Trump’s questionable views on Kim Jong Un’s methods of securing and maintaining power, it begs the question: is the idea of opening up direct talks with North Korea at the highest levels a bad thing? I say no. In fact, it would be a net positive regardless of whether such talks were successful or not. In fact, I argued this exact point five years ago, when Kim Jong Un initially came into power.

The fact of the matter is that the North Koreans have had one major ask over the last decade-and-a-half of fragmented negotiations: unilateral negotiations with the United States, which they still ask for today.

For those who think it will embarrass the United States, I ask: how so? If we come ready to make a deal and North Korea clearly does not, we would then be more certain of their intentions than ever, and could adjust our foreign policy and military footprint accordingly. It's not as if the world community thinks highly of North Korea as it is; if they decided to walk away, or not show up at all, they would just go back to being the dangerous, clown-like regime they were before.

Finally, this proposition brings up the question of how, exactly, we as Americans view the President of the United States. Has the office become a royalty-like position, one where the king or queen does not dirty their hands with such unpleasant matters as direct peace negotiations with a bitter foe? Or does the President work for the American people to better our situation in any way possible, including using his power directly and in person to negotiate monumental deals even with our most dangerous enemies? I would like to think it's the latter. The office was never supposed to be “above” so many tasks of state; the fact that it has become so over the years is not a welcome, or beneficial, development.

You make think Trump is a blustering fool, and he may lack critical foreign and defense policy knowledge, but on this one issue he has the right idea—one that, to be honest, is refreshing to hear.

It's time to try a new approach with Kim Jong Un’s increasingly belligerent North Korea, and entering into direct talks with the best offer we can make out of the gate, delivered by the most powerful head of state in the world, is a great way of doing just that. And no matter who the next President is, hopefully that person is not above directly participating in the country’s most critical diplomatic negotiations, nor opposed to talking with our enemies. State dinners are all fun and games, and attending major trade and policy summits among the same old peers is well and good, but putting the weight of the Presidency behind the country’s most challenging diplomatic missions would be a welcome, if not essential, development.