Two Taiwanese F-16A Vipers have flown air patrol missions armed with live AGM-84 Harpoon anti-ship missiles. Taiwan’s Liberty Times said the missions were launched amid fears of imminent Chinese military exercises that are expected to be designed to simulate capture of the Taiwan-administered Dongsha Islands, in the northern area of the South China Sea.

The Taiwanese Air Force, also known as the Republic of China Air Force (ROCAF), launched two F-16s from the 5th Tactical Fighter Wing (TFW) based at Hualien Air Force Base, both of which carried a pair of the anti-ship missiles. Aviation reporter Roy Choo, who goes by the Twitter handle of @RXRoy, posted the Viper photos and provided brief details of the mission. “The 5th TFW F-16s at Hualien are usually tasked with anti-shipping missions with the Harpoons while the F-16s from the 4th TFW at Chiayi Air Force Base are usually seen employing AGM-65 Maverick missiles for anti-surface roles,” Choo told The War Zone.

The pairing of F-16 and AGM-84 Harpoon is a key element in Taiwan’s ability to defend important strategic waterways and territorial claims against a maritime opponent. The ROCAF operates a mix of older Harpoons plus the newer Block II AGM-84Ls. You can read more about Taiwan’s AGM-84s here and about the missile in general in this past War Zone piece.

Here are the photos of the F-16s carrying the missiles on patrol:

The Hualien unit is also tasked with reconnaissance patrols when Chinese vessels transit the Taiwan Strait. RF-16s assigned to the 12th Tactical Reconnaissance Group are equipped with the Phoenix Eye photo-reconnaissance pod, which is based on the AN/VDS-5 pod. The ROCAF is seeking to upgrade its F-16 reconnaissance capabilities through the procurement of UTC Aerospace Systems MS-110 long-range oblique photography pods.

Until recently, Taiwanese F-16s carrying live AGM-84s had been a very rare occurrence. Aside from live-fire drills, ROCAF Vipers have only been observed flying with live Harpoons when the People’s Liberation Army Navy (PLAN) aircraft carrier Liaoning transited the Taiwan Strait in 2016/2017. It is thought that the forthcoming Chinese exercises could include both PLAN aircraft carriers.

During road-runway flying training exercises in recent years, ROCAF F-16s have been seen armed with inert AGM-84 training rounds. On July 29, 2019, drills in the Taiwan Strait also included a pair of F-16s armed with live Harpoons simulating an attack on a high-value maritime target off Taiwan’s southeast coast. The Liberty Times said that two decommissioned ships were used as targets. Two F-16s simultaneously launched Harpoon missiles. This was reported as being the first time since 2001 that the ROCAF had live-fire tested aerial-launched AGM-84 Harpoon missiles.

This most recent instance of Taiwanese Vipers flying with live Harpoons can be seen as a clear sign of the determination of the island’s government to defend its territory. The U.S. Marine Corps recently flew similar missions with live Harpoons that also appeared to be a signal to Beijing, the details of which you can read in this previous report by The War Zone.

As far back as May, there have been reports that the Chinese People’s Liberation Army (PLA) was preparing for landing drills near Hainan Island in August to simulate the capture of Pratas Island, which is located in the Dongsha Islands group. Primary concerns hinge upon China’s strategic ambitions to seize territory in this strategically important location as this archipelago is located close to routes from Chinese naval bases on Hainan Island to the open Pacific.

In addition, Taiwan’s F-16A/B Block 20 aircraft are currently undergoing a long-awaited $5.3-billion upgrade. Taiwan’s Aerospace Industrial Development Corporation (AIDC) has partnered with Lockheed Martin’s for the work at its new facility in Taichung. Taiwan was the launch customer for the F-16V upgrade, known locally as the Phoenix Rising program. A total of 140 F-16A/Bs are being modernized locally under serial upgrades between 2018 and 2022, with initial deliveries being made to the 4th TFW at Chiayi. The upgraded aircraft feature the Northrop Grumman AN/APG-83 Active Electronically Scanned Array (AESA) radar and a host of other improvements.

Taiwan has stated that it also wants to procure land-based Harpoons to counter China’s growing naval might, the details of which you can read here. It is not clear which versions of AGM-84 Taiwan is looking to procure to boost it’s coastal defenses, however, reports suggest Taiwan may be looing to procure the Block II version of the missile, though this is not confirmed.

Taiwan has requested to buy Lockheed Martin F-35s, with no guarantee this will be sanctioned by Washington at any time soon. The stealth fighter would open up a whole new set of capabilities for the ROCAF. In the meantime, it’s the Harpoon-toting F-16s that form a key component of Taiwan’s ability to fend-off potential Chinese territorial advances.

If a war between the two countries were to break out, these weapons would be absolutely essential in providing Taiwan with any hope of slowing an all-out advance by the People's Liberation Army Navy. As such, the patrol of F-16s armed with live Harpoons isn't just a show of force, it will likely increasingly become an increasing necessity deterrent as tensions between Taipei and Beijing continue to increase. 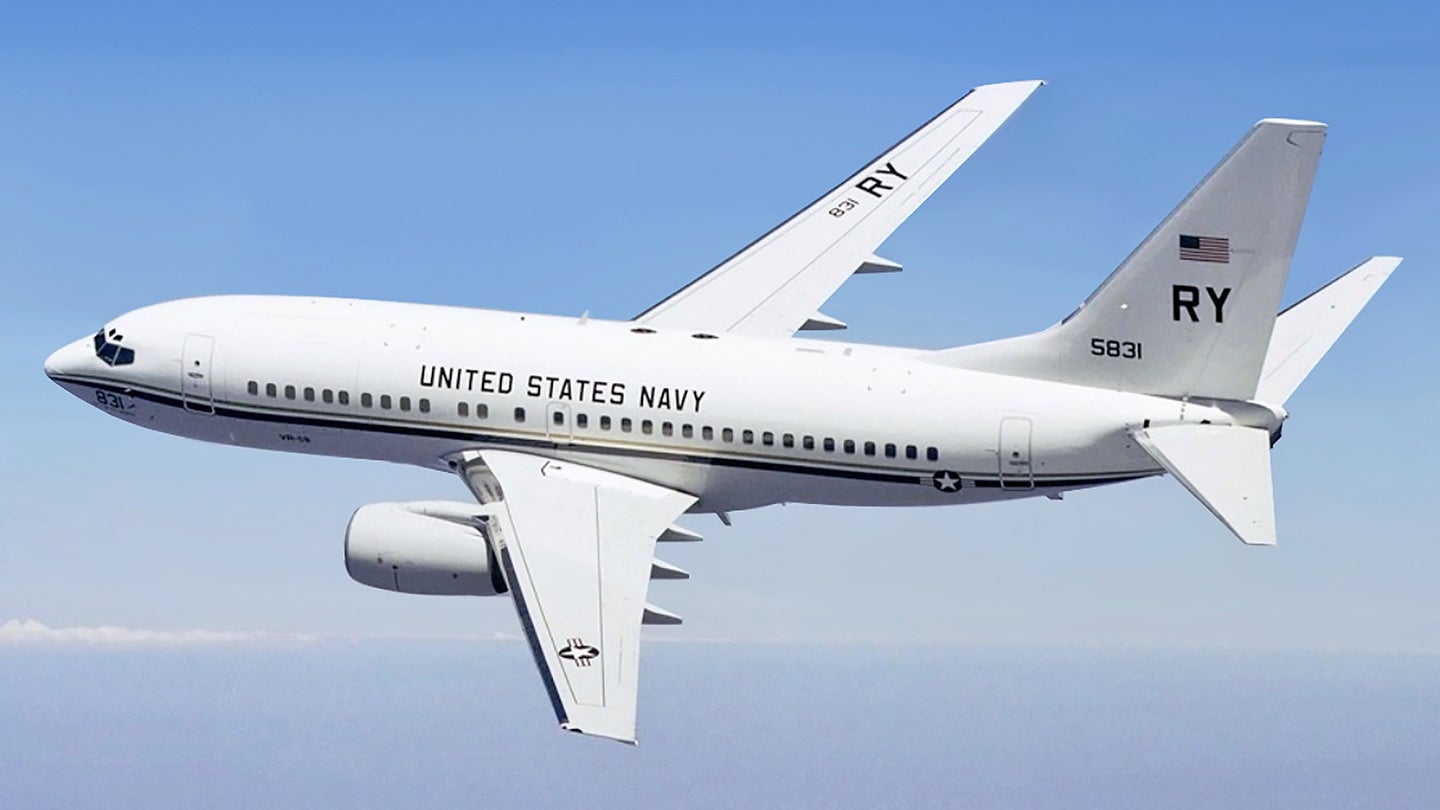 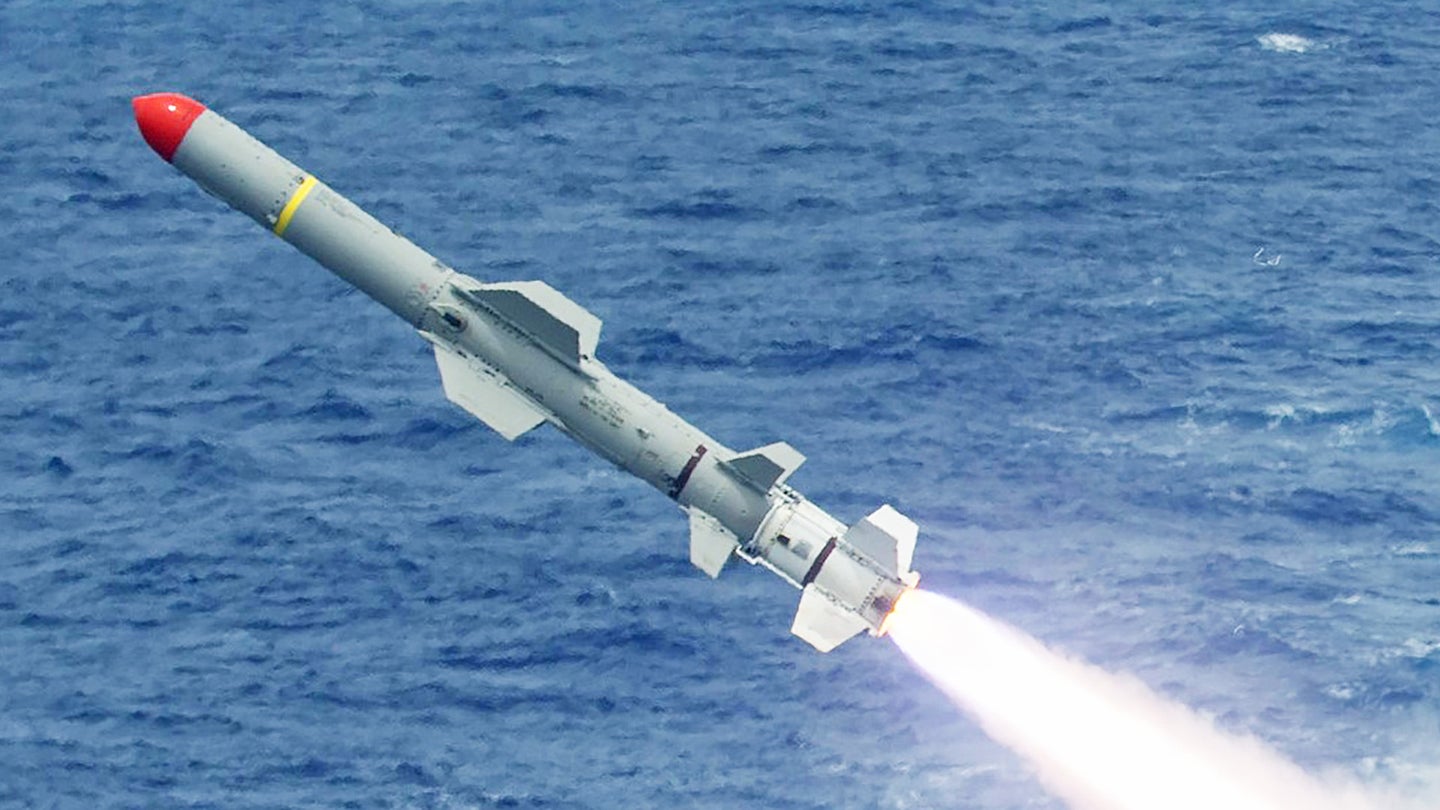 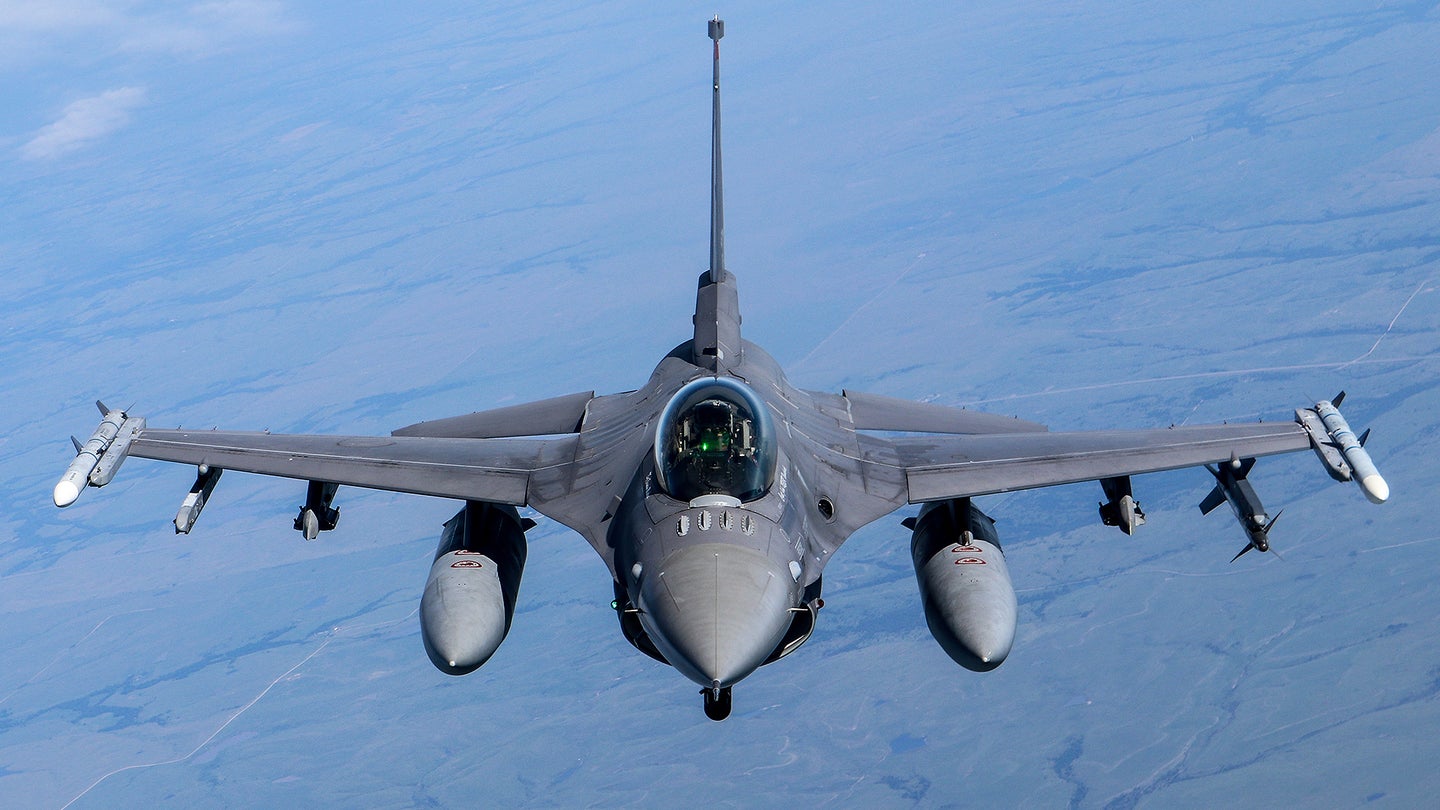