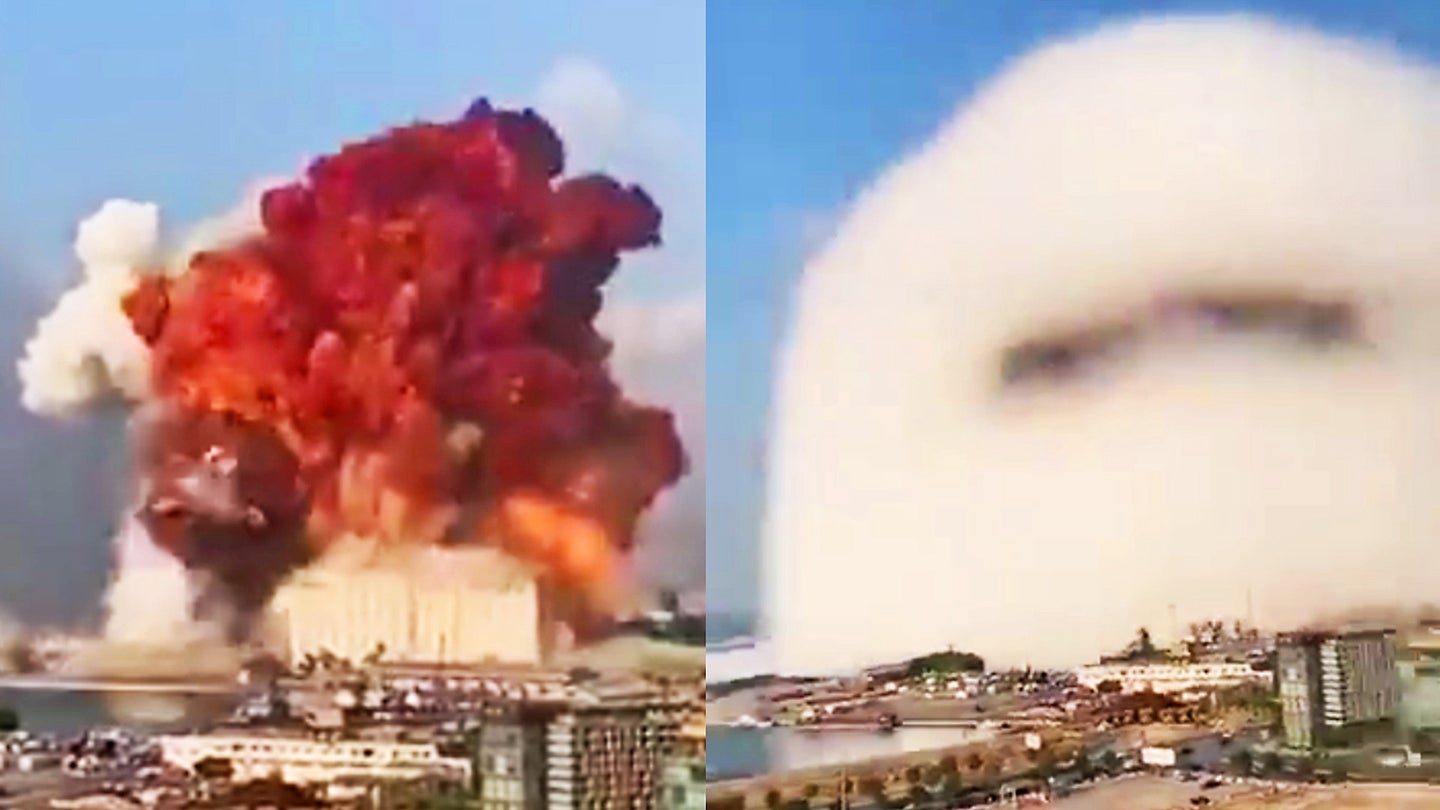 Details are still limited, but a gigantic explosion has rocked the area in the vicinity of the Port of Beirut, which is very close to the center of the city. Initial reports indicate that a ship carrying fireworks caught fire and exploded. Videos and pictures on social media from the scene show an initial explosion, with a big ball of smoke, which is then followed by a much larger secondary explosion resulting in a huge fireball and shockwave.

Video footage and images available show significant damage, even well away from ground zero, with windows and glass doors shattered in various areas of the city. Injuries have already been reported.

Other videos of the secondary explosion show a building right next to the epicenter that appears to suffer a direct hit from the blast.

One video definitely shows what could be fireworks cooking off.

Lebanon is currently in the grips of major political and economic crises, which have been exacerbated by the COVID-19 pandemic. The country is also home to Hezbollah, an Iranian-backed militant group, which may have been involved in a recently thwarted terrorist attack in the disputed Golan Height region between Israel and Syria.

Even though there is never a good time for a disaster like this, now is particularly bad.

Video and pictures are now emerging of the aftermath of the explosion, which looks to have been absolutely devastating. Some sort of conflagration in a warehouse on the dock itself may also have been the epicenter of at least one of the blasts.

There are reports now of hundreds of casualties and that the Lebanese military is assisting in the response efforts. Power outages are also being reported as a result of the explosions.

There are now reports that a burning container of fireworks then set off the huge secondary explosion at the nearby warehouse, which contained nitrate. It's unclear whether the fireworks-filled container was actually on a ship or was on the dock.

The head of Lebanon's Beirut Governorate, which includes the capital city of the same name, has also described the incident as a "national disaster akin to Hiroshima," referring to the U.S. nuclear bombing of Hiroshima, Japan, during World War II.

Major General Abbas Ibrahim, head of Lebanon's General Directorate of General Security, reportedly said in a televised interview that the container that was the source of the initial fire and explosion contained confiscated “high explosive materials" and that it would be "naive to describe such an explosion as due to fireworks."

Lebanese Prime Minister Hassan Diab has also declared that tomorrow will be a national day of mourning in the country. The total number of casualties remains unknown, but there are reports that at least 10 firefighters are missing. Imagery of the aftermath continues to emerge showing the shocking damage.

There are reports that the blast in Beirut was so strong that people on the island of Cyprus, some 240 kilometers (nearly 150 miles) northwest in the Mediterranean Sea, felt it.

Lebanese authorities have begun to release casualties figures from this tragic incident, with a reported 30 people dead and some 2,500 more wounded.

Offers of support are beginning to flow in from around the world, with Israel and Iran, among others, already pledging assistance.

Videos continue to emerge on social media showing the aftermath of this incident, which is truly catastrophic. The numbers of those killed and wounded have also increased, with these explosion now having left at least 50 people dead and around 3,000 injured.

Lebanon's Prime Minister Hassan Diab has now said that 2,750 tons of ammonium nitrate, which was confiscated six years ago and had been left in an unsecured warehouse ever since was responsible for the secondary explosion that has caused untold destruction. He has vowed to punish whoever is responsible for creating this situation, which was clearly a massive accident waiting to happen.

There are also reports that the smoke from the explosion and associated fires is toxic and the U.S. Embassy in Beirut has advised any American citizens in who are in that part of the city to "stay indoors and wear masks if available."

You can follow our continuing coverage of this incident here.