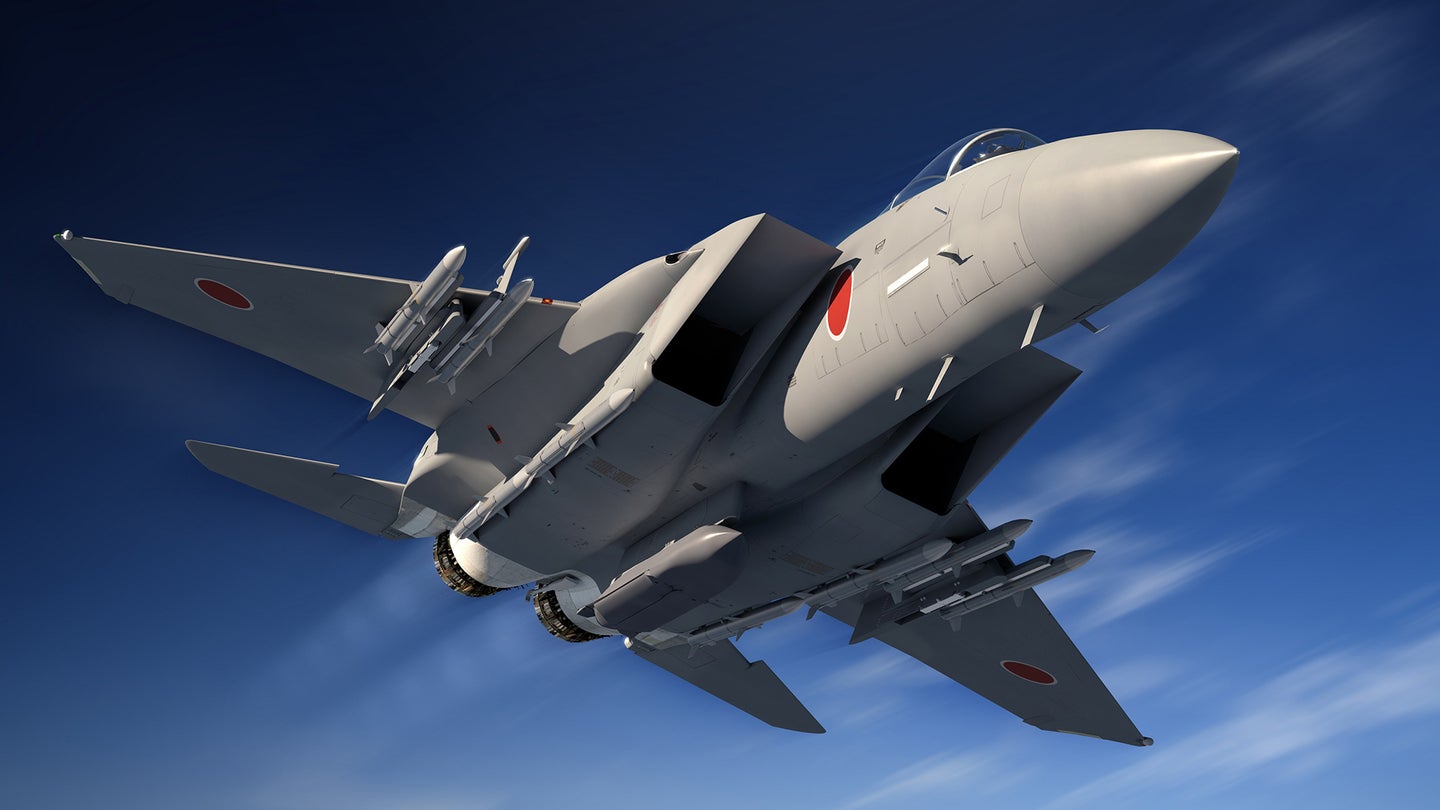 Boeing has completed a Direct Commercial Sale (DCS) agreement with Mitsubishi Heavy Industries (MHI) to implement upgrades to Japan’s F-15J Eagle fleet. The contract is part of the larger $4.5-billion modernization program that was announced by the U.S. Government in October 2019. Boeing says this DCS contract “lays the foundation” of the modernization program, although the Japanese government has not yet formalized the project.

An artist's impression released by Boeing to accompany its announcement depicts an upgraded Japanese F-15 carrying a large missile on its centerline station. This appears to confirm long-held ambitions to equip these fighters with Lockheed Martin's AGM-158 Joint Air-to-Surface Standoff Missile (JASSM). The F-15J's arsenal could potentially grow to include additional ordnance, such as hypersonic weapons that are in development in Japan.

Long-awaited upgrades to Japan’s Eagles would take 98 aircraft to F-15JSI “Japanese Super Interceptor” standard with the addition of a new electronic warfare system, new avionics, new weapons, and possibly more. Following a similar operational model to the one adopted by the U.S. Air Force with the F-15EX, the Japanese Air Self-Defense Force (JASDF) will use its upgraded Eagles to complement its large planned force of Lockheed Martin F-35s. Targeting 98 upgraded Eagles aligns with the JASDF's plans to only recapitalize around half of its F-15J fleet, the rest being swapped for 105 F-35As as outlined in the Medium Term Defence Program.

MHI built 163 F-15Js and 36 two-seat F-15DJs under license, plus 14 aircraft that were assembled by McDonnell Douglas at its St. Louis plant, in Missouri.Unlike the USAF, which has decided to buy brand new F-15EXs from Boeing instead of upgrading its existing F-15Cs, Tokyo is will retain its 1980s-vintage F-15Js and upgrade them with features from the Advanced Eagle, which is now the production standard aircraft. Boeing had previously offered the USAF an extensive package of upgrades for its Eagles dubbed F-15 2040C. However, it has instead opted to recapitalize the fleet with up to 200 F-15EXs.

The Direct Commercial Sale means MHI will act as the prime contractor for the work, with Boeing saying it will “provide MHI with retrofit drawings, ground support equipment and technical publications for the upgrade of the first two F-15J aircraft to the Japan Super Interceptor configuration.”

The proposed upgrade package outlined in a DSCA notice on October 29, 2019, listed the following:

The upgrade is built around the same core avionics as the F-15EX, with the Raytheon APG-82 (v)1 Active Electronically Scanned Array (AESA) radar and Boeing’s Advanced Display Core Processor II (ADCP II), which it calls “the world’s most advanced mission computer.”

The DSCA solicitation also does not include life-extension efforts to the F-15J airframe. A brand new F-15EX is supposed to have a useful life of an amazing 20,000 flight hours. Nor does it include provision for Boeing’s new 11x19-inch Large Area Display (LAD), it’s low-profile Head-Up Display (HUD), however the Boeing media release mentions an “all-new advanced cockpit system.” It’s not clear if this refers to the LAD or another less extensive upgrade such as the F-15C’s Passive Attack Display, which is used to display a number of information sets, including imagery from the AN/AAQ-33 Sniper Advanced Targeting Pod for air-to-air visual identification.

The upgrade package also notably lacks any mention of an infra-red search and track (IRST) sensor. This is particularly important for the F-15JSI as it faces future stealthy threats in the air defense mission now and into the future. Its omission suggests that MHI could be looking to integrate a domestic solution for this important capability. Japan has extensively explored an integrated IRST system for the F-15J, and last year a new indigenous podded IRST system was observed during flight-testing aboard an F-4EJ Phantom II.

While dubbed a “Super Interceptor,” the addition of the APG-82 (v)1 AESA radar and JASSM tips a nod to multi-role capabilities. This radar is now retrofitted to USAF F-15E Strike Eagles and is the system chosen for the F-15EX. In 2017, there were initial reports that Japan wanted to transform its F-15s into cruise missile carriers for long-range strike missions. You can read more in this previous War Zone report.

USAF F-15E Strike Eagles are already equipped to carry the extended-range version of the AGM-158, known as JASSM-ER, as well as JASSM. Strike Eagles from the 366th Fighter Wing recently used the weapons in combat operations in Syria, details of which can be found here.

The new AESA radar will provide the F-15JSI with impressive new air-to-ground capabilities and would also enable them to perform maritime patrol and interdiction missions. Indeed, Japan could also look to purchase Lockheed Martin’s AGM-158C Long Range Anti-Ship Missile, or LRASM. Until now, only Israel has sought to transform F-15A/B/C/D fighters into multi-role platforms.

Japan is also developing indigenous hypersonic weapons, as detailed here. In the Boeing media release that accompanied the formal announcement of the USAF F-15EX contract, the company said: “The F-15EX carries more weapons than any other fighter in its class and can launch hypersonic weapons up to 22 feet long and weighing up to 7,000 pounds."

Like the F-15EX, Japan’s upgraded Eagles could also be kitted-out to act as weapons trucks and be able to carry the kind of large hypersonic weapons that are in development.

The F-15JSI could also field Japan’s new indigenous air-to-air missile in the shape of the advanced AAM-4B, but Japan has also expressed interest in the AIM-120 Advanced Medium-Range Air-to-Air Missile (AMRAAM), which is smaller than the AAM-4B and offers a shorter maximum engagement range.

Japan has implemented a number of small upgrades for its F-15Js over the years, but most have become bogged-down in budgetary and political issues. In recent years, the JASDF F-15s have received Link 16 data link connectivity, and some aircraft are equipped to enable pilots to wear the Joint Helmet Mounted Cueing System, known as JHMCS.

“These upgrades will deliver critical capability for national and collective self-defense, in which the F-15J plays a key role. At the same time, they will provide MHI and our partners in Japan’s aerospace defense industry with an opportunity to enhance their own extensive engineering capabilities,” said Will Shaffer, Boeing Japan President, referring to F-15JSI.

The JASDF is facing a torrent of airspace incursions from Chinese military aircraft, and the number of scrambles undertaken by its F-15Js continues to rise. Keeping the F-15J reliable and relevant will be key to maintaining air sovereignty around the island nation's territory. Enhanced F-15Js will also serve to help fill-out Japan's air combat capability until the fielding of Japan’s next-generation stealth fighter, which will replace the JASDF’s Mitsubishi F-2 fighters by the mid-2030s.

In the meantime, the F-15JSI upgrade, along with F-35 procurement, will support the JASDF’s immediate needs. Boeing says MHI is now developing a detailed modification plan for the 98 F-15s and that it will prepare its facilities and workforce for the induction and upgrade of up to 98 aircraft beginning in 2022.

This is the latest in a series of renewed business opportunities for Boeing with the F-15, both in terms of new builds and upgrades. It seems that the F-15JSI upgrade is set to ensure Eagles continue to defend Japan well into the future.