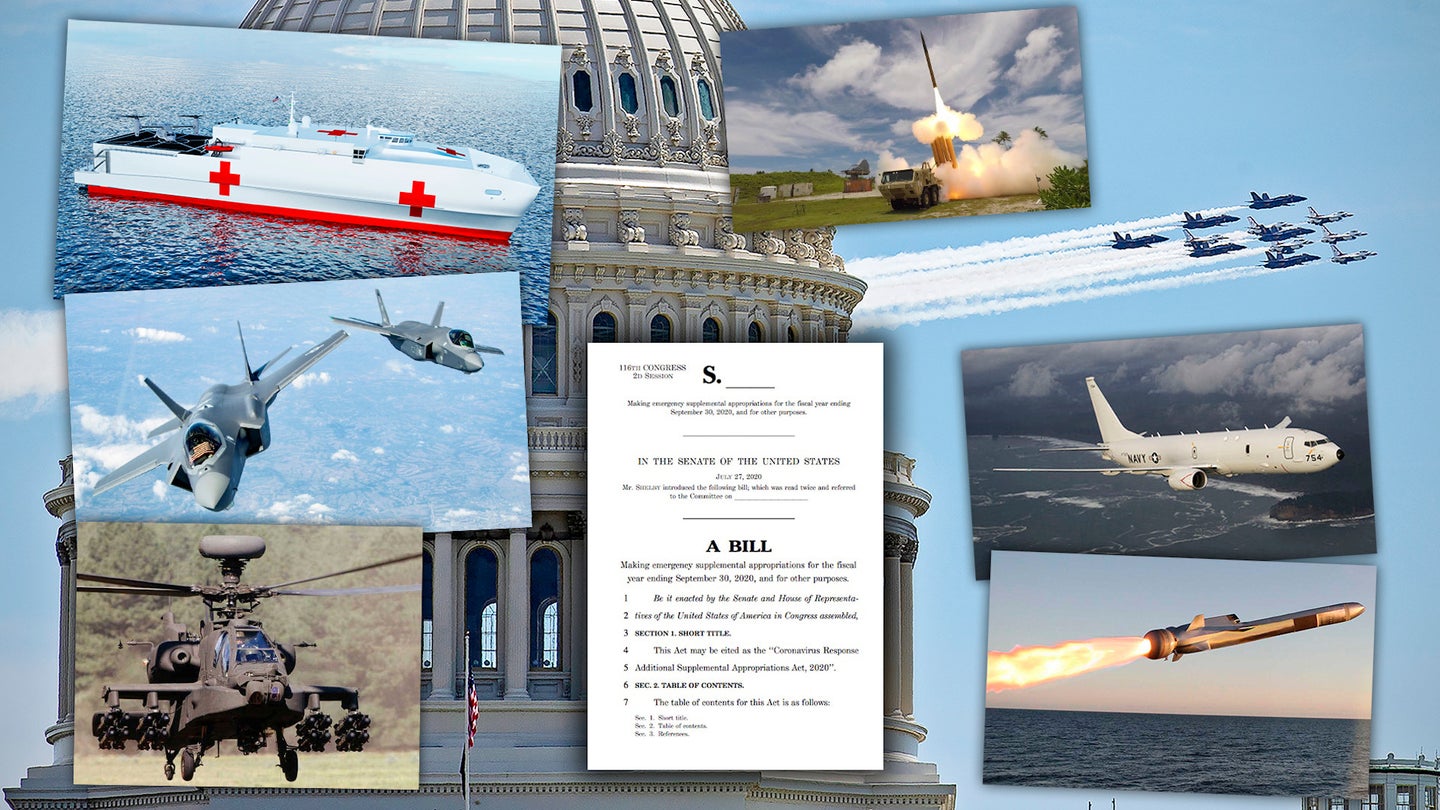 Yesterday, Senate Republicans unveiled a proposed bill that would authorize a $1 trillion spending package ostensibly to tackle the COVID-19 pandemic and the impacts it has had, especially economically, across the country this year. The draft law immediately drew criticism for including a raft of line items that seem at best tangentially related to those efforts, while many are not at all, including around $30 billion in defense spending, which would be on top of the more than $705 billion in the proposed defense budget for the 2021 Fiscal Year.

Senate Appropriations Committee Chairman Richard Shelby, a Republican from Alabama, formally introduced the proposed bill on July 27, 2020. It would need the full Senate to pass it and for the Democrat-controlled House of Representatives to pass their own version before it could even head to President Donald Trump's desk, where he could then sign it into law.

If it were to become law today, here are the main specific defense-related spending items that would be authorized:

Every single line item in the draft bill, including these proposed defense appropriations, is stated to be justified as being "to prevent, prepare for, and respond to coronavirus, domestically or internationally."

"I believe we need to act with a sense of urgency. The American people are fighters, but the accumulated strain of this pandemic is a serious burden on folks," Senator Shelby said in a statement that came along with the proposed law. "With the additional resources this legislation provides, I believe we can give them greater confidence that we are getting our arms around this virus. That, I believe, is the key to unleashing the American economy and hitting our stride as a nation once again."

Critics of the draft legislation have openly questioned how various provisions, including the defense-related items, support those objectives. Some of this, especially the Defense Production Act purchases, which accounts for a sixth of the proposed defense-related spending, as well as funds to help shore up the defense industrial base, certainly seems relevant to the broader effort to combat the COVID-19 pandemic.

The relationship between much of the other spending and managing the ongoing health crisis seems highly dubious, if not outright ludicrous, especially given the continued needs of those on the front lines of the pandemic, as well as the struggles of regular Americans to make ends meet. "Amphibious ships don’t feed hungry children," House Appropriations Committee Chair Nita Lowey, a Democrat from New York, said in her own statement in response to Shelby's spending package.

Some of the items make it clear that some legislators are looking to use the bill as a vehicle for pork-barrel spending. A closer reading also shows that there are additional political complications influencing at least some of the proposed appropriations.

Eight of the defense-spending items include specific language stating that "funds appropriated by this section may not be transferred to 'Drug Interdiction and Counter-Drug Activities, Defense." These provisions are effectively seeking to restore funding that Trump's Administration has diverted within the defense budget to the construction of controversial walls along the United States' southern border with Mexico without directly challenging the President. Last year, in the face of strong bipartisan resistance to those plans, Trump had declared the situation on the border to be a national emergency and invoked laws allowing him to use funds already authorized for other major defense projects for the wall without congressional approval.

All told, especially given the resistance to these provisions from Democrats in the House of Representatives, it seems very unlikely that this bill will pass in its current form. However, it remains to be seen whether some of the defense spending, as well as other controversial items, will find their way into a final law that would also provide badly needed assistance to many average Americans.

If anything, it underscores Washington's addiction to pork-barrel tactics and a never-ending thirst for more military spending.

Have you seen any Apache attack helicopters helping out at hospitals or THAAD missile batteries defending against COVID-19?

Yeah, we haven't either.