The clandestine stealth fighter overflight that outraged Austria in the months leading up to a second war with Iraq. 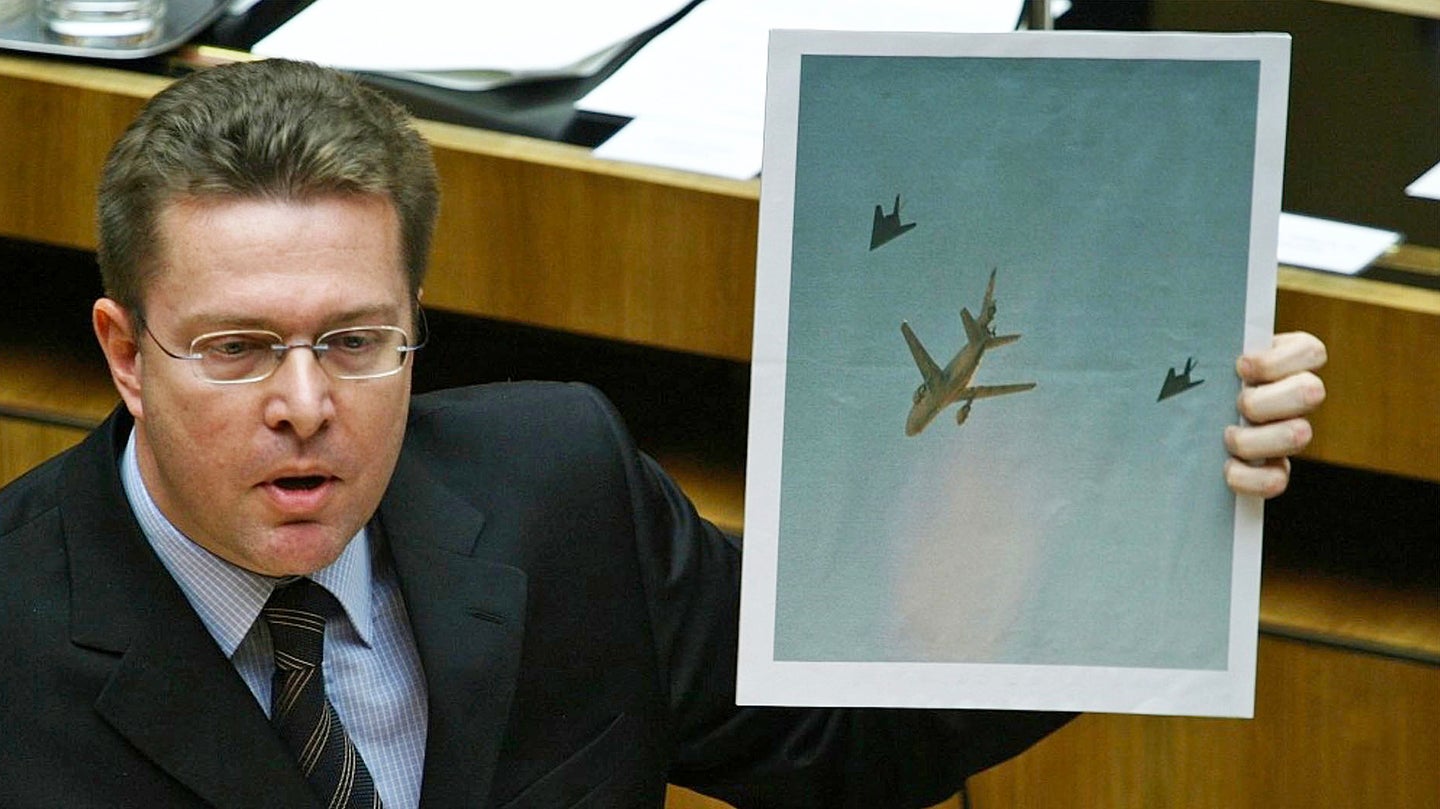 Recent media reports regarding the Republic of Ireland’s ability to defend its own airspace have unearthed the hitherto scarcely reported story of when the U.S Air Force tried to sneak two Lockheed F-117A Nighthawks through Austrian airspace. A related post on Twitter referred to the Austrian story as a reminder that fighter aircraft are an integral part of a modern air defense system and vital to the ability to conduct air policing.

The story dates back to Oct. 18, 2002, when the USAF filed a flight plan for what turned out to be a McDonnell Douglas KC-10A Extender tanker to fly through Austrian airspace. What the USAF reportedly didn’t divulge was that two F-117s were neatly tucked under the wings of the big tanker in close formation during the flight. The U.S. military regularly overflew Austria and Switzerland when routing from Germany to Italy or to the Middle East to avoid long transits over France, however, the two the neutral countries could block any unwanted transits.

It was a time when the U.S. military was building up its forces in the Middle East ahead of a possible offensive against Saddam Hussein’s Iraq. Even NATO member states were struggling to secure public support for American overflights or support from their bases.

Austria's lack of credible air policing aircraft underscored a feeling of weakness in the face of U.S. strength. It flew a fairly ancient fleet of Saab J-35ÖE Drakens for quick reaction alert, armed only with AIM-9P3 Sidewinders, as well as two internal 30mm cannons. However, it remained bullish about the use of its airspace. "Not a single American plane has any business flying over Austria," said Peter Pilz, a Green Party member of the Austrian Parliament in a report in the Wall Street Journal in 2003. Austria retains clear guidance for the procedures of transiting its airspace, as detailed on this web page.

Generally, diplomatic clearance was more straightforward for big unarmed tankers and transports than aircraft capable of employing weaponry. Moreover, the flight plan stated the aircraft seeking the transit was a “DC-10,” which would largely go unnoticed. This was submitted and an application was made for permission for the aircraft to fly from Spangdahlem, Germany, routing over Austrian airspace, using the radio callsign “Cacti 31.” It was approved. However, Austrian air traffic control officials spotted that the plan included a DC-10 serial plus others. This serial was subsequently changed, which aroused further suspicion. Shortly before 3:00 PM, the aircraft was detected by the Austrian air defense network’s new Goldhaube radar system as the aircraft approached the Austrian Tyrol region.

Due to the irregularities in the flight plan, two Austrian Air Force Drakens were “Alpha Scrambled” from Zeltweg air base. At 3:03 PM, the “DC-10” entered Austrian airspace and then deviated from its intended track. According to Austrian aviation writer Georg Mader: “After our two Drakens closed-in, we identified two F-117s very close below the KC-10.” Mader adds: “[The] US formation was in our airspace for exactly 10 mins.” It was also said at the time that the formation tried a “defensive maneuver” as the Austrian fighters closed in.

The two Sidewinder-toting Drakens shadowed the formation and captured imagery, which was presented by the Austrian Minister of Defense Herbert Scheiber during a meeting of the National Security Council and was presented as part of a diplomatic protest lodged at the US embassy in Vienna.

According to the Wall Street Journal report and an online feature by Austrian defense journalists, MP Peter Pilz spoke at the National Security Council meeting on Oct. 24 accusing the government of authorizing illegal overflights. However, the Austrian Ministry of Defense presented the imagery to prove that such incidents were being taken very seriously.

Austria was highly alert to airspace incursions, which were of particular significance during the Balkan Wars of the 1990s. It increased its quick reaction alert to include primary and standby pairs of Drakens. Due to the country’s geography, incursions often only occur for a few fleeting minutes, especially where the flight time between German and Italian airspace is very short.

According to reporting at the time, the U.S. Embassy said the flights had been properly planned and after the story broke, the Austrian Defense Ministry said there had been confusion, but stopped short of accusing the U.S. of breaking the rules. It remains unknown if the F-117s were equipped with radar reflectors or not during their transit close to the KC-10, but either way, it would have likely appeared as one target.

Austria’s air policing remains a thorny subject to this day. The acquisition of 15 Eurofighter Typhoons has been a contentious issue since it was announced in 2002. Austria recently announced that it is planning to retire its aging Saab 105ÖE jet trainers that have been used for air surveillance and that the Eurofighters would be retained for the foreseeable future. As if to add more confusion, a report from Jane’s has subsequently revealed a move by Indonesia to purchase Austria’s Eurofighters.

At a time when air policing in the European Union is under the spotlight, the Austrian F-117 overflight fiasco has not only reemerged, but it has been held up as an example of why a credible air defense force is so important. It also serves as a useful reminder of a tactic that remains in use to this day when air forces want to move fighter aircraft without drawing unwanted attention.