The F-15C with a jet-powered drone attached to its left underwing pylon was photographed last winter by @tucson.plane.spotter on Instagram. The aircraft's intake coverings feature the 57th Aircraft Maintenance Squadron's insignia. The unit is assigned to the 57th Maintenance Group, part of the 57th Wing, which is very unique as it supports the huge range of aircraft that are hosted at Nellis Air Force Base where it calls home. This includes various tests of developmental systems and subsystems aboard the vast majority of the Air Force's combat aircraft fleet. It turns out that the F-15C in question was borrowed from the 142nd Fighter Wing for trials related to the UTAP-22 drone that could last to around a year.

Kratos describes the UTAP-22 as an "unmanned aircraft capable of collaborative operations with manned assets in contested environments," a role also commonly referred to as "loyal wingman." This means that the drone is primarily intended to operate at least semi-autonomously based on instructions from another aircraft with an actual pilot in it. Beyond their primary loyal wingman mission, the company has also demonstrated the ability for multiple Makos to work together cooperatively on their own and they could operate independently, as well.

The California-headquartered drone maker self-funded the development of the UTAP-22, which is derived from the BQM-167 Skeeter, as part of a $50 million initiative to develop a low-cost tactical unmanned aircraft. In 2012, Kratos had bought Composite Engineering, Inc. (CEI), which designed the BQM-167. The Skeeter, which is presently in service with the U.S. Air Force, is an expendable target drone that offers fighter pilots something to actually shoot at during live-fire training.

Outwardly and in terms of general performance, the UTAP-22 is very similar to the BQM-167. Both can fly to altitudes of up to 50,000 feet, have a top speed just under Mach 1, can pull up to 9Gs, can carry substantial external stores, are highly reconfigurable, and can stay aloft for around three hours, which translates to a maximum range of around 1,500 miles, in total.

The UTAP-22s, which have a reported price of between $2 and $3 million, can carry up 350 pounds of stores or other payloads inside 8.5 cubic feet of readily reconfigurable internal bays, as well as an additional 500 pounds of stores externally on underwing pylons and wingtip pods. Possible payloads could include munitions, as well as other systems, such as electronic warfare jammers or various kinds of sensors to carry out intelligence, surveillance, and reconnaissance (ISR) missions.

Kratos originally designed the Mako to take off from a static launcher on the ground using a rocket booster, as is the case with the BQM-167. After conducting its mission, the drone deploys a parachute and descends to the ground or the surface of a body of water where personnel can then recover it for refurbishment and reuse. It's not clear whether the drone is now capable of routine air-launched use, if so, what platforms beyond the F-15 may be capable of deploying it this way.

In 2015, Kratos announced that the UTAP-22 had flown for the first time. In November of that year, the company conducted a second set of flight tests at Naval Air Weapons Station China Lake (NAWS China Lake) that included f the drones flying 'tethered' via data-link to a U.S. Marine Corps AV-8B Harrier jump jet, supporting the Harrier’s mission in a semi-autonomous fashion. Multiple Makos have also flown together during other tests.

During the collaborative tests in 2015, the AV-8B carried a Tactical Targeting Network Technology (TTNT) data link to communicate with and issue commands to the unmanned aircraft. TTNT is already found on the U.S. Navy's EA-18G Growlers and will be a feature on that service's Block III F/A-18E/F Super Hornets.

The Air Force has also acquired at least one UTAP-22, though, curiously, the one seen in the picture attached to the F-15C at Tucson Air National Guard Base carries Navy markings. In 2018, the news came that Mako had been cleared for sale to a number of allies overseas, although details about those potential deals remain shrouded in secrecy. Still, it is the first known loyal wingman drone to reach such a milestone.

The Mako was also a stepping stone to Kratos' XQ-58A Valkyrie, previously known as the XQ-222, a purpose-built low-cost unmanned aircraft also intended to perform as a loyal wingman-type drone, as part of a networked autonomous swarm, or by itself in various roles, including as a communications and networking relay node. XQ-58A is a clean-sheet design and is roughly three times the mass, has stealthy features, and is more advanced overall than the UTAP-22.

The particular UTAP-22 configuration seen under the Eagle's wings is unlike anyone we have seen before. The pods on the tips of the wings are new, although not new to the baseline BQM-167 design, which can accept a wide array of modular wingtip pods. It isn't clear what they are housing, but the covers on the end apertures look very similar to the design of missile approach warning systems (MAWS) sensors that are used to provide threat awareness and countermeasure cueing on combat aircraft. Their placement would provide seamless coverage around the horizontal plane around the aircraft. If there are additional sensors pointing up and down on the fuselage, the coverage would be spherical all around the aircraft.

The biggest unknown in the drone's configuration is what the large faired golden ball-like protrusion on top of the forward fuselage is meant to do.

It is possible that this is a rotating infrared search and track system (IRST) that can scan the skies ahead of the drone, and far ahead of the Eagle in the loyal wingman role, for potential threats, including those with very small radar cross-sections. It could also be a shorter-wave infrared sensor used to provide navigation and general forward situational awareness for man-in-the-loop control or even totally autonomous operations.

UAE's Block 60 F-16E/F Desert Falcons have a similar system installed on their noses, although the concept dates back to the 1980s in the guise of Falcon Eyes infrared sensor. You can read all about the UAE's system and Falcon Eyes in this piece of ours. Generally speaking, imaging infrared sensor systems can have gold-colored opaque glass enclosures that they peer through. The AGM-65D/G Maverick or the LANTIRN system's navigation pod are good examples of this. On the other hand, the enclosure could be a solid metallic golden finish, with the sensor swiveled inward at the time the photos were taken.

With perfect spherical infrared coverage via the distributed infrared sensors and a much more capable primary infrared sensor mounted on the nose, one could potentially fly it with somewhat unprecedented situational awareness for a high-performance unmanned aircraft. It could also provide an enhanced sense and avoid capability that would allow it to autonomously operate with other aircraft in dense airspace with a high margin for safety and without relying on a data-link alone for comparative positioning information. Maybe having a robust and passive ability to safely navigate alongside the manned aircraft that it supports was the idea behind this UTAP-22 test.

These are just a couple of the many possibilities. We really don't know what the UTAP-22 is configured to accomplished beyond its primary capability set as a loyal wingman platform and the ability to be networked with other UTAP-22s. What we do know is that whatever is going on with these trials, the ability to carry and launch the UTAP-22 from under an Eagle's wing is central to them.

The Eagle would be the obvious fighter for this mission. It has the ability to lug outsized payloads into the air like no other fighter in the U.S. inventory. This has played a huge factor in the Air Force pursuing the F-15EX, something we posited in detail when we broke the story two years ago.

There are a number of manned-unmanned teaming and attritable (optionally expendable) unmanned combat air vehicle (UCAV) initiatives currently underway across the DoD's portfolio, with the Skyborg and XQ-58 Valkyrie programs—the latter, as already noted, is also a Kratos product—being the most well known. Could this system be a precursor to those endeavors or something altogether different?

Drones that can dogfight and even potentially beat a human in that highly dynamic air-to-air arena has been a major talking point and objective of the Air Force's recent unmanned experiment push. A major initiative to do just this is underway, with a pilot set to face off against a drone in just one year's time. The UTAP-22 would be far better suited for this experimental role due to its performance capabilities than some of the alternatives, such as the XQ-58, and it is available now, easily reconfigurable, and affordable. Could this be our first glimpse of a dogfighting drone?

The aircraft's configuration would make sense for this, but unfortunately at this time, we just don't know.

What do you think? Do these sensors look familiar to you? Let us know in the comments below!

Author's note: A big thanks to @tucson.plane.spotter for letting us use his images in this piece. Make sure to check him out on Instagram by clicking here. 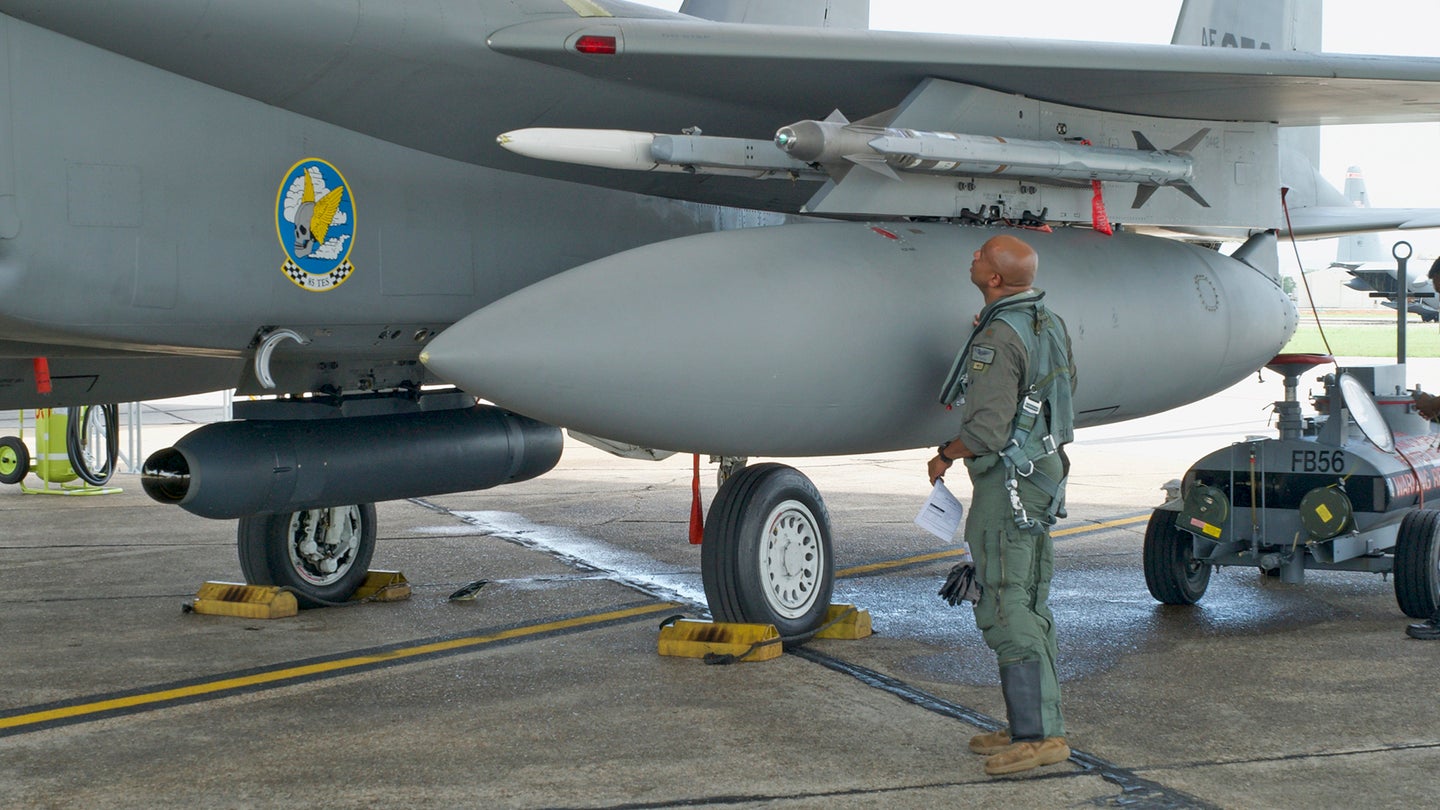 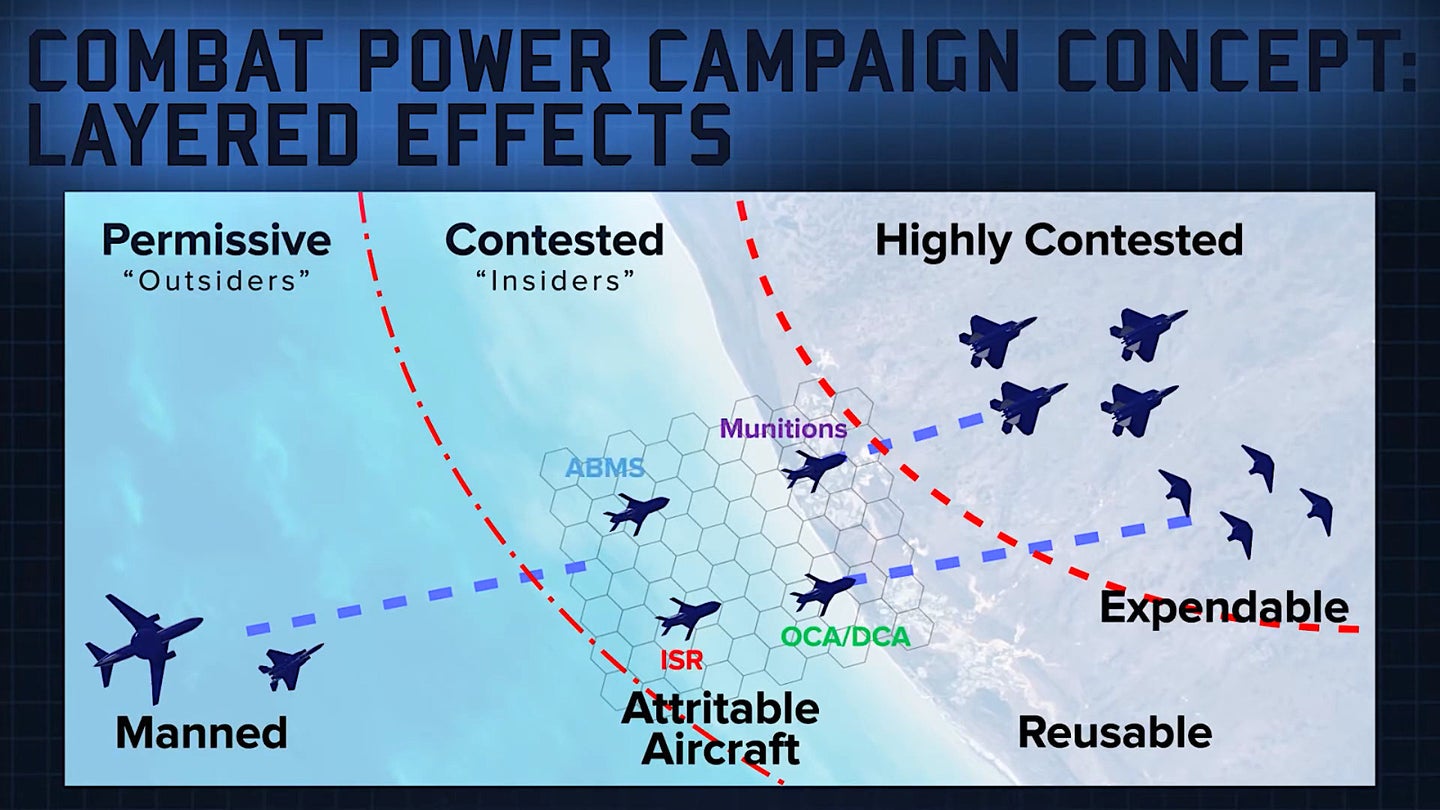 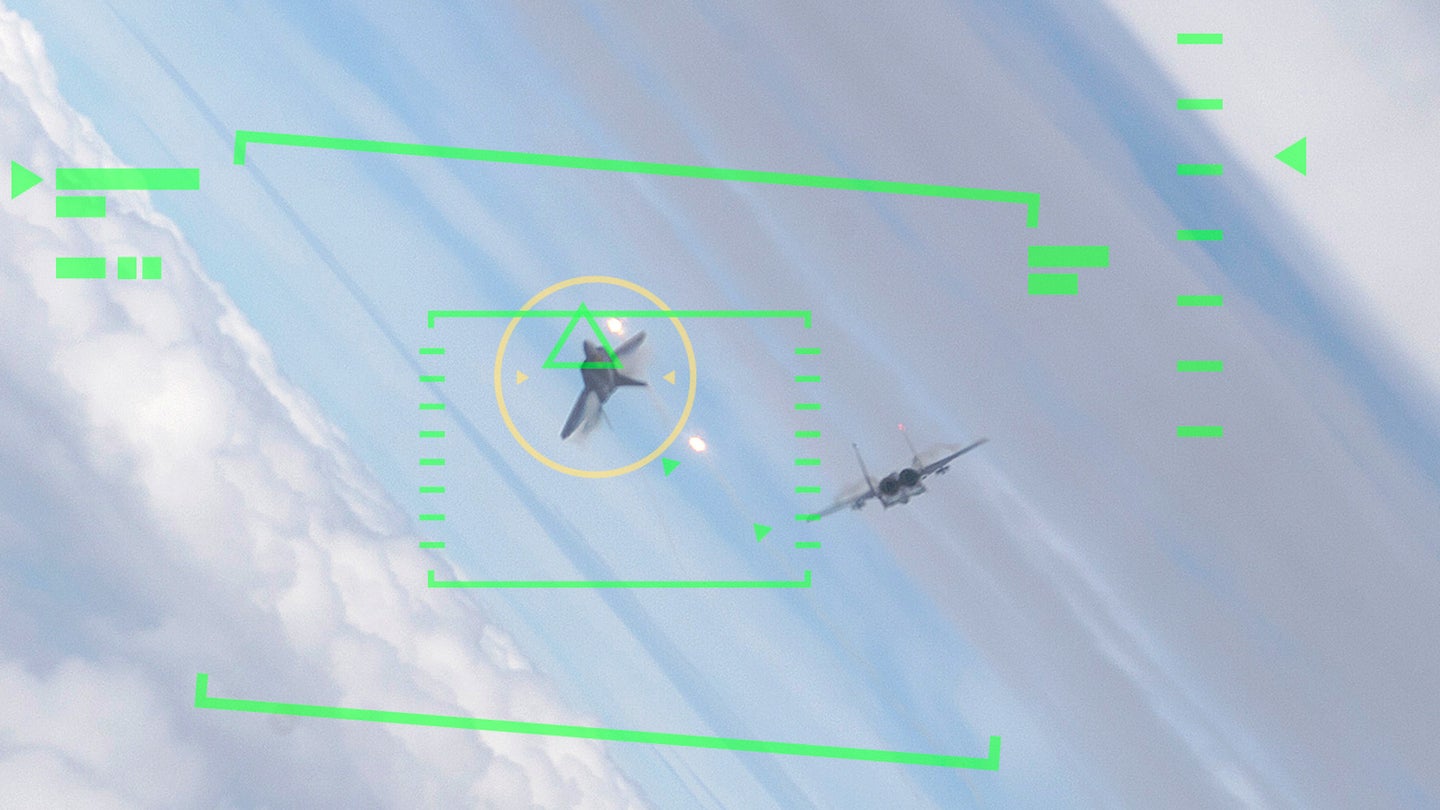 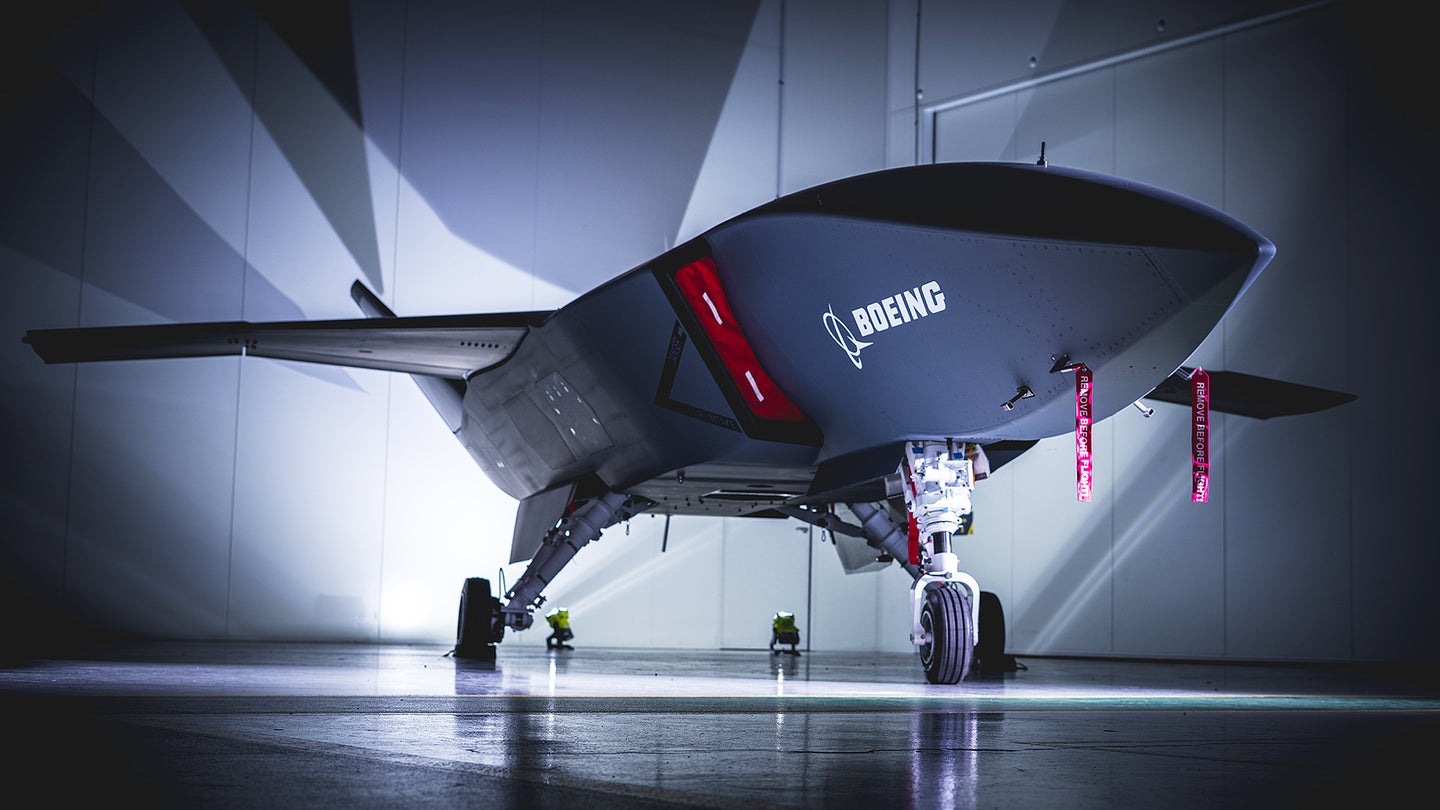 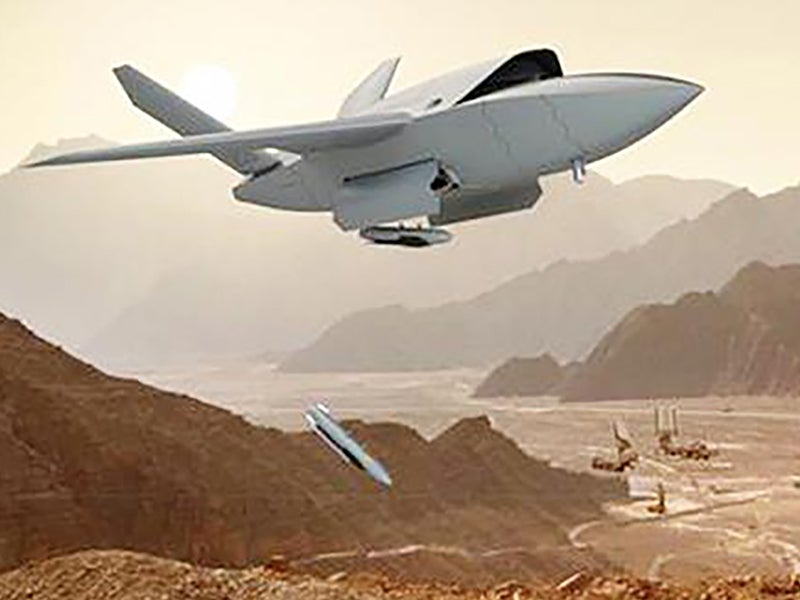