Authorities in Afghanistan have confirmed that an A-29 did crash in the northeastern portion of the country. 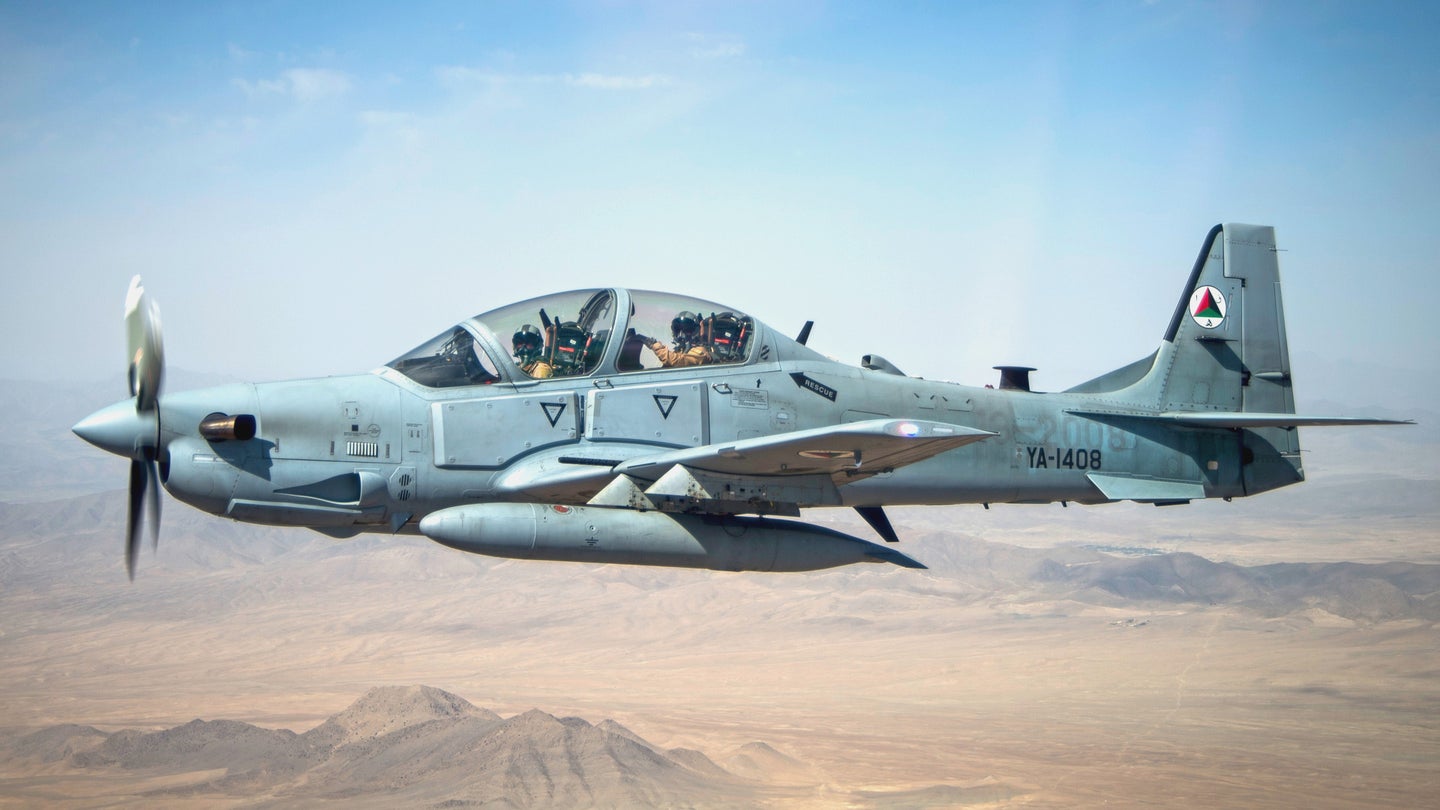 Details remain limited, but an Afghan Air Force A-29 Super Tucano light attack aircraft crashed earlier today, reportedly with a U.S. pilot on board. Reports also say this individual was injured after ejecting, but they have already been rescued. Their exact affiliation, such as whether they are a member of the U.S. military or a private contractor, is unclear as is whether there was also a member of the Afghan Air Force in the aircraft at the time of the accident.

The mishap, which was said to have been the result of a technical failure, occurred in the Doshi District of Afghanistan's northeastern Baghlan Province at approximately 11:30 AM local time on July 9, 2020. The A-29 was assigned to the Kabul Air Wing based at Hamid Karzai International Airport in the country's capital, Kabul. The single-engine turboprop Super Tucanos are Afghanistan's primary fixed-wing combat aircraft. They are armed with two .50 caliber machine guns and can carry various types of ordnance, including laser-guided bombs, on four hardpoints under the wings and another one under the center of the fuselage.

"The A-29 had an American onboard, unclear if flying the aircraft alone or with an Afghan, according to those familiar with the crash," New York Times reporter Thomas Gibbons-Neff wrote on Twitter.

An unconfirmed video has also appeared on Twitter showing Afghan Air Force Mi-17 Hip helicopters responding to the crash to rescue the pilot. There are also reports that the pilot ejected from the aircraft.

The Afghan Air Force presently has 25 A-29s, 10 of which are based in the United States as part of a pilot training program. The sustainment of Afghanistan's Super Tucano fleet, as well training of new pilots and maintenance personnel, rely heavily on contractor support.

"As a result, a new training contract was awarded in February 2020," it continued. "Training was set to begin in April but has been delayed due to COVID restrictions."

This could help explain why an American, who may have been a contractor, was flying in the aircraft at the time of the accident in Baghlan Province.

This incident comes just over six months after a highly specialized U.S. Air Force E-11A Battlefield Airborne Communications Node (BACN) aircraft crashed in Afghanistan's Ghazni Province, also in the northeastern portion of the country, killing the two pilots on board.

U.S. Forces-Afghanistan (USFOR-A) has confirmed that an American pilot was flying in the A-29 at the time of the crash and that they were an instructor pilot from the U.S. Air Force. The full statement that The War Zone received is as follows:

"An Afghan Air Force A-29 flown by a U.S. Air Force instructor pilot crashed during a training flight."

"The pilot ejected prior to the crash and was safely recovered. The cause is under investigation, however preliminary indications are the aircraft crashed due to mechanical issues."

The U.S. Air Force is in the process of winding down U.S.-based training for Afghan A-29 pilots, with the goal of having Afghan instructor pilots begin training their comrades in Afghanistan by the end of this year. "The first IQT [Initial Qualification Training] class conducted entirely outside the United States is projected to start by September 2020," according to the latest "Enhancing Security and Stability In Afghanistan" report.

"The Afghan A-29 schoolhouse is expected to be fully operational by April 2021 with a total of 25 in-country aircraft," that report continues. "A-29 advisors and contract instructor pilots are currently supplementing the organic instructor cadre to meet the current training needs."

The U.S. military did notably shut down a U.S.-based program to train Afghan pilots to fly the AC-208 Eliminator aircraft last year, after almost half of the students went absent without leave, or AWOL. Members of the A-29 program had gone AWOL in the past, as well.