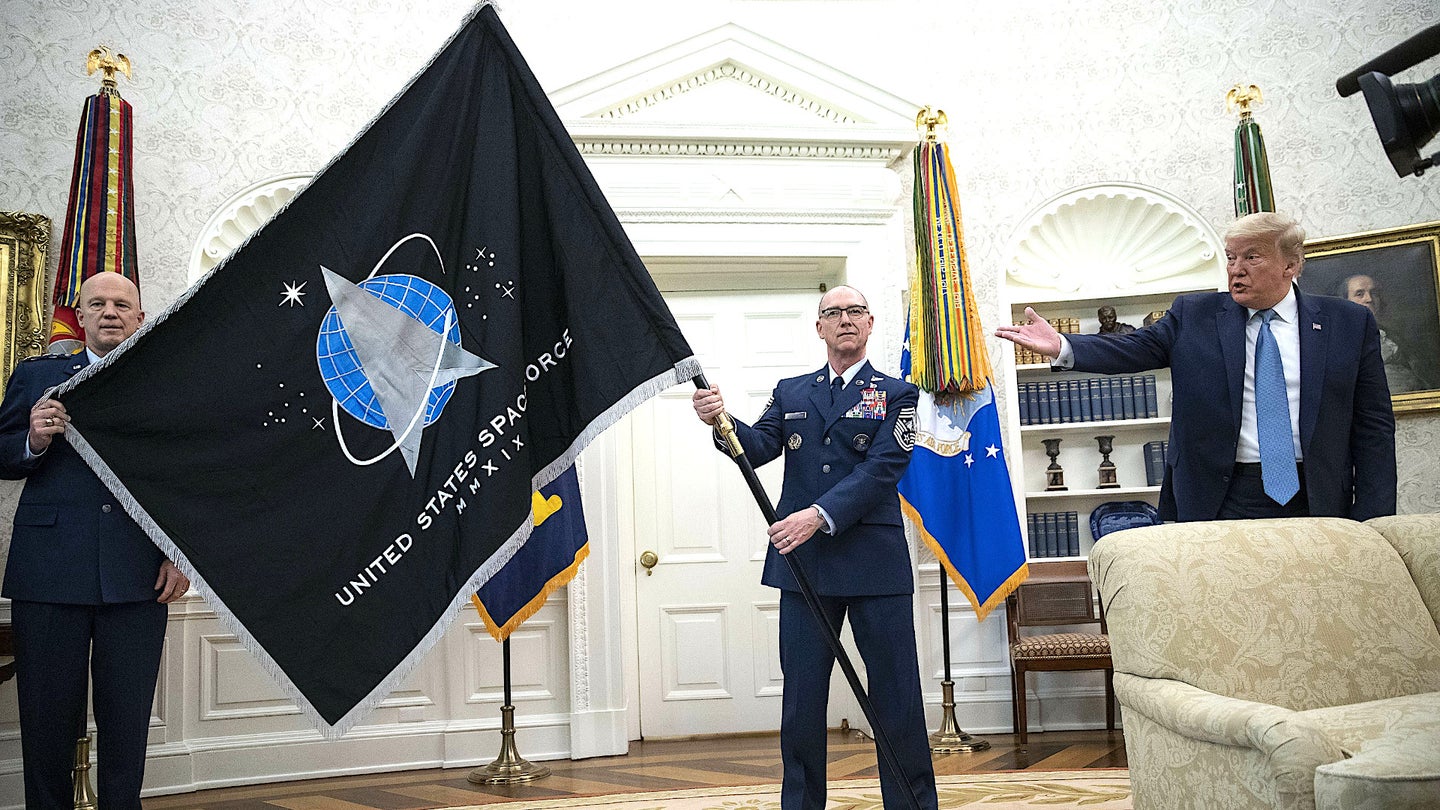 U.S. Space Force, America's newest military branch, is now just over six months old. Already, the fledgling service has been working hard to create its own distinct identity and esprit de corps, especially in relation to the U.S. Air Force, where most of its initial personnel and resources will come from. This has included the creation of new insignias, and flags emblazoned with them, and service-specific uniform items.

Just last week, the Space Force took another step forward in this regard when it offered the first concrete details about its new core organizational structure, which will have three main echelons of commands. At the top will be various field commands run by general officers, starting with Space Operations Command (SpOC), Space Systems Command (SSC), and Space Training and Readiness Command (STARCOM). At the lower level, there will be squadrons, just like in the Air Force. In between, in place of what the Air Force would call wings, Space Force will have newly named "deltas." However, that wasn't the only name the service considered.

"Deltas ... will be organized around a specific function – operations, installation support, training, etc," an official Space Force statement said. "Within the deltas will be squadrons focused on specific tactics."

Space Force says it named this new tier of units after "the triangular symbol often used in space logos," according to Air Force Magazine. This decision seemed somewhat curious given that it has no particular claim to the use of deltas as heraldic devices within the U.S. military, which are regularly found in Air Force insignias, as well. This is to say nothing of the name U.S. Army's extremely famous, if top-secret Delta Force.

Deltas are very common symbols, especially for space-related organizations, with the national space agencies of China, Russia, India, and Iran, among others, all using them in some fashion. Even NASA's present logo has a central delta motif.

The word "delta" is already used in and outside the U.S. military, as a whole, to refer to a wide variety of things, from statistical deltas to the word in the phonetic alphabet for the letter d, too.

With all this in mind, The War Zone reached out to the Space Force to try to get more information about the decision-making process, as well as what names it passed over in favor of deltas.

"The organizational structure is just one of many decisions that are being considered as part of the stand-up of the U.S. Space Force," Lynn Kirby, a Space Force spokesperson explained. "The planning is being done by military and civilian personnel assigned to the Department of the Air Force.

"Salaries are paid out of the Military Personnel account (active duty) and Operations and Maintenance account (civilian)," Kirby added when asked about how much it cost in time and resources for Space Force to settle on the name delta. "We do not track funding or manpower by task."

Kirby also provided a list of rejected names, which are as follows:

It's not difficult to understand how some of these got cut. Brigade and division are unit types better associated with ground-based units in the Army and U.S. Marine Corps. Fleet similarly already has a clear association with the U.S. Navy. Team is a term widely used for very small units within the U.S. military.

Some of these, such as Array and Port, are just bland.

But it is hard not to feel like Space Force missed out with some of these other options. For a service that will have a SpOC (Space Operations Command) – which will be pronounced "spock" like the name of the iconic character from the Star Trek universe, whether its officially sanctioned or not – and a STARCOM, it's unclear why the more obviously space-themed names got passed over.

There doesn't appear to be any particular reason for Space Force not to have picked some of the other options that might have seemed at least inspired by popular media, either. The Air Force already has things like Kessel Run and Kobayashi Maru, software incubators with official nicknames lifted wholesale from Star Wars and Star Trek, respectively.

When the Space Force revealed its own insignia in January, people immediately began talking about its similarities to the logo for Star Trek's fictional Starfleet, even though it was clearly repurposed from the one previously used for Air Force Space Command. With unit names like 1st Legion or 10th Vanguard, the service would certainly have set itself very clearly apart from its sister services.

Whatever the exact reasons why Space Force went with delta in the end, it still has important naming left to do. In February, it solicited suggestions from across the U.S. military for what to call personnel assigned to the service, just like the Air Force has airmen, the Army has soldiers, the Navy has sailors, and the Marines have, well, Marines. New names for ranks, including for officers at the O-6 grade – colonels in every service but the Navy and the Coast Guard, where they are called captains – who will command the deltas, are coming, too.

The Air Force notably did something similar to help pick the name for the future B-21 Raider stealth bomber. The author was among those responsible for prompting the release through the Freedom of Information Act of the full list of rejected names for that aircraft, which included submissions like Bomber McBombface and Chuck Norris.

It will certainly be interesting to see what Space Force ends up calling the personnel assigned to its deltas and other units. In Netflix's Space Force show, they're called spacemen.

We also now know what could have been when it comes to the name of the service's middle echelon units.

Be sure to let us know what you think of the decision to choose delta and what other terminology you think Space Force should adopt in the future in the comments below.

Carell and the showrunner of The Office have created a workplace comedy that may end up being a bit closer to reality than not.

No character delivers stunning moral clarity better than Jean-Luc Picard, which makes him more relevant now than ever before.