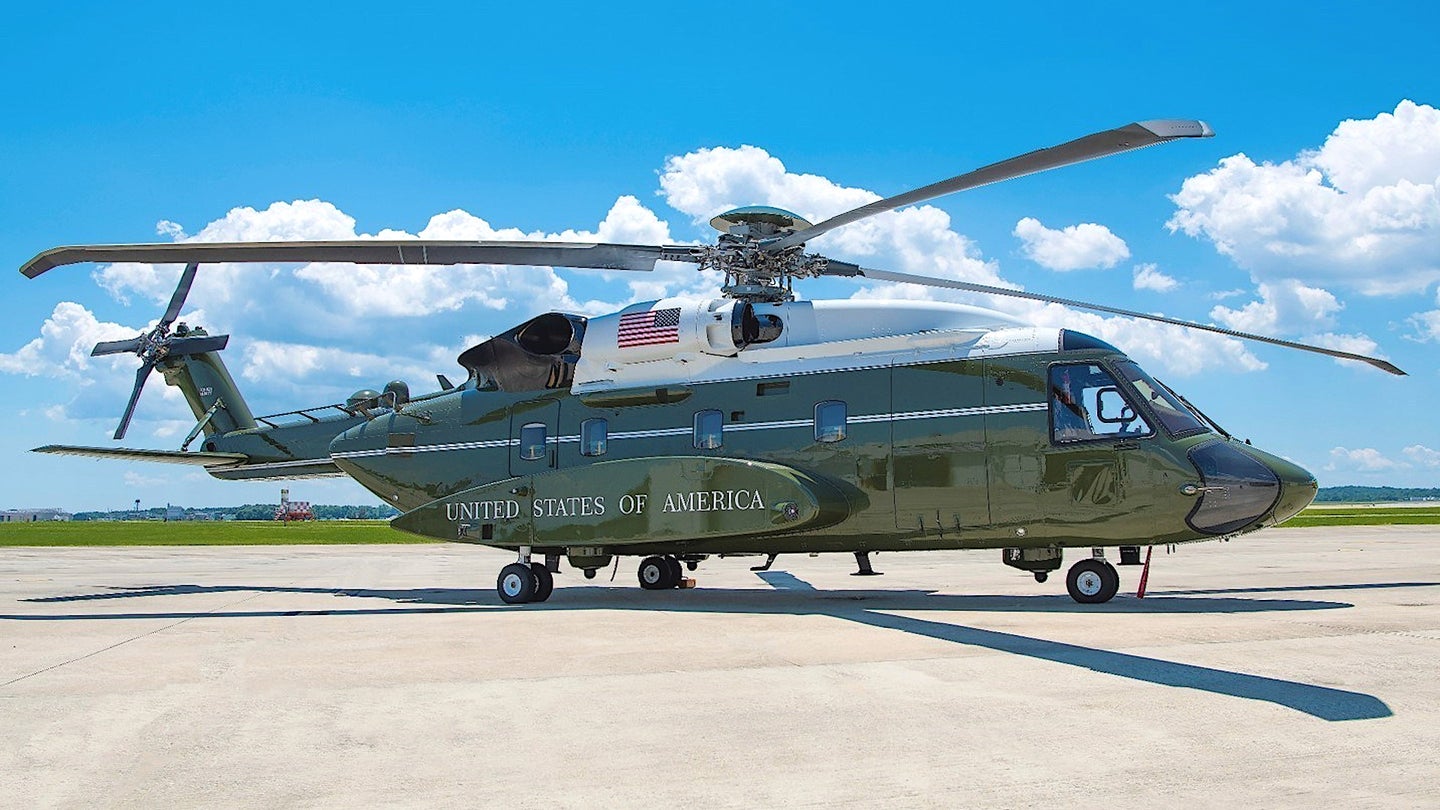 The U.S. Navy is considering buying five additional Sikorsky S-92 helicopters to complement a planned fleet of 23 VH-92As, which are set to become the newest "Marine Ones" responsible for shuttling the president, their family, and their closest advisors around at home and abroad. The extra helicopters, which the service is tentatively referring to as CH-92As, would have less extensive modifications and would be used for training duties and for less critical logistics missions, such as flying around the White House staff and the media pool. The U.S. Marine Corps squadron that flies the president around refers to aircraft that perform this role as 'green tops," while the Marine One helicopters are 'white tops.'

The House Armed Service's Committee Tactical Air and Land Forces Subcommittee highlighted the ongoing internal discussions about the potential purchase of the five CH-92As in a press release on June 22, 2020. The release was focused on the subcommittee's desired additions to the annual defense policy bill, or National Defense Authorization Act (NDAA), for the 2021 Fiscal Year. The members of the subcommittee are now looking to require the Navy to submit a full report on its requirement for these helicopters, including a cost/benefit analysis.

The Navy is managing the purchase of the 23 VH-92As, but all but two will go to Marine Helicopter Squadron One (HMX-1), which will use them to replace all of the existing VH-3D and VH-60N helicopters in its white top presidential airlift fleet. Naval Air Systems Command (NAVAIR) plans to retain the remaining pair for continued test and evaluation purposes.

"Helicopter pilots assigned to HMX-1 go through an extensive pilot conversion training syllabus prior to flying the Presidential missions. The committee recognizes that adding the CH-92A aircraft would enable pilots to maintain monthly and annual flight time minimums without impacting operational Presidential lift assets," the additions to the draft Fiscal Year 2021 NDAA says. "The committee also notes that newly assigned aircraft crew chiefs and maintenance personnel could start training on the CH-92A while awaiting their security clearances, a process that can take up to a year to complete."

At present, at least publicly, no other units within the U.S. military beyond HMX-1 and NAVAIR fly or expect to fly S-92 variants. In 2018, the Marine Corps' had planned to set aside four VH-92As for pilot and maintenance training. However, this would have limited the availability of those airframes, nearly a fifth of HMX-1's total fleet, for their primary mission.

In addition, as the Tactical Air and Land Forces Subcommittee noted, the exact specifics of the configuration of the VH-92As, which are designed to protect the nation's top executive and keep them in secure contact with other senior officials at all times, are highly classified. This means that incoming personnel need the right clearances and have to pass through the appropriate, but time-consuming vetting process to get them. Until then, they can't train on those helicopters. The security around the white tops is so tight that the helicopters are literally caged in their hangar apart from their green top stablemates when housed at HMX-1's base in Quantico, Virginia.

In its 2019 Aviation Plan, the Marine Corps said it wanted to acquire two CH-92As for HMX-1 for training purposes in 2023. That proposed fleet has now grown to five helicopters, according to the Committee Tactical Air and Land Forces Subcommittee, but it's not clear if the potential delivery schedule has changed.

At the same time, the mission sets that the Navy and Marines are considering for the CH-92As have also grown to include supporting the less critical logistics missions that HMX-1's green tops perform. The 'green side' of HMX-1, which presently has a dozen MV-22B Osprey tilt-rotors, is primarily responsible for moving around White House staff, members of the media, specialized quick reaction forces, Secret Service personnel, and other official guests, in support of presidential missions. It's also worth noting that the squadron, as a whole, also has an operational test and evaluation mission.

The green side's V-22B Osprey tilt-rotor cadre is held to different standards of training, readiness, and security. The Osprey offers impressive speed and range, especially compared to the existing VH-3Ds and VH-60Ns, which could be especially useful for responding on short notice to any sort of emergency. However, the MV-22Bs are also maintenance-intensive and costly to operate and offer capabilities that are not always required.

Beyond that, their powerful rotors place significant restrictions on where they can touch down during routine flight operations due to the risks the downwash poses to bystanders and nearby structures. The downward-blasting hot exhaust from the engines when they are rotated up at high angles can also damage the ground below.

These issues are very real. An Osprey demonstration on Memorial Day in 2010 in Clove Lakes Park on Staten Island in New York City notably sent tree branches flying and injured 10 spectators. The Marine Corps limited MV-22B operations in Nepal in the wake of a massive earthquake in 2015 for fear that the downwash could knock down damaged buildings.

There have also been concerns about the damage the downwash from the VH-92A's rotor might do to the ground below, especially when it has to land inside the White House grounds, but it is far less of an issue than with the MV-22B and there has been work done already to mitigate its impact. Regardless, it's not hard to see how the CH-92As could provide useful support when there isn't a need for the MV-22Bs.

The helicopters could provide a more direct replacement for the green top CH-46 Sea Knights, which HMX-1 retired after the Ospreys arrived. There was the possibility in the past that the squadron might recieve CH-53K King Stallions to replace the CH-53D and E models it had operated over the years, but there are no plans to do so at present. The CH-53K program has long been beset by technical difficulties and delays, which has caused the unit price of those helicopters to grow, all of which you can read about more in this past War Zone piece.

A purchase of CH-92As for HMX-1 could also raise the possibility of the Navy acquiring more S-92s for other purposes. Other units within the U.S. military, might also have an interest in buying them, as well.

Of course, the Navy has not yet made a firm decision on whether to buy the five CH-92As for HMX-1. It will also have to get Congress to approve the funds for the purchases, if it decides to go that route. The proposed additions to the Fiscal Year 2021 NDAA from the Tactical Air and Land Forces Subcommittee makes clear that at least some legislators want more information before they sign off any such plan.

"The committee expects this report to provide a cost/benefit analysis of acquiring CH-92A aircraft and an assessment of the risk that potential industrial base changes, including a manufacturing facility closure, would pose to the ability to meet a validated trainer aircraft requirement," the section on the CH-92A in the draft NDAA states. "The National Defense Authorization Act for Fiscal Year 2020 (Public Law 116-92) directed an assessment of risks to the VH-92A industrial base, but the response received from the Secretary of the Navy provided none of the requested information or analysis."

The Marines expect HMX-1 to reach initial operational capability with the VH-92A this year and hope to have received the total fleet of helicopters by 2023. If plans to acquire a CH-92A fleet move ahead, the squadron could begin operating those helicopters in the same general time frame.