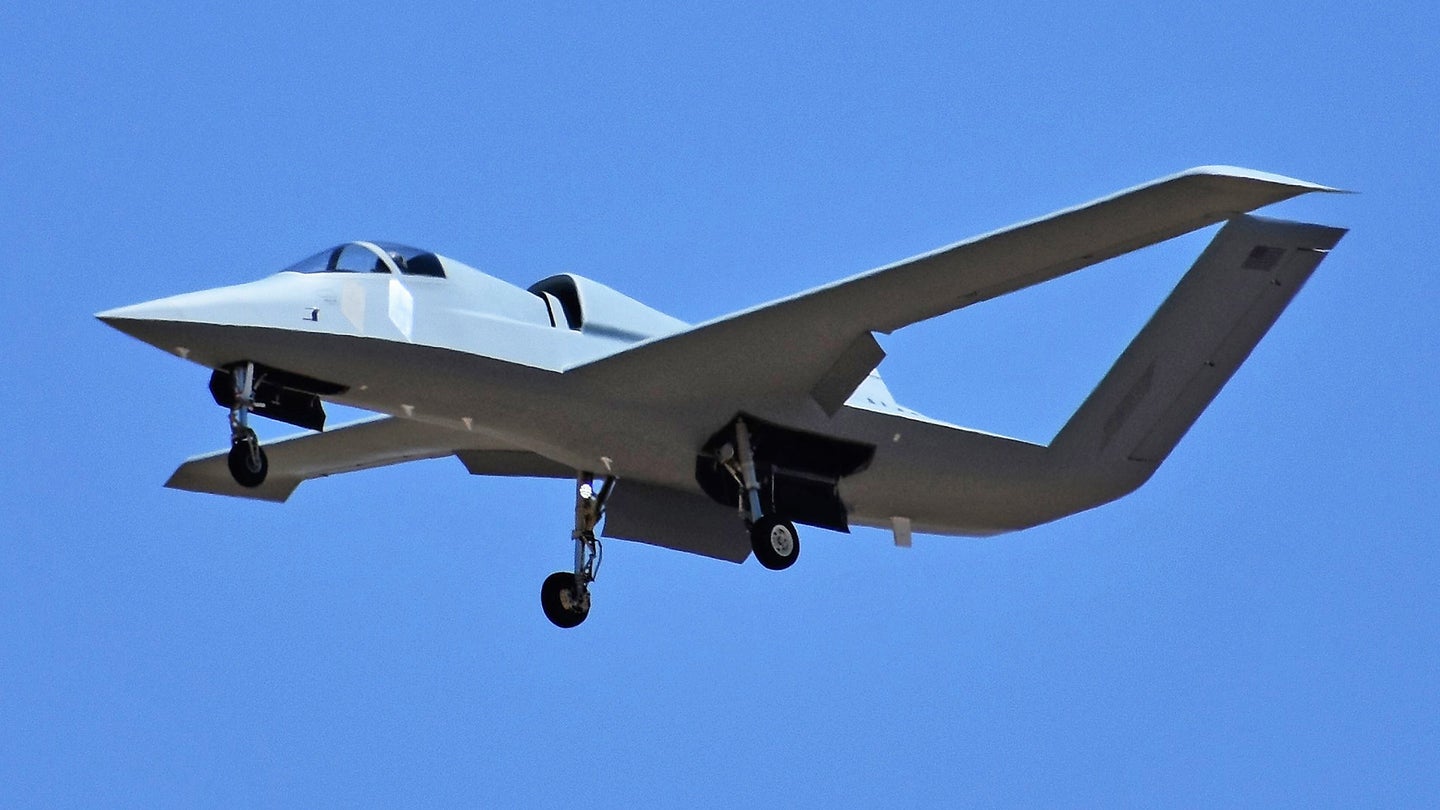 Last week The War Zone reported on intriguing tests involving Scaled Composites' high-flying Proteus test platform and the company's two Model 401 'Son Of Ares' stealthy jet demonstrators, which still largely remain a mystery. We can now say that these missions have not only continued, they have expanded to include new aircraft types.

Make sure to read our previous piece on these peculiar operations linked here in order to get up to speed and for full context.

Author's Update: We have new images of one of the Model 401s and they are bizarre, to say the least. Check out our new story here after finishing this one.

This week, the trio of highly experimental aircraft were airborne once again over and near the Navy's massive Naval Air Weapons Station China Lake range complex in the Mojave Desert. Proteus and one of the Model 401s sortied from Scaled Composite's home base at Mojave Air and Space Port, while the other Model 401 flew out of China Lake, just like last time. But this time around they were joined by another player, a NASA F-15D Eagle carrying a large pod.

The appearance of a NASA F-15 for the tests is interesting. Nearby Armstrong Flight Research Center supports development and flight test work that have both civilian and military applications. Considering the exotic podded payloads Proteus often lugs around, which range between NASA scientific instruments to advanced military sensors, its involvement isn't too puzzling. Our photo contributor Christopher McGreevy found himself under the flight path of the F-15D and the Model 401 and captured a couple of photos of the formation:

According to local observers and plane trackers, the Model 401s flew together at times and separate at others and a KC-10 was present to provide fuel for the NASA F-15D as the tests wore on. Proteus was also close by at a similar altitude, around 25,000 feet, as the Model 401s, flying its large racetrack-like patterns oftentimes to the west of the action

This photo was not taken on this mission, but it serves as an example of the exotic test pods NASA F-15s carry from time-to-tome:

Hans Friedel was near Mojave as this was going on and snapped some photos of one of the Model 401s and Proteus as they recovered at Mojave Air and Space Port. This is our first good look at N401XP in its configuration for these tests. Note that the aircraft wears a new overall gray coating and there are large discolored diamond-like shapes below the cockpit and on its lower tail section. It is unclear what exactly these patches are for, but it seems like the Model 401s may be participating in a test that at least has something to do with their signatures, which can include radar, electronic, infrared, and visual.

We also get a look at the other side of the pod Proteus is carrying, which appears to have some sort of electro-optical system installed. It's not clear if there is also a radar or some emitter situated in between, as well. If so, this would certainly help slew the optical systems on to their targets. With two apertures seen, it may make sense why two model 401s are participating in the test. The configuration would also point to why the planes are flying largely on the same plane as the cameras, if they are cameras, as they would have a limited ability to pan and tilt in this flush-mounted configuration. Still, we don't know for sure what the payload is or its utility for certain, so take all this with a grain of salt.

The odd surface treatment on the Model 401 may also point to some sort of a coating test, maybe one that works to reduce the infrared signature of the aircraft, which is becoming more and more important as infrared search and track (IRST) systems are increasing in their capabilities and pose a real threat to stealthy aircraft. In addition, a significant portion of air-to-air missile capabilities also relies on imaging infrared homing. But reductions in infrared signature alone may not be the extent of the tests. The Pentagon has long been interested in visual signature reduction. You can read all about the long developmental past of aerial 'cloaking' technologies and where such a capability may be at today in this past feature of ours. It's also worth noting that past technology demonstrator aircraft, such as Boeing's Bird Of Prey, existed partially to test visual signature reduction measures.

Once again, these are just some thoughts based on the information we have at hand. Those areas on the Model 401's skin could be conformal antennas or even calibration and tracking marks to aid an optical tracking system that is being tested. As such, the Model 401s could be providing lower observable targets for challenging that system, nothing more. We just don't know.

There has been much speculation that these aircraft could be manned or optionally manned demonstrators to prove unmanned technologies, such as the loyal wingman concept of operations and more. Like many other Scaled Composites other designs, their actual reason for being may be multi-fold or will shift over time.

Hanz also pointed out to us that the Model 401 sounds remarkably strange when landing and he even connected it to a video of an RQ-170 Sentinel landing at Creech Air Force Base some time ago that we have discussed here on The War Zone in the past. Check out the two videos below:

It is not clear if the similarities are due to a common powerplant or the odd inlet designs on both aircraft, or even a combination of both, but it is interesting none the less.

So, that is where it sits now. There has been no action with the Model 401s today as far as we can tell, although Raytheon's 'Voodoo 1' 727 sensor test jet has been flying over the same area that Proteus was yesterday. It isn't clear if any of this is tied to the ongoing testing in question. Regardless, it seems clear that whatever program is underway involving these little stealthy jets it is a complex one that requires a large variety of assets and multiple test flights.

With that in mind, we probably will be seeing a lot more of the Model 401s and their friends in the days to come.