The carrier just left on a cruise and it’s packing a new electro-optical and infrared sensor system that will enhance its situational awareness. 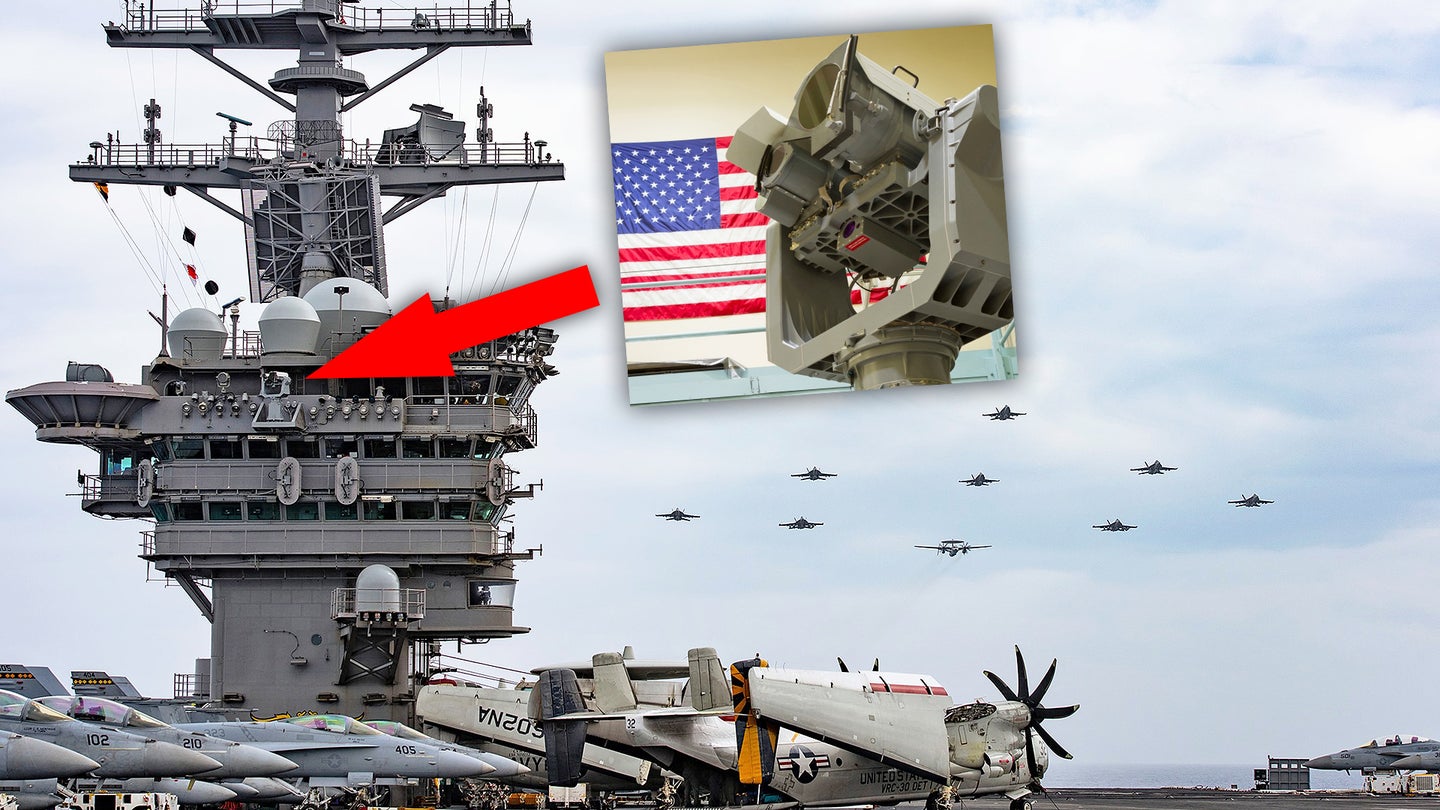 The supercarrier USS Nimitz (CVN-68), now America's oldest operational aircraft carrier, just got an upgrade before she left port in Washington State to head to the waters off the Southern California coast to participate alongside her strike group in the most complex training her crew will take part in before deploying to the increasingly turbulent Pacific. The enhancement in question is a very high-power stand-alone electro-optical and infrared imaging system that has been mounted on the forward part of her island superstructure. The modification appears to be totally unique to Nimitz at this time.

The system itself appears to be the Mk 6 Mod 4 Stalker Long-Range Electro-Optical Infrared Laser Sensor System (SLREOSS) built by Ball. The system uses an HD electro-optical (EO) camera system and a medium-wavelength infrared (MWIR) camera paired with a laser rangefinder, all of which are very high-power and can peer over great distances with fully stabilized accuracy and tracking. This standalone mounted system is derived from the one Ball builds for the Mk 95 Sea Sparrow radar director systems found on some U.S. Navy big deck amphibious assault ships and aircraft carriers, as well as some allied NATO ships.

The Mk 95 directors are used to provide radar illumination for the RIM-7 Sea Sparrow and RIM-162 Evolved Sea Sparrow (ESSM). The latest ESSM Block II does not rely on external radar directors, but it hasn't found its way on America's supercarriers due to weight compatibility issues with the existing Mk 29 armored box launchers on these ships. Regardless, some of the Mk 95s, which are stabilized radar tracking platforms in their own right, have been equipped with telephoto video camera systems for years.

The Stalker system goes beyond that basic capability, incorporating both EO and IR sensors, along with laser rangefinding, which can be highly effective at positively identifying and prioritizing incoming threats the ship chooses to engage. In addition, it can be invaluable in deciding if follow-on salvos of missiles need to be launched at a target. This is highly important considering only eight missiles are carried in each Mk 29 armored box launcher.

A few of America's carriers' Mk 95s already have the Stalker system installed atop their turrets. Those that do, only appear to have them on their two primary directors mounted centrally on the island superstructure. So, even if they do have a version of the system on the directors themselves, having one that can work independently of those critical self-defense systems would be a hugely useful for identifying threats around the ship, both in the air and on the surface, and also for navigation and man-overboard operations.

The first Arleigh Burke class destroyer was delivered with a similar system that was primarily intended to assist in employing the ship's five-inch gun. It turned out to be one of the class's most useful, albeit obscure tools, performing many other tasks, as well. Eventually, increasingly capable versions of that system were installed on newer destroyers and it has since been retrofitted to many of America's remaining Ticonderoga class cruisers. That system is the Mark 20 electro-optical sensor system (EOSS). You can learn all about this system, and in doing so, gain valuable insights into the Stalker system that is quite similar to it, in this past article of ours.

A supercarrier's Mk 15 Phalanx close-in weapon system (CIWS) mounts also have telephoto and infrared cameras, as do the Mk 38 25mm chain gun weapon systems. But adding a far more powerful system like Stalker that can operate independently of any weapon system and is mounted high atop the island would provide exceptional line of sight and high situational awareness as to what is going on around the ship at any given time. Considering its Sea Sparrow director roots, it is likely tied into the ship's other sensor systems, especially radar, so it could be able to be cued at targets of interest that are first spotted using those sensors.

The inner sanctum around a carrier, while it is underway in the littorals, is where it is most vulnerable, as we have seen time and time again. So, being able to visually identify threats and monitor them as far away as possible is a huge deal. This includes those flying through the air, not just skimming along the water's surface. This stand-alone Stalker system should help in those efforts significantly.

Nimitz just departed on her operational cruise. It is nice to know that her crew has a new capability discreetly assigned to keeping watch over their home away from home as it sails into less than friendly waters.

It’s easy to overlook the WALL-E-looking turret atop these ships, but it provides key targeting and situational awareness information to the crew.