Does This Image Show The Colorado Mystery Drone Swarm? (UPDATE: It Doesn’t)

The image, obtained from the FAA, supposedly shows a formation of craft above Nebraska, but it actually does not. 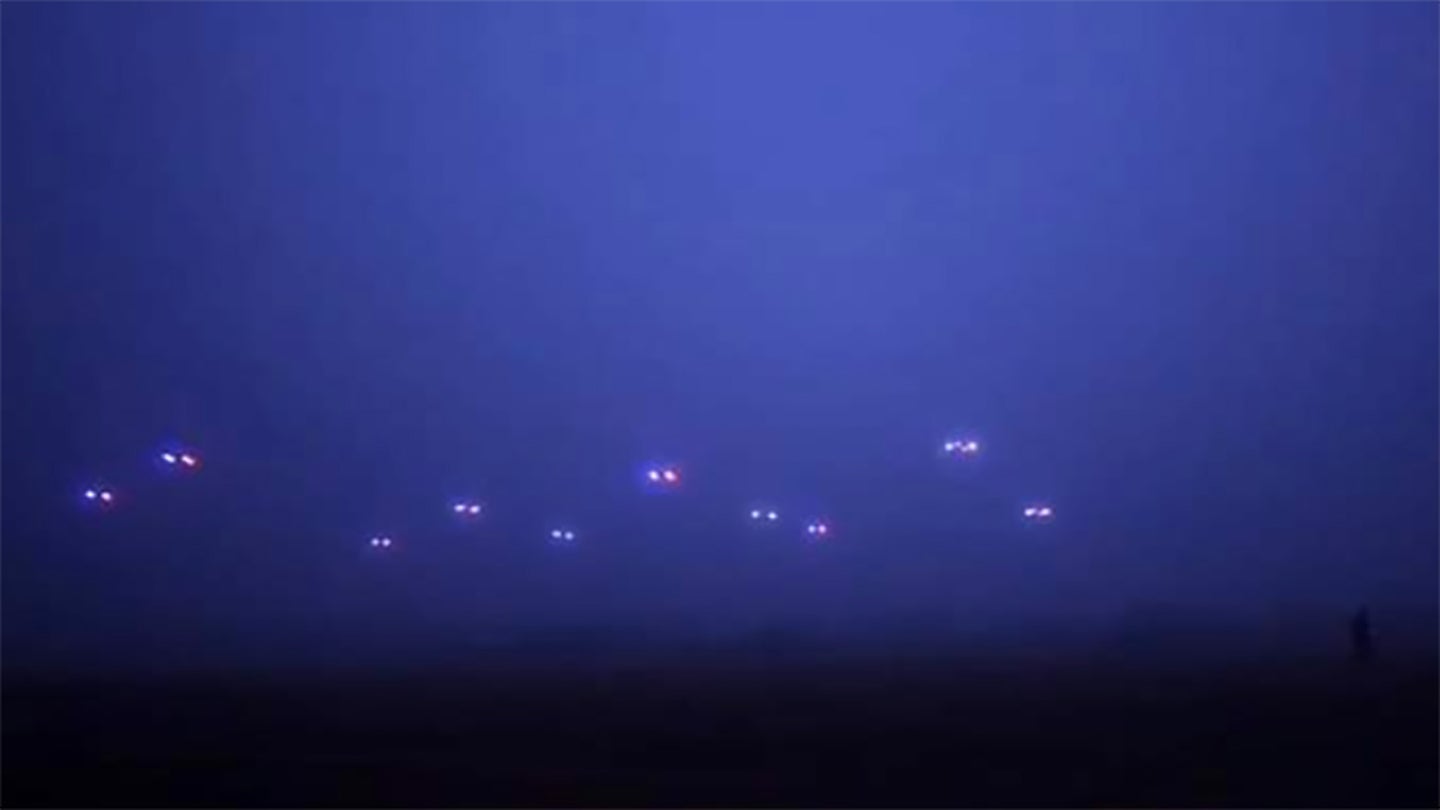 One of the most bizarre aerospace-related stories in recent memory was the saga of the unidentified drones that were reportedly seen throughout eastern Colorado and western Nebraska. Numerous reports were filed with various local, state, and federal law enforcement agencies, and a joint task force was eventually formed to investigate the phenomenon. Despite the attention the alleged mystery drones received, the case has largely faded out of the public eye, likely due to the lack of either answers or definitive evidence related to the drones’ origins.

Editor's Note: We asked our readers to help us investigate this image for a good reason. One of our esteemed commenters @Orb, found the photo using a reverse image search tool called Yandex. It appears to have emanated from a coordinated drone demonstration in this video. So we can safely say that the image included in the FOIA documents is not of the Colorado incidents.

The War Zone and Douglas D. Johnson of the Scientific Coalition for UAP Studies are still filing records requests at the federal and state level in relation to the apparent drone mystery and information is now starting to trickle in. As part of those requests, Johnson recently received a single email from the FAA that may contain the best image of the mystery drones we have seen, if that is indeed what the photograph shows.

The War Zone was among the first outlets to report on the bizarre saga of the mystery drones being reported in the skies above Colorado and Nebraska. Reports of the drones first appeared in December 2019 and sightings continued into the first few months of 2020. Public concern grew so large that the FAA along with federal, state, and local law enforcement agencies formed a task force that included a PC-12 surveillance aircraft operated by the Colorado Division of Fire Prevention and Control. The War Zone is still actively pursuing Colorado state records in relation to that aircraft and its use to hunt for the drones, although those requests have faced significant delays due to disruptions stemming from the coronavirus pandemic.

Public interest in the alleged drones seems to have died down and there is some speculation that a portion of these sightings could have been of misidentified satellites or conventional aircraft, which is far from implausible. Still, many of the sightings and accounts of drones have been made by trained personnel including law enforcement officers and the similarities among the most credible reports do suggest that formations of small unmanned aircraft have indeed been spotted flying around the region at low-level.

There was also rampant speculation that the drones were somehow related to or operated by nearby military installations including F.E. Warren Air Force Base. Emails obtained by Douglas D. Johnson of the SCU show that there was confusion and concern about the drones among personnel at the base and do not provide any conclusions that explain away the mystery. Nearly all the images in the documentation from F.E. Warren Air Force Base were strangely redacted, as well.

So, as it sits now, the strangest part of this bizarre saga is the lack of a resolution. No conclusive answers or pieces of evidence have been provided about the identity of the alleged drones, their operators, or how so many people, including reliable observers, were mistaken and by what. However, the addition of this latest image, obtained through the Freedom Of Information Act, could lend credence to the existence of the unidentified drone swarms.

The image Douglas Johnson obtained appears to show a formation of ten pairs of lights in the twilight or early morning sky, possibly belonging to the craft. Another object can be seen in the lower-right portion of the image which may be an individual’s silhouette, although the low resolution and the lighting conditions make it difficult to tell what exactly can be seen in the foreground in the photograph, but the lights of the airborne formation are distinct.

In the initial coverage of the unidentified drones in December 2019, The Denver Post reported that eyewitnesses described small aircraft featuring red, white, and blue lights. In the image included in the FAA email, some of the lights appear to be blue and red.

The photograph was included in an email exchange between Ian Gregror, Communications Manager for the FAA Pacific Division, and Rick Breitenfeldt, a public affairs officer at the William J. Hughes Technical Center housed at the Atlantic City International Airport. From the email, it appears that the photograph was taken by a friend of Breitenfeldt’s brother-in-law who lives in central Nebraska. There is no other information in the emails, although Gregor did state that he wanted to pass the image on to local law enforcement agencies, presumably in Nebraska.

It’s still unclear what the photograph shows, although if confirmed to actually be a swarm of unmanned aerial vehicles, it would certainly support many of the eyewitness reports of formations of drones moving through the skies above Colorado and Nebraska. It's also entirely possible that it could be from some other source material unrelated to the Colorado drone scare, but the fact that the FAA official passed it along with a personal reference is significant evidence that would seem to point to the contrary.

We invite our readers to help with this investigation. Does this image look familiar? Let us know in the comments below or via email.

We will continue to investigate the rash of reports of unidentified drones over the Central United States last winter and will have future updates as more information surfaces and our records requests are fulfilled.

Thanks once again to Douglas D. Johnson and the Scientific Coalition for UAP Studies (SCU) for providing The War Zone with these documents.