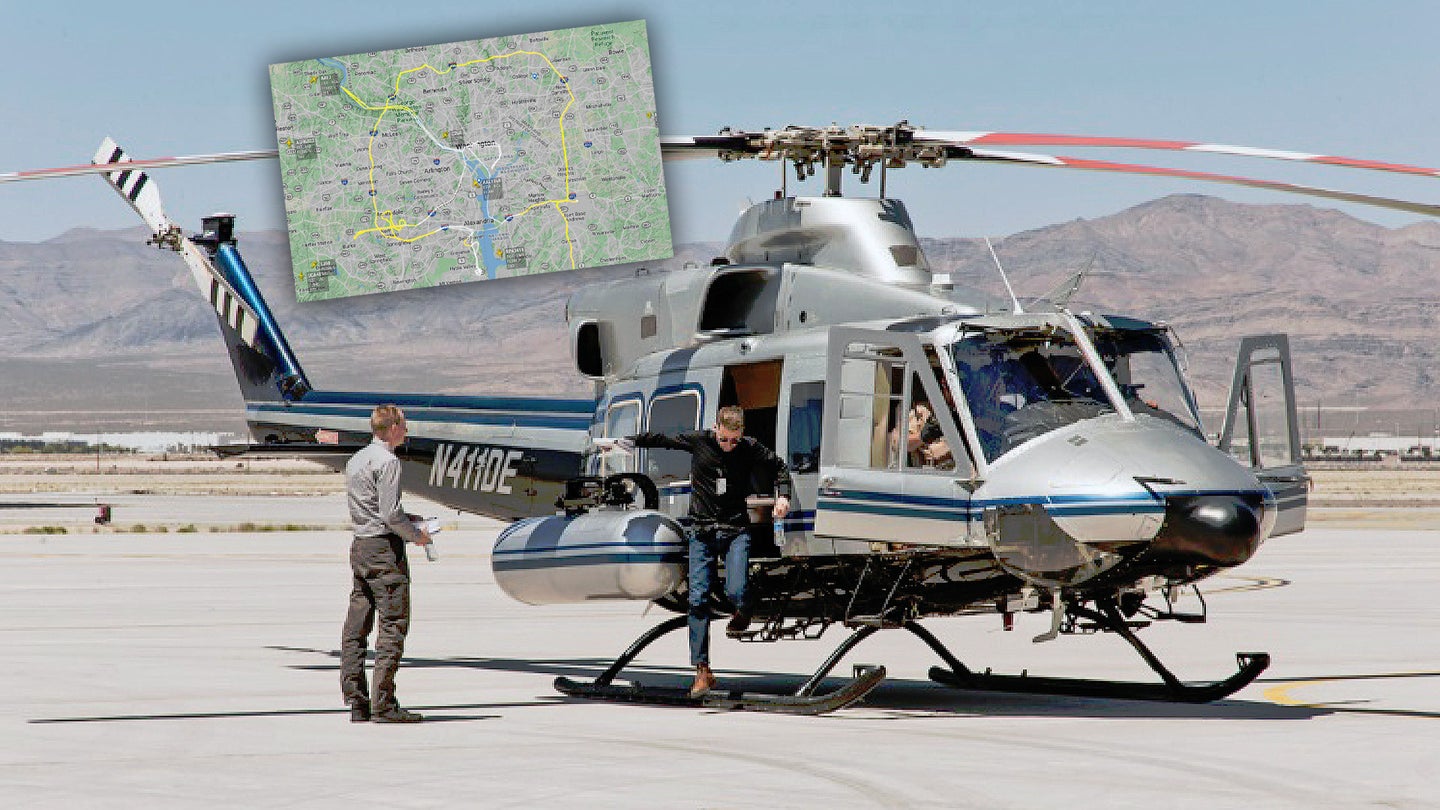 Reports of curious aerial activity over and around Washington, D.C. continue to emerge amid the response in the nation's capital to protests and riots stemming from the police killing of Minneapolis resident George Floyd last week. Earlier today, a Department of Energy helicopter equipped with a specialized system to measure and map radiation levels flew a route around the greater D.C. area. It's unclear if this flight was somehow related to the ongoing protests or if it was just a routine survey.

The helicopter in question, a Bell 412 that carries the civil registration number N411DE, is one of two that are part of the Aerial Measuring System (AMS), which also includes a number of specially configured Beachcraft King Air fixed-wing aircraft. The National Nuclear Security Agency (NNSA), the division of the Department of Energy responsible for overseeing the development and production of nuclear weapons, manages the AMS program through its Remote Sensing Laboratory. Elements of the AMS are based at Joint Base Andrews just outside Washington, D.C. and at Nellis Air Force Base near Las Vegas, Nevada.

The King Airs have sensors and other equipment to detect and geolocate radioactive hotspots on the ground and gather certain data about that radiation. The Bell 412s, flying at much lower levels, are employed to conduct more detailed surveys to fully map out the spread of radiation down below. Both components generate data in near real-time, while also collecting information that scientists on the ground can further analyze after the mission is complete. You can read more about the AMS in this past War Zone piece.

The complete system's primary job is to figure out the extent and severity of the spread of radiation after some sort of nuclear or radiological incident. This could be something like radiation leaks from a nuclear power plant or waste disposal facility following a natural or man-made disaster. It could also be the spread of radiation from a terrorist attack involving a dirty bomb or an accident involving an actual nuclear weapon.

There's been no such incident in Washington, D.C., but NNSA does send the AMS-equipped helicopters to conduct mapping surveys of background radiation ahead of significant public events, such as presidential visits or Super Bowls. The helicopters then fly additional patrols of the area afterward to monitor for any concerning changes.

"We deploy the helicopter right as a security bubble is being established around a major public event," Jay Tilden, NNSA's Associate Administrator for Counterterrorism and Counterproliferation, told Defense News last year. "Oftentimes in a city, you'll find a hospital or a cancer treatment center, and so that will pop up depending on the location of the source and what it's in [and] that will show [in the mapped data] and it will allow then the local and/or the federal officials to determine that it, in fact, should be there."

A dirty bomb could be especially devastating if detonated in the midst of a large public gathering, such as a massive protest. Mass panic from such an attack could also lead to significant casualties simply from people fleeing the epicenter. The appearance of the Department of Energy Bell 412 over Washington, D.C. came after President Donald Trump announced new increased security measures to stem protests and rioting in the capital. This is exactly the kind of decision that could result in a "security bubble" getting established, which might then prompt NNSA to conduct an AMS survey mission as Associated Administrator Tilden had explained.

It's also possible that this flight is unrelated in any way to current events. NNSA does deploy AMS-equipped helicopters and aircraft to conduct routine radiation surveys to collect baseline data in major cities. As with surveys conducted in relation to public events, this provides a picture of what the normal, naturally-occurring radiation levels look like across a certain area to help identify worrisome abnormalities in the future. The Department of Energy has conducted at least one such survey of Washington, D.C., in 2013.

There is also a possibility, albeit much less likely, that the Bell 412 is collecting information about some other form of environmental contamination. However, the Environmental Protection Agency (EPA), in talking about its Airborne Spectral Photometric Environmental Collection Technology (ASPECT) surveillance aircraft, which does have the ability to detect various pollutants from the air, specifically notes that AMS "only collects radiological data in real-time, while ASPECT provides a multi-sensor capability." You can read more about ASPECT in this past War Zone piece.

The War Zone has already reached out to the Department of Energy for clarification and information about the AMS-equipped helicopter's recent flight around the nation's capital. We will be sure to update this piece when we receive any additional details.

The NNSA public affairs office has responded to our queries and says that the flight by N411DE around Washington, D.C. yesterday was a routine flight following maintenance on the helicopter. The full statement is provided below:

"NNSA’s Nuclear Emergency Support Team (NEST) rotary-wing aircraft conducted a routine proficiency flight on Tuesday in the airspace above Washington, D.C.  The flight was an operational check after completion of a routine maintenance inspection and was in no way related to the federal government’s response to the civil unrest in the District."