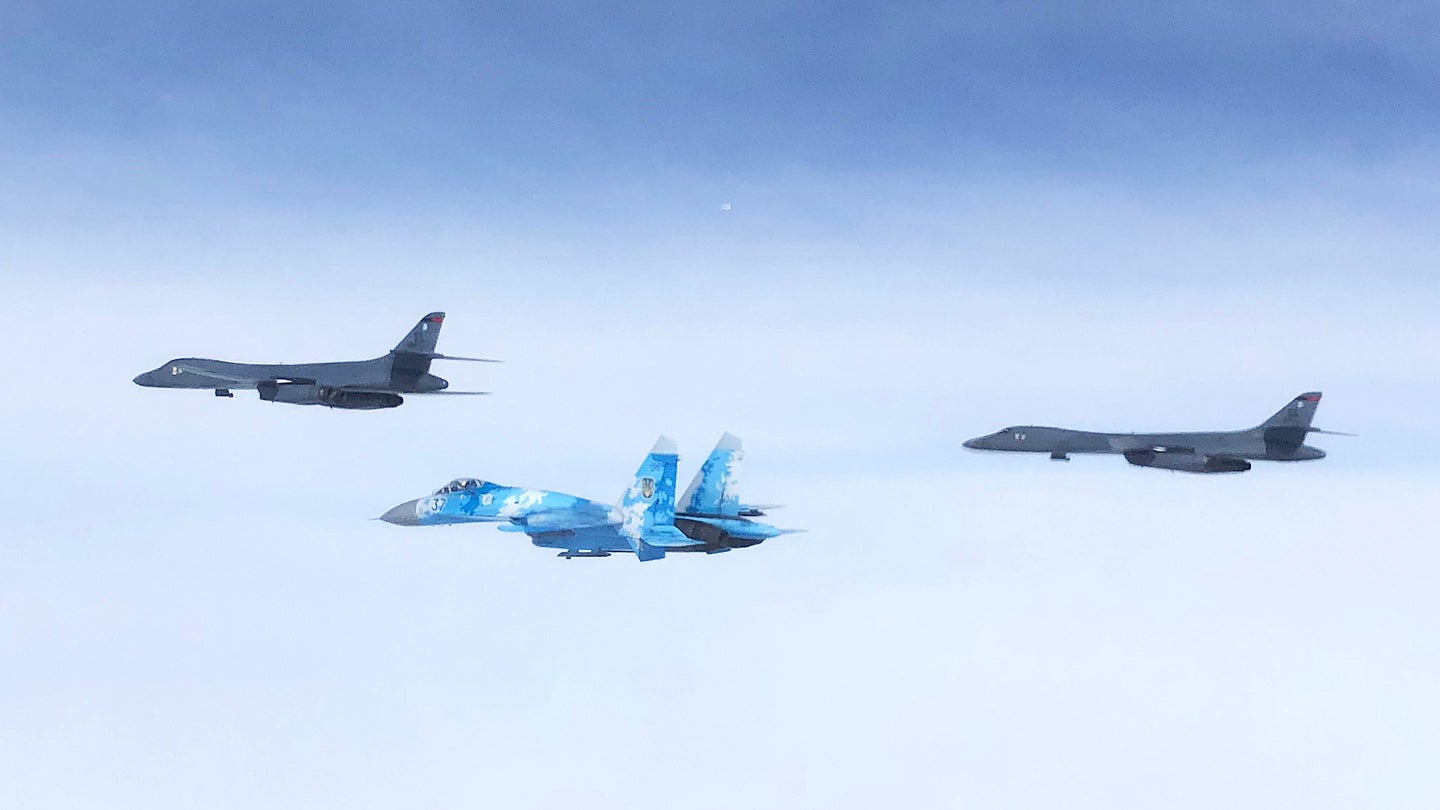 The U.S. Air Force says that the B-1B Bones that flew to and from the Black Sea region last week practiced procedures for employing the AGM-158C Long-Range Anti-Ship Missile, or LRASM, during that training mission. The service has focused heavily on the future employment of these bombers against maritime threats as they enter the twilight of their career, but with a heavy emphasis on operations during a potential crisis in the Pacific. This flight shows that there is interest in how those capabilities might support contingencies in Europe, and in the Black Sea where they could present a particularly serious challenge to the Russian Navy, and the Kremlin is taking notice.

The two B-1Bs from the 28th Bomb Wing at Ellsworth Air Force Base in South Dakota flew the long-range Bomber Task Force Mission on May 29, 2020, and worked with a variety of aircraft from NATO allies and other European partners, which you can read more in The War Zone's initial reporting on this training flight. This included flying with Ukrainian Su-27 Flanker and MiG-29 Fulcrum fighter jets and taking on fuel from a Turkish KC-135R tanker, a first for the Air Force's Bone fleet in both cases. U.S. Air Forces in Europe (USAFE) revealed the anti-ship component of the mission on June 1, 2020, though it's not clear if either of the aircraft were actually carrying any LRASMs.

B-1B bombers have been flying similar training missions on a routine, if irregular basis in the Pacific and Europe since the Air Force abruptly ended its Continuous Bomber Presence mission at Andersen Air Force Base on Guam in April 2020, which The War Zone was first to report. This brought an end to some 16 years of regular, six-month-long deployments of B-1Bs, as well as B-52s, to Andersen. In its place, the Air Force has adopted a policy of Dynamic Force Employment, a concept gaining traction throughout the U.S. military, which involves unannounced, shorter-duration deployments that are intended to keep potential adversaries on edge and add greater uncertainty and risk into their operational planning processes.

America's strategic bomber fleets already offer immense flexibility and are set to gain the ability to employ a wide array of new weapons in the coming years, including hypersonic missiles, that will further expand their stand-off strike capabilities. The B-1Bs have been getting a particular amount of attention in this regard, with plans to explore possibly expanding the total number of weapons they can carry by using external pylons, which you can read about more in this past War Zone piece.  At the same time, there has also been a revival of interest in recent years in employing bombers, and Bones armed with LRASMs especially, to support maritime operations.

"LRASM plays a critical role in ensuring U.S. naval access to operate in both open-ocean and littoral environments due to its enhanced ability to discriminate between targets from long-range," Air Force Lieutenant Colonel Timothy Albrecht, a member of USAFE's 603rd Air Operations Center and the Bomber Task Force mission planner, said with regards to the May 29 flight to the Black Sea. "With the increase of maritime threats and their improvement of anti-access/area-denial environmental weapons, this stealthy anti-ship cruise missile provides reduced risk to strike assets by penetrating and defeating sophisticated enemy air-defense systems."

The B-1Bs have been certified to carry AGM-158Cs in their internal bays since December 2018. The LRASM is derived from the AGM-158 Joint Air-to-Surface Standoff Missile (JASSM) family of air-launched land-attack cruise missiles, which these bombers can also employ. Just last month, the Air Force released pictures of personnel on Guam loading live JASSMs onto a B-1B during a short-duration deployment of the bombers to that strategic U.S. territory in a clear signal to America's opponents in the region, primarily China.

The Air Force's announcement regarding the anti-ship dimension to the Bomber Task Force flight is similar messaging clearly meant for Russia and its Black Sea Fleet. The Black Sea would likely turn into anti-ship missile shooting gallery all around during a major conflict, but Russia's Navy has certain advantages to start with. The only way in and out of the body of water is via the Bosporus and the Dardanelles, straits that Turkey controls. Under the Montreux Convention, countries that do not have a Black Sea border cannot keep vessels there for more than 21 days at a time or even sail warships above a certain total tonnage in or out at all.

In addition, sending the B-1Bs to the Black Sea region at all, and having them train with Ukrainian aircraft, was an obvious signal to begin with. In 2014, the Kremlin illegally seized Ukraine's Crimean Peninsula, which juts out into the Black Sea, and the naval base there, and subsequently began actively supporting separatists in that country's eastern Donbass region. The Russian military has steadily increased its military presence in Crimea, including the deployment of combat aircraft, long-range surface-to-air missile systems, and anti-ship missile batteries. Russian Flanker fighter jets based in the region flew out to intercept the Bones during their May 29 mission.

With all this in mind, shore-based anti-ship defenses in allied and partner states in the region, such as NATO allies Romania – which also sent aircraft to take part in the May 29 Bomber Task Force mission – and Bulgaria, as well as air-launched anti-ship weapons could be especially critical in any maritime engagement. A single B-1B can carry 24 JASSMs and is likely able to carry a similar load of LRASMs. There are only a little over 50 surface ships and a half dozen submarines assigned to the Russian Navy's Black Sea Fleet. A relatively small flight of Bones could realistically try to engage all of them with multiple missiles in a relatively short period of time.

The ability of B-1Bs to fly in from bases far outside the region to launch stand-off anti-ship attacks from outside the range of Russia's extremely dense integrated air defense bubble in the Black Sea area could be very valuable. Being able to fly from the United States proper to carry out these operations would also avoid the need to use bases in Europe that could be vulnerable to strikes themselves.

The LRASM itself is designed to navigate autonomously around the threats, including at times when its GPS-assisted guidance system and two-way data links might be jammed, and otherwise use its stealthy features to dodge enemy defenses. It also uses an imaging infrared seeker in the terminal stage of flight, which is also not susceptible to electronic warfare jamming. You can read more about this missile and its advanced features here.

It's not surprising, given all this, that Russia has taken notice of the increasing number of American bomber sorties. In a briefing on June 1, the Russian Ministry of Defense decried the U.S. aerial activity, as well as other NATO exercises, as provocative, focusing heavily on an air-and-sea exercise the Alliance held on the Barents Sea in early May. "For the first time since the end of the Cold War on the eve of celebrating the 75th anniversary of Victory over Nazi Germany a task force of warships of the NATO joint naval forces held drills in the Barents Sea," Chief of the Main Operations Directorate of Russia’s General Staff Colonel General Sergei Rudskoi said.

"During the exercises, they practiced the tasks of striking targets in Russian territory and intercepting Russian ballistic missiles," he continued. "We view these steps as a provocation although the US side had notified us about the entry of these ships in the Barents Sea on short notice."

Rudskoi also brought up the May 29 B-1B flight to the Black Sea, as well as other Bomber Task Force missions in international airspace around Russia's borders in Europe and the Pacific in recent months. This includes an unprecedented flight on May 21 by one of the bombers into the Sea Of Okhotsk, which is surrounded on three sides by Russian territory and where U.S. military aircraft generally don't venture. The War Zone was first to report on that sortie.

The Air Force has already been projecting combat airpower in the Pacific Region via the B-1Bs and their Bomber Task Force missions in a way not seen in decades, if ever before. The service is now clearly expanding the scale and scope of similar activities, pointed aimed at Russia, across Europe.