The incident follows the American military's release of evidence that Russia has sent combat aircraft to join Libya's civil war. 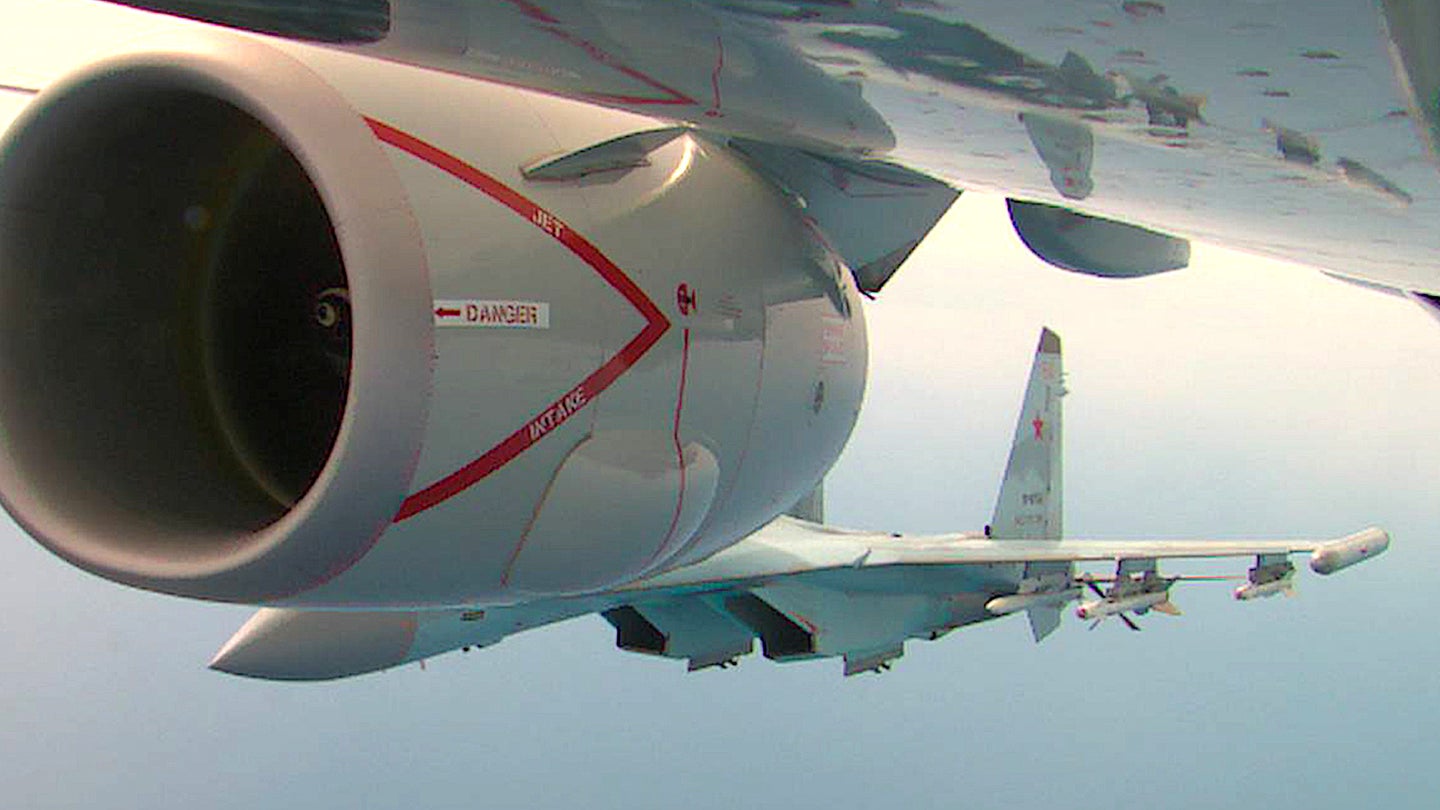 The U.S. Navy has released a video and images showing two fully-armed Russian Su-35 Flanker-E fighter jets flying dangerously close to one of its P-8A Poseidon maritime patrol planes over international waters in the Eastern Mediterranean Sea today. The incident comes after U.S. Africa Command issued a press release, along with images, some of which a P-8A appeared to have captured, showing Russian combat jets making their way to Libya to reinforce mercenaries and other forces fighting there on behalf of rogue general Khalifa Haftar, something The War Zone had already been investigating in depth.

The Navy says that two Su-35s intercepted and flew on either side of the P-8A over a period of 65 minutes. The U.S. Sixth Fleet, which oversees American naval operations around Europe, including in the Mediterranean, said that there had also been two other unsafe intercepts in the general area in April.

The full Navy press release is as follows:

"For the third time in two months, Russian pilots flew in an unsafe and unprofessional manner while intercepting a U.S. Navy P-8A Maritime Patrol and Reconnaissance Aircraft in U.S. Sixth Fleet, May 26, 2020."

"On May 26, 2020, a U.S. Navy P-8A aircraft was flying in the Eastern Mediterranean over international waters and was intercepted by two Russian Su-35 aircraft over a period of 65 minutes. The intercept was determined to be unsafe and unprofessional due to the Russian pilots taking close station on each wing of the P-8A simultaneously, restricting the P-8A’s ability to safely maneuver."

"The unnecessary actions of the Russian Su-35 pilots were inconsistent with good airmanship and international flight rules, and jeopardized the safety of flight of both aircraft."

"While the Russian aircraft was operating in international airspace, this interaction was irresponsible. We expect them to operate within international standards set to ensure safety and to prevent incidents, including the 1972 Agreement for the Prevention of Incidents On and Over the High Seas (INCSEA). Actions‎ like these increase the potential for midair collisions."

"This incident follows two unsafe interactions in April, over the same waters. In all cases, the U.S. aircraft were operating in international airspace, consistent with international law, with due regard for safety of flight, and did not provoke this Russian activity."

Unsafe and unprofessional Russian intercepts of American aircraft are not necessarily uncommon, both around Europe and elsewhere around the world. They're so routine that the Navy had even developed dedicated camera pods for its EP-3E Aries II intelligence, surveillance, and reconnaissance aircraft to capture evidence of similar altercations.

However, the time of this incident, coming soon after the U.S. Africa Command (AFRICOM) statement regarding Russian MiG-29s and other combat jets heading toward Libya, makes it particularly notable. As we mentioned at the start of this article, one or more P-8As were very likely responsible for capturing some of the evidence of those aircraft making their way to the North African country by way of Syria. The multi-role maritime patrol jets spend a lot of time flying racetrack patterns off the Syrian coast where Russia's air base is located in the war-torn country. From there perch they can monitor Russia's actions at the base and around the Eastern Mediterranean.

The already convoluted civil war in that country has become more complex in recent months as Turkey has expanded its involvement in the conflict, something you can read about more in these past War Zone pieces. The Turkish government has become the primary benefactor of the U.N.-recognized Government of National Accord (GNA), which has been fighting for years against strongman Khalifa Haftar and his Libyan National Army (LNA). The LNA enjoys support from Russia, as well as the United Arab Emirates and Egypt, among others.

Haftar recently suffered a major defeat, which appears to have prompted the Kremlin to rush additional reinforcements in the form of advanced combat jets to help the LNA. There are also concerns that this deployment could have broader impacts on regional security, in addition to leading to a worrisome escalation in Libya's civil war.

"If Russia seizes basing on Libya's coast, the next logical step is they deploy permanent long-range anti-access area denial (A2AD) capabilities," U.S. Air Force General Jeff Harrigian, head of U.S. Air Forces in Europe and Air Forces Africa, had said as part of the AFRICOM statement on the Russian combat jets earlier on May 26. "If that day comes, it will create very real security concerns on Europe's southern flank."

This latest intercept in the Meditteranean certainly seems to be a response at least to the U.S. military's efforts to monitor Russia's activities in the region and especially in regards to the country's deepening involvement in the ongoing conflict in Libya.

A video shot from one of the Flankers has now emerged, as well.