It takes great mental fortitude and physical strength to execute one of the USMC’s most challenging missions and it has nothing to do with combat. 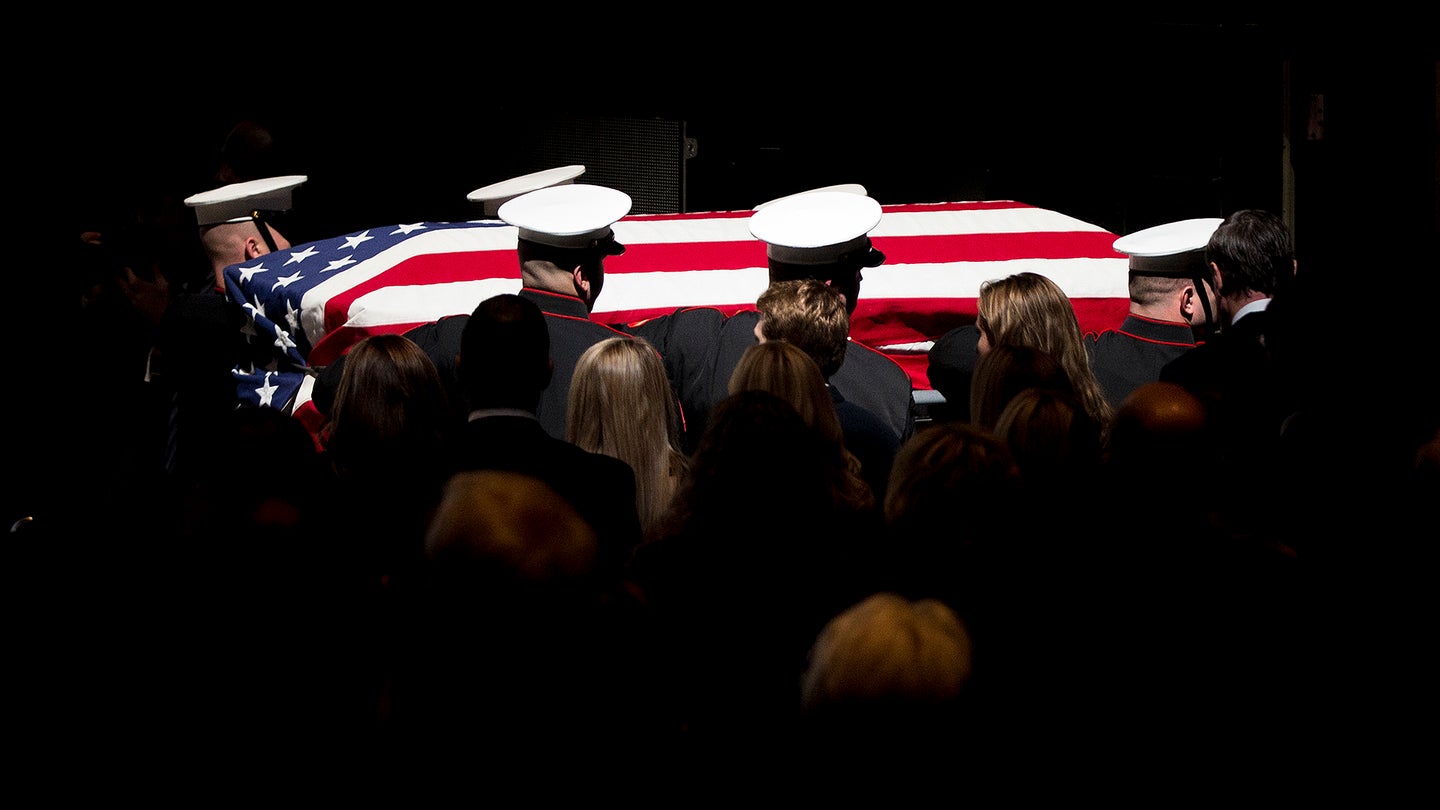 As we remember and thank the men and women who made the greatest sacrifice of all for their country on this Memorial Day, there are a few jobs within the U.S. military in which most days are their own mini-Memorial Days. One of them is the Marine Corps Body Bearer. They act as a rock of stoic stability in a sea of emotion and grief for families and friends who have lost a loved one. It seems like a nearly impossible job. Seeing so much tragedy on a regular basis. But for the elite team of Body Bearers, it is an absolute honor and one that requires focus and strength—both mentally and physically.

The excellent videos below explain just what goes into this solemn position and how hand-selected Marines prepare to execute what is basically a no-fail mission. With just six men instead of usual eight carrying a coffin, they are unable to flinch or show any sign of fatigue or emotion.

The USMC describes just how important and elite the role of the Body Bearer is, stating:

"Company B is home to the Marine Corps’ Body Bearer Section. This elite unit, though small in number, is comprised of hand-selected candidates, who through the crucible of Body Bearer Ceremonial Drill School, honed their minds and bodies to recreate themselves into members of the most elite funeral detail in the United States’ Armed Forces.

The primary mission of the Body Bearer section is to perform flawless funerals for Marines and Marine family members at Arlington National Cemetery and abroad. Additionally, the Body Bearer section is responsible for flawlessly executing a myriad of other ceremonial commitments that include: participating in Presidential, state and joint service funerals, manning the saluting battery of Marine Barracks Washington to render honors to dignitaries, and performing wreath-laying ceremonies across the National Capital Region.

The family is the most cherished and important entity for the Body Bearer Section; flawless funerals are the standard the Section maintains for itself to show to the family the love and respect we have for our fallen Marines and the honor we take in being “the last to let you down”. For this reason, the road to becoming a Body Bearer is one of the most arduous paths one can take in the Marine Corps.

Earning the right to perform the most solemn duty in the Marine Corps is an experience that will humble even the most prepared Marine. Marines in Ceremonial Drill School will be required to demonstrate the character and resolve to progress through the strict training regimen, the bearing to keep one’s composure no matter the circumstances, and progress from a physical strength and conditioning perspective to bear the weight of Marines’ caskets for our fallen heroes and their loved ones. Ceremonial Drill School is a self-paced program, meaning students will progress as quickly or slowly as their mental and physical faculties will allow. The average time it takes to create a Body Bearer typically ranges between six and twelve months.

Earning the title of a Marine Corps Body Bearer is not the light at the end of the tunnel for students, however. Once earning Black and Gold, Body Bearers fight complacency by continuing to improve their strength, perfect their craft in the ceremonial drill they perform, and must continue to perform flawless funerals on a daily basis.

This billet is not for everyone. Marine Corps Body Bearers serve as a tangible, physical manifestation of the institution that our fallen brothers and sisters have poured their hearts and souls into fortifying.  As such, the mental, emotional, and physical toll this responsibility exacts from the Body Bearers as well as Ceremonial Drill School students is immense. That being said, the honor and pride the Body Bearer Section takes in caring for Marines the way they do is one of the most gratifying experiences of their lives."

It really is amazing the dedication and fortitude of the Marines that do this job. Being faced with such sorrow so regularly and being able to compartmentalize it is something that seems superhuman. With that in mind, I am certainly greatful for the USMC Body Bearers and especially for all our fallen heroes that require their services.