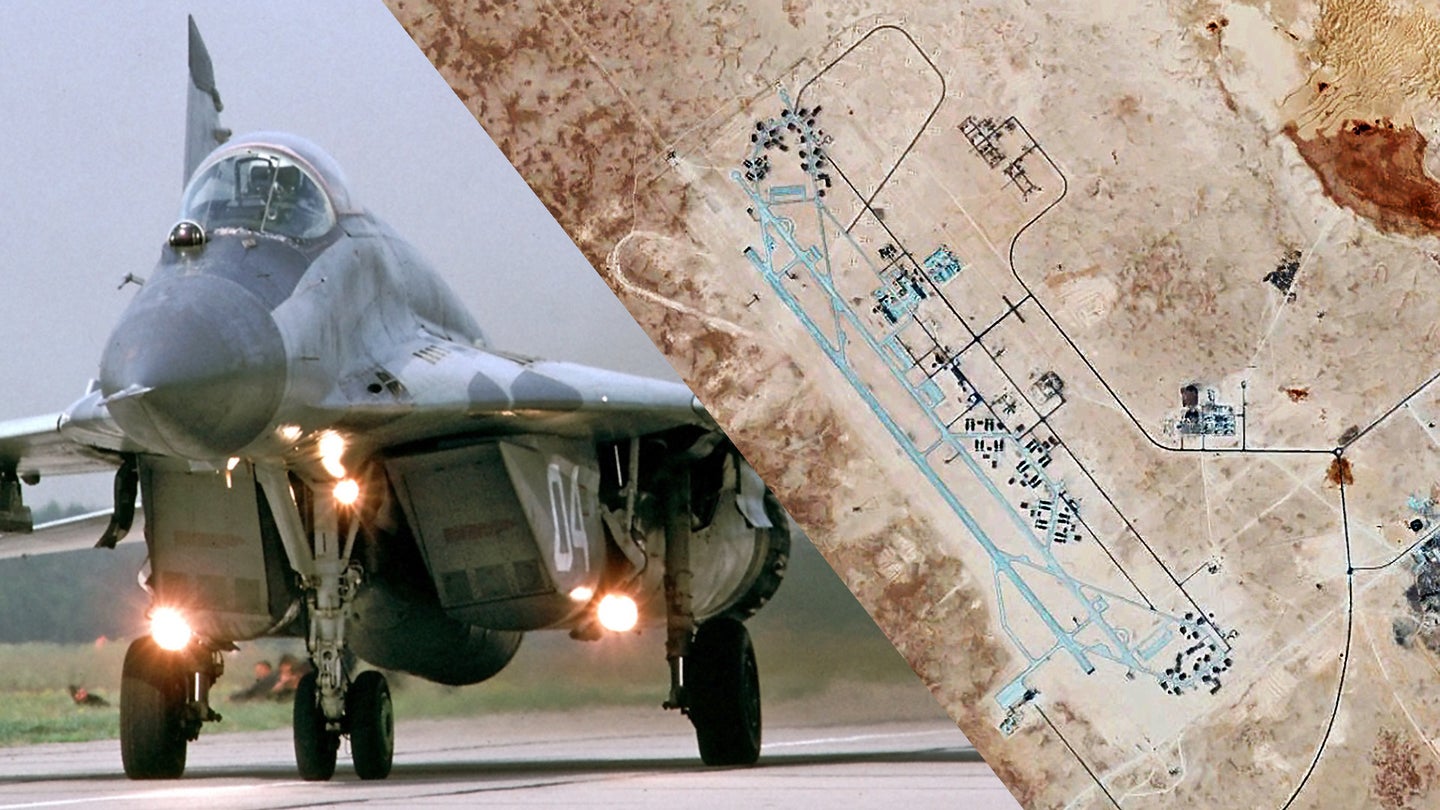 Satellite imagery has emerged showing at least one MiG-29 Fulcrum fighter jet at an air base in Libya under the control of forces aligned with rogue general Khalifa Haftar. This follows reports that six MiG-29s, as well as a pair of Su-24 Fencer combat jets, had recently arrived to join Haftar's Libyan National Army, or LNA.

If true, this could represent a major escalation in the conflict in that country and it comes amid an exchange of threats between Haftar's group and Turkey, the latter of which supports the United Nations-recognized Government of National Accord, or GNA. Just this week, GNA-aligned forces also routed elements of the LNA in the western portion of the country, recapturing a major base along with various weapons and other equipment.

On May 21, 2020, Brian Castner, a weapons investigator on Amnesty International's Crisis Team, posted on Twitter a satellite image taken two days earlier of Al Jufrah Air Base, which situated in the center of Libya, that showed a MiG-29 Fulcrum being towed by a truck along the base's main taxiway. The War Zone is already securing its own satellite imagery of this base to try to further confirm how many of these fighter jets, as well as any other aircraft, may be there.

Fathi Bashagha, Interior Minister for the GNA, which is based in the internationally-recognized capital of Tripoli in western Libya, had said earlier in the day that the half dozen MiG-29s and two Su-24s – he did not specify any particular variants – had touched down somewhere in the eastern portion of Libya after flying to the country by way of Russia's Khmeimim Air Base in Syria, according to Bloomberg. Bashagha also claimed that a pair of Russian Su-35 Flankers had escorted the jets, at least on a portion of their journey.

It's worth noting that Libya, as a whole, is subject to an international arms embargo, but the United Nations has repeatedly found supporters of the GNA and the LNA violating those prohibitions. The GNA's primary benefactor, at present, is Turkey, while Haftar's LNA, which has its main hub in the eastern city of Tobruk and controls much of the rest of the country, enjoys support from Russia, the United Arab Emirates, and Egypt, among others.

Where this newly arrived MiG-29, or any of these other reported arrivals, came from originally, and who might be operating them, is unclear. "It wasn’t clear whether those were refurbished jets that had belonged to Haftar’s airforce or additions to his fleet," Bloomberg's story said, but Libya has never before received MiG-29s of any kind from any source.

The Aviationist noted that there had been unconfirmed reports of six Russian MiG-29s flying to Syria by way of Iran, along with a Tu-154 passenger transport, and that these aircraft could have continued on to Libya. Russia's Tu-154s are similar in function to its Il-62Ms, which have been a typical support aircraft for similar kinds of deployments elsewhere in the world in recent years. Russia has also been a major support of Haftar's LNA in recent years and has reportedly already sent mercenaries to bolster the Libyan strongman's forces on the ground.

Additional reports, also unconfirmed, said that Belarus, a long-time Russian ally and a country that has a history of supplying aircraft to controversial regimes and countries under international arms embargoes, such as Syria, might have supplied the jets. It's also worth noting that there were reports in 2016  that Egypt, as well as Sudan, had provided combat jets to the LNA, helping to replace combat losses and general attrition due to limited maintenance capacity across its already small and diverse fleets after years of conflict. The Egyptian Air Force, which has flown direct combat operations in Libya in support of Haftar in the past, also operates advanced versions of the MiG-29M.

The full scope and origins of the LNA's apparent aerial reinforcements are not clear, nor is whether Haftar's forces are actually operating them or if a third party, such as Russia or mercenaries that Moscow or someone else has supplied, will be flying them. The appearance of a MiG-29 at Al Jufrah would fit with recent remarks from Saqr Al-Jaroushi, head of the LNA's Air Force, that the "largest aerial campaign in Libyan history" was imminent and that Turkey's forces in the country would be “legitimate targets."

Turkey has been ever-more directly embroiled in Libya's civil war since at least May 2019, supplying the GNA with a variety of armored vehicles and heavy weapons, including Bayraktar TB2 armed drones, as well as advisory support.

TB2s played a decisive role in the GNA's recapture of Al Watiya Air Base, which is situated to the west of Tripoli, earlier this week. GNA forces and their Turkish allies notably destroyed or captured eight Russian-made Pantsir-S1 mobile point air defense systems that the UAE had supplied to Haftar's LNA in the last year or so.

It's also interesting to note that Turkish drones decimated Syrian forces, including a number of Panstir-S1s, during a relatively brief skirmish in that country in late February that spilled over into March. The Syrian and Libyan campaigns have both been seen as underscoring previous anecdotal reports that questioned the Pantsir-S1's capabilities, as well as highlighting Turkey's increasing unmanned aircraft capabilities.

With the loss of Al Watiya, Haftar's forces have been decidedly put on the offensive and whoever may have supplied the new tranche of combat jets is undoubtedly looking to help ensure they don't lose any more ground. Positioning the aircraft at Al Jufrah would put them within range of GNA controlled territory in the western portion of the country and help keep them shielded from counterattacks.

Trips to Tripoli and back from the base could be at the edge of the combat radius of the MiG-29s depending on the variants in question. The Fuclrums are also capable of air-to-air combat, so they might not necessarily be tasked with conducting ground strikes and might instead go hunting for the GNA's own varied combat aircraft and the Turkish drones.

Regardless, Turkey's government has already responded in kind to the LNA's threats. "If Turkish interests in Libya are targeted, we will legitimately target the elements of the coup plotter Haftar," a statement from the Turkish Ministry of Foreign Affairs declared.

There are unconfirmed reports now that Turkey may be considering deploying its own combat aircraft to Libya, as well as ground forces. Turkish and GNA officials did conclude an agreement last year, which Turkey's parliament subsequently approved, which included provisions for Ankara to send troops to the country.

There have been numerous reports since then that the arrival of a major Turkish contingent is imminent, but so far, the deployments seem to largely be limited to special operations forces, intelligence operatives, and various supporting elements. Turkish Navy warships have been patrolling off the coast. In addition, Turkey has facilitated the deployment of a significant number of militiamen from Syria to Libya to fight on behalf of the GNA, as well as the curious construction of a so-far-unused airstrip bizarrely located inside a residential development just outside of Tripoli.

There is a definite possibility that the conflict is about to escalate again now and draw in the GNA and LNA's respective benefactors even more directly. At the same time, Russian officials announced earlier on May 21 that it had already been in contact with the Turkish counterparts and that both countries were calling for a ceasefire. Moscow and Ankara similarly brokered a deal to end Turkey's campaign against forces aligned with Syrian dictator Bashar Al Assad in March.

It is worth noting, however, that the two countries had worked to get the GNA and the LNA to agree to ceasefire deal earlier this year. Haftar rejected that proposal, instead choosing to launch his latest failed offensive to try to capture Tripoli.

All told, it remains to be seen what the full extent of the LNA's aerial reinforcements actually is and whether they are a prelude to a new and more serious burst of fighting or if they will provide a deterrent effect against the GNA that leads to at least a temporary pause in the conflict.