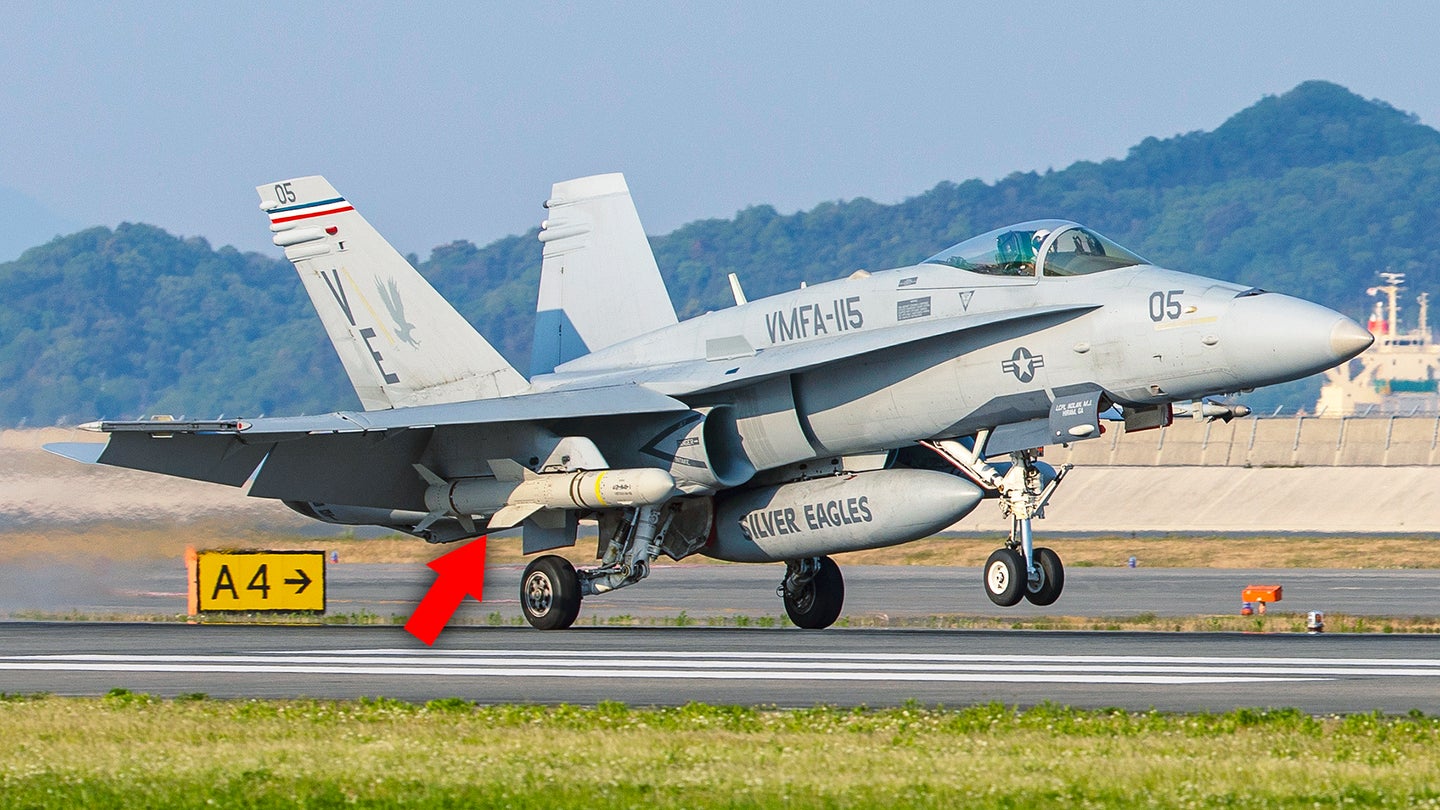 A number of U.S. Marine Corps F/A-18C/D Hornet fighter jets forward-deployed to Japan recently conducted an exercise while carrying a pair of live AGM-84D Harpoon anti-ship missiles. The Corps says that the training event focused on its ability to contribute to sea control and area denial missions, capabilities the service wants to enhance and expand as part of a radical restructuring of its forces that it first publicly announced last month.

Japanese planespotter Seagull-jap4, who also goes by the Twitter handle @miejapan4, posted some of the first pictures of Harpoon-armed Hornets on Apr. 29, 2020, but has since made their account private. The 1st Marine Aircraft Wing, the Marine Corps' top forward-deployed aviation unit in Japan, has since posted a number of official pictures of the exercise online. The War Zone had already reached out for more specific details about the exercise, which signaled to potential adversaries in the region, such as China, that Marine Hornets are ready and able to fly out and counter hostile maritime activities.

The F/A-18C/Ds that participated in the exercise, which took place on Apr. 28 at Marine Corps Air Station (MCAS) Iwakuni, came from Marine Fighter Attack Squadron 115 (VMFA-115) and Marine All Weather Fighter Attack Squadron 242 (VMFA[AW]-242), also known as the "Silver Eagles" and "Bats," respectively. VMFA(AW)-242 is forward-deployed to Iwakuni, while VMFA-115 is presently on a rotational deployment there. Both are assigned to Marine Aircraft Group 12 (MAG-12), which is part of the 1st Marine Aircraft Wing.

"During the exercise, MAG-12 focused on naval missions and simulated anti-ship long-range fires in order to enhance the Marine Corps' ability to effect sea control and denial in the Indo-Pacific," according to the official picture captions. It's not clear if any of the aircraft live-fired their missiles against mock targets.

The exercise certainly highlighted the continued ability of land-based Marine Corps Hornets to go out to an area and contest or defend it against a maritime opponent using the AGM-84D. This version of the Harpoon first entered service since the 1980s and you can read more about this family of missiles in this past War Zone piece.

Other newer and more capable air-launched anti-ship weapons are becoming available, too, and more are in development, including in the classified realm. The Navy has already integrated the more modern AGM-158C Long Range Anti-Ship Missile (LRASM) onto its F/A-18E/F Super Hornets and this could be a future option for Marine Hornets. There are plans to add it to the arsenal of weapons that all three variants of the F-35 Joint Strike Fighter can carry externally.

Raytheon and Norwegian defense contractor Kongsberg are also working on integrating the Joint Strike Missile (JSM), a multipurpose air-launched weapon based on Kongsberg's surface-launched Naval Strike Missile (NSM), which is now entering U.S. Navy service, on the F-35A. This could be another option for both Marine Hornets and Joint Strike Fighters, though the space limitations of the internal bays on the Corps' F-35Bs could preclude internal carriage of the weapon.

Beyond that, ever-improving networking and data-sharing capabilities will steadily expand the ability of Marine combat aircraft to pass targeting information between each other, as well as with other assets in the air, at sea, and on the ground, including those from other branches of the U.S. military or allied or partner forces during coalition operations. This will enable Marine jets to engage targets outside of the range of their own sensors and while staying as far away as possible from hostile threats, something that is particularly important as times goes on for the non-stealthy F/A-18C/Ds.

The Marine Corps also says that the exercise at Iwakuni was "in-line with Force Design 2030." This is a recently released force structure concept, which you can read about more detail in this past War Zone piece, that centers on expeditionary and distributed operations concepts that sees future Marines missions, especially in the Pacific, involving rapidly establishing austere outposts, occupying them for a limited period, and then shifting position in order to knock opponents off balance and make it more difficult for them to respond both offensively and defensively.

A key focus of the force structure plans is expanding existing long-range anti-ship capabilities and acquiring new ones, such as land-based Tomahawk cruise missile launchers, so the aforementioned Marine outposts can contribute more to broader maritime operations.

"Part of the homework that the Navy and Marine Corps done over the past six months is how we think we are going to need to operate in the future as an integrated naval force and that means the Marine Corps assumes a role that we have not had in the past 20 years which is how do we contribute to sea control and sea denial," U.S. Marine Corps Commandant General David Berger told members of Congress in March. "What we need is long-range precision fires for a small unit, a series of units that can from ship or from shore hold adversaries’ naval force at risk."

Berger was specifically talking about the need for the ground-launched Tomahawks, but it's not hard to see how this same thinking would apply to Marine aviation units, as well. Increasing the emphasis on the anti-ship capabilities of the Marine Corps' land-based combat aviation units is well in line with the overall concepts outlined in Force Design 2030, as well as the equally ambitious planning guidance that the Commandant released last year, which you can read about in this previous War Zone story. The Marines are not alone in having an increased interest in anti-ship operations, either, with the Navy, Air Force, and Army all looking to expand their capabilities in this regard.

Force Design 2030 doesn't specifically mention any particular potential adversary by name as the prompt for this need for more anti-ship capabilities, but Berger did mention China numerous times in his 2019 planning guidance. The ballooning size of that country's navy is one of, if not the primary driver behind this shift in focus. The Office of Naval Intelligence (ONI) expects the People's Liberation Army Navy's (PLAN) major surface and submarine fleets to exceed 400 hulls by 2030, according to a document it prepared in February for members of Congress that the Federation of American Scientists recently obtained via the Freedom of Information Act.

China is producing large and more modern warships, including aircraft carriers, amphibious assault ships, and other major surface combatants, as well as both nuclear and advanced diesel-electric submarines, at a prodigious rate. ONI's projected PLAN fleet total notably also doesn't include around 85 anti-ship missile-armed patrol craft that could pose a threat to American warships. The country is making strides in developing advanced weapons and other systems to go on those ships, too.

"Chinese ship design bureaus and shipyards use modern software, design practices, machinery, and ship construction methods comparable to those used at U.S. shipyards," according to ONI. "Chinese naval ship design and material quality is in many cases comparable to USN ships, and China is quickly closing the gap in any areas of deficiency."

The U.S. Navy, which has struggled to meet a long-standing goal of acquiring a 355-ship fleet, is in the middle of a protracted effort to develop its own new force structure plan. No matter what, the comparable size of what it calls its Battle Force is likely to be substantially smaller by the end of the decade. As such, finding additional and alternative means to counter China's growing quantitative edge has become all the more important.

Tensions between the United States and China have been ratcheting up in recent years over a host of different issues, especially with regards to Beijing's expansive territorial claims in the South China Sea. This has led to a number of altercations between American and Chinese forces, including a near-collision between a U.S. Navy destroyer and a PLAN one in 2018. Friction between the two countries has grown again recently over aggressive Chinese responses to commercial ships from other countries operating in areas of the South China Sea that Beijing says are its sovereign territory. This month, Navy warships have also conducted a number of so-called Freedom of Navigation Patrols in that region, as well as the Strait of Taiwan, to challenge Chinese claims, which have drawn the ire of that's country's authorities.

It is worth noting that the U.S. military as a whole has concerns about the vulnerability of land-based combat aircraft, especially those operating from known, fixed bases, such as MCAS Iwakuni, during any future high-end conflict, including against China in the Pacific. The U.S. Air Force is now exploring new and improved concepts for rapidly establishing fixed-wing aviation operations at austere sites, which is something the Marine Corps will also have to consider. It's F-35Bs, of course, do offer the benefit of being able to take off and land vertically, allowing for runway independent operation, something that is set to only become an even more important component of the service's concepts of operation.

As the Marines refine and implement their Force Design 2030 plans, more information about these concepts of operations is likely to emerge. At the same time, anti-ship focused Marine combat aviation exercises, such as the recent one at MCAS Iwakuni, look set to become a much more routine sight.