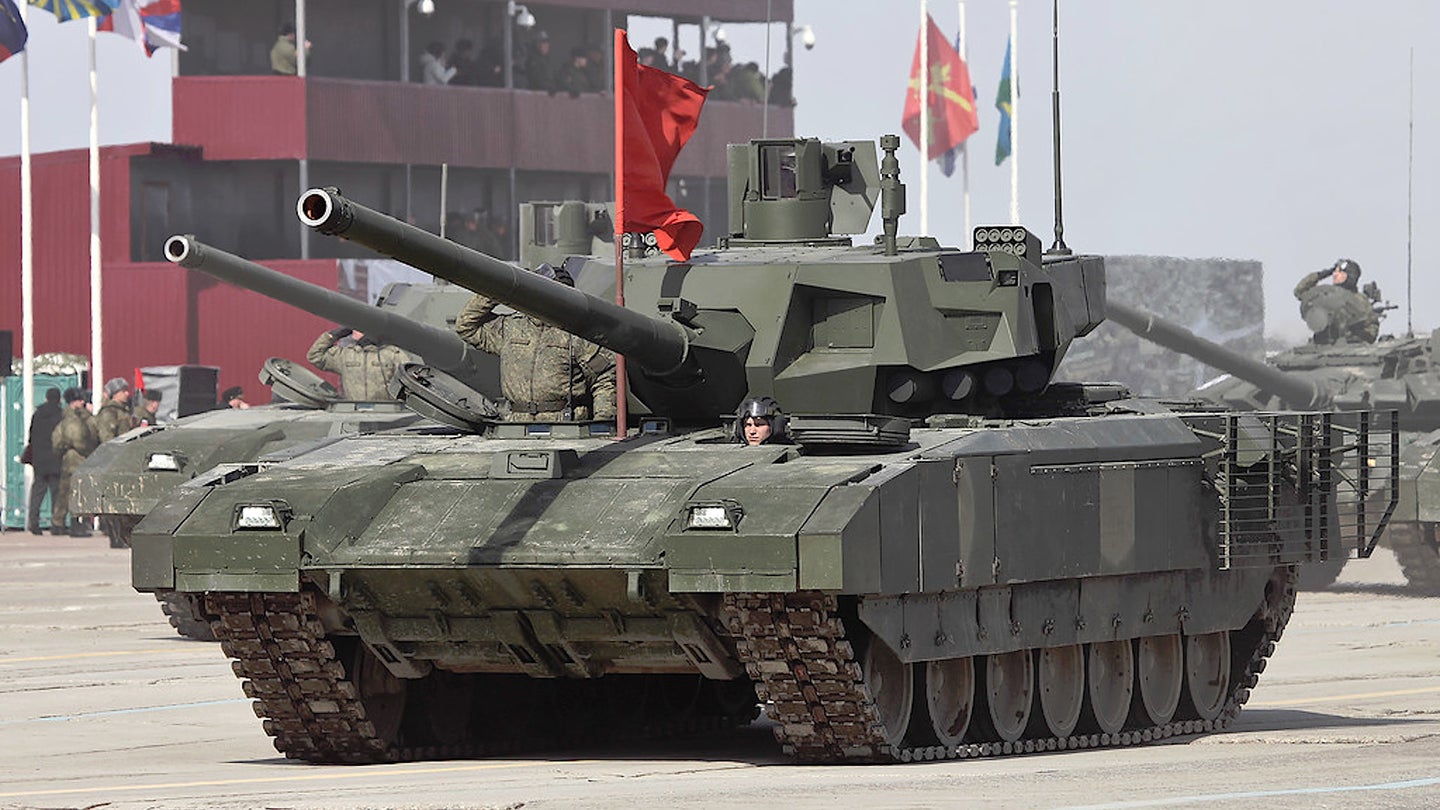 A Russian government official says that the country field-tested its T-14 Armata main battle tanks in Syria, which, if true, would be the type's first trip overseas. The Kremlin has long used the Syrian conflict as an opportunity to test new weapons and other military equipment, but it's unclear how rigorous the testing of the T-14s in the Middle East actually was, if it even occurred.

Russian Minister of Industry and Trade Denis Manturov made the comments about the T-14s in Syria on Apr. 19, 2020, in an interview with Nailya Asker-Zade on Deistvuyushchiye Litsa, or "Political Actors," a program on Russia's state-owned Rossiya-1 television channel. Alexander Potapov, CEO of the state-run T-14 manufacturer Uralvagonzavod, had told the Vedomosti newspaper in February that his company would deliver the first production batch of T-14 tanks sometime this year.

"Yes, that’s right. They [Armata tanks] were used in Syria," Manturov told Asker-Zade. "They were used in field conditions, in Syria, so, we took into account all the nuances."

The Minister offered no additional details about when or where in Syria the trials had taken place, how many total tanks were involved, and what the testing consisted of, specifically. There has been no word, as yet, from the Russian Ministry of Defense confirming the deployment or offering any additional information.

However, with the exception of the small numbers of BMPTs, Russia has not previously sent heavy armor like the T-14s to Syria for its own use. Even if some number of T-14s did go to the country, it's also very possible that the Russian military limited their actual use in order to curtail the potential for accidents or actual combat losses.

Militant groups and terrorists who have been fighting the regime of Syrian dictator Bashar Al Assad, who relies heavily on Kremlin support to remain in power, have made good use of guided anti-tank missiles throughout much of the conflict, which first began 2011, and continue to do so. The T-14 does feature improved passive armor over older Russian tanks and has an active protection system specifically intended to defeat anti-tank missiles and shoulder-fired infantry anti-tank rocket. The design is also intended to make the crew less vulnerable by positioning them all low inside the hull and using an unmanned turret. However, there would still be a possibility that a confluence of factors could lead to a damaged or disabled tank, either of which would be extremely embarrassing for Russian authorities and a likely propaganda coup for anti-Assad groups.

Similarly, in 2018, the Russian Air Force notably sent a pair of its pre-production Su-57 advanced combat jets to Syria, but only for a matter of days. Satellite imagery later showed that at least one of the aircraft sitting at Russia's Khmeimim Air Base outpost surrounded by sandbags to protect it from militant attacks. In December 2019, General Valery Gerasimov, Chief of the General Staff of the Russian Armed Forces, said Su-57s had returned to the Middle Eastern country for another deployment, but did not say when specifically that had occurred and otherwise offered very limited details.

Sending the T-14s to Syria, no matter how briefly, could still be valuable for Russia's own propaganda purposes and otherwise to demonstrate the country's continued to commitment to the advanced tank project despite its persistent troubles. Russia first publicly unveiled the T-14 in 2015 during the annual May Victory Day parade, which commemorates the country's victory over Nazi Germany in World War II, and announced plans to purchase thousands of them by the end of this year.

Various issues, particularly the Armata's high cost compared to other existing designs, threw a wrench in these plans and Russia now only expects to buy around 100 in the initial production batch. In 2019, Russia notably took delivery of more World War II-era T-34/85 tanks, obtained from Laos to use for parades and other promotional events, than T-14s. The Russian Army continues to receive larger numbers of upgraded variants of the Soviet-era T-90, T-80, and T-72 series, as well.

In his interview on Deistvuyushchiye Litsa, Manturov expressed hope the T-14's costs would come down as serial production expanded. "It [the T-14 Armata tank] is expensive because it is still undergoing extra trials and modernization after the defense ministry requested additional technical solutions in order to begin serial supplies starting from the next year under the existing contract," he said.

The Minister also talked about potential export orders, which could further help drive down unit costs, and said that there were "preliminary orders," but declined to talk about who those possible customers might be. "Next year, when serial supplies of these tanks to the defense ministry are launched and an exports [sic] certificate is obtained, we will begin to work with foreign clients," he added.

Being able to say the T-14 has been "combat-proven" or otherwise employed successfully in Syria would help the Kremlin in marketing the tanks abroad.

Whether or not Russia's own production plans for the T-14 come to fruition remain to be seen, regardless of any Syrian deployment. The country's defense budgets have seen regular cuts in recent years and the Kremlin has often shifted money around to meeting morphing priorities, especially in financing high-profile strategic weapon systems, including hypersonic missiles, controversial nuclear-powered and nuclear-armed cruise missiles, and ultra-long-range torpedoes.

A drop in the global price of oil in 2014 had had significant impacts on the Russian economy, overall, and Russia and Saudi Arabia had just recently engaged in a new oil price war. U.S. diplomacy helped ostensibly bring an end to that spat. Unfortunately, just today a U.S. oil futures contract collapsed, with its price per barrel dropping below zero dollars, the first time this has ever happened. This highlighted serious volatility in the global oil market, especially because of the ongoing COVID-19 pandemic.

It will certainly be interesting to see what other details about the T-14's supposed reported trip to Syria actually entailed and what impacts it might actually have on the tank's future production and fielding.